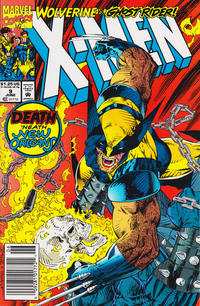 In a Nutshell
The X-Men battle the Brood-possessed Ghost Rider.

Plot
The X-Men & Bella Donna battle the Brood and the Brood-infected Ghost Rider until the floor of the chamber collapses, separating them. As Gambit & Bella Donna reconcile, Beast & Wolverine battle Ghost Rider, noting that for all the Brood says to the contrary, he passed up an opportunity to finish them off. Elsewhere, Jubilee & Rogue discover a group of captive Guild members, waiting to be transformed into Brood, when they're attacked by Ghost Rider. Psylocke & Bella Donna enter Ghost Rider's mind, and with the help of the lingering essence of Dan Ketch, Ghost Rider's most recent host, they're able to purge the Brood, though the act of doing so kills Bella Donna. Gambit gives her body to the freed members of the Assassins Guild, telling them to take her home, then joins the X-Men and Ghost Rider to seek out the Brood for vengeance.

Firsts and Other Notables
Bella Donna dies this issue, overwhelmed by the strain of helping Ghost Rider fight off the Brood possession, shortly after she and Gambit reconcile, leaving her in the perfect position to not stand in the way of the blossoming Gambit/Rogue romance but to allow the memory of her to prolong and complicate that romance. She will, of course, be back, but never really develops into much of a recurring character outside of her connection to Gambit and the Guild mythology. 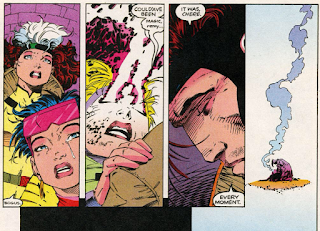 The Brood mention they were drawn to targeting the children of the Guilds because they've been programmed for decades (by some force other than the Brood; the Brood are merely taking advantage). I'm not sure anything ever comes of this notion (though if it does, I imagine it's in one of Gambit's limited series), but it does offer some cursory explanation for the Brood's presence in New Orleans (but not how/when they got to Earth or if they're at all connected to the Brood the X-Men fought in Uncanny #232-234). 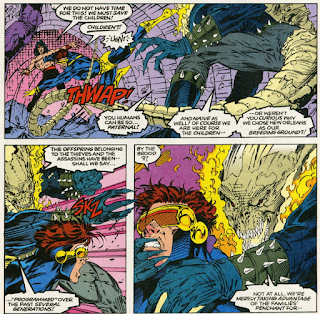 A Work in Progress
At the site of the Brood-transformed Ghost Rider, Jubilee jokes about joining the New Warriors; she will in fact join a later incarnation of the team post M-Day/Civil War.

Bella Donna's powers are shown to be something along the lines of "shoots energy" and "vaguely telepathic", though the narrative does hang a lampshade on their randomness/plot convenience. It's also mentioned that she acquired her powers somehow, rather than being born with them as a mutant. 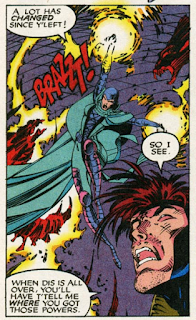 It's said that Jubilee is not technically one of the X-Men at this point.

Wolverine, who has personally repelled a Brood transformation twice, is once again insisting that such transformations are permanent. And by issue's end, he's proven wrong, as Ghost Rider is freed of Brood possession and returns to normal.

Beast is accused of babbling, something to which he takes offense. 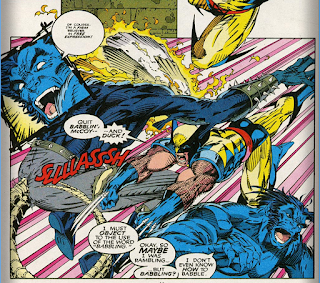 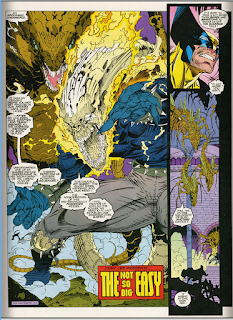 The issue ends with another pinup of the X-Men poised for action. 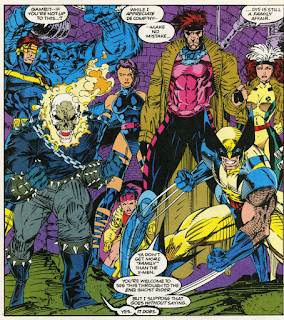 Young Love
Gambit & Bella Donna reconcile their differences and express their feelings for one another, just in time for Bella Donna to die.

Psylocke continues to flirt with Cyclops, mid-battle this time. 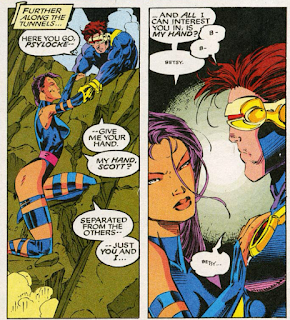 It's in the Mail
Augie de Blieck has a letter in this issue, and it's said that Psylocke will visit Captain Britain in issue #12 (this visit is actually shown in Excalibur, with Psylocke simply absent from issues #12 and #13).

Austin's Analysis
If you can turn off your brain ("there's no catacombs under New Orleans! Where'd the Brood come from?") and get past the near-impenetrable "Cajun" dialogue scattered throughout (at one point, "interrupt" is abbreviated as "'trupt"), this is a lot of fun. It's a big dumb sloppy fight issue, but there's nothing wrong with that on occasion, especially one drawn by Jim Lee (and looking a little bit sharper than he did in the previous issue). And for as much as Wolverine dominates the cover (and gets in some licks), Lobdell and Lee manage to give everyone a moment in the spotlight, even Beast & Jubilee, with Bella Donna, Psylocke and Dan Ketch ultimately defeating the Brood-possessed Ghost Rider. Plus, they manage to sneak in a legitimately funny running gag involving Beast's propensity for babbling. It's not high art, but it gets the job done. Sometimes, that's okay.

Next Issue
Tomorrow, Excalibur goes prehistoric in Excalibur #51. Friday. Wolverine goes to Japan in Wolverine #55. Next week, the story concludes in Ghost Rider #27.