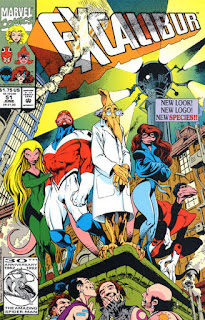 In a Nutshell
The Dinosaur Excalibur of Earth-99476 works to returns some lost humans to Earth-616.

Plot
The Excalibur of Earth-99476 meets with WHO regarding a group of mammals that arrived on their world from Earth-616, and were recently kidnapped by the High Evolutionary and taken to the Savage Land. Meanwhile, on Earth-616 in Brighton, the mammals' saurian counterparts suddenly revert to more primitive forms. The Saurian Excalibur arrives in the Savage Land, accompanied by Dr. Lykos, while Dai Thomas is called in to deal with the now-rampaging dinosaurs, watched by a morose Gatecrasher, who vows revenge on Excalibur. On Earth-99476, Excalibur battles a brainwashed Fantastic Five and learn that the High Evolutionary plans to use the kidnapped humans to stabilize his artificial race of humans, whom he believes genetically superior to the Saurians. But Lykos destroys his machinery, prompting the Evolutionary to vanish and the Fantastic Five to regain their senses. As Dai Thomas attempts to call the exhausted Excalibur of Earth-616, the humans are taken back to the Saurian WHO, where a means of returning them home is devised. Excalibur and the Fantastic Five arrive on Earth-616 in the midst of the dinosaurs' rampage. They corral the dinosaurs through their portal, saying that the pollution on Earth-616 caused their transformation. At Braddock Manor, Excalibur wakes up to news of the dinosaur attack, as well as a message from Jean Grey saying she and Professor X are on their way to help Rachel.

Firsts and Other Notables
This issue follows up on a dangling plot thread from issue #9, in which a group of tourists disappeared from the Tower of London, and a group of sentient dinosaur tourists took their place. It is told mostly from the perspective of the Excalibur from that dinosaur world, labeled here as Earth-99476. 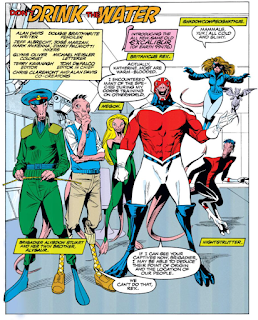 In addition to Excalibur, we see dinosaur counterparts to Dr. Karl Lykos (Sauron), Ka-Zar, the High Evolutionary, and the Fantastic Five (ie the Fantastic Four plus Spider-Man).

Though it debuted last issue, the cover calls attention to the series' new logo, something I failed to do in last issue's post.

This issue's cover is an homage to issue #1 of the series, with the Dinosaur Excalibur in place of the original.

A Work in Progress
Gatecrasher, exiled to Earth by Saturnyne, pops up briefly, talking to an apparent hallucination of Hardcore Henry. 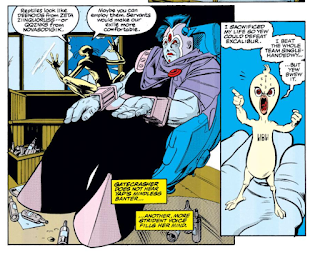 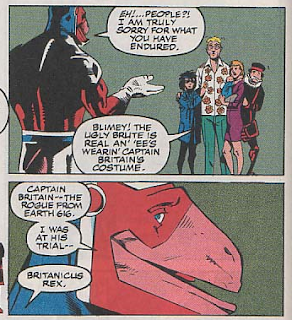 Captain Britain tells Kylun and Cerise they're welcome to stay at Braddock Manor (Feron remains as well, watching over the comatose Rachel in the hopes of claiming the Phoenix Force from her when she dies), though I'm not sure if this counts as them being formally inducted into Excalibur. 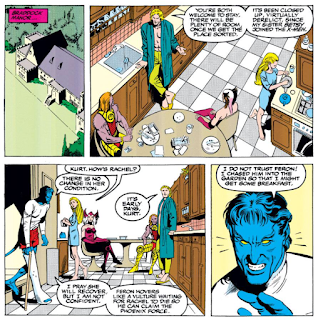 The Reference Section
The exchanged tourists are named the Griswalds, the same name as the starring family of the various National Lampoon's Vacation movies featuring Chevy Chase. 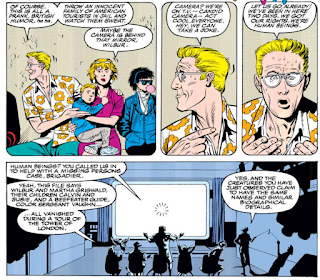 The Grim 'n' Gritty 90s
Dinosaur Excalibur imparts an environmental message by the end of the issue, with the high level of pollution in the air of the main Earth being a plot point. While the points made about the importance of reversing environmental decline remain, sadly, as prescient today as they were then, the whole thing still have a very early 90s/Captain Planet vibe to it.

Austin's Analysis
Taking a break both from the big, sweeping cosmic events of the last few issues and from penciling duties, this issue still finds Alan Davis in "tie up loose ends" mode, this time reaching all the way back to issue #9 of the series to follow-up on dinosaur people who exchanged places with a tourist family while Excalibur battled their alternate reality Nazi counterparts. The end result could come across as, essentially, yet another chapter in the "Cross-Time Caper", showing an alternate world complete with alternate heroes and villains and a threat to combat that is ultimately meaningless because it's all happening on another world but, despite my better judgement, I kind of enjoyed this.

It helps that Davis commits fully to the dinosaur iteration of Excalibur - this isn't so much Excalibur interacting with an alternate world as it is a story about characters from an alternate world, a small but important distinction. The fact that the "real" Excalibur only appears, briefly, in the middle of the story (with everyone asleep) and at the end (mostly just to setup the next issue) without ever having any impact on the events, is to the story's benefit, as is the fact that it's told mostly from the perspective of the dinosaur Excalibur. This is the kind of quirky story that is this series' bread-and-butter, and while it certainly would have been better drawn by Davis, it's still fun, both fluffy and serious enough. Were this just another whacky one-off alternate reality story, it'd be interminable, but tying it in to the history of the series to wrap up a dangling thread gives it just enough narrative import to buoy up the more zany and farcical elements.

Next Issue
Tomorrow, Wolverine goes to Japan in Wolverine #55. Next week, the X-Men are still in New Orleans in Ghost Rider #27, and Excalibur reaches the XX Crossing.