The Walking Dead 7x01: The Day Will Come When You Won’t Be 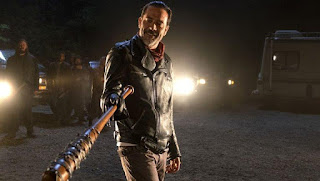 The Walking Dead is back with a new season! Yay?

No, they were excited to see what main character was going to die. Frankly, I can’t think of a better descriptor of The Walking Dead than that.

I’ve talked about the tiring, oppressive, relentless nihilism of The Walking Dead before and I’m sure I will again. But let’s focus the man this episode introduced us to: Negan.

Negan arrives on the scene and (after a big, villainous speech, of course) kills Abraham. Daryl objects and as a lesson to him, Negan kills Glenn. This is supposed to establish Negan as the mother of all villains. Unfortunately, killing main characters only establishes you as an uber-villain if you’re not in a TV series where main characters are killed all the time.

Something more is wrong with Negan, though. He’s supposed to be in charge of this big bad ass army but, frankly, I don’t buy it. Negan’s plan is to use his might to scare other colonies into giving him and his army a portion of their resources. A simple extortion scheme. I get that. However, I have two issues.

The first issue is about who Negan decides to kill. Negan kills Abraham and I kind of get that. He’s a big strong tough looking do. Doesn’t hurt to get him out of the way. But why kill Glenn when Rick is clearly the correct option to be offed?

Negan focuses on trying to “break” Rick (and apparently succeeds) but why go through all that effort? Wouldn’t the smart play, if you’re trying to annex all these colonies by force, be to kill the leader (Rick) and then put one of your men in charge (maybe with some extra bodyguards)? Then you have someone you can trust running this new colony instead of someone you're just hoping you've made subservient to you.

Instead, Negan wants to go down the risky path of psychologically breaking someone down. After putting them through some trials he sends them on their way hoping they just do what they’re told. And he expects them not to immediately plot against him once his men leave?

So, why did Negan opt for psychologically torturing Rick instead of just replacing him? Well, I’d say because he’s a sociopath but that’s only half true. Many sociopaths would bash Rick’s skull in and replace him. They just wouldn’t feel bad about it. No, Negan isn’t just a sociopath. He’s a sadist.

You know what? It’s fine to have a villain who’s a sadist. Everyone loves the Joker. Someone who enjoys causing pain for the sake of causing pain can make for a good foe. But this leads into my second problem I have with Negan. If Negan is a pure sadist, why would all these people follow him? (I could ask the same about the Joker...and I have.) He’s a dude with a bat wrapped in barbed wire, a leather jacket and access to some post-apocalyptic hair gel. Those are pretty thin credentials for being a gang leader.

I mean, sure, sadists have wielded power before. But usually those people initially ascend to power through predetermined means, like birthright. Or they at least knew enough to hide their sadism. And usually these sadists are surrounded and protected by people who know he’s crazy but are also in positions of power and luxury and thus want to protect the sadist so they can protect their own status in life. I haven’t seen much evidence that Negan’s lieutenants are living the good life, but I guess maybe we'll see evidence of it in future episodes.

But why, in the world of The Walking Dead, would so many people get behind a guy who takes glee with indiscriminately bashing in the heads of some people in and mentally torturing others? Sure, I could see a few crazies getting behind him, but an entire army of ultra-stealth ninjas? I’m just not buying it.

Maybe The Walking Dead will explain Negan’s backstory and how he garnered such a following. Maybe they’ll explain why none of his followers ever decided to just off this psychopath and run the gang themselves with a little bit more of a level head. But I’m not holding my breath that we'll get these answers.

In the end, I think The Walking Dead simply sees Negan as a cool villain who can use a barbwire-wrapped bat to kill people in gruesome ways. Awesome! But it shouldn't surprise me that that's all these writers want out of a villain because that’s all The Walking Dead is. Waiting to see which character dies next.

Other Thoughts:
My first thought was I wasn't sure I can handle an entire season of Negan. The I realized...it might be more than just one season!

I feel like Rick had plenty of opportunities to kill Negan.

Did Negan throw the hatchet on top of the bus or did it get up there by some other means? I lost track.

Oh, a villain who likes to make grandiose speeches and gestures to prove a point to a single person. How original.

They really teased someone getting Governored but I was skeptical. I doubt they want to spend the time and money to have a regular character missing a hand.

I was happy to see Carl give Rick the OK to chop of his hand, though.

I was wondering how, regardless of Rick's success, Negan planned to make it out of the zombie horde he drove them into. Apparently, I didn't count on Negan having infinite bullets.

So, to keep the secret of who dies, they filmed every character getting killed by Negan. I guess they didn't want to waste that time and effort so they added some of those to Rick's hallucination...which were in the same format as his flashbacks...which led to some confusion on my part.

I will say, since everyone knew A person was dying, adding a second death was a good way to garner some shock from the audience.

If Negan put half the effort he puts into getting "tributes" from different colonies into just gathering resources himself he'd probably be doing a lot better than he's doing right now.