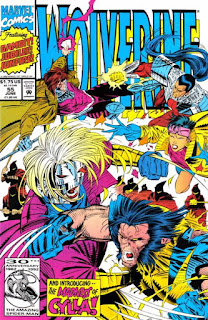 In a Nutshell
Wolverine & Gambit go to Japan to bail out Jubilee.

Plot
Wolverine & Gambit board a plane for Japan, though they're forced to call Nick Fury for authorization due to Wolverine's metal bones. That call alerts the cyborg Cylla to Wolverine's whereabouts. In Japan, Jubilee uses her power to fend off a pair of fellow inmates, causing one of the inmates to recognize her and alert the Hand. When Wolverine & Gambit get off the plane, they're attacked by Hand ninjas sent by Matsu'o, who calls Mariko to confirm Wolverine isn't in the country at her behest. Wolverine & Gambit arrive at the police station just as Jubilee is driven away in a police van. Inside the van, Jubilee is joined by Reiko, who has been sent to kill Jubilee by Matsu'o in exchange for restoring Reiko's eyesight. At the station, Cylla attacks Wolverine, just as Sunfire arrives ahead of more Hand ninjas. He & Gambit fight the ninjas while Wolverine battles Cylla. Meanwhile, Reiko learns Jubilee is a friend of Wolverine's, so she releases her, saying that her debt to him is thus repaid. As she leaves, Jubilee is met by Wolverine's old friend Yukio.

Firsts and Other Notables
Mariko Yashida, Wolverine's long-time if estranged girlfriend, appears in this issue, making it her first appearance in Wolverine's solo series (she last appeared in New Warriors #20, and before that, X-Factor #63-64). No comment is made regarding Wolverine's "return to life" after his apparent death in Uncanny X-Men #227 (though we never saw any reaction from Mariko regarding that death, either). 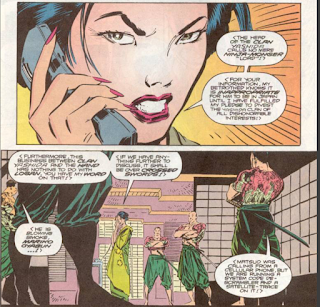 This issue features the debut of the final look of Cylla (ostensibly the new Skullbuster), the pilot injured by Fenris in Uncanny X-Men #260 and rescued by Donald Pierce, then turned into a cyborg. She was last seen briefly helping Lady Deathstrike escape from Fitzroy's Sentinels in Uncanny X-Men #281, but this issue represents her default look moving forward, as she becomes a semi-recurring antagonist of Wolverine (she says she's fulfilling her vow to Pierce of destroying Wolverine in exchange for making her a cyborg, but it's unclear why she's bothering now that Pierce is dead). 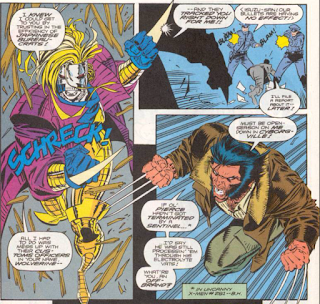 Reiko, the assassin in the employ of the Yakuza in the first Hama/Silvestri story in issues #31-33, returns this issue, tasked with killing Jubilee by Matsu'o (who is also on hand). 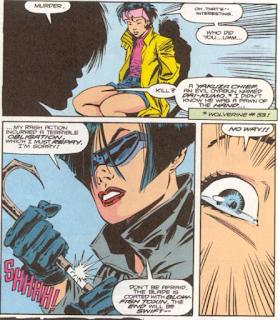 We're in Japan, so Sunfire shows up (wearing his Portacio-designed costume from Uncanny #284 and called "Shuro" instead of Shiro in dialogue), as does Yukio, Wolverine & Storm's Japanese playmate. 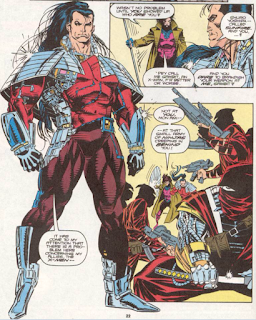 Gambit also guest stars in this story, for no real clear reason.

This marks the beginning of Marc Silvestri's final story as the series' regular artist, as he too leaves to co-found Image Comics after issue #57.

The Chronology Corner
This issue follows on directly from issue #53 (which ended with Jubilee in Japanese jail), and thus takes place after "Male Bonding" in Marvel Comics Presents and between X-Men #7 and #8 for Wolverine, Jubilee and Gambit.

A Work in Progress
Wolverine gets put through the ringer trying to get through airport security as the issue opens, due his adamantium bones. It's mostly play for laughs, but in the past, Wolverine had a medical ID card that excused his setting off of the metal detectors due to implants (here, they end up getting Nick Fury on the phone to clear him). 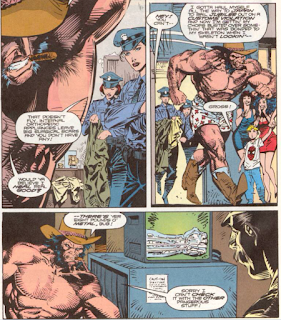 Also, he and Gambit are flying commercial to Japan, rather than taking a Blackbird.

The Hand ninjas in this story are in their armored, more modern forms, as seen in X-Men #4-7.

Cylla claims that she is Pierce's "production model", that all previous Reavers, including Lady Deathstrike, were functionally prototypes compared to her capabilities. 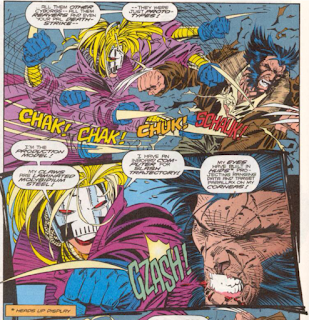 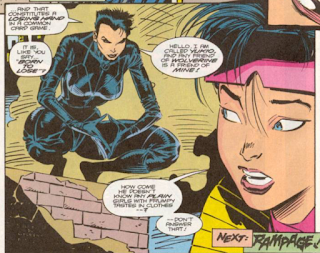 Austin's Analysis
This issue kicks off a three part story that brings Wolverine back to Japan for the first time since the very first story of the Hama/Silvestri run (a story that gets explicitly referenced thanks to the presence of Reiko), thus creating a nice bookend for Silvestri's run (Hama, of course, will remain on the series for quite some time yet). Even beyond Silvestri's departure, it will ultimately become something of a turning point for the character by the end, but for now, this is mostly setup, getting Wolverine to Japan and introducing the antagonists in the forms of Matsu'o & Cylla.

Hama has, over the last few arcs, done an effective job of creating ad hoc supporting casts for Wolverine to bounce off of - Puck in the Spanish Civil War story, then Storm, Albert & Elsie Dee, Mystique & Spiral more recently, etc. Here, we get Sunfire & Yukio (because it's Japan, of course), and Gambit, because of...reasons. His presence is the most out-of-place (as popular as the character may be at this point, it's hard to think Wolverine's solo book needed a sales boost), particularly because the quasi-antagonistic, old vet vs. cocky new kid on the block rivalry they had started to develop under Claremont never really shows up. Instead, Gambit's just...there, threatening to clutter up an otherwise busy story for no good reason.