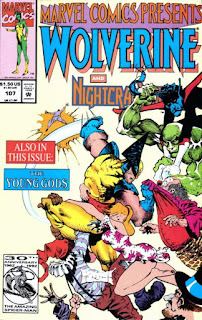 In a Nutshell
Wolverine & Nightcrawler try to save the Neuri from Nightcrawler's former circus.

Plot
Wolverine tracks down Nightcrawler, who is working with his old circus, the Jahrmarkt. Nightcrawler is approached for help by a young boy with a monstrous appearance. He tells Nightcrawler he is a member of a race of creatures who live peacefully in secret with humanity, having sworn off violence, but that they are now being executed. However, the boy suddenly bursts into flame and is killed. Jutta, a member of the circus, theorizes that his own people killed him for breaking their code of silence, prompting Wolverine & Nightcrawler to track down his people. Initially, they attack, believing them responsible for the child's death, but their non-violence surprises them, and it's revealed that the real villains are Jutta and her fellow circus performers, who have all been genetically modified and want to wipe out the creatures, whom they blame for the death of Nightcrawler's brother. The creatures, who say they are part of the Neuri, retreat into a nearby castle, which is set on fire by a mob of angry villagers. As Wolverine defeats the Jahrmarkt, Nightcrawler attempts to free the Neuri, but they say it is time for them to exit this plane of existence. Nightcrawler returns to Wolverine, pondering if humanity will ever learn that not all "monsters" lack humanity, just as humanity as no lack of its own monsters.

Firsts and Other Notables
This story marks the first direct interaction between Wolverine and Nightcrawler since Nightcrawler left the X-Men to recuperate from the Morlock Massacre and helped found Excalibur in the wake of the X-Men's apparent death, and the subsequent reveal that the X-Men faked their deaths (Excalibur #41 hinted that Excalibur had made contact with the X-Men, but we never saw that, and it would have been via video phone anyway). 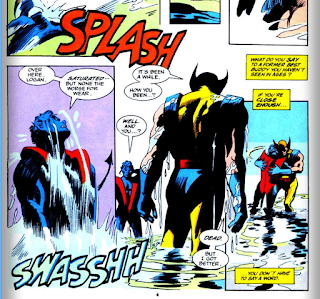 Nightcrawler later gives Wolverine some grief over not contacting him. 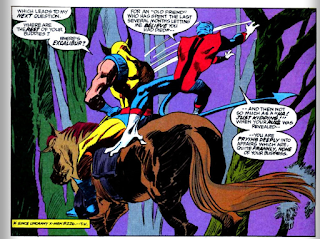 X-Men #7 featured a footnote to this story, with Maverick giving Wolverine information in exchange for his help acquiring the C-Synthesizer. Issue #102 reveals that Maverick told Wolverine about Nightcrawler's whereabouts with his old circus troupe (which seems like the kind of thing that maybe Wolverine shouldn't have needed Maverick to find out).

The "monsters" being hunted in this story are said to be the Neuri, the benevolent prehistoric beings introduced in Wolverine: Bloodlust and encountered by Meggan and Phoenix in Excalibur, though these Neuri look nothing like the ones shown previously. 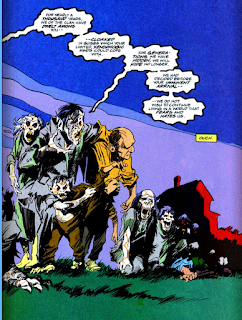 Members of Nigthcrawler's circus are revealed to have superpowers, the result of genetic manipulation. The person responsible for altering them is not explicitly stated, but the art makes it pretty clear it's Arnim Zola, the Nazi/Hydra scientist with a camera for a head and his face projected on his stomach.

A letter (written by internet columnist Augie De Blieck, who was apparently quite the Marvel Comics Presents letter hack back in the day, as he has a letter published in almost every one of these issues) asks when future Uncanny X-Men artist Joe Madueira will be getting a series of his own (following his work on a couple MCP stories), and also asks how his last name is pronounced.

Creator Central
Sam Keith continues to provide all the covers for these issues, while interior art comes from Gene Colan, who's filled in on a few Wolverine issues in the past but likely got the gig due to his long run on Tomb of Dracula.

The Chronology Corner
Nightcrawler appears in this story between Excalibur #50 and #51 (not his leg is without cast). Wolverine appears after X-Men #7, before Wolverine #51.

A Work in Progress
The story opens with Nigthcrawler working at the carnival he was a member of (alongside Amanda Sefton) before joining the X-Men.

Nightcrawler's foster brother Stefan, whose death at Nightcrawler's hands, per X-Men Annual #4, caused him to flee the circus and eventually end up with the X-Men, appears in flashback appear visibly different than in previous appearances. It's also retconned that Stefon killed himself (using Nightcrawler's tail), and was driven mad by his hunt for the monsters that turned out to be the Neuri. I don't think any of this ever gets referenced again. 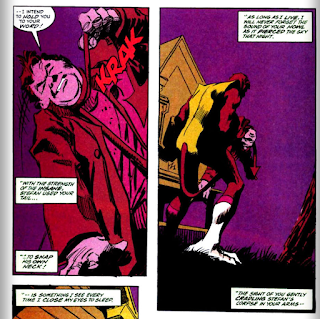 Austin's Analysis
The chief hook of this story is the first encounter between Wolverine and Nightcrawler since the whole "the X-Men faked their deaths, Excalibur was created, Excalibur learned the X-Men were alive but never actually had an on-page reunion" business, but other than a few lines of dialogue, that's not really what this story is about. Instead, it's more an attempt to recontextualize a component of Nightcrawler's origin, revealing that the step-brother he killed was driven insane by hunting monsters who turn out to be the benevolent Neuri (despite not looking at all like them), while also doing one of those "there but for the grace of God go us" mutant metaphor stories, with Wolverine & Nightcrawler seeing in the Neuri, persecuted just for looking like Nosferatu-ish vampire, the similar plight of mutantkind. And because this is Marvel Comics Presents and we've got eight chapters to fill, there's also some genetic-modified circus folk so a few chapters can be handed over to superpowered fights.

And on that level, this is kind of a disappointment, especially given the setup it received in X-Men #7. Take out the few lines of dialogue about how long it's been since they were hanging out together, and this story could take place at any time in Wolverine and Nightcrawler's history together. But despite that (and the visual inconsistency of the Neuri), I kind of liked this. The art from Gene Colan is a big part of that - it's a little murky in terms of panel-to-panel layout at times, but if you're going to have anyone draw a story about vaguely vampiric-looking monsters set in and around a misty European village populated by pitcfork-and-torch wielding villagers that looks like it was the setting of a Universal horror movie, then Gene Colan is the guy to do it. Maybe if I'd read this mid-summer instead of at the beginning of October I'd be less forgiving, but as an atmospheric quasi-horror story, moreso than a continuity-significant reunion of two-long separated character, this works surprisingly well.