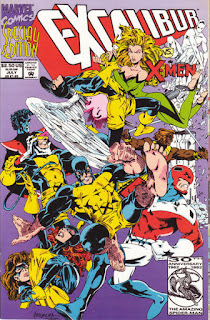 In a Nutshell
Excalibur is forced to fight the original X-Men.

Plot
Auditioning to become Dr. Doom's personal assassin, Sidestep targets Excalibur, using his power to pit each member of the team and against a member of the original X-Men, plucked from the past and inserted into a different historical time period, with the X-Men having home field advantage in each era. One by one the members of Excalibur defeat the X-Men, Frustrated, Sidestep brings both teams to the present, before Doom, and the X-Men attack. But Professor X, using Nightcrawler's astral self as a temporal anchor, reads Sidestep's mind and learns all his power comes from his vest, a lost weapon of the Kree. With that knowledge, Nightcrawler teleports the vest away from Sidestep, at which point both Excalibur and the X-Men are returned to their places of origin. Dr. Doom proceeds to dispatch the now-powerless Sidestep, then calls forth the next applicant.

Firsts and Other Notables
Drawing the chapter featuring Beast and Nightcrawler, this issue features the first work from future Uncanny X-Men artist Joe Maduerira in an X-book.

This is the first and (I assume) only appearance of Sidestep, a would-be assassin who harnessed a Kree weapon to give himself the power to shunt people through space and time. He is auditioning to become Dr. Doom's personal assassin, and citing Doom's encounter with Excalibur in issues #37-39, proposes to kill the team on his behalf.

Another extra length special issue, this is meant to represent Excalibur's 1992 annual. It's the final non-annual annual for the series, as the book will receive it's first official annual next year.

The Chronology Corner
This issue takes place between Excalibur #54 and #55.

A Work in Progress
Captain Britain wonders if Sidestep's power is more "Cross-Time madness", reminding us that Phoenix sacrificed herself to end it.

Kylun uses his sound mimicry power to scare Iceman into revealing himself. 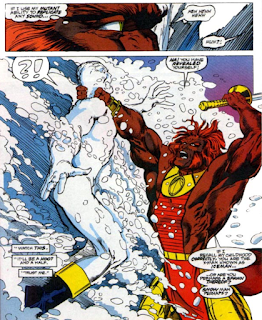 Nightcrawler apparently knows "Catholic school" Latin, though I believe he means Latin on the level of what one would learn in a Catholic school, as I doubt he ever attended one himself. 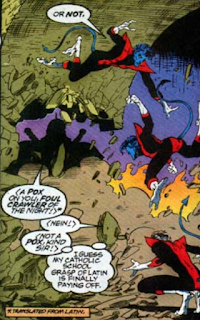 Austin's Analysis
In a vacuum, there's a lot to enjoy about this issue. The collection of artists (including a young Joe Madureira) isn't bad (like all such things, it's hit-or-misses, but there's more of the former than the latter), I'm a sucker for anything involving the original X-Men, and the historical angle (setting the pairings in different time periods, with the X-Men automatically acclimated to the time) is a lot of fun, punching up a pretty typical "hero vs. brainwashed hero" plot device. Using Dr. Doom in the framing sequence is a nice nod to the series' history, and if Sidestep is a laughable and ludicrously overpowered foe, he fits the more silly tone of the series, and his casual dismissal by Doom at the end is legitimately funny.

But here's the rub: this issue doesn't exist in a vacuum, and that's its biggest problem. This is the second consecutive Excalibur annual/special/thingee to go the route of "split the team up into separate parts, beginning and ending with a chapter where they're all together", and thus reading an awful lot like a reclaimed Marvel Comics Presents story (Air Apparent also wasn't the first Excalibur story to use that device, including at one actual MCP story). It's also at least the third time an Excalibur story feints at having the title characters interact with the X-Men, only to have the X-Men turn out to be something other than the real deals. Fool me once, etc. So whatever merits this issue might otherwise have (and there is some legitimately fun stuff here) are overshadowed by just how repetitive it feels, in terms of both structure and content.