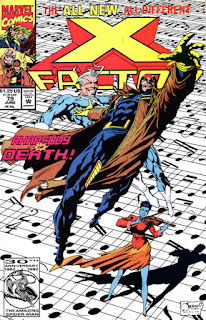 In a Nutshell
Quicksilver & Madrox confront a mutant suspected of murder.

Plot
After a mutant is suspected of murder, Quicksilver & Madrox are dispatched to Maine to help the local authorities capture her. Meanwhile, Lorna is attacked and knocked out by an unseen assailant while shopping. In Maine, Quicksilver & Madrox learn the suspect is a young woman named Rhapsody, whose mutant abilities only recently manifested, causing her to lose her job as a music teacher after the school board fired her. The biggest supporter on the board was Harry Sharp, who was recently found dead, with Rhapsody looking over his corpse. When the pair encounter her, she uses her power to hypnotize Madrox, but Quicksilver manages to capture her and snap Madrox out of her hallucination. But in the face of her insistence that she's innocent, Madrox  gets Quicksilver to agree to stay in town until everything gets sorted out, to ensure Rhapsody doesn't get railroaded by the local authorities. Back in DC, Val is briefing Alex on X-Factor's next assignment when Rahne interrupts, saying that Lorna's in the hospital, and they don't know if she'll survive.

Firsts and Other Notables
This issue marks the first appearance of Rhapsody, a young woman with blue skin and the mutant ability to use music to manipulate emotions/cause hallucinations/fly (it's not terribly clear how her power works, beyond "with music!"). She will appear in the plotline that runs from this issue through #81, but has yet to make an appearance outside of those issues. 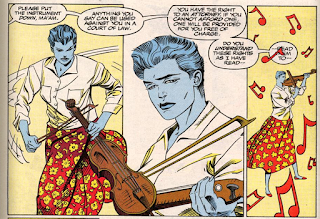 In a subplot scene setting up next issue, Polaris is sucker punched by someone with a metallic hand and ends up in the hospital. Next issue will reveal her attacker to be Cyber (from the first Sam Keith-drawn Wolverine story in Marvel Comics Presents, written by Peter David), and she'll end up getting her jaw wired shut as a result of his punch, which she'll sport up through "X-Cutioner's Song". 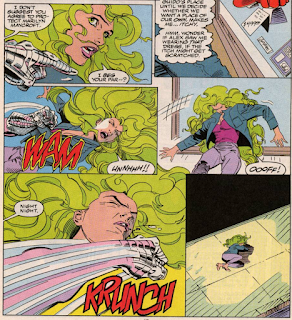 In another setup for next issue, Val tells Havok that X-Factor has been tasked with protecting a mutant named Shrew (the person Polaris was warned not to protect), a former member of a group called Helles Belles, against which she's testifying; Cyber will turn out to the Belles' leader.

A Work in Progress
There's a neat bit at the start of the issue where Quicksilver teaches himself to play piano at super-speed, such that for a few seconds, it sounds awful, while he's figuring it out, but then he settles in to play "Moonlight Sonata" by ear, from memory. 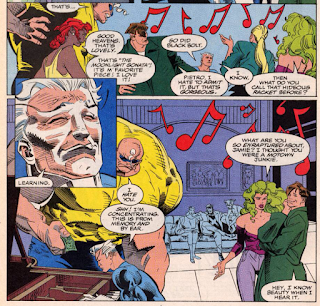 The idea that, in general, mutants manifest their powers at puberty is apparently known amongst the general public; when discussing Rhapsody, she's called a late bloomer because she's nineteen but her powers only recently manifest. 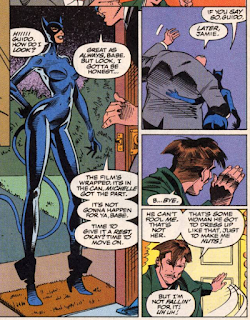 Human/Mutant Relations
While meeting with local authorities, Quicksilver defers to Madrox and manages to restrain his temper in the face of their attitudes towards mutants. Alone, he tells Madrox it's important that they present a united front. 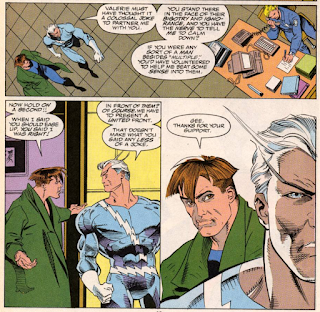 Young Love
Just before getting attacked, Lorna is shopping and musing on her relationship with Alex. Apparently, their exact status is still unclear, and they're stilling living with Guido because they aren't sure what their next step is. 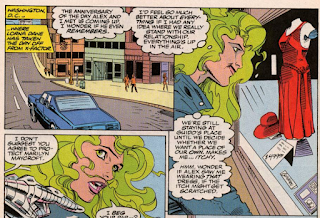 Austin's Analysis
In a lot of ways, this reads like what a "typical" issue of a series starring a government-sponsored team of mutant superheroes would read like. Local authorities have a mutant problem, so the federal solution to mutant problems gets called in to handle it. Meanwhile, the rest of the team gets assigned another federally-mandated mission. For a series about a government-sponsored team of mutants that hasn't yet really done this kind of "day in the life of government mutants" story (outside the "War and Pieces" crossover, but that was a really a Hulk story first and foremost), this should at least be interesting stuff. But it's not, really. The scratchy fill-in art from Jim Fern, doing his best Larry Stroman impersonation, doesn't help, nor does the central antagonist, a character who seems, in pure Peter David fashion, to be built around a pun and little else (she's a music teacher named Rhapsody, and she's blue...because, see, there's this famous piece of music called "Rhapsody in Blue"...). Not surprisingly, this story gets a lot more interesting when Larry Stroma returns and the Helles Belles show-up next issue.

Meanwhile, where this issue does work is the character stuff. No matter how drab Rhapsody is, pairing up Madrox and Quicksilver is fantastic. Both are capable of being funny, in their own ways, but they're also a pretty hilarious odd couple, the always-serious Quicksilver and the rarely-serious Madrox. Quicksilver has one of the strongest personalities in the Marvel Universe - arrogant, snotty, a little droll, but still heroic, while Madrox is still, aside from being a jokester, something of a cipher as a character. David gets a lot of mileage out of the pairing here, and it's a great example of how, once again, characterization really is the key to this series' success.