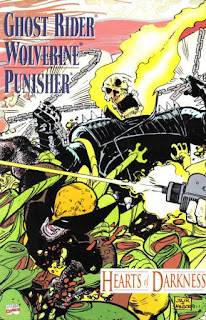 In a Nutshell
Ghost Rider, Wolverine & Punisher are tempted by Blackheart to destroy Mephisto.

Plot
After a Satantic cult raises Blackheart, son of Mephisto, the demon slays the cult, then declares he will kill his father. Later, Dan Ketch arrives in the small town of Christ's Crown, and ends up staying at a boarding house with fellow new arrivals Mr. Logan and Mr. Frank. All three heroes - Ghost Rider, Wolverine and Punisher - have been lured to the town by Blackheart, who promises information important to each of them in exchange for their help killing Mephisto. All three refuse, prompting Blackheart to take control of the town and capture Lucy, the daughter of the boarding house keeper, to force the heroes into helping him. They fight their way to the demonic realm where Blackheart is holding Lucy, and Blackheart once again offers to trade information for their help killing his father, but they refuse, and manage to severely injury the demon. Just then, Mephisto appears and swallows his son, declaring its time to teach him a lesson, after which he returns the heroes and Lucy to Earth, where Ghost Rider declares that while they may come close to, or occasionally cross the edge of being heroes, so long as the innocent ar e protected, their cause is just.

Firsts and Other Notables
The villain of this issue is Blackheart, the son of Marvel's original Satan-stand-in Mephisto, who first appeared in Daredevil #270, during John Romita Jr.'s run on that book. When Mephisto appears at the end of the issue, it's in his weird dreadlocked pseudo-goatface, Buddha-belly form from the JRjr Daredevil run, rather than his more classic, more human form. 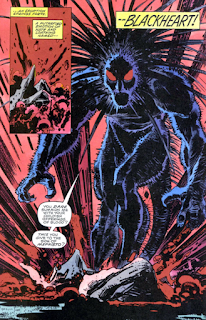 John Romita Jr. draws this issue a couple months before his one-off fill-in for Uncanny X-Men, and about year out from his return as that series' regular penciler.

This is a prestige format oneshot, printed on glossy paper, squarebound, with a cardstock cover.

The Chronology Corner
Wolverine wears his orange-and-tan costume in this issue, setting it before the events of Wolverine #49/X-Men #4, specifically between issues #3 and #4 of X-Men, and prior to Wolverine #48.

A Work in Progress
Wolverine is tempted by Blackheart with information about his past, specifically how he got his claws, something he says he's not interested in. He may be bluffing though, as recent events in both Wolverine and X-Men (set after this story, of course) are all about him wanting to explore his past.

No mention is made of Wolverine and Ghost Rider's shared time together in the New Fantastic Four.

Blackheart tempts Wolverine with information regarding the origin of his adamantium skeleton and claws (he claims to not care), Punisher with the whereabouts of the criminals who killed his family (he already knows) and Ghost Rider with information about the demon Zarathos (who possessed the original Ghost Rider, but not this one).

The Grim 'n' Gritty 90s
That a prestige format oneshot starring Ghost Rider, Punisher and Wolverine was a thing is one of the ten most 90s thing ever; slap a gimmick cover on this and it's pretty much the 90s in a nutshell.

The end of the issue affirms the notion that while these three heroes may skirt, or even cross, the line of traditional superhero morality, it's all okay so long as innocents are protected. 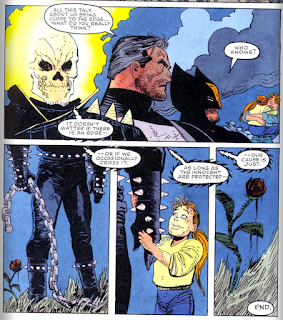 Austin's Analysis
The big draw of this issue (for me at least; for Marvel, the big draw was obviously the commercial appeal of putting Wolverine, Punisher and Ghost Rider together in an overpriced oneshot in 1992) is hands down the John Romita Jr. art, which has fully morphed into his new (relative to his original X-Men run) blockier style by this time. I know this style isn't for everyone and has plenty of detractors, but I love it; in fact, my appreciation of JRjr's art goes hand-in-hand with how close it approximates this style; the closer to it is, the more I like it. This is where my limited artistic vocabulary fails me, because I lack the ability to explain why I like this style so much. It's definitely not realistic, and definitely a move away from that style relative to his earlier work. Maybe it's just because I encountered it early in my comic reading days, so it kind of imprinted on me, but it seems like the quintessential superhero art, the perfect mix of realism, storytelling, and bombastic, larger-than-life figures. The plot and dialogue in this issue are pretty pedestrian (aside from a minor but mildly interesting bit of running commentary on the nature of heroes at this point in the 90s), but the art injects the whole thing with a lot of energy, and makes for a nice appetizer to the upcoming JRjr run on Uncanny.