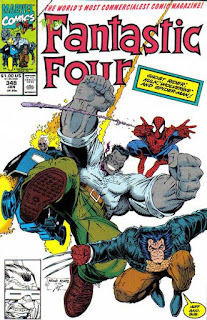 In a Nutshell
A renegade Skrull recruits a New Fantastic Four to unknowingly help her acquire a weapon to use against the Skrull Empire.

Plot
Issue #347: Fleeing pursuit, a renegade Skrull named De'Lila crashes on Earth shortly after the Fantastic Four's return from an inter-dimensional journey through time. De'Lila, using her shapeshifting abilities, proceeds to infiltrate Four Freedoms Plaza and take out the Fantastic Four one by one. Meanwhile, the Skrulls pursuing her arrive on Earth and are drawn to Monster Island by readings which suggest the monsters which dwell there share some Skrull DNA. They proceed to send the monsters out into the world to flush out De'Lila. De'Lila, in the guise of Invisible Woman, puts out a call for help, to which Hulk, Wolverine, Spider-Man and Ghost Rider respond. Though reluctant to help her at first, they acquiese upon seeing the apparent dead bodies of the Fantastic Four, and agree to become a new Fantastic Four to avenge them.

Issue #348: The New Fantastic Four depart Four Freedoms Plaza, using a device provided by De'Lila which they believe will lead them to the source of the attacking monsters and the murderers of the real Fantastic Four. En route, they stop a monster attacking a plane over Washington, D.C., then proceed to follow it to Monster Island. On Monster Island, Mole Man has captured the Skrulls pursuing De'Lila just as the new Fantastic Four arrive and proceed to interrogate them, learning of De'Lila, including her telepathic powers, which made duping them easier. 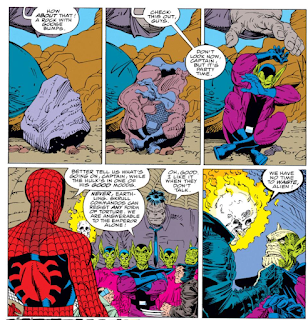 Meanwhile, De'Lila, still posing as Invisible Woman, wakes up Mr. Fantastic, and with the help of her telepathic abilities, enlists his help in finding the weapon she seeks, which turns out to be on Monster Island. When they arrive on the island, they're attacked by the new Fantastic Four, but Mr. Fantastic insists they'll have to go through him to get to "Invisible Woman". Hulk says since they've already seen his dead body, that won't be a problem.

Issue #349: De'Lila reveals her true form and uses her telepathy to ensnare the new Fantastic Four. Meanwhile, Franklin Richards revives the rest of the Fantastic Four, and they head to Monster Island. On the island, the new Fantastic Four discover what De'Lila's is after: an egg containing a robotic bodyguard intended for the Skrull empress. Combined their powers, they release the egg, but as the rest of the Fantastic Four arrive, two of Mole Man's monsters take the egg, so that when it hatches, the robot bonds to them instead of De'Lila. Realizing she's lost, De'Lila tries to flee with Mr. Fantastic in tow, but after she threatens Invisible Woman, he breaks free of her control. Ghost Rider proceeds to use his penance stare to force her to relive all the terrible things she's done, while Spider-Man convinces Mole Man to let them all leave in peace.

Firsts and Other Notables
A story intended to lampoon the increasing trend of handing over issues of low (or lower)-selling series to hot guest star characters, effectively pushing the stars of the series into the background in the process of a short term cash grab, issue #347 marks the first appearance of the New Fantastic Four, comprised of Wolverine, (Grey) Hulk, Spider-Man and Ghost Rider, four of Marvel's most popular/edgiest characters at the time (Spider-Man at this time is coming off the debut of Spider-Man #1, then the best-selling comic of all time). 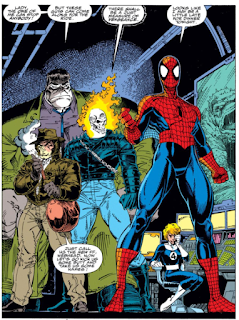 At the time, this team was considered a big enough deal to warrant its own trading card in the second Marvel Universe set, but this group hasn't really appeared as a team outside of this storyline, barring issue #3 of the 2010 Spider-Man/Fantastic Four miniseries (a miniseries in which each issue depicts a different significant meeting between the FF and Spider-Man from throughout their history together), which picks up where issue #349 leaves off, expanding on the immediate aftermath of De'lila's defeat.

As if to put a bow on all the kewl 90s guest stars, the Punisher pops up for a brief cameo at the end of the story. 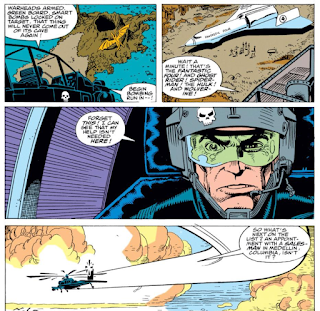 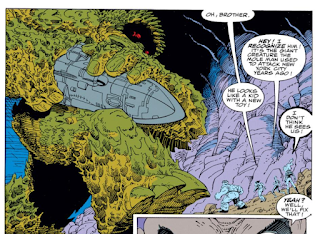 The Skrulls, which lost their shapeshifting ability in the mid-80s, have since regained it in the pages of Silver Surfer's solo series. Not only is that ability integral to this storyline, it features heavily in the upcoming Shi'ar story in Uncanny X-Men.

Issue #348 received a second printing, with the white background on the cover replaced with a gold one.

Creator Central
This story occurs towards the tail end of former X-Factor penciller and Thor writer/artist Walt Simonson's run on Fantastic Four (he leaves the series with issue #354), a run which remains acclaimed today and stands as one of the better post-Byrne runs on the series.

Though, barring a few issues here and there, Simonson drew most of his FF stories as well as writing them, this story is drawn by Art Adams (with some assistance from Gracie Tanaka, with whom I'm not familiar), whose work we last saw in X-Men Annual #14. Given how influential Adams work is on the future Image Founders, having him draw this story lampooning trends of the 90s adds another level to the satire, while still giving it really good art.

The Chronology Corner
Wolverine appears in this story following the Ghost Rider story in Marvel Comics Presents #64-71, and before Wolverine #35-37 (after which he appears in X-Men #273-277)

Teebore's Take
An intentional satirical poke at the tendency of series being forced to hand over issues to popular guest stars, regardless of how well they fit the ongoing narratives or themes of said series (a practice that was already well on the rise in the early 90s), this story succeeds because in addition to being a telling satire, it's also a really entertaining story. Simonson is clearly having fun, even while he's making his point, and as much as this is about how the more commercially-successful characters have a tendency to take over titles, the original FF still gets plenty of page time, along with a cadre of Skrulls, Mole Man and a bunch of giant monsters, for good measure. Adams, even with the artistic assist, is fantastic as always, imbuing it with a level of comic energy and making the whole thing as great to look at as it is fun to read.

The X-Men connection is fairly limited. Of all the New Fantastic Four, Wolverine arguably gets lost in the shuffle the most. At times, he almost operates in the calming leadership role, but Spider-Man takes that on at times as well. Ghost Rider, the newer commodity (to both readers and the characters), fills the mysterious loner archetype. And Wolverine is certainly out-hotheaded by the Hulk throughout the story. As a result, he's just sort of there, ironically crowded out when he, of all the "new" characters, is one whose presence as a guest star would be the most exploited in the years ahead. But despite the tenuous X-Men connection, I still wanted to review this story, because of what it says about comics in the early 90s, because shapeshifting Skrulls will soon feature prominently in Uncanny X-Men, but most of all, just because by the end of it, you've got the New Fantastic Four, the old Fantastic Four (including She-Thing and Ben Grimm in a robotic Thing suit), Skrulls, the Mole Man, and a whole bunch of vintage, Atlas-era style monsters running around, all drawn by Art Adams, and that's just simply too much fun to pass up.

Next Issue
Tomorrow, "Girls School from Heck" wraps up in Excalibur #34. Friday, Wolverine pals around with Ernest Hemingway in Wolverine #36. Next week, jungle lovin' in Uncanny X-Men #274.