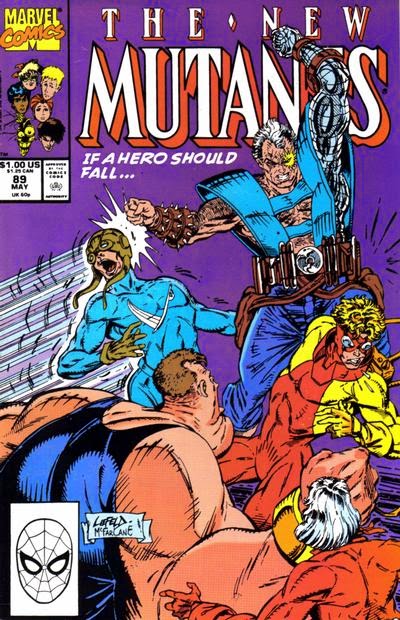 In a Nutshell
Cable joins the New Mutants.

Plot
Freedom Force chases after Cable, shooting down his helicopter as he races for the city, but Cable is able to return fire before bailing out, and both choppers crash into the river. Cable reaches shore first, and heads deeper into the city. Meanwhile, Sam, Roberto and Boom-Boom land outside Tiffany's, reluctantly shopping for a going away present for Rahne. They end up buying her a crystal wolf figurine as Cable is accosted by Freedom Force in a nearby alley. Back at Ship, Rahne packs her things, much to Rictor's dismay, and when Moira arrives to pick her up, she is shocked by her foster mother's demeanor. Elsewhere, Cable's fight with Freedom Force attracts the attention of the rest of the New Mutants, who, eager to take on Freedom Force, come to his aid. Back at Ship, Rictor and Warlock destroy Moira's helicopter to prevent her from leaving before the rest of the team returns. 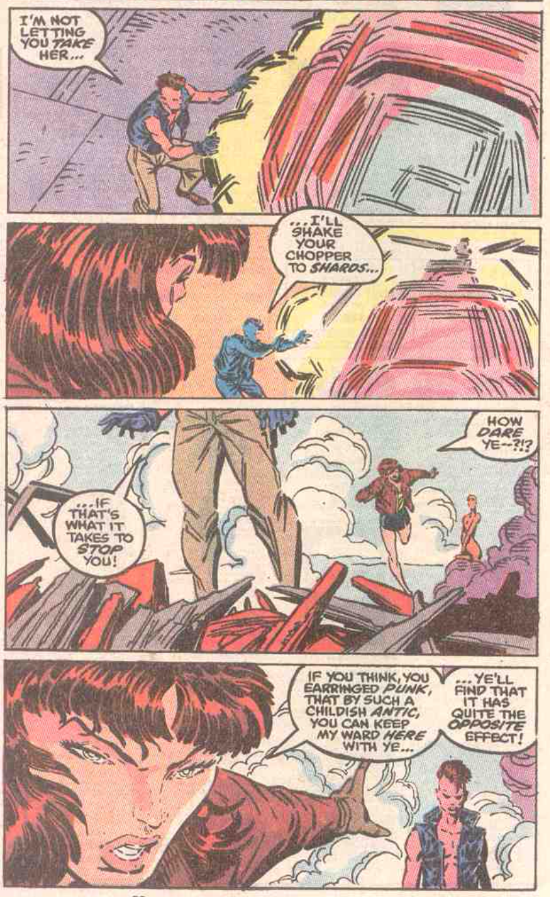 Meanwhile, with Cable's guidance, the New Mutants are able to overpower Freedom Force, and Cable tells them about Rusty and Skids' abduction by the MLF. The New Mutants take Cable back to Ship where he convinces Moira, whom he's met before, to allow Rahne to stay with the New Mutants, under his guidance, as he needs their help to stop the MLF. Moira reluctantly agrees, then departs, Rictor and Warlock having only faked the destruction of her helicopter. Rahne thanks Cable for helping her stay, though he admits his plan could get them all killed, while Sam is appreciative of Cable's attitude. However, Rictor is none too pleased with Cable's arrival, for though Cable doesn't recognize him, Rictor knows him, all too well.

Firsts and Other Notables
Cable effectively joins the New Mutants this issue, becoming their latest (and last) mentor figure, after Sam, Roberto and Boom-Boom help him fight off Freedom Force and after Cable is able to negotiate Rahne's continued stay with the team.

This issue also establishes that Moira knows Cable, one of the few "Cable has a mysterious past with everyone!" connections that actually does get some future exploration, as Cable #-1 establishes that Moira took Cable in after he first arrived in this timeline. She also says that he's more the metal man than ever, which actually is consistent with the later revelations regarding the source of Cable's metal limbs, as it stands to reason the Techno-Organic virus has just spread since Moira last saw Cable (he was already metallic when they first met). 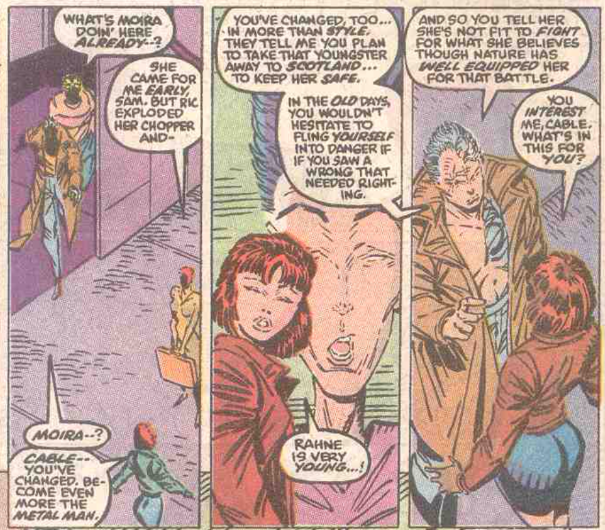 We learn that Rictor has a past with Cable as well, and doesn't like him, something that will be teased throughout the rest of the series and into X-Force, when it will eventually be revealed that Stryfe killed Rictor's father, leading Rictor to believe it was Cable who did so.

The Shadow King-controlled Legion appears briefly via monitor in this issue, and it's never made clear why gives up on having Rahne come to Muir Island and allows Cable to take control of the New Mutants, though my headcannon explanation is that Moira is far enough outside his influence that a bit of her own personality is subconsciously asserting itself, allowing her to operate outside his plans.

Cable recognizes the New Mutants from TV when they find him in the alley, and decides they can help him in his mission. Which doesn't exactly gel with the later idea that Cable specifically came to this timeline to help shepherd the development of Cannonball (an idea which, granted, was later more or less overwritten/ignored by other motivations).
As of this issue, Cable states that his mission is the highly-specific desire to stop the MLF from building a hydrogen bomb (last issue, Freedom Force told him the MLF had stolen the ingredients for one), which he believes the New Mutants can help him accomplish.

The cover to this issue is significantly less dynamic than the previous one, and is the weakest and most-rushed looking Liefeld cover for the series yet, looking like it could just be a panel inside the book itself, anatomy issues aside.

A Work in Progress
Rahne has a collection of souvenirs from her adventures with the New Mutants, including a piece of marble from Nova Roma and a feather from their first trip to Asgard.

The New Mutants have to do a bit of hair-splitting justification to intervene on Cable's behalf against Freedom Force, given X-Factor's request last issue. 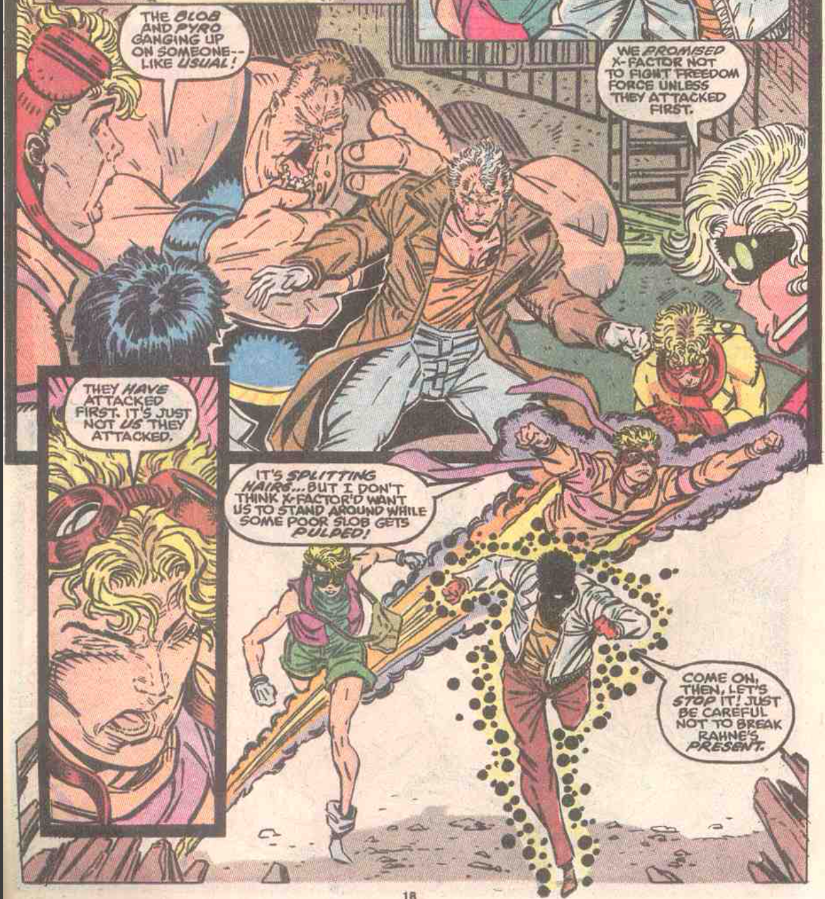 Sam and Roberto appreciate that Cable seems to understand their concerns that having powers gives them a responsibility to help others, something they feel they haven't been doing much lately. 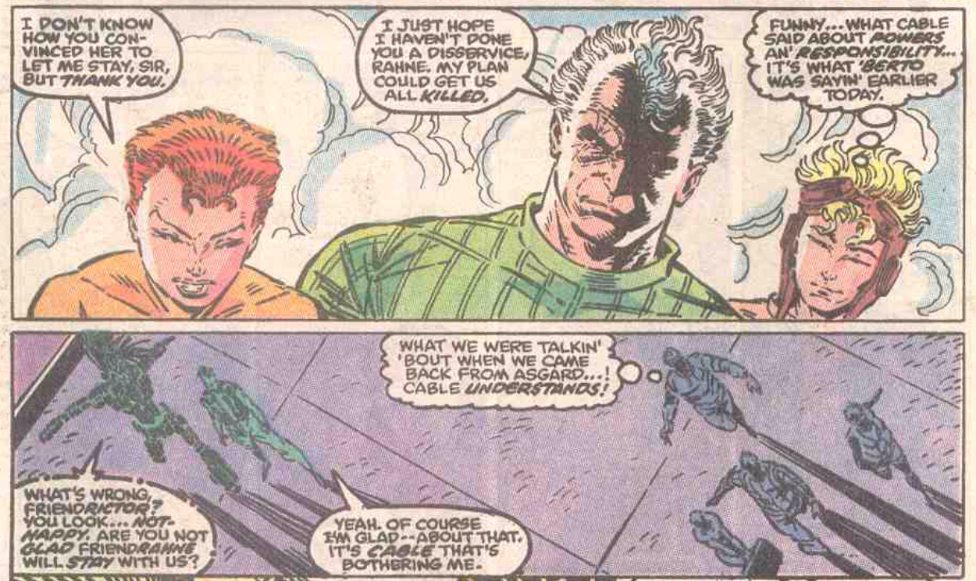 The Cable Guy
We get the first of many splash pages depicting Cable wielding an impossibly-large gun. 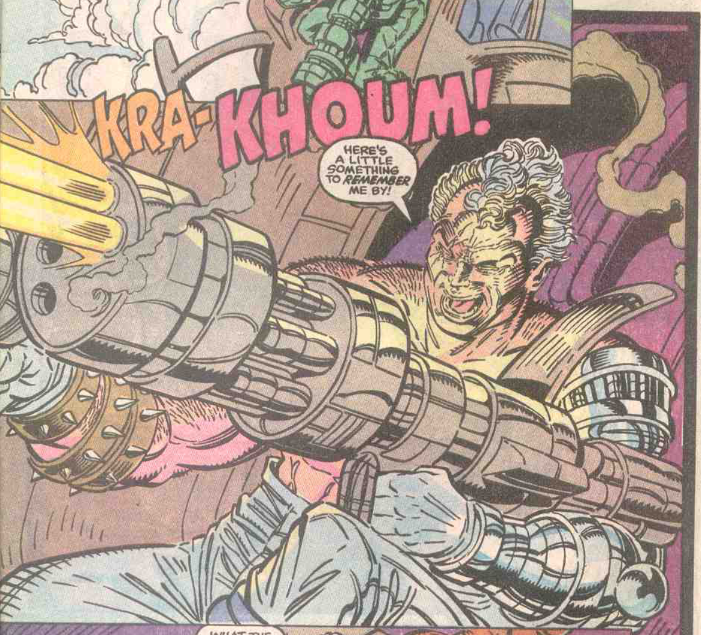 It's established that Cable has a bionic eye in this issue, which gives him enhanced vision. Notably, it's the eye that isn't surrounded by scars. 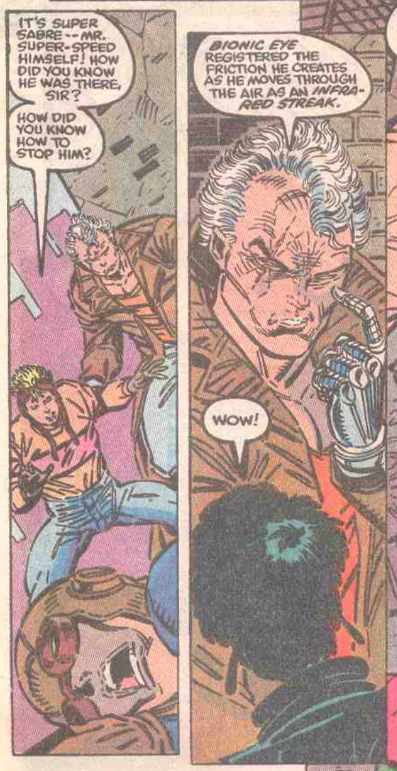 501 Genes
This issue features the debut of Rahne's new werewolf form, in which she has triangle hair for some reason (not unlike MLF member Wildside), a look that other artists beyond Liefeld will eventually adopt for the character, making it, for the most part, her default look for much of the 90s. Liefeld will re-use the triangle hair design later for Feral, another animalistic mutant, making the Feral and Wolfsbane virtually visually indistinguishable from one another. 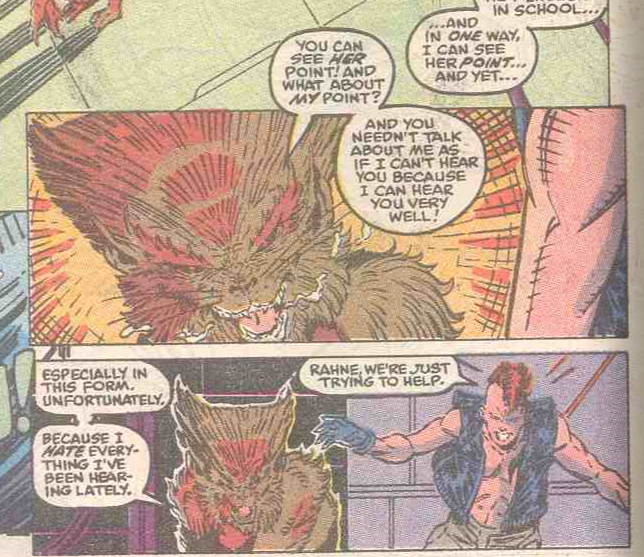 Roberto punches a wall inside Ship in anger, breaking off a piece of it, despite not being powered up.

As Cable climbs out of the river, the distance between himself and the fence in the background seems to shift wildly between panels. 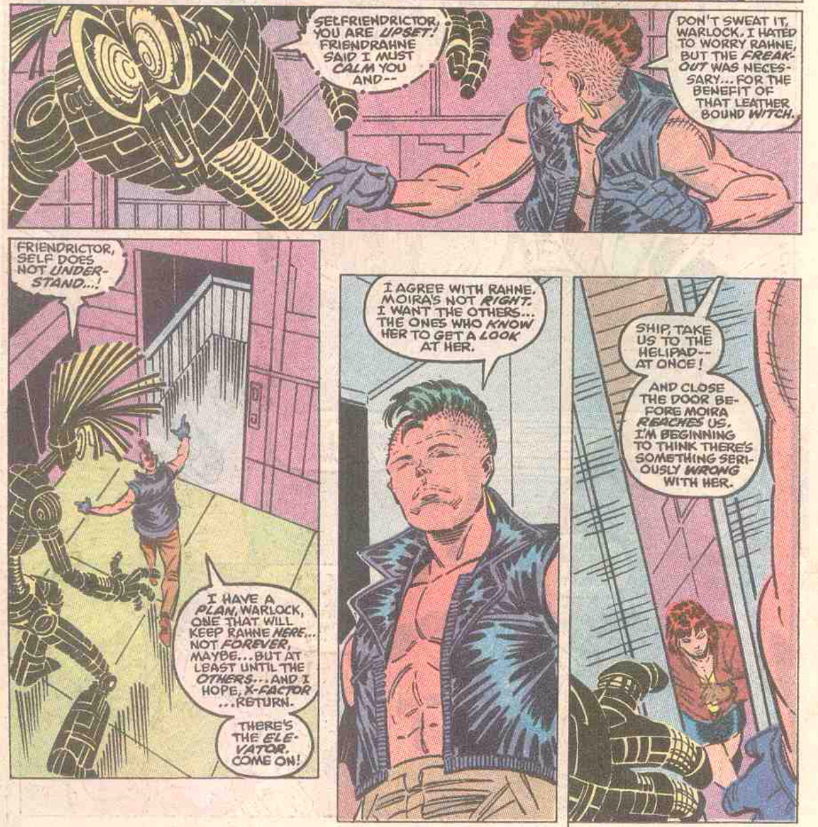 Liefeld seems uncertain of how to draw the roof of Ship, where Moira lands, the end result being it looks like the rooftop of a regular city building, with a door that opens out onto it.

The dialogue claims that Roberto "taps" Crimson Commando during their fight, but the artwork doesn't really support that. 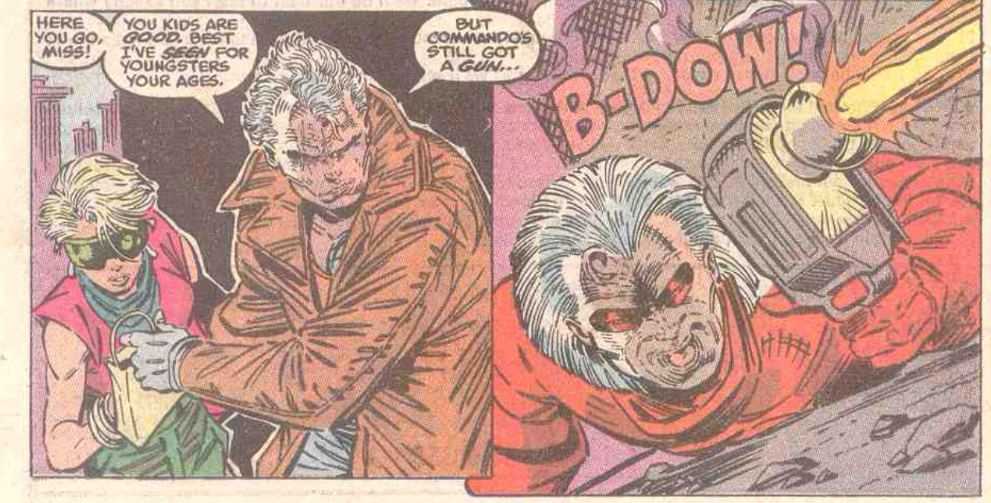 Lots and lots of squinty eyes in this one.

Young Love
When asked about it by Roberto, Boom-Boom downplays any feeling she may have for Rictor, claiming he's like a brother to her.

Rictor and Rahne grow closer, meanwhile, with it more or less all but stated that the reason they're both so upset about Rahne leaving is because of their feelings for one another. 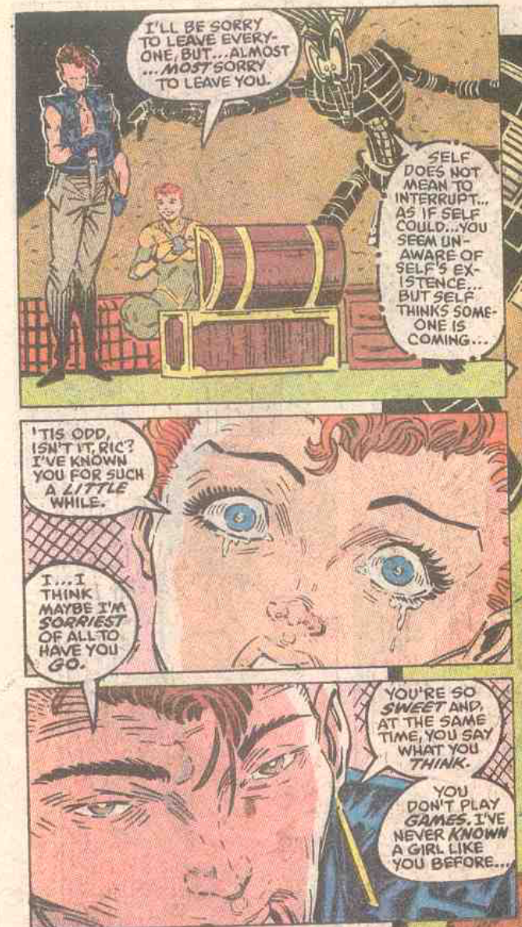 Teebore's Take
Though he's been a presence in the book since his debut in issue #87, this marks the technical beginning of the Cable era of the series, as he meets the New Mutants and essentially adopts them as his charges/pupils. In-universe, it's a bit abrupt, as the two parties have just met each other, but anyone paying attention the last three issues saw where this was all headed, and Simonson has done her best to lay some groundwork for the development in the time she had: seeing Cable getting attacked by Freedom Force and his ability to talk Moira out of taking away Rahne endears him to the New Mutants, while the fact that he's willing to fight to save Rusty & Skids specifically and mutants in general gives him a leg up on the New Mutants' current teachers, motivating them to throw in with him (thus making clear the reason, to readers, at least, for X-Factor's otherwise uncharacteristic shoulder-shrugging response to the kidnapping of their former students) while also speaking to the overall sense of malaise the New Mutants have been feeling about their purpose more or less since "Inferno" and Magneto's departure (though much of that sensation has been masked by stuff like spending forever in Asgard). Meanwhile, establishing a history between Cable and Moira hand waves away any objections the other adults might have with this mysterious cyborg solider mentoring these kids: it's all good, Moira vouches for him! So while Cable, a character who debuted just two months' prior to this issue, becoming the book's latest authority figure isn't exactly the most intricately set up plot development, there is some setup here, and to Simonson's credit, she sells the idea about as well as she could.