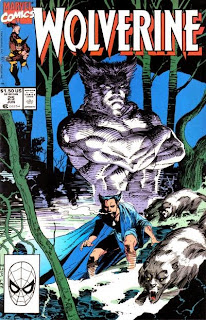 In a Nutshell
A rare (possible) glimpse at Wolverine's early days.

Plot
A small time gangster named Morrow calls in a favor from Wolverine. He is preparing to launch a turf war with his rival Piggot, and fearing Piggot will attack through Morrow's son, Gabriel, tasks Wolverine with protecting the boy for the evening. When Gabriel asks for a bedtime story, Wolverine tells him of a small boy cast out for being weak, who is adopted by a pack of wolverines in the Canadian wilderness. Growing stronger and more feral, the boy is captured by fur traders, but the wolverines attempt to free him. When some are shot, the boy flies into a rage and kills the traders. As the story ends, some of Piggot's men break into the house, targeting Gabriel, but Wolverine fights them off. Just then, Morrow and his men return home, followed by Piggot's forces. Piggot arrives as his men capture Morrow, and though Wolverine tries to intercede on his behalf, he's overwhelmed. However, just as Piggot is about to kill Morrow, Gabriel, inspired by Wolverine's story, runs a serving cart into Piggot, saving his father. The police arrive and a stalemate is declared, the Prince liking the current situation the way it is. But Wolverine's debt to Morrow is repaid, and Gabriel's actions give him hope for the future.

Firsts and Other Notables
This issue is notable for the story at the center of it, which Wolverine tells Gabriel, as it can be read as a possible origin for Wolverine, representing one of the earliest (chronological) appearances of the character up to this point. For the most part, it fits with the later revelations of Origin, in that, while not cast out for being small and weak, Wolverine was a frail boy who lived in the Canadian wilderness amongst wolves (rather than wolverines) for a time after leaving his home. 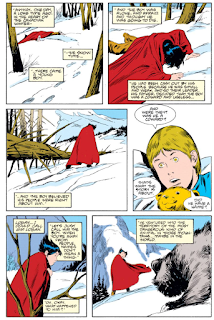 Jo Duffy comes aboard as the new series writer this issue. I'm not sure if she's considered the regular writer during her run or just a long term fill-in, but she bridges the gap between the Goodwin/Byrne run and the upcoming Hama/Silvestri run with two standalone stories and a four-parter, "The Lazarus Project".

John Buscema, who launched the series with Chris Claremont, returns for this issue, though it's just a one-and-done fill-in return for him (he'll do one more such issue before leaving the series for good).

A Work in Progress
Though Wolverine is drawn wearing his eye patch, he specifically says he has eschewed that identity in this issue, and comes to Morrow as Wolverine. 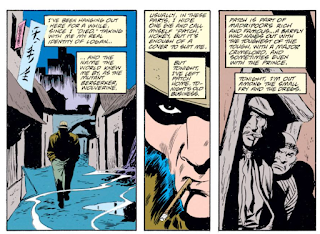 
Teebore's Take
Jo Duffy comes aboard and John Buscema returns, and the result is a done-in-one that pleasantly harkens back to the more noir-ish, movie serial-inspired vibe of the book's early days. The centerpiece of this issue is Wolverine's tale to Gabriel, the Jungle Book-esque story of a boy raised by wolverines. In the days before Origin, this stood as one of the earliest (possible) looks at Wolverine's past, and I seem to remember this issue being something of a hot back issue once upon a time as a result (the Jim Lee cover, at a time when all things Jim Lee were hot, probably didn't hurt).

The tale still works, even after much of the mystique has been stripped from Wolverine's character, because, ultimately, it's a story he's telling, so any contradictions with later revelations can be chalked up to Wolverine being an unreliable narrator (either intentionally or due to memory issues). At a time when comics were really starting to embrace the whole "every 25 issues is a big deal" mentality, the (at the time) rare look at Wolverine's past (potentially) and the return of the series' original artist combine to make the series' 25th issue feel a little bit more momentous than the average done-in-one/fill-in issue, and it's one of the best issues of the series yet.

Next Issue
Liefeld does Wolverine in Marvel Comics Presents #51-53.