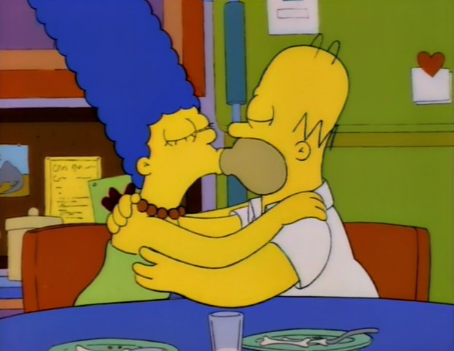 Or the One Where
The Simpsons family shares tales of past loves.

The Setup
Marge worries that she and Homer have neglected the kids' education in matters of the heart.

Notable Notes
As the title suggests, this is another clip show, the second of four (to date) pure clip shows the show has done. It features clips from episodes from all five previous seasons.

In true commitment to the form, pretty much all the footage in this episode is recycled: even the framing sequences are cut from existing footage, with new audio recorded for those sequences.

In a rare bit of continuity for a clip show, Homer learns about Marge's almost-affair with sleezy bowling instructor Jacques in this episode, and we also learn what happened to Michelle Pfeifer's Mindy after the events of "Last Temptation of Homer".

Both the writer and director of this episode were originally credited under pseudonyms ("Penny Wise" and "Pound Foolish") as they didn't want credit for working on a clip show.

The use of Simpsons clip shows came about at the insistence of Fox, who wanted clip show episodes because they cost half as much to make but Fox could sell the syndication rights to the episode for full price. Originally, the producers planned to create four clip show episodes a season to meet Fox's demands for additional episodes, but they decided that would ultimately alienate fans too much.

One of the reasons this clip show aired when it did is because in 1994, the NFL awarded Fox broadcast rights to some Sunday afternoon football games for the first time. As a result, Fox wanted The Simpsons to debut with the football season, a few weeks earlier than usual. So the two holdover episodes from season five aired, along with a rerun of the football-centric "Lisa the Greek" and this less-labor-intensive clip show to fill the extra weeks.

Quotable Quotes
Marge: Wake up!
Homer: Marge, it's 3:00 AM and I worked all day!
Marge: It's 9:30 PM and you spent your whole Saturday drinking beer in Maggie's kiddie pool!

Marge: How many times can you laugh at that cat getting hit by the moon?
Bart: It's a new episode.
Lisa: Not exactly...they pieced it together from old shows, but it seems new to the trusting eyes of impressionable youth.
Bart: Really?
Lisa: Ren and Stimpy do it all the time.
Marge: Yes they do, and when was the last time you heard anyone talk about Ren and Stimpy?

Marge: I mean "romance", not "love".
Lisa: Mom, romance is dead. It was acquired in a hostile takeover by Hallmark and Disney, homogenized, and sold off piece by piece.

Marge: So if you kind of mentally snip out the part where I already had a husband, that's my idea of romance.
Homer: Marge, I want you to stop seeing this Jacques. You can let him down gently, but over the next couple of months I want you to break it off.
Marge: Er, OK, Homer...
Homer: Whew! That was a close one, kids.

Bart: What happened to Mindy?
Marge: Yes, what did happen to her?
Homer: Ehh, she hit the bottle pretty hard and lost her job.
Marge: Hmph. Good. 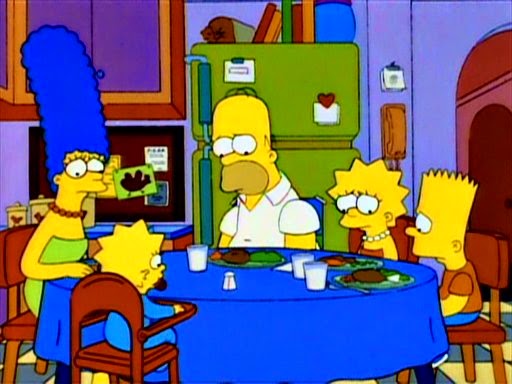 Teebore's Take
Well, it's a clip show. Credit where it's due: the producers make an effort to establish a theme for this one, giving the clips a unifying element so they're not just a random assortment of past gags, and in doing so, they allow for a bit of characterization (and even a few moments of continuity) in and amongst the rewarmed material (and said material is culled from some of the show's best years). That said, this is just a clip a show, a hopelessly outdated relic of TV's past (it's hard to imagine any show getting away with something like this nowadays) that not even The Simpsons, at the height of its commercial and critical appeal, could avoid. It's somewhat amusing, when blowing through a bunch of episodes on DVD (or an FXX marathon), to come across one of these, a reminder of a quaint tool in the TV toolbox long since abandoned. But after a moment or two of wry amusement, the "next" button is pushed and it's on to another, better, episode.

It's right there in the name: another clip show. The framing sequence isn't bad and the clips are top notch, but still. Just a clip show.
Newer Post Older Post Home
Posted by Austin Gorton at 12:00 PM