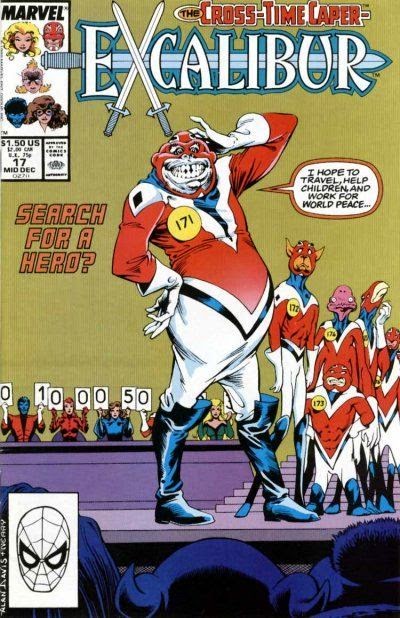 In a Nutshell
Excalibur oversees the selection of a new world champion.

Plot
The narrator continues her story, telling her bar-bound audience of how Nightcrawler's plan to feed Phoenix to the alien being feeding on the life force of the planet succeeded, destroying the creature and releasing its victims. Though still powerless, a massive celebration ensued, during which Rachel slipped away, ruminating on life without the Phoenix force. On her own, she takes a job working for the world's version of Jean Grey until she's killed by a group of slavers, whom Rachel slays in turn. This leads the remaining slavers to send an assassin after Excalibur, who are in the midst of overseeing a tournament to determine a champion for the world. Quickly, the contest comes down to three candidates: Kymri, Lockheed and a masked woman whom Kitty easily recognizes as Rachel. 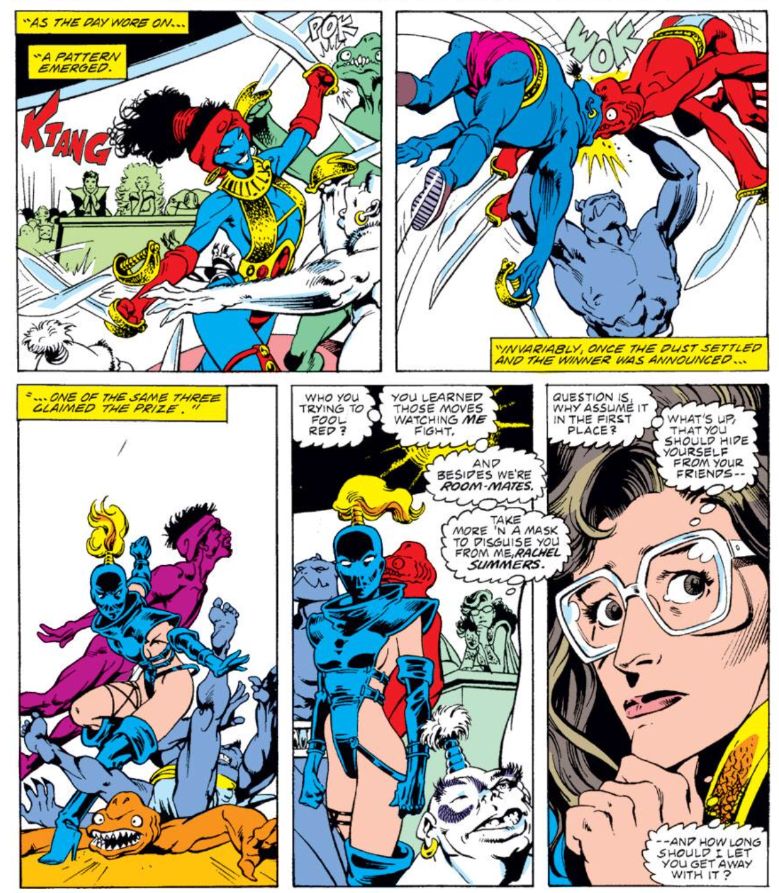 As the tournament nears its end, the assassin strikes, killing all of Excalibur save for Meggan, as well as Kymri and Lockheed, before Rachel kills the assassin in turn. Meggan tells Rachel that she is channeling the spirit of the world, but that she needs the celestial spark of Phoenix to restore it and the lives of their friends, and that Rachel is denying her responsibility by denying the power. The narrator then teasingly pauses, before revealing herself as Kitty and explaining that Rachel reclaimed her power and thus restored everyone, including the world's spirit, after which Lockheed and Kymri jointly took on the mantle of champion as Excalibur moved on to a new world. Saying farewell, Kitty boards Excalibur's train as Rachel and Widget begin the jump to yet another world, with Kitty spotting the arrival of Professor X and the Starjammers just as Excalibur disappears.

Firsts and Other Notables
The narrator of last issue and this one is revealed to be Kitty, telling the tale to a group of aliens on the world Excalibur reached after the world of the main story. At one point, she awards one of the listeners a "No Prize", Marvel's famous prize to readers for pointing out an error in a story and then offering up an explanation for it that was, of course, not a prize (though the context in which Kitty awards it isn't quite right).

Professor X and the Starjammers appear on the last page of the issue, arriving just as Widget and Phoenix transport Excalibur away to another world. However, it's not clear if they are the real Starjammers (meaning Excalibur was, at the time, back in the correct universe, albeit on an alien world), or just the Starjammers of whatever alternate reality they were in, which greatly resembled the Starjammers of Excalibur's home reality. 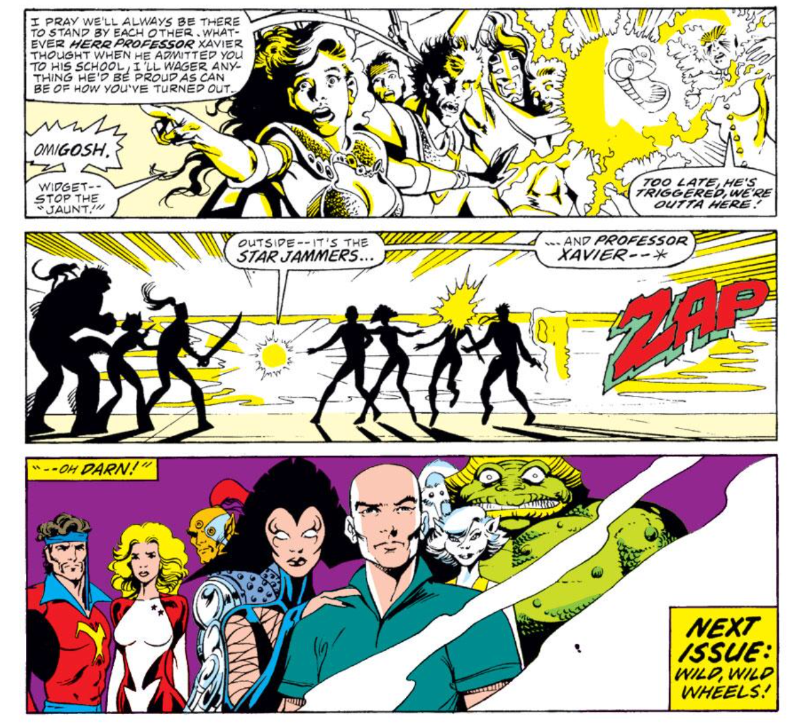 This issue marks the first appearance of a race of portly blue slavers, from which hails Tullamore Voge, a minor villain Claremont will introduce in his first return to the X-books in the early 00s, and use again in the more recent Nightcrawler series. 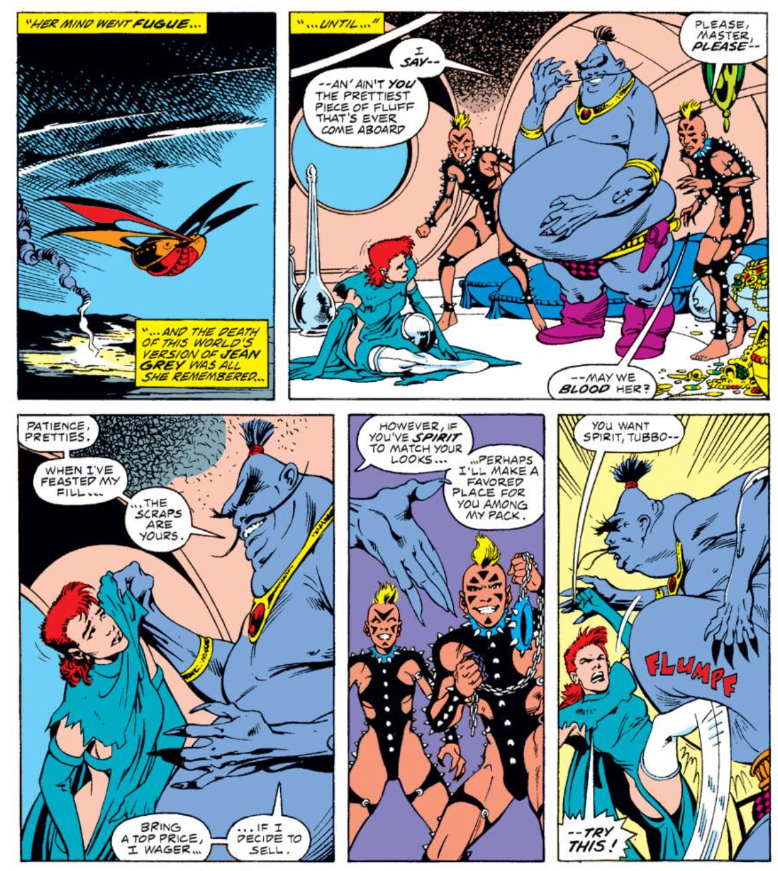 A Work in Progress
This issue reveals the large purple dragonish warrior who befriended Kitty and Rachel last issue is this world's version of Lockheed. 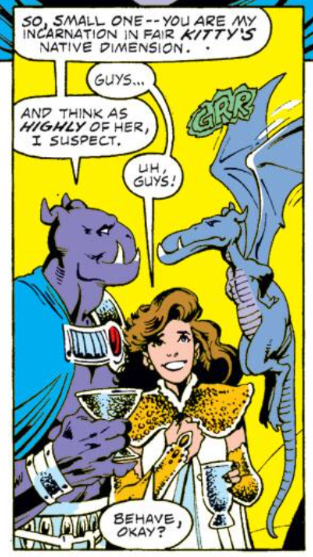 One of the slavers is named Nigel Frobisher, presumably his counterpart in this world (though why he's a fat blue alien here, I dunno).

Young Love
Kitty calls Kymri a "cow" as she flirts with Alistair. 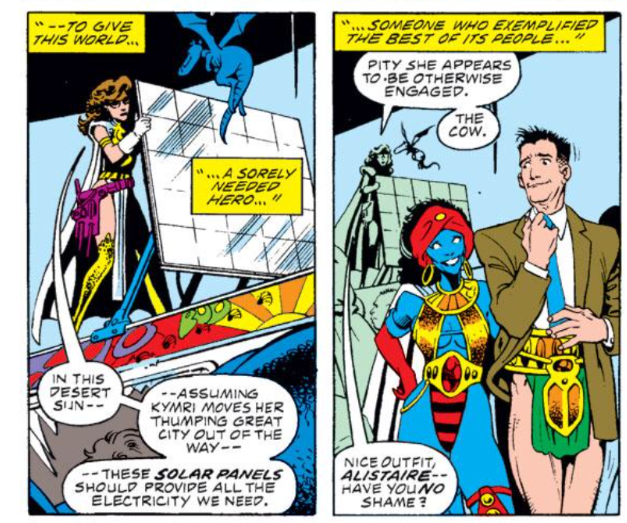 Teebore's Take
Though we're still deeply mired in the "Cross-Time Caper" with no end in sight, this issue is a marked improvement over the previous one, as in and amongst all the ultimately-pointless plot goings-on in this world, Claremont & Davis set aside some time for characterization, giving us something to hang our hats on besides done-in-one (or two) plots. Rachel's reluctance to reestablish her bond with the Phoenix Force is an understandable character beat, and an idea that hasn't ever really been explored before (it's basically an extension of Spider-Man's struggle with the whole "great power, great responsibility" thing). Plus, the reveal that Kitty's been the narrator telling a group of aliens on another world about Excalibur's adventure on the last one is a reasonably fun twist (one that even improves my low appreciation for the previous issue in hindsight), and Davis' Starjammers are pretty gorgeous, even in just one panel. This story still desperately needs to go somewhere other than another random world, but it's at least come back up to the median level of quality for the storyline as a whole.

Next Issue
Tomorrow, Wolverine battles Tiger Shark in Wolverine #19. Next week, more Mandarin fun in Uncanny X-Men #257, followed by, finally, the end of the Asgard story in New Mutants #85.