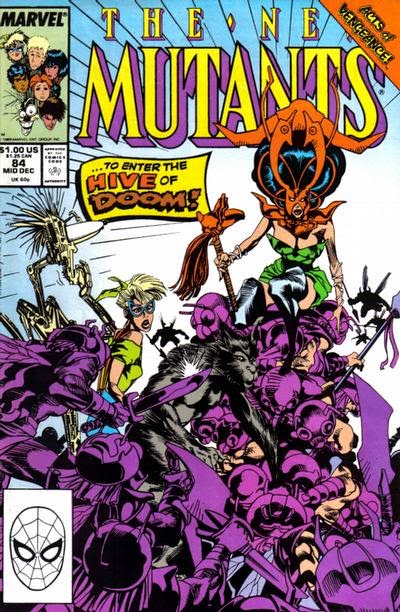 In a Nutshell
The New Mutants acquire allies for the fight against Hela.

Plot
In Hel, the New Mutants wait until Hela's forces retreat, then emerge from the volcanic smoke where they were hiding, protected by Sam's blast field. In Asgard's icy wastes, Tiwaz shows the rest of the New Mutants the location of the Warriors Three, who are being held by Queen Ula and her troll swarm, and they set out to rescue them. Meanwhile, Volstagg's children commandeer Thor's goats to take them to Balder and Karnilla, the Norn Queen, and they warn Balder of Hela's attack. Back in New York, the Vulture receives a package containing a set of wings created by the Tinkerer and uses them to escape his cell, but Rusty burns through his own cell and grabs the Vulture on his way out, trying to stop him. 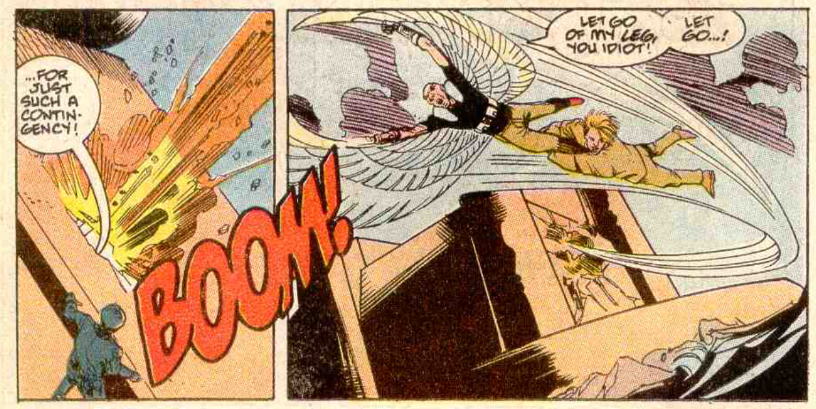 Back in Asgard, Warlock, Boom-Boom and Hrimhari free the Warriors Three, and when Hrimhari tells Ula of Hela's threat, she pledges her swarm to the defense of Asgard. Back in Hel, the rest of the New Mutants disguise themselves in order to blend into Hela's army and get close enough to stop Dani. In Karnilla's castle, Karnilla, with a little help from Tiwaz, is able to bring her subjects, previously turned to stone, back to some semblance of life, and she too pledges her aid to the fight against Hela. The various factions arrive outside the city of Asgard just as a warp opens in the sky above them, through which Hela's army pours out, led by Hela herself, demanding that Moonstar bring her Odin's heart so that all his holdings will be hers.

Firsts and Other Notables
Slapped with the "Acts of Vengeance" logo in the upper right corner of the cover, this issue sees the Vulture escape from prison, along with Rusty, who gets dragged out while trying to stop him. Again, all of this is leading up to New Mutants proper "Acts of Vengeance" tie-in issue, #86, but I hate to imagine anyone picking up this issue because of the tie-in and then only getting two pages of material (involving a character who is specifically said in this issue to have not been invited to participate in the larger "Acts" scheme).

Along with the Warriors Three, Balder (the defacto leader of Asgard in the absence of Thor and the slumber of Odin) and the Norn Queen Karnilla (whom Balder is currently romancing) appear in this issue, and join the fight against Hela. Karnilla's people were turned to stone in Balder's solo miniseries, and regain their mobility and consciousness in this issue (though they're still stone). 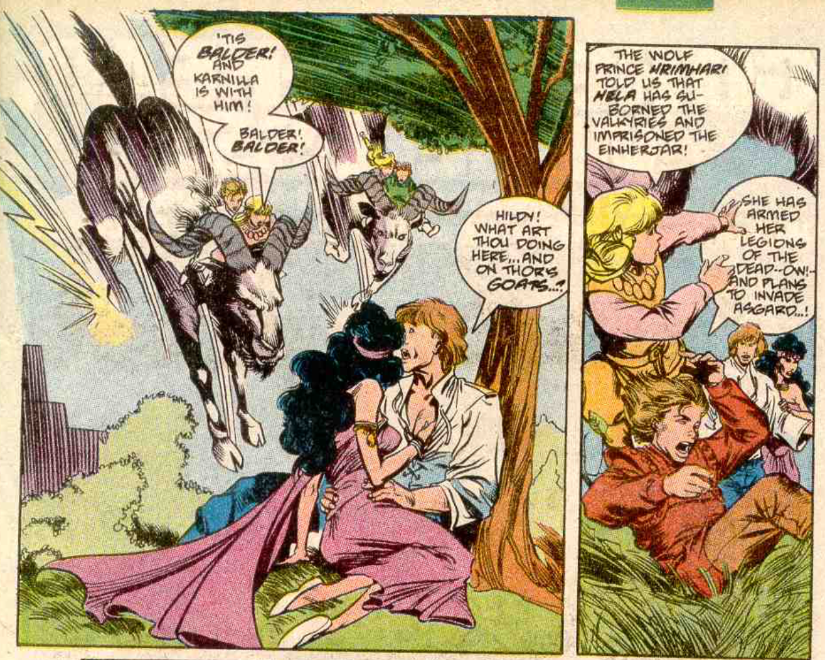 Queen Ula and her Swarm, another group of Asgardian characters, also pop up in this issue and pledge their support to the battle against Hela (apparently, they've had past dealings with Hrimhari, as they're willing to take him at his word). 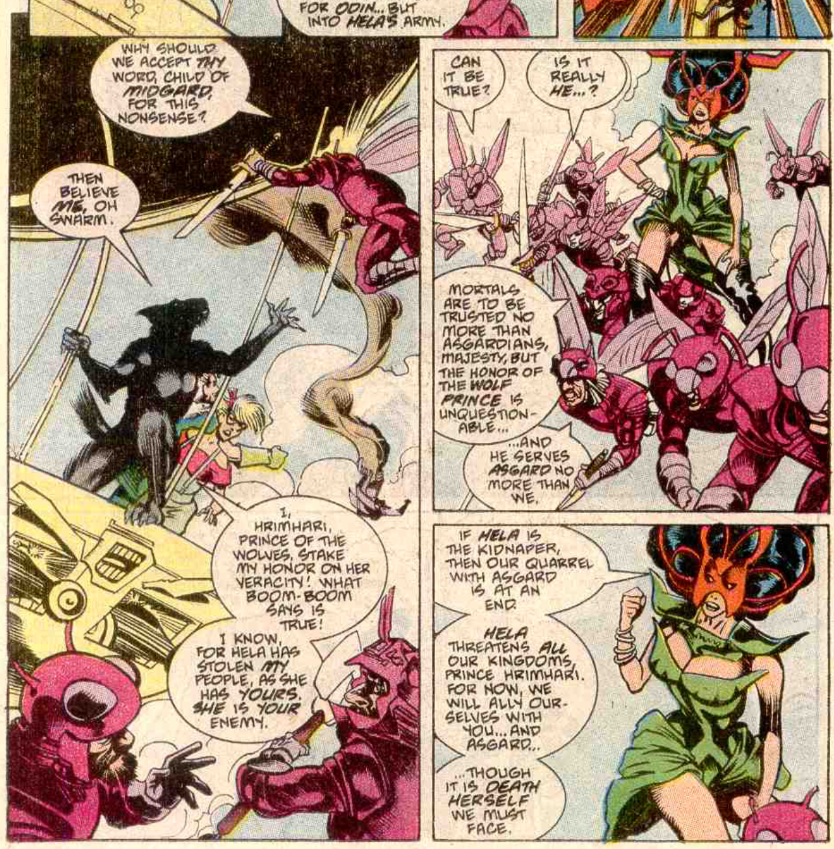 A Work in Progress
Sam keeps the New Mutants alive by extending his blast field around them and somehow hovering out of Hela's sight. I'm not sure "hovering" is consistent with how his power usually works, though. 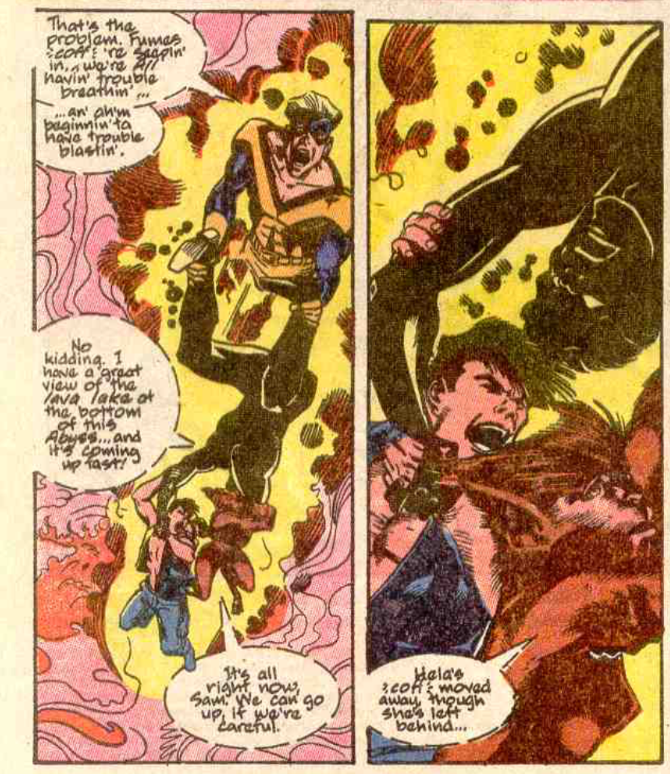 Boom-Boom, appropriately enough, finds Fandal the Dashing, of the Warriors Three, appropriately dashing, discovering something about Asgard she actually likes. 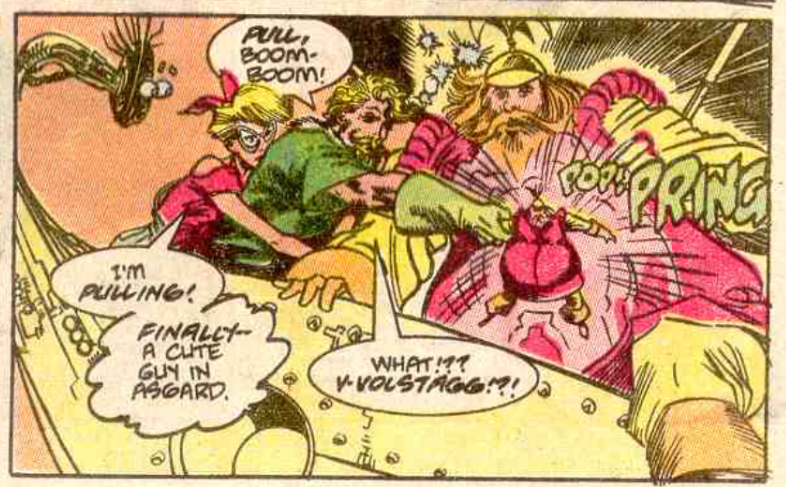 Teebore's Take
Finally, we reach the penultimate issue of this storyline, and as with some previous chapters, there's definitely some pacing problems. After at least two issues of relative narrative wheel-spinning, things suddenly speed up here, making it very clear that the end of the storyline is near: Hela's forces are dropped onto Asgard's doorstep, and every faction outside of Hel (including Volstagg's kids) find success in recruiting allies to the New Mutants' cause (in the case of the Boom-Boom/Warlock/Hrimhari group, they end up recruiting TWO sets of allies). It's tough to criticize this storyline for finally kicking things into gear and moving the plot towards its conclusion in a brisk manner, but it's also hard to not to feel like maybe some of these events could have happened in earlier chapters. This storyline as a whole is definitely an issue or two too long, but it also wouldn't feel quite so long if it was paced out properly, without the back and forth between issues where nothing happens and issues where EVERYTHING seems to happen.