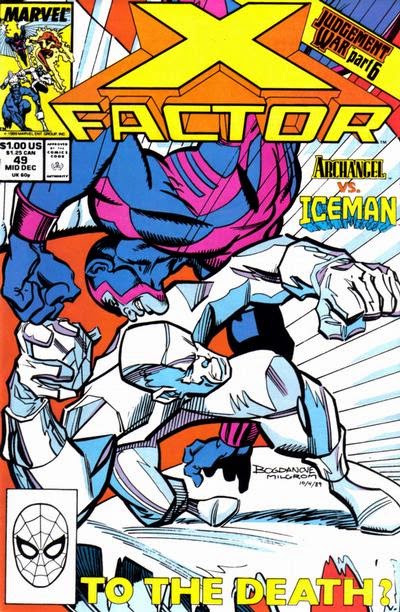 In a Nutshell
Iceman and Archangel battle in the arena.

Plot
As the Chosen stream into the arena in anticpation of the Archangel/Iceman match, Lev continues to take bets against Iceman before flying off to visit him, where he tells her he'll kill Archangel if he can, and assure the ascendancy of the Dualers in the process. Meanwhile, Beast and Agrom lead a group of Rejects into the city through the sewers. They attack a group of guards, hoping to use their uniforms as a disguise, but the guards turn out to be Cyclops and his band of Beginagains, having already done the same. Meanwhile, Palik visits Archangel and blinds him. That way, he explains, Iceman will easily win, foiling Rask's grab for power, but an autopsy will reveal the blindness, which Palik can blame on the Dualers, thus crushing their newfound power. However, a Dualer overhears this and rushes off to warn Lev, but he arrives just as Iceman enters the arena and the fight begins. Meanwhile, on Earth, Apocalypse ponders if the strange alliances amongst Earth's villains are of a sign of the armageddon he's long anticpated. 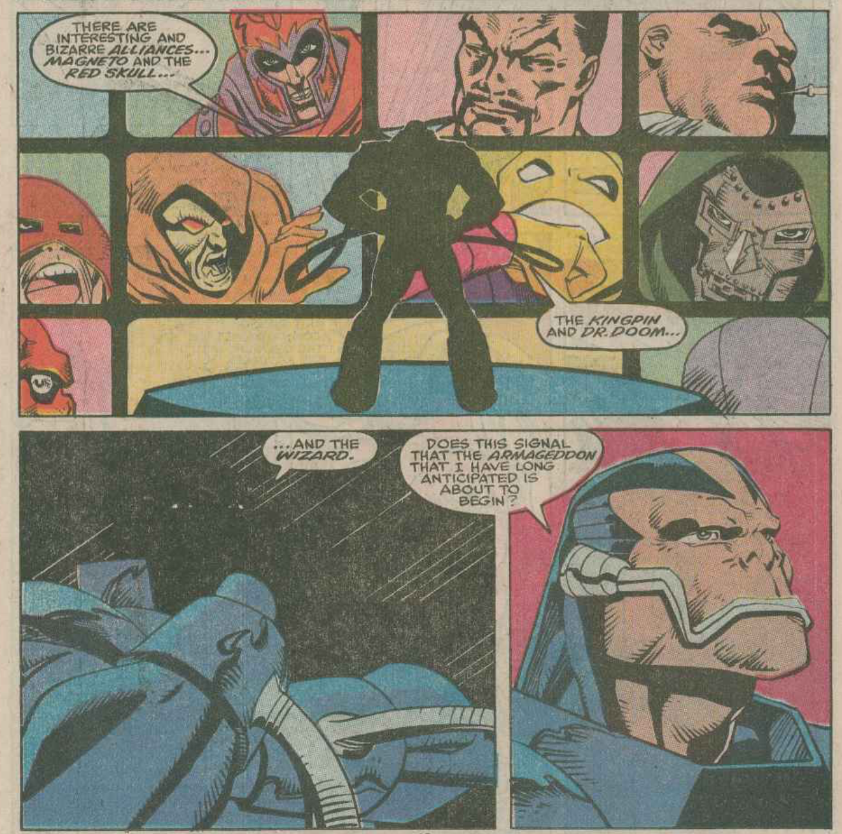 Inside the Chosen city, Cyclops and Beast split up, with Cyclops to rescue Marvel Girl and Christopher while Beast attempts to restore Iceman's memory and end the arena battle. In orbit, Ship heads down towards the planet, determined to save X-Factor if he can. In the arena, Iceman easily overpowers the blind Archangel, until Beast, Agrom and Dykon burst into the arena from below. This ends their fight and forfeits all bets. Rask attempts to kill Seera in the ensuing confusion, but Lev blasts him into the arena and frees Seera, urging her to restore Iceman's memory. She does, and as Iceman comes to his senses, Rask orders the guards to kill everyone in the arena. Back on Earth, Apocalypse is visited by the united villains' servant, who offers Apocalypse the opportunity to join him and lead his Acts of Vengeance on Earth.

Firsts and Other Notables
Apocalypse pops up in this issue, appearing in the series for the first time since issue X-Factor Annual #3, noting the events of "Acts of Vengeance". He'll continue to be a lingering presence in the book for the next few issues, but won't be the chief antagonist of a storyline again until issues #65-68.

Later, Loki appears before Apocalypse (in his guise as the assistant to the Prime Movers, so readers may not have known he was Loki at this time) to offer him a place with the Prime Movers, which provides Apocalypse with an opportunity to make some metatextual comments about "Acts".  However, this issue doesn't get an "Acts of Vengeance" tag on the cover, despite being more connected to the overall story than New Mutants #84 was (or Uncanny X-Men #256 for that matter). 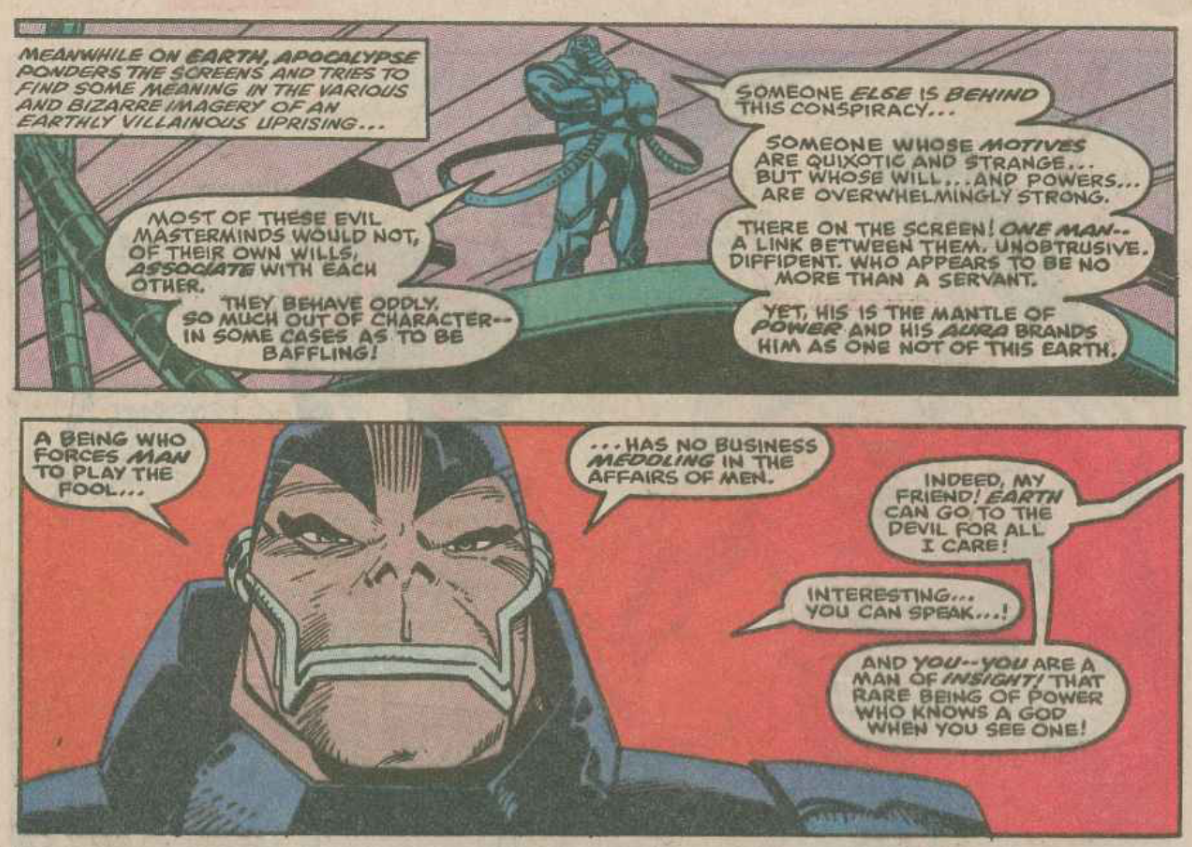 A Work in Progress
It's revealed that both Palik and Rask know that Archangel and Iceman (and presumably Marvel Girl and Christopher) are aliens from another planet, as they've been so informed by the Chosen scientists. 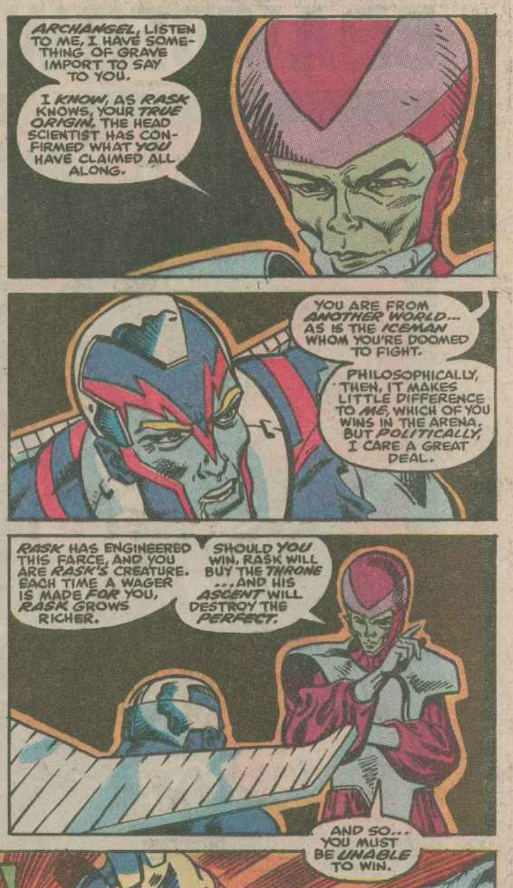 Blinded, exhausted, and still a little drugged, Archangel has to fight to keep his wings from taking control and savagely attacking Iceman. 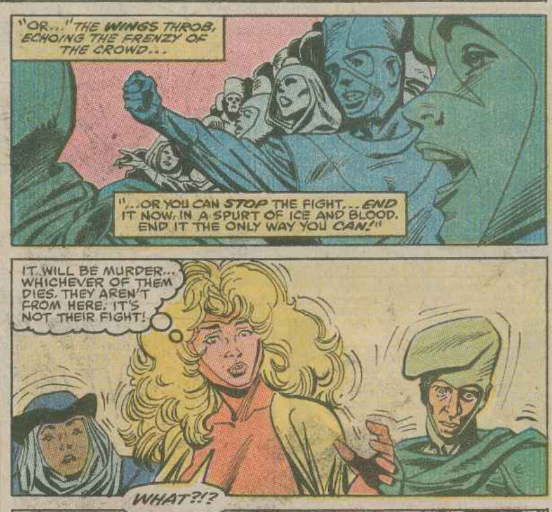 Iceman's memory finally returns by the end of the issue, as Seera is able to use her telepathy to help him remember who he is. 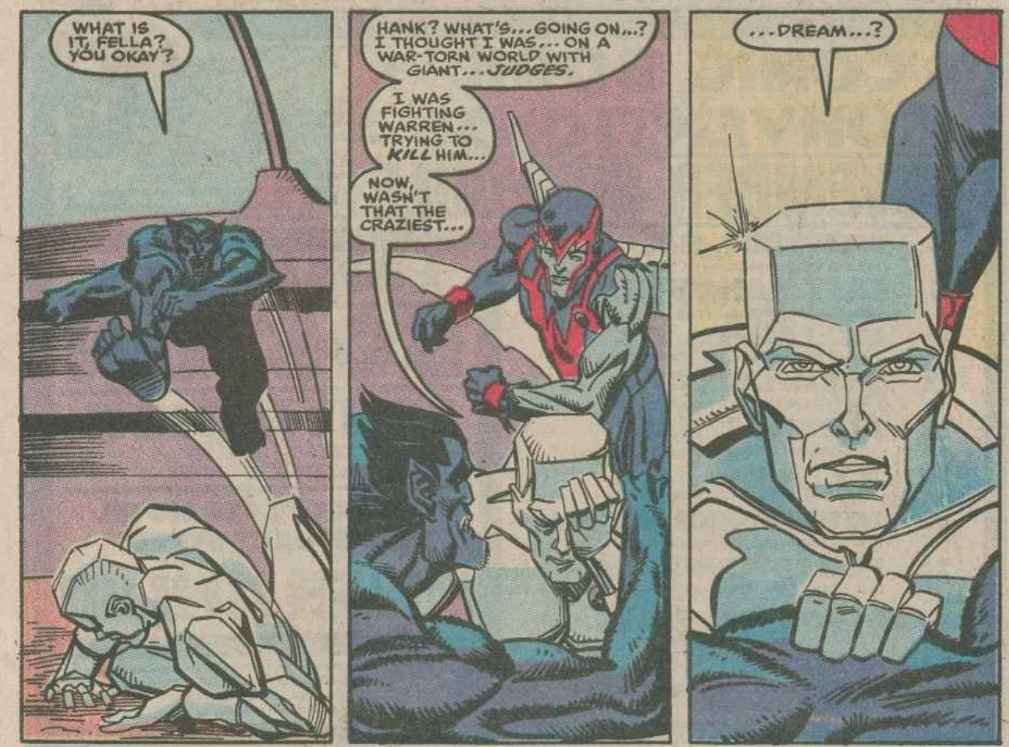 Teebore's Take
Like New Mutants #84, this is the penultimate issue of a long-running storyline. Unlike New Mutants #84, the pacing in this issue and the story overall is much better (or, at least, much more consistent). The Archangel/Iceman arena battle at the center of this issue has been building for several issues now, with the fate of several different characters and factions (as well as any hope for an X-Factor reunion) tied to its outcome. That, combined with the increasing presence of the Celestials, creates a sensation of climax, that all the plot points and disparate characters are starting to come together. It may have been too long in coming, but now that the end is here, it at least feels satisfying (and earned) to get there.