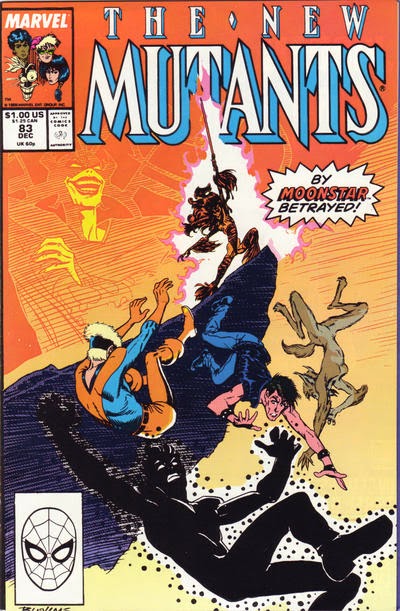 In a Nutshell
Hela gets her sword as the Hel-bound New Mutants seemingly perish.

Plot
Caught by a Frost Giant, Boom-Boom, Warlock & Hrimhari work together to free themselves, but are ultimately saved by Tiwaz, the sorcerer whose help they were seeking against Hela. Watching from Hel, a furious Hela urges Eitri to hurry completion of her sword. As he pulls the finished weapon from the forge, the New Mutants take advantage of Hela's distraction to break free of their chains. With Mist's help, they free the Einherjar from Hela's dungeons and enlist their aid. In the ensuing battle, Sam manages to wrest the sword free from Hela and the New Mutants race off with it. However, Hela's control over Mist is slowly increasing, and she leads them down the wrong path. 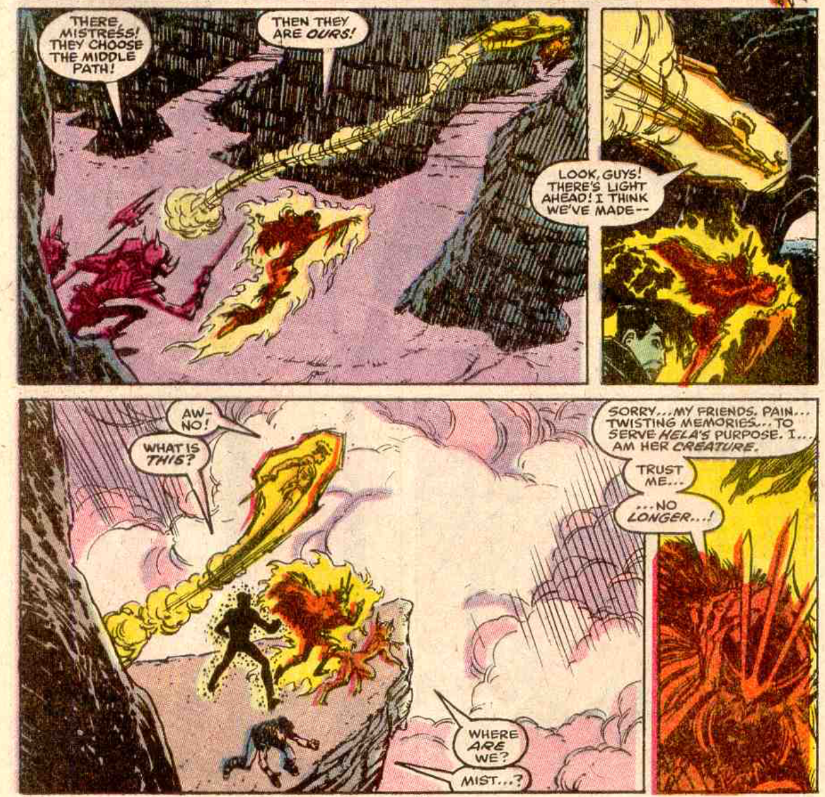 Meanwhile, in New York, an incarcerated Rusty reads about trouble at the Vault prison as a new prisoner is placed in the cell next to him: the Vulture. Back in Hel, the New Mutants are cornered by Dani and Mist, no longer able to resist Hela's control. They are knocked off a cliff, disappearing into the smoke as Hela reclaims the sword. Dani then searches for the New Mutants but finds no trace of them, their bodies lost to the deadly lava in the pit below. In Asgard, the Grand Vizier questions the children of Volstagg, who tells him of Hela's plot. He promises to tell their father of it when he returns, but they aren't convinced he truly believes them, and vow to warn Balder themselves. Just then, Asgard itself trembles as Hela enchants the sword, leaving Tiwaz to worry its power could even fell the World Tree, the source of all life itself.

Firsts and Other Notables
This is Brett Blevins final issue as the regular series artist. The last two issues of this story are handled by fill-in artists, and then Rob Liefeld comes aboard as the new series artist. Blevins leaves without any fanfare or goodbye, which is a shame. I remain mixed in my opinions of his work (with the right inker, it can be quite nice, if not entirely appropriate for this series, while at other times his backgrounds are painfully sparse and his figure work exaggerated to the point of ridiculousness), but there's no denying he left his mark on the series, giving it a look as distinct in its own way as Sienkienwicz and earning a place as one of the series' three defining artists.

Rusty is shown to be in a regular jail, somewhat curiously given that Freedom Force was mostly concerned with capturing him so he couldn't spill the beans about their plans for the Inferno babies. He is currently biding his time, hoping he'll be able to expose Freedom Force during his trial. 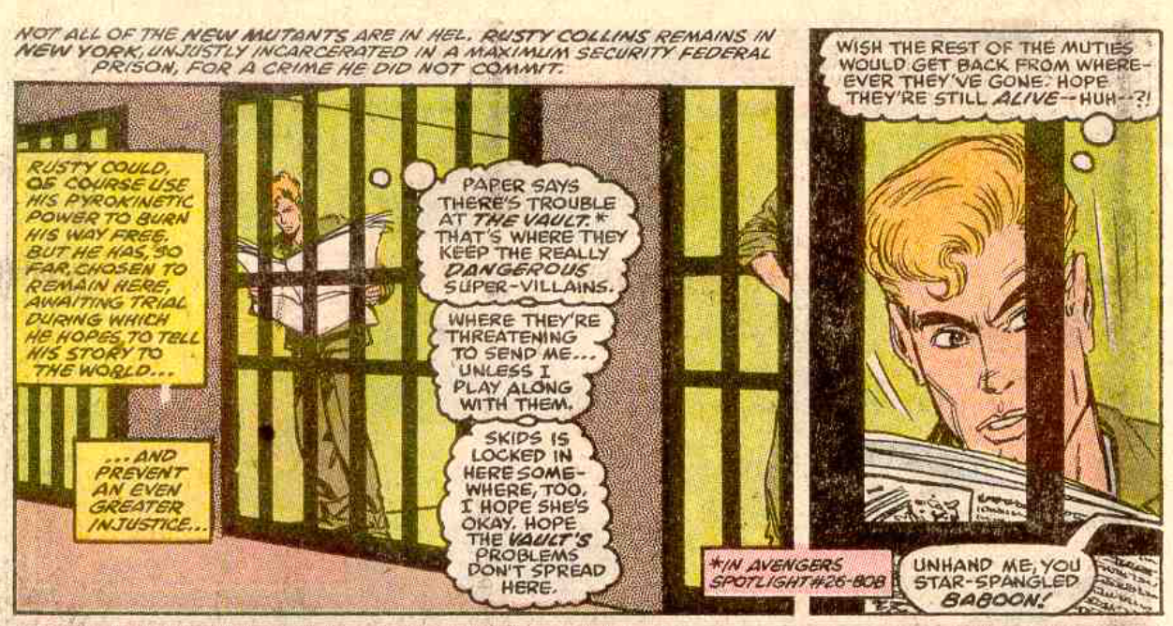 The events of Avengers Spotlight #26, which kicks off the "Acts of Vengeance" storyline, are referenced, and Spider-Man villain the Vulture ends up in the cell next to Rusty, a setup (along with the article Rusty's reading about Nitro) for this series' contribution to that storyline. 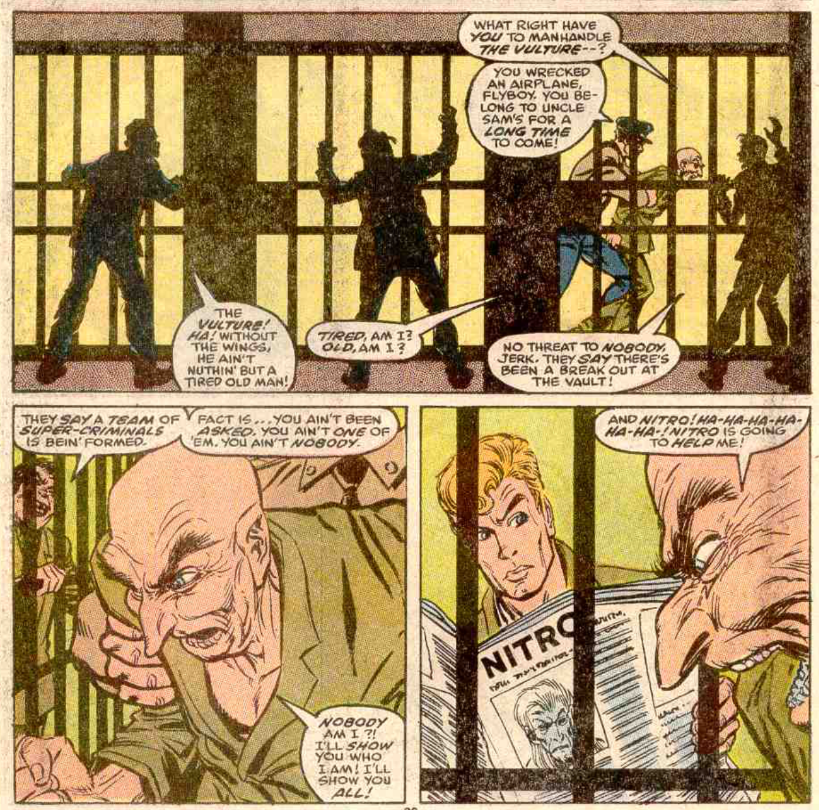 Tiwaz, another character from Thor, appears in this issue, helping out Boom-Boom, Warlock and Hrimhari. 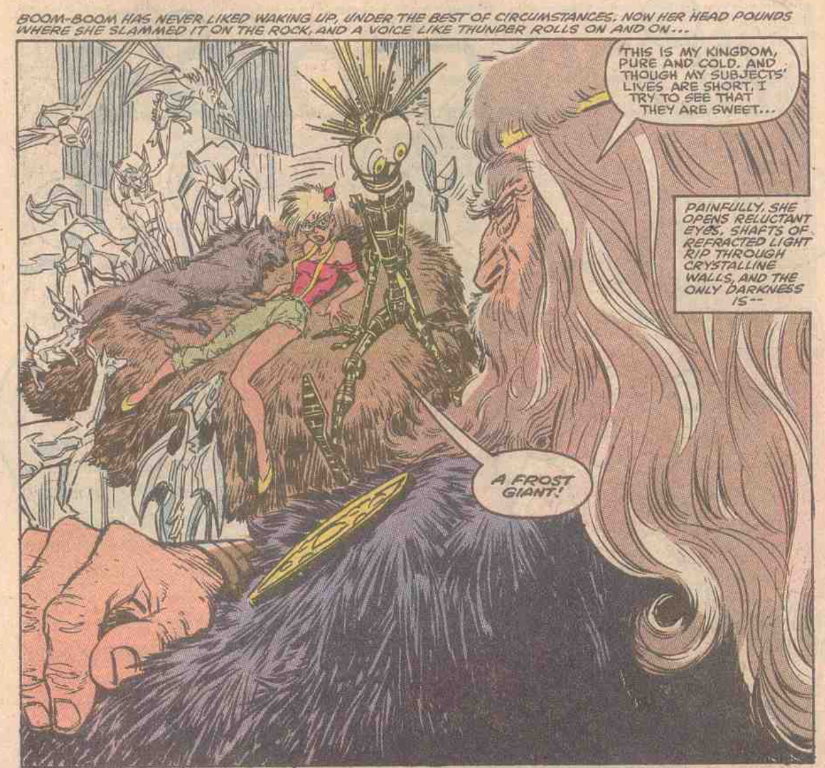 Also appearing are the Einherjar, the Asgardian warriors taken to Valhalla by the Valkyrie, whom the New Mutants free in order to gain their aid against Hela (who presumably captured them off panel when she took control of the Valkyrie). Amongst their number is Skurge the Executioner, a former Avengers villain who gained a measure of redemeption and no small amount of affection amongst comic fans when he assisted Thor and the Einherjar in rescuring mortals wrongfully taken to Hel by Hela, sacrificing himself in holding the bridge alone at Gjallberbru against Hela's forces in order to buy time for Thor and the others to escape. 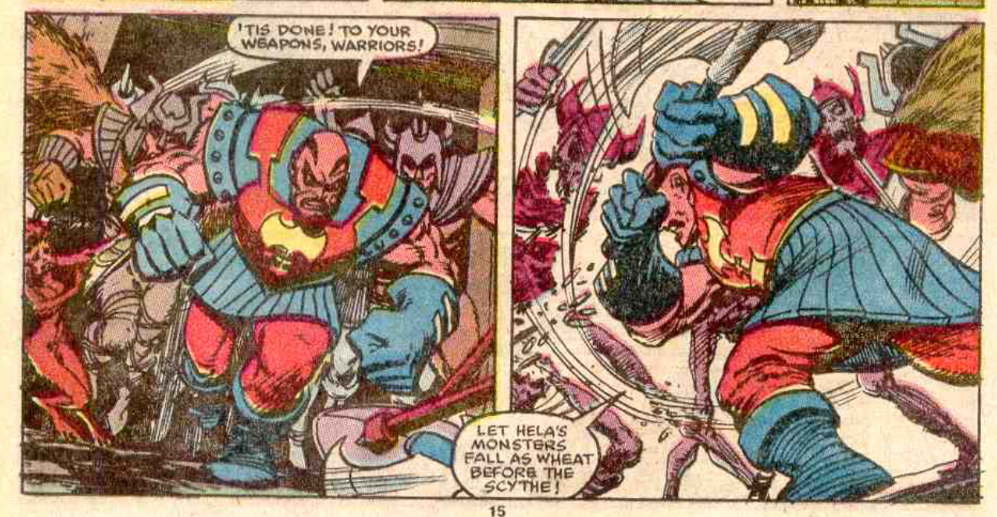 A Work in Progress
Rictor uses his power to quietly vibrate the molecules of his manacles, enabling himself to break free. 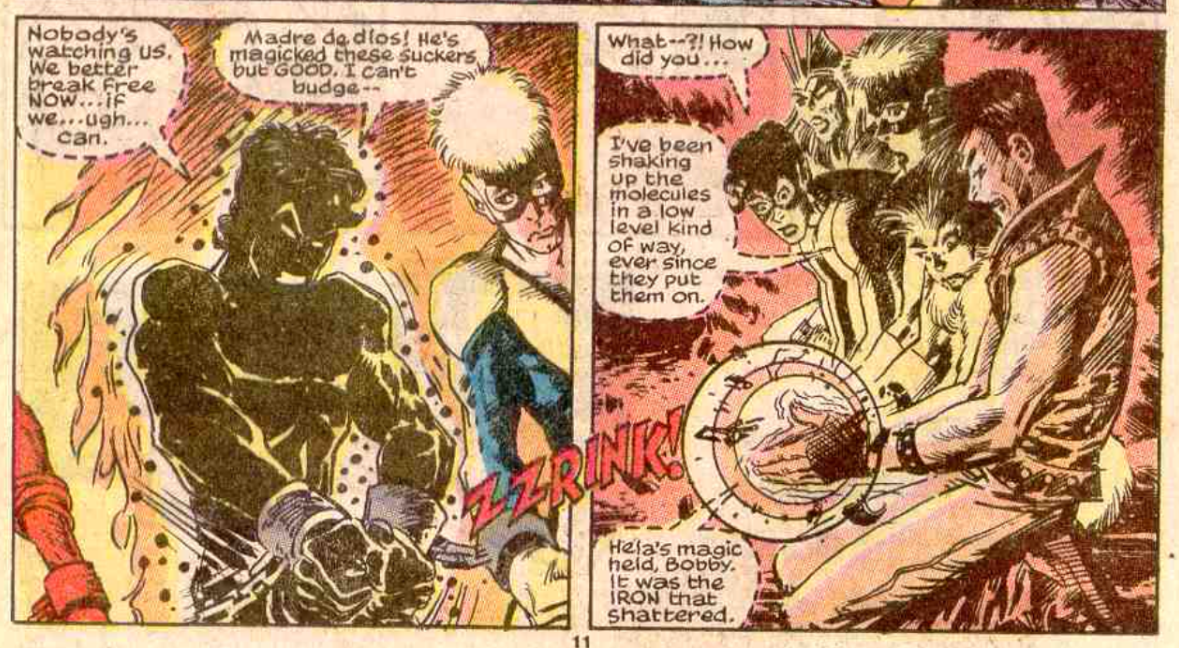 Teebore's Take
While the narrative still feels terribly strung out (last issue, Hela wants a sword. This issue, Hela gets a sword), this issue benefits from a level of focus lacking in the last one. With Boom-Boom, Warlock and Hrimhari relegated to the issue's opening and closing pages, the majority of the action is centered on Hel and the New Mutants there as they attempt to steal Hela's newly forged sword and prevent her from killing Odin. The downside is that there isn't as much room for characterization, as fleeting as those moments may have been, as in the last issue (though Rictor does get to use his powers in a a fun Claremontian fashion), which means its entirely down to the plot and the art to carry the issue. The latter is somewhat improved as Blevins, in his last issue of the series, goes out with a relative bang as he inks himself, adding a surprising level of detail in places, but there's only so many times an issue can end with Asgarda perched on the edge of destruction, trembling at Hela's might, before the yawns can no longer be stifled.