The Walking Dead 5x10: Them 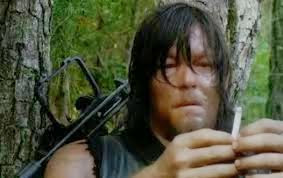 I think this week's episode of The Walking Dead should've been sponsored by the Mars candy company. Because everyone was hungry, crabby and in need of a Snickers. Of course, in this case it wasn't a caramel, peanuts and nougat candy bar that satiated everyone but dog meat. The Walking Dead everyone!

Actually I have very little to say about this episode. Not a whole lot happened. The group was on the road, struggling to survive and sad because, as we discussed last week, living in the zombie apocalypse sucks. That was pretty much the episode.

Daryl, Maggie and Sasha are all mourning Beth/Tyreese in their own ways. Daryl needed to find a private place to cry. Maggie just took her anger out on a cowardly priest. Sasha alienated everyone with her words and actions. She disregarded strategy in favor of head on combat with a horde of zombies. Rick and company help her out and nearly get killed in the process. Way to go Sasha.

In the end the mourners mourn but move forward. The group finds the will to live thanks to a grandiose speech by Rick who pretty much tells them that their reason for living is to find a reason for living. A freak storm nearly kills the team but actually ends up saving them from zombies. Aside from character developments, the only plot point to occur was the ominous, mysterious stranger introducing himself at the end of the episode. He seems nice...but a lot people on The Walking Dead SEEM nice.

All in all, this wasn't a bad episode. Unfortunately, there's not a terrible amount to analyze. However, I do have one complaint. The narrative timing of this part of the series doesn't seem to match up with the actual, in-story timing.

To the viewer, we had Beth die, then Tyreese and then an episode dealing with the aftermath of both deaths. I will first say I disagree with this decision by the writers. Having two main characters die in back-to-back episodes but saving the mourning of both characters for the same episode diminishes the weight and significance of both deaths. But that complaint may just be a matter of personal opinion.

What really bothers me is that, while both deaths were close together from a viewer's perspective, they really weren't that close in the story. Beth died three states ago. You'd assume during those travels is when most of the Beth mourning and discussions of Beth would take place. I suppose people could have bottled up their emotions that entire time but that's hard for me to believe considering the only thing the people in the group really have to do all day is talk.

Then again, I'm not expert on grief. Also, I speak of timing as if The Walking Dead gives us any indication of how much time has passed or how fast the group is traveling. So maybe I should just enjoy the character moments and start speculating on what this mysterious stranger has to offer.

Other Thoughts:
Maggie looks different to me. I'm not sure if it is a new haircut or what but for a split second I didn't recognize her.

When I saw Daryl scrounging for food and eating a worm my only thought was, "Somebody dedicated their time and skills to farming doesn't seem so ridiculous now, does it?"

I'm sure some people will object to dogs being shot and eaten. I don't know, they've eaten other animals so why not dogs? Animals are animals, right? Especially when you're literally starving.

Hey! We finally get see Maggie react about Beth!

Some people seem to distrust Father Gabriel. I think what we see is what we get. A scared, cowardly priest.

Rick's group was wary of the bottles water left for them. If someone's sneaky enough to deliver water without anyone noticing then they probably could find easier ways to kill Rick's group than through poisoned water.

So, Rick makes a grandiose speech in which he declares that it is in fact they who *sigh* are the walking dead. I'm surprised they decided to hang that lantern during a seemingly random season 5 episode.

If a stranger walks up to you saying they have good news then it's a good bet you're going to hear all about Jesus.
Newer Post Older Post Home
Posted by Dr. Bitz at 2:03 AM