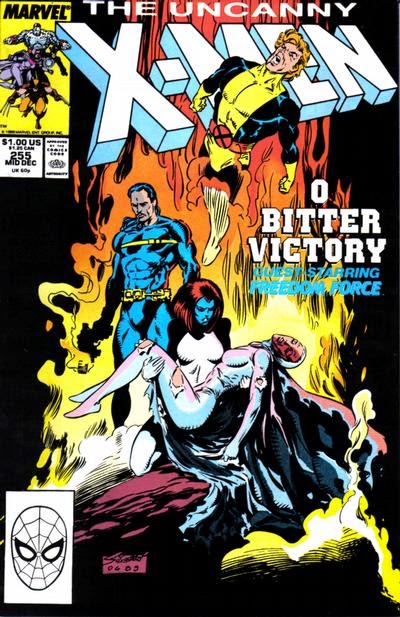 In a Nutshell
Destiny is killed as Freedom Force helps repel the Reavers' attack on Muir Island.

Plot
On Muir Isle, Banshee joins the battle against the Reavers, destroying Bonebreaker's chassis then rescuring Lorna from Pretty Boy. However, as the pair try to free, they're knocked unconscious by an invisible wall and taken captive by the Reavers. In Cairo, Illinois, Jacob Reisz arrives to claim the young mutant girl, but he and Dr. Shen find her missing. On Muir Isle, Freedom Force arrives, dropping Blob and Avalanche into the fray, but Lady Deathstrike attacks and crashes their plane. On an island in the South China Sea, Matsuo Tsurayaba arrives at a Hand base where an amnesiac Psylocke is being held. Back on Muir Island, Forge pulls Mystique free of the plane wreckage as Pyro contains the flames. Mystique orders Forge to guard Destiny, while the rest of the team engages the Reavers. But Lady Deathstrike guts Avalanche while Reese traps Blob in quicksand, and Destiny insists that Forge is needed elsewhere to protect Mystique, ordering him away just as Legion arrives.

Elsewhere, Mystique, disguised as Lady Deathstrike, attacks Cole, Macon and Reese but is caught by Pierce. Just then, she telepathically experiences Destiny's death at Legion's hands as Stonewall separates Mystique from Pierce. They grapple, and Pierce kills Stonewall, just as Legion snuffs out Pyro's flame. He and Mystique appear done for as Forge, sniping from a nearby hill, destroys Skullbuster. Lady Deathstrike convinces Pierce to cut their losses, and they teleport away just as Forge lines up a head shot on Pierce. As Mystique attends to Destiny's body she tells Forge he now owes her two, a debt he will repay in full measure. Later, Banshee asks Forge to help him seek out the missing X-Men. In Illinois, the young mutant girl races through the hospital, pursued by Reisz, Dr. Shen, and another doctor. From the shadows she watches as Reisz kills one doctor, then turns to Shen, declaring that she will be his just as Storm soon will be.

Firsts and Other Notables
Psylocke, the last member of the X-Men to enter the Siege Perilous in issue #251 is the first to come out of it, as we see her having been found by the Hand in this issue. She is amnesiac but still telepathic and immune to electronic detection, and her fate will be the focus of the next three issues. 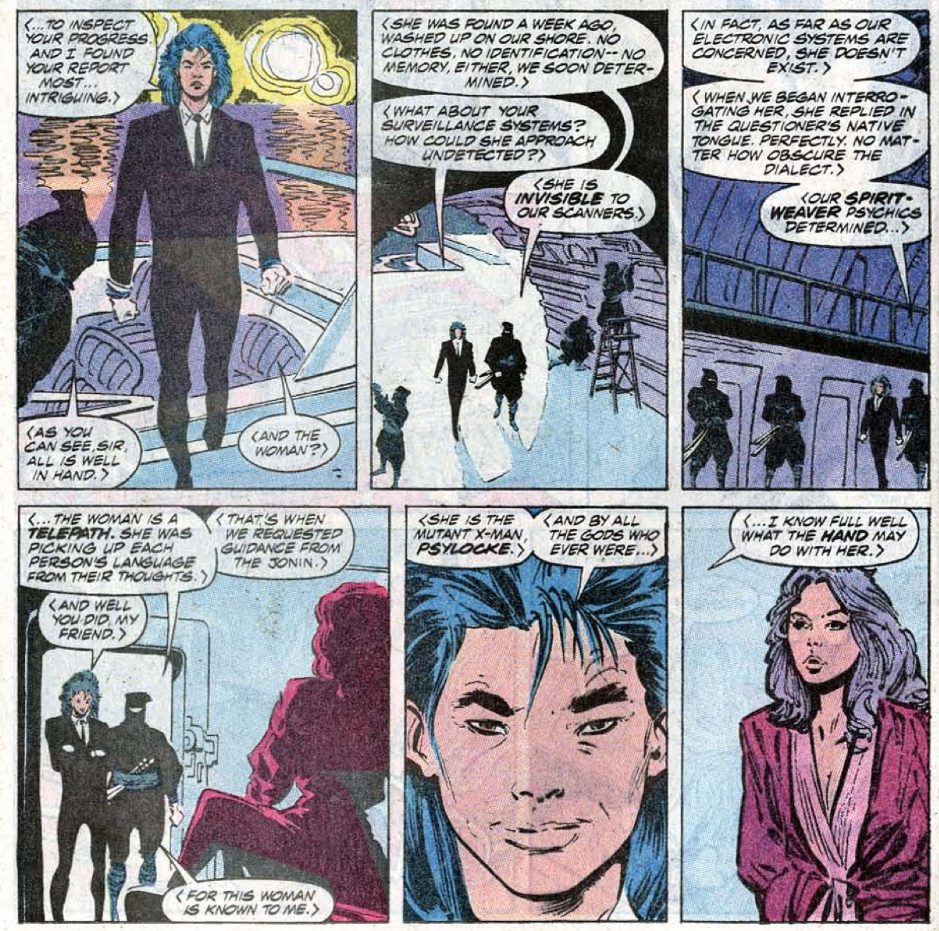 Matsuo Tsurayaba, a Japanese gangster and member of the Hand, makes his first appearance in this issue. He'll play a pivotal role in Psylocke's upcoming transformation, then hang around as a recurring villain in both X-Men and Wolverine throughout the early 90s.

Lots of death in this issue. Destiny is killed off panel by Legion, an event she allows to play out as she sees that doing so spares Mystique. This isn't quite the last we'll see of her, as she'll pop up again, in a manner, during "Legion Quest", the storyline that kicked off "The Age of Apocalypse", and her diaries, in which she wrote down her various visions of the future, will serve as the initial impetus behind Claremont's X-Treme X-Men series in the 00s.

Freedom Force member Stonewall is also killed this issue. As far as I know, he's stayed dead (though he popped up as one of Selene's zombies in "Necrosha"), and his death doesn't have nearly the impact as Destiny's. 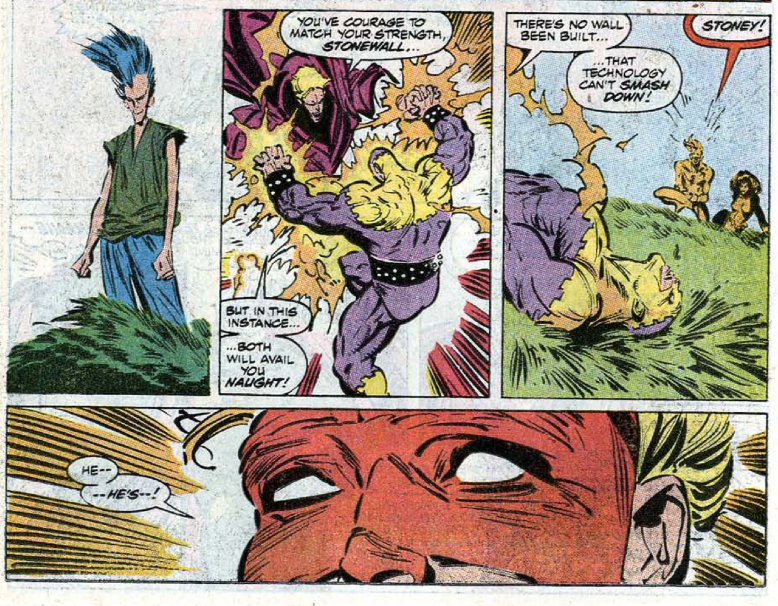 Skullbuster is destroyed by Forge, the Reavers' only significant loss. He'll be resurrected in the 90s, but the Reavers move on and begin building a new Skullbuster after this issue. 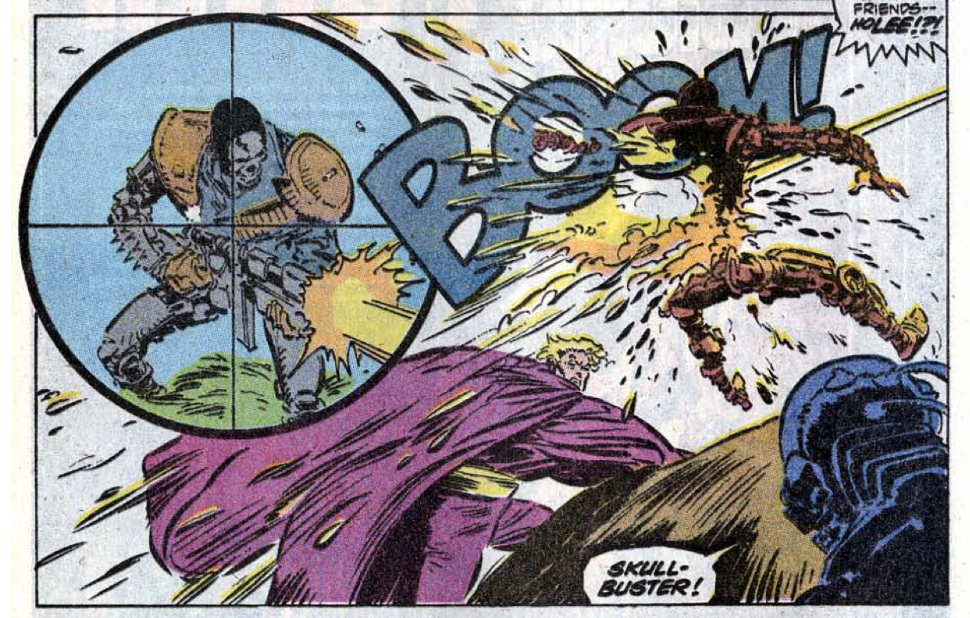 Banshee, told by Lorna that the X-Men are alive, asks Forge, who has his own belief that Storm, at least, is alive, to help him track down the X-Men, kicking off their partnership that will occasionally be given the focus of the series moving forward. 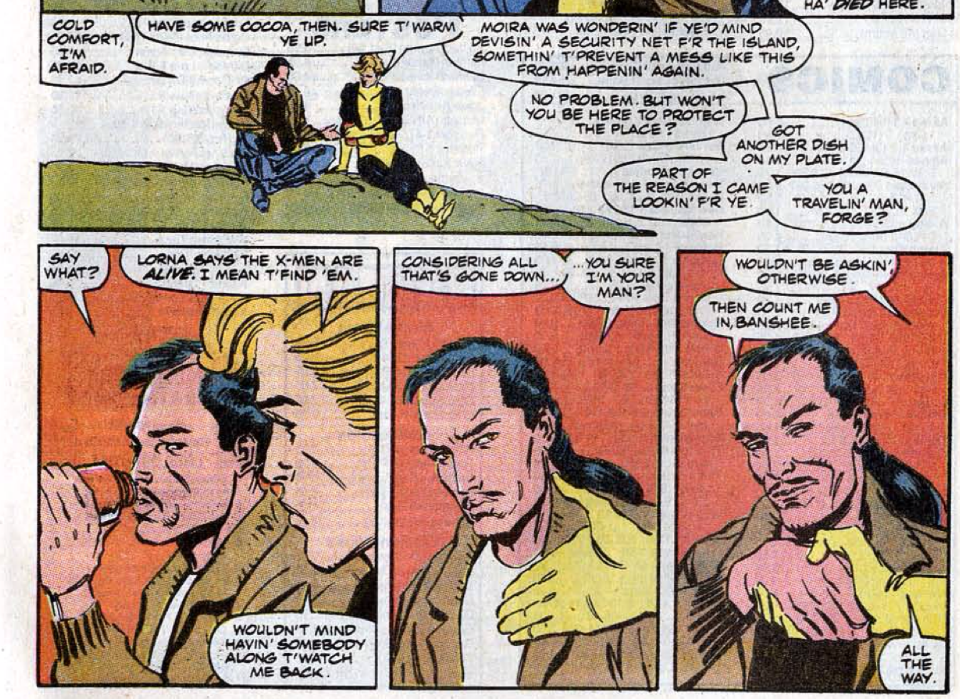 A Work in Progress
Banshee notes that his power was restored by the Morlock Healer last issue, which could arguably be true (perhaps the Healer cemented the process begun by the Retribution Virus) but still doesn't offer up an explanation to readers as to how Banshee was using his powers in issue #253. Lorna notes that if she had her magnetic powers, she could make short work of the Reavers, and it's hard not to imagine this is Claremont writing a bit of the thought process behind changing her powers into the story.

Banshee refuses to kill the Reavers, noting that while he once would have had no compunction against doing so, he is now determined to walk Charles Xavier's path.

Avalanche is referred to as Janos by Blob (his actual first name is Dominic) and he is seemingly killed by Lady Deathstrike, but he'll turn up alive and well in future issues. 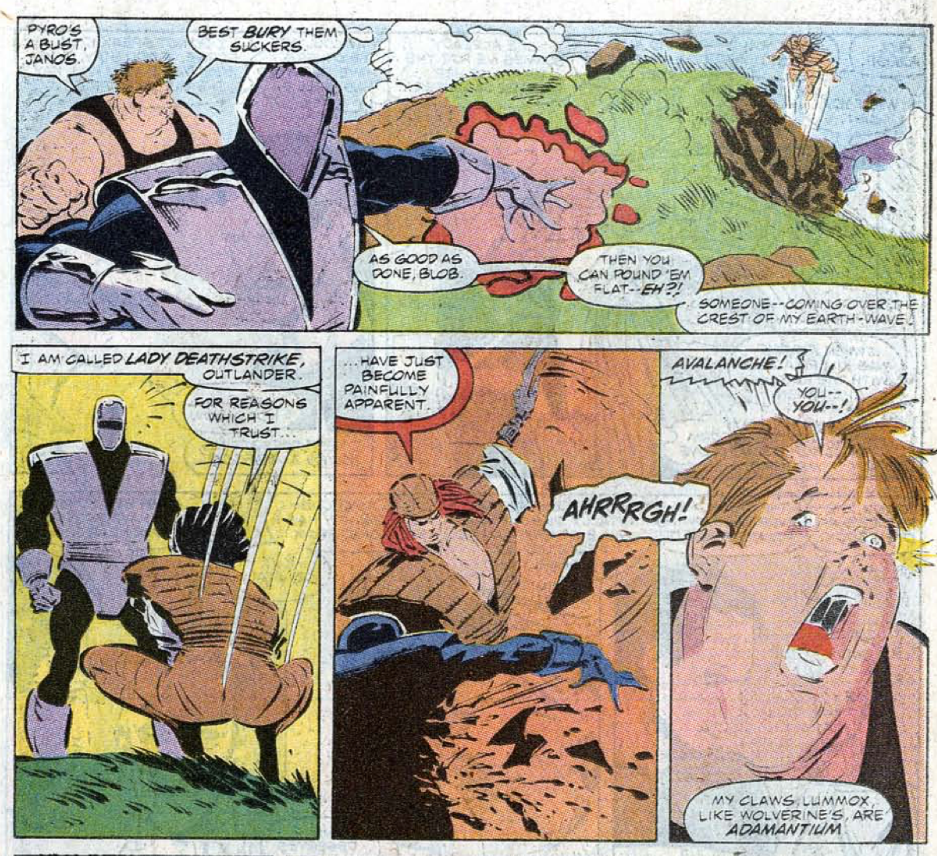 Destiny continues to hint at Forge and Mystique's future together, strongly implying the two will become romantically linked (which doesn't quite come to pass). 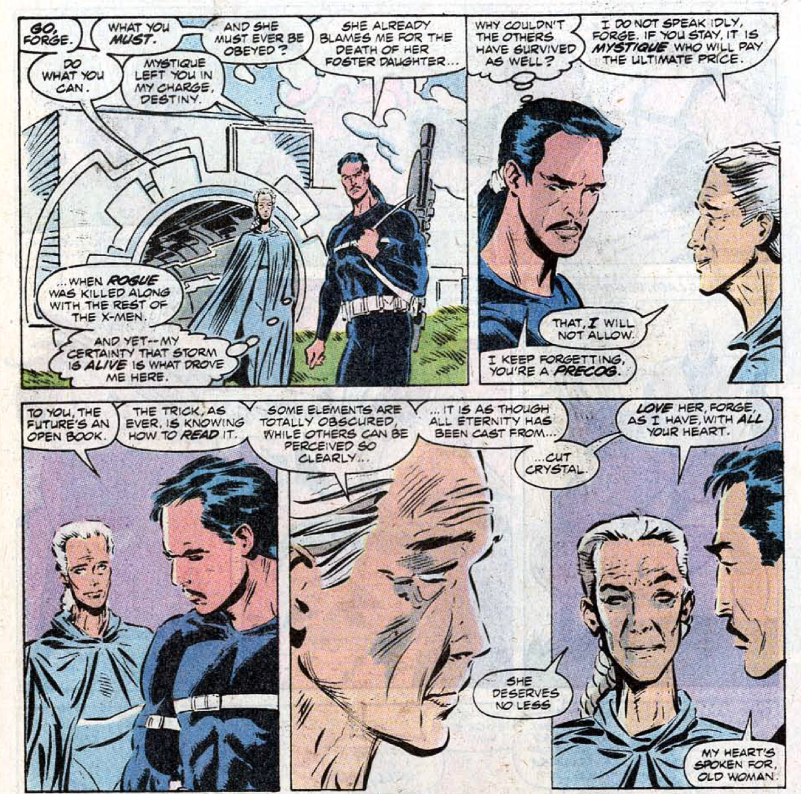 Crimson Commando, Super Sabre and Spiral are said to be off on another mission, though I don't believe we ever see that mission depicted anywhere.

Psylocke washed up at a Hand base that once belonged to crimelord Emile Vachon, until he died in Deadly Hands of Kung Fu #32-33. The restoration of Banshee's powers doesn't get a footnote, but that does. 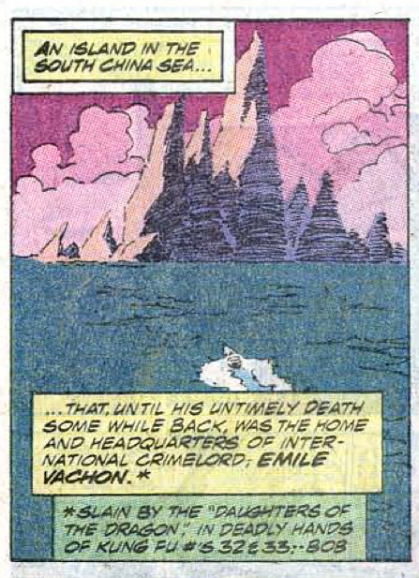 Pyro's secondary career as a writer, previously established in his Marvel Handbook entry, gets referenced in this issue, as he and Mystique are attacked just prior to Forge's intervention. 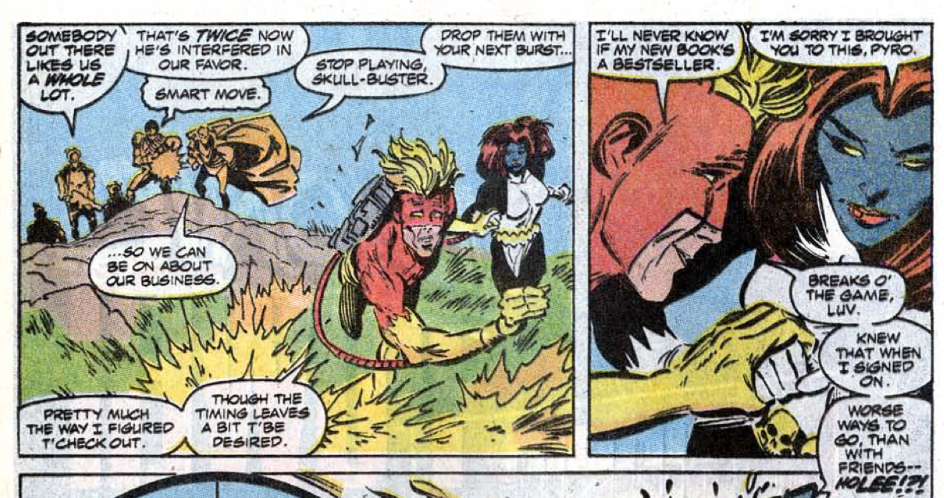 Forge notes that while his power allows him to build anything he can think of, he still has to complete the necessary steps to get there, and can't just magically materialize whatever gadget he needs. 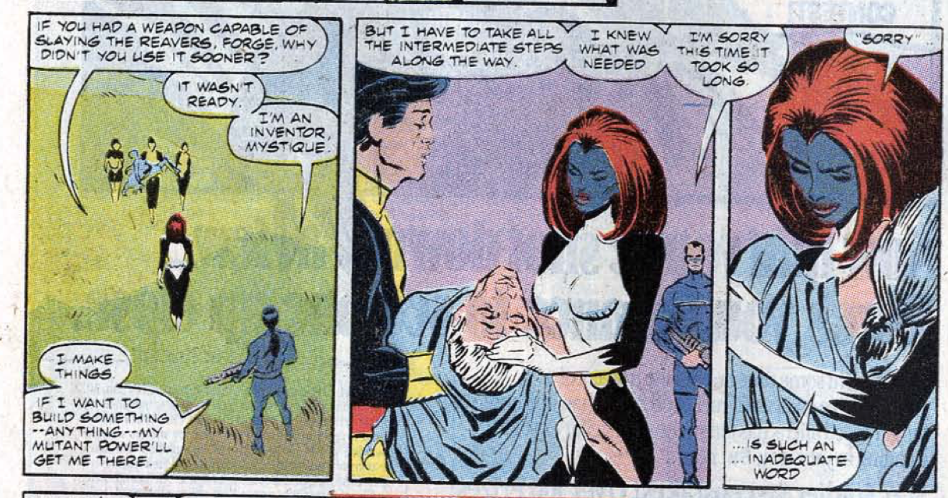 Banshee and Forge share some cocoa after the fight with the Reavers. I'd think they'd both want something a little stiffer after the day they've had.

The Reference Section
Novelist Pyro and Stonewall debate the merits of James Joyce, whom Banshee was seen reading in earlier issues of the series. 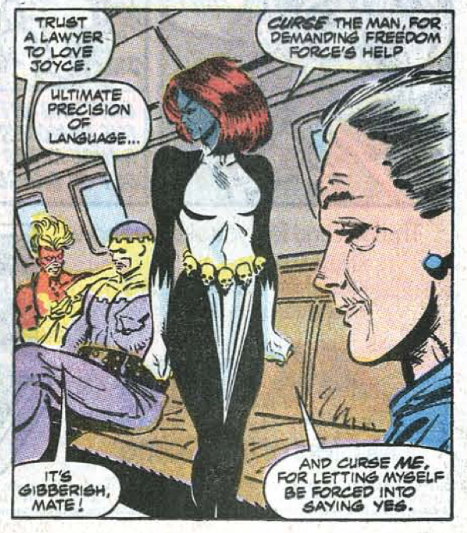 Artistic Achievements
Blob makes a great entrance into the battle on Muir Island. 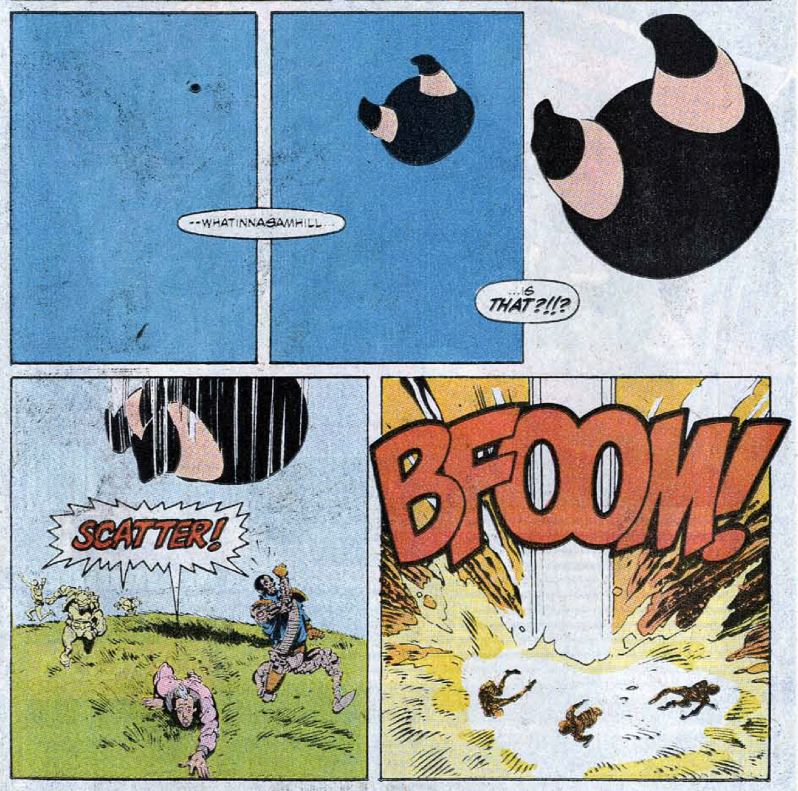 Young Love
Mystique says it's no fun being with someone who can see the future, perhaps the most overt acknowledgement of Mystique and Destiny's relationship we'll ever get from Claremont in-story.

For Sale
Once upon a time, I had the Simon's Quest handheld game. It was irritatingly-repetitive. 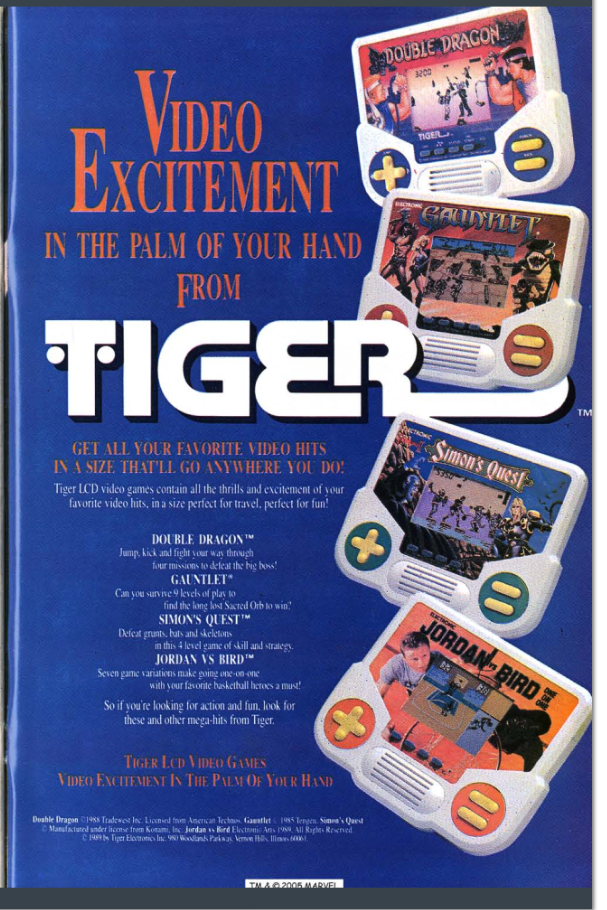 It's in the Mail
A response to a letter in this issue spells out that Storm has been reduced to childhood by Nanny (though doesn't get into why or how). The Starjammers Marvel Comics Presents story is teased again, and Jim Lee is said to be on stand-by to fill-in for Marc Silvestri as needed, following his upcoming guest stint on the series.

Teebore's Take
Essentially one long battle scene, this issue wraps up the Muir Island X-Men's introductory tale, as well as the larger "Dissolution and Rebirth" storyline. It also marks a swan song, of sorts, for Freedom Force, the Reavers, and, somewhat ignobly, the just-formed Muir Island X-Men. This is Claremont's last time writing Freedom Force as a cohesive unit (Mystique will pop up again in X-Men, and we'll see the rest handled by other writers in other places, but Claremont is done using them as a team), while this issue marks the end of the Reaver's most potent attack on the X-Men (Claremont will return to them throughout the Non Team Era, but they won't again coalesce into coherent threat before he leaves the series).

As for the Muir Island X-Men, they, too, will stick around, part-time players in the book along with so many others, but their brief days as a semi-organized force for good are over, as they become the biggest sowers of Claremont's next big, and ultimately unfulfilled, story arc. Between the nearly end-to-end action, deaths, and final moments for some significant characters, this issue feels suitably like the end of an era, even though it doesn't actually feature (one silent post-Siege cameo aside) any of the series' title characters, which is a rather remarkable achievement and a testament to just how deep a bench if supporting characters Claremont has crafted during his time on the book.

Next Issue
Tomorrow, Hela gets a sword in New Mutants #83 and Friday, "Judgment War" resumes in X-Factor #48. Next week, "Acts of Vengeance" tie-ins, part 1.