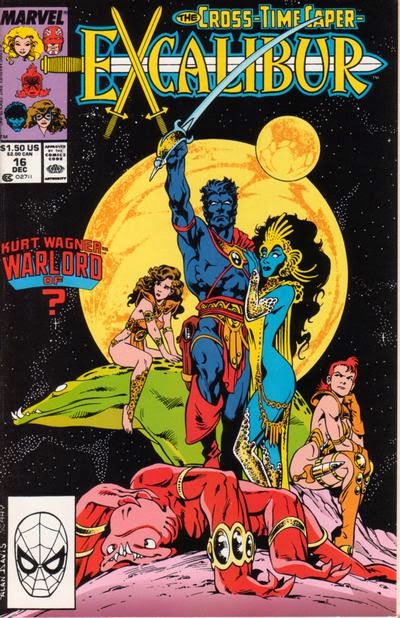 In a Nutshell
Excalibur lands in a pulpy alien world.

Plot
In a bar filled with strange creatures, an unnamed narrator tells the story of how Nightcrawler fell from Excalibur's train, landing on a skyship in the midst of a pirate attack. Siding with Anjulie, the woman seemingly being attacked, he fights off the pirates, but is knocked out from behind by Anjulie. Meanwhile, Rachel and Kitty awaken, powerless, inside a smokehouse. Kitty uses her martial arts training to free them, just as an alien cook arrives to kill them. They knock out the cook, but the fight spills out into a restaurant where a band of warriors is dining. Impressed by Rachel and Kitty, they induct the women into their confederacy. Meanwhile, Nightcrawler awakens in a bath along with Anjulie, who is quite affectionate towards him, though Nightcrawler grows suspicious of the woman. 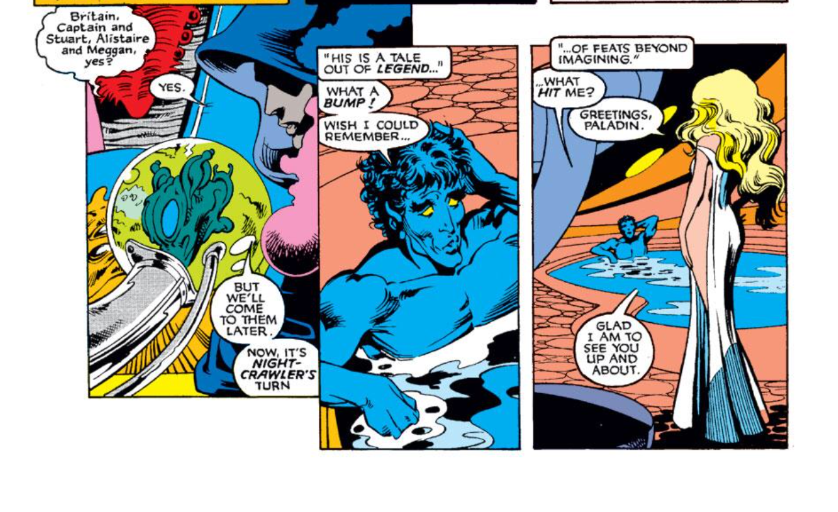 Elsewhere, Alistair is chased by a group of bounty hunters, but is rescued by Kitty and Rachel. However, they are soon captured by a skyship flying overhead. Aboard that ship, Nightcrawler secretly follows Anjulie to the dungeons, where he finds the Kymri, pirate captain he defeated earlier, and learns the truth about Anjulie. Together, they follow Anjulie to her master, a large tentacled creature feeding on the rest of Excalibur. Nightcrawler is able to free Rachel and Kitty, and when Anjulie attempts to kill Kmyri, Kitty is forced to kill Anjulie. Realizing the creature seems to be afraid of Rachel, Nightcrawler reasons her power may be able to overload it, and tosses her into its mouth. A desperate gambit, the narrator affirms as her story pauses, as it runs the risk of giving the creature access to all the power of the Phoenix.

Firsts and Other Notables
The world of this story is generally based on early pulp sci-fi novels, specifically Edgar Rice Burroughs' Martian Chronicles, though I didn't notice any specific or overt references to anything in particular. Then again, my knowledge of that material is spotty, at best, so if anyone knows otherwise, speak up.

Kitty kills Anjulie in this issue, an act, I'm led to understand, which will haunt her moving forward. 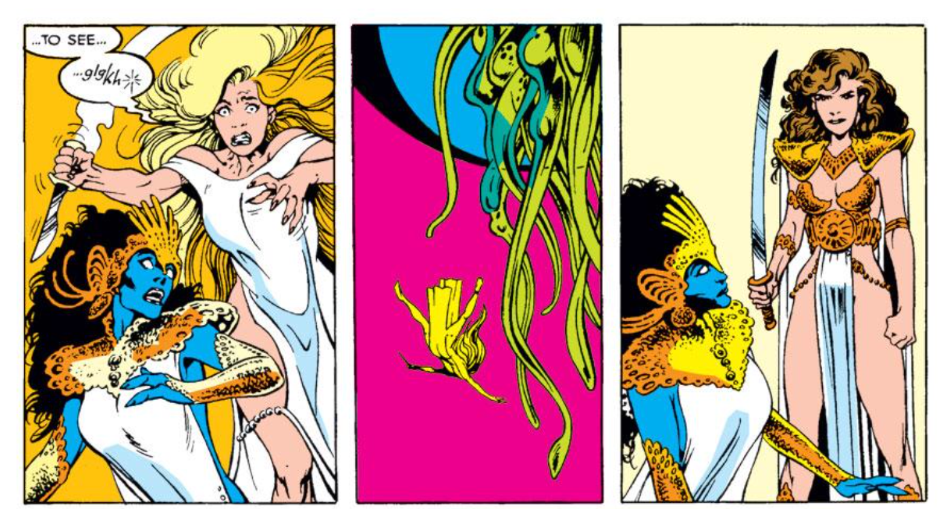 A Work in Progress
Kitty references her ninja training, from the Kitty Pryde & Wolverine limited series. 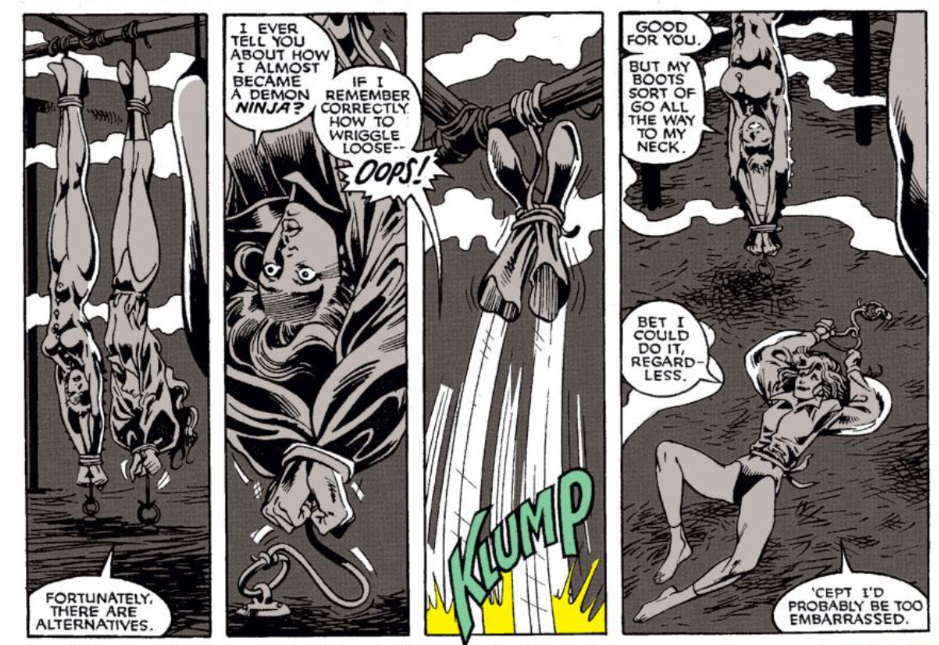 She also ends up in another risque outfit, though she's more embarrassed by this one. 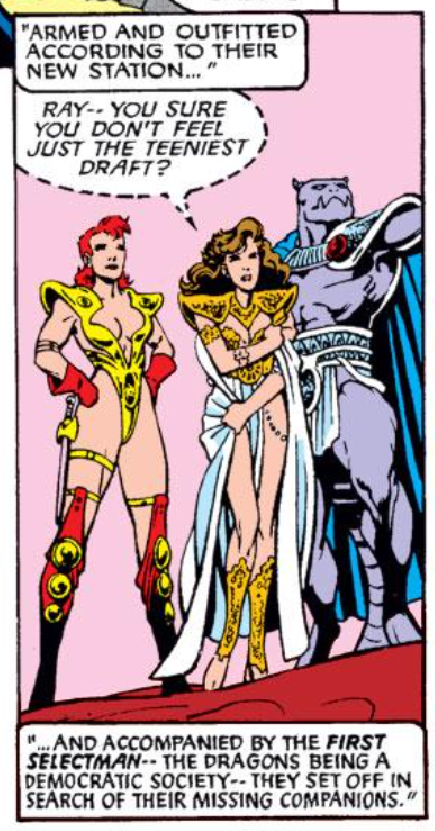 After the previous issue, which broke away from the usual "Cross Time" formula and teased an ending to this storyline, we're back to business as usual in this issue, as Excalibur once more finds themselves scattered in a strange world. And whereas previous "Cross Time" worlds had at least a theoretically intriguing hook ("Modern England but with magic!", "Superhero Dystopia!"), the world of this issue is seemingly just a generic pulpy sci-fi mashup, an excuse for Nightcrawler to do a bit of swashbuckling. It doesn't even follow on all that overtly from the end of the previous issue, which teased a sudden end for Excalibur on their latest world, and we're still stuck hanging out in this world heading into the next issue. The Davis art is nice, of course, and, if we want to be charitable, there's maybe an interesting kernel to the idea that mutant powers have a touch of magic to them (which is why their powers are being suppressed on this world by Anjulie's tentacled master), but this is pretty much just a return to boring, pointless form for this storyline at a time when it desperately needs to be going somewhere or saying something interesting.