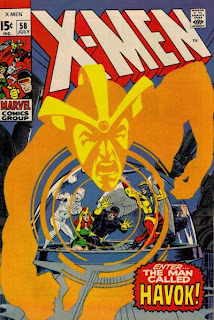 In a nutshell
The X-Men fight the Sentinels.

Plot
Beast and Iceman are attacked by a Sentinel at Cyclops' apartment. Beast retrieves Cyclops' portable television transmitter and Iceman sacrifices himself to allow Beast to escape. Beast alerts Cyclops, Marvel Girl and Angel to the return of the Sentinels. Angel flies ahead while Cyclops and Marvel Girl board a plane for New York. Iceman is taken to Larry Trask's Sentinel base in the Adirondack Mountains, where he is reunited with Alex and a captive Lorna. Trask has given Alex a suit which monitors his power, and Alex seems to be cooperating with Trask. He assures Iceman this is simply in order to keep Lorna safe, but when a Sentinel comes to take her away, Alex sees that Trask can't be trusted, and blasts it. Trask activates the control device in Alex's costume, causing him repel cosmic rays instead of absorb them. In Egypt, the Pharaoh feels himself turning into the Living Monolith, but a Sentinel arrives and captures him.

All over the globe, Sentinels are capturing mutants, including Mesmero and Banshee. Cyclops and Marvel Girl watch from aboard their flight as Angel is captured in midair by two Sentinels. Judge Chalmers arrives at Trask's base, expressing concern over Larry's handling of the situation. When Larry gives the Sentinels orders to kill all mutants, Chalmers realizes he's gone too far, and removes the medallion around Larry neck. Larry comes to his senses and cancels his termination order, but without the medallion, the Sentinels detect Larry as a mutant, one who must be destroyed along with all the others.

Firsts and Other Notables
Alex debuts as Havok, a name given to him by Trask and wearing a costume which monitors his energy levels and allows Trask to turn his power on and off. When using his power against a Sentinel, it is depicted for the first time in its signature style of concentric circles. Curiously, despite the fact that his codename and costume came from a mutant-hating villain, he'll continue to wear this costume for decades and uses the name to this day. 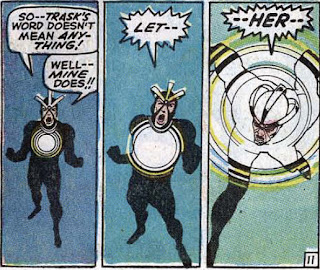 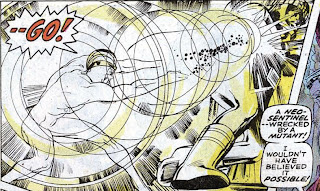 Alex and Lorna meet for the first time. Eventually, they will begin a romantic relationship that lasts for decades and will come to define their characters, so their first meeting in this issue is fairly significant.

Larry Trask is revealed to be a mutant; more on that next issue.

Trask's Sentinel base, built inside one of the Adirondack Mountains, appears for the first time. It will later serve as X-Force's first headquarters in the early issues of their series.

This is the issue which reveals that the Magneto working with Mesmero and claiming to be Lorna's father in issues #49-52 was a robot. Said robot is destroyed by the Sentinels in this issue. Larry claims the robot must have been created by Magneto to do his dirty work for him, and the plot point will go unaddressed until an entry in the Official Handbook of the Marvel Universe, as discussed here. 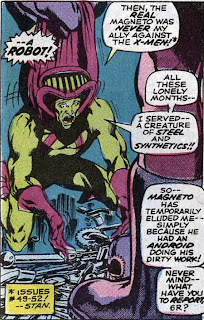 A Work in Progress
Throughout the issue, Larry is seen wearing a gold medallion around his neck, and there's a flashback to his father making him swear, as a little boy, to never take it off. Again, more on that next issue, but it's worth pointing out that said medallion wasn't seen last issue, suggesting Larry was wearing it under his shirt despite it being noticeable throughout this issue (or that Thomas hadn't thought of this plot point yet or that Adams failed to draw it). 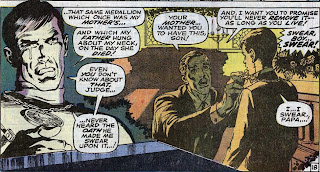 Ah, the Silver Age
Beast helpfully describes the action depicted in the art to us. 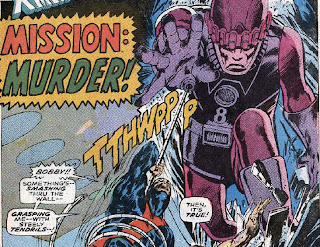 Larry seems to think it's a big deal that Chalmers is federal jurist. Quick, name one federal judge! Apparently being a judge trumps creating giant high-tech robots in Larry's estimation of the public's opinion. 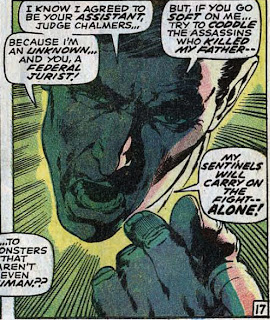 Human/Mutant Relations
Larry taunts a captured, powerless Iceman then releases him, filming Iceman's resultant attack in order to prove to the world that mutants are inherently evil and dangerous.

Some people begin to question the constitutionality and morality of the Sentinels abducting mutants, and Chalmers, to his credit, has reservations about Larry's handling of the situation, and finally steps in to stop him when Larry orders all the mutants killed.

Though he does believe that Boliver Trask, the man who created the mutant hunting Sentinels in the first place, "wouldn't have condemned anyone without hearing both sides."

The Awesome and Terrible Power of Cyclops
Just in case you've forgotten in all this talk of Alex's terrible power, this issue provides a helpful and random reminder of how awful Scott's power is too.

Neal Adams on the creation of Havok
"Roy told me that this Living Pharaoh character had kidnapped Cyclops' brother, and my first thought was 'why?' Originally, it was all about the Pharaoh wanting to use the X-Men as part of some devious plan, but that didn't exactly inspire me. It sounded like something you'd see on the old Adam West Batman TV show. Alex, the brother, kind of shows up out of nowhere, so I felt he needed to be a more interesting character...I figured we didn't hear about him before because he never wanted to use his power. He's hiding his power. Unlike his brother, who's willing to become Cyclops, Alex doesn't want to become anything, maybe because his power is too uncontrollable. It torments him. Its terrifying for him whenever he releases his power. Maybe Cyclops and his brother have a very similar power. Maybe they can both store energy and release it, but the brother can't control the way he releases his power. Why did the Pharaoh kidnap him? So that he can steal the brother's power for himself, and thereby force the brother to act, tragically."

Neal Adams on the design of Havok's costume
"That was a little different, because it's solid black and doesn't have any highlights. I thought, why not design a costume that represents a total absorption of energy? ... I don't know if a costume like that had ever been done in comics before." 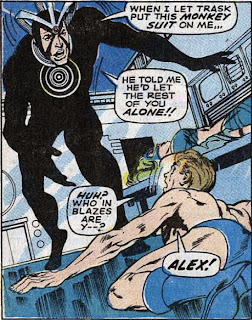 Neal Adams on the innovation of using an image on TV to convey exposition
"To me, the idea of including a television set in this sequence allowed me to have an extra narrative that didn't necessarily relate directly to the fight scene that I was also showing, but did relate indirectly to it. I could basically tell two stories at the same time. Iceman and Beast are fighting a Sentinel while Trask is appearing on television. So you have an event, and, as you're reading the dialogue, you realize that Trask is the cause of the event....if a technique is worthwhile, it deserves copying. Happens to me a lot." 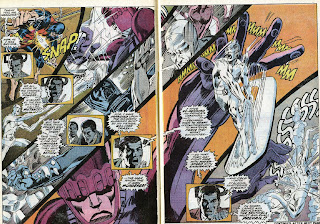 (click to embiggen)
Teebore's Take
Now here we go! X-Men fighting Sentinels, mutant getting rounded up and captured, robots rebelling against their masters; this is classic stuff, all beautifully illustrated by Neal Adams. We also get the debut of Alex as Havok, wearing one of the great comic book costumes (a costume so effective and iconic in its simplicity that it won't be replaced until the early 90s, when everyone was getting new costumes). Thomas is clearly intending to work in appearances by most all of the mutants to appear in the book thus far (with more to come next issue), which at the time was a far more manageable endeavor than it would be today, and isn't surprising given Thomas' affection for comic book history. The cameo help give the story a larger sense of gravitas, creating the feeling that it's not just the X-Men being threatened by the Sentinels, but truly all of mutantkind. Quite simply, top notch stuff.
Newer Post Older Post Home
Posted by Austin Gorton at 8:00 AM