The Walking Dead 5x09: What Happened and What’s Going On 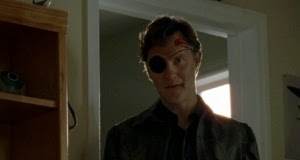 Did you know that living in the zombie apocalypse sucks? And that only the strong will survive? And those who try to be kind will always be taken advantage of and/or killed because of that kindness? Did you know that only ruthless, amoral people can survive the zombie apocalypse? Because if you didn't know these things then get ready to be educated because this episode desperately wants to teach you these lessons.

This episode, while artistically done, pretty much beat us over the head with a lesson that the entire series has already been trying to teach us. Charity, sympathy and empathy are weaknesses. Kindness is a character flaw. Morality has no place in a post-apocalyptic world.

We first start with Tyreese questioning how things went down at the hospital in the previous episode. He thinks that perhaps his peaceful plan is what got Beth killed. Of course everybody fails to mention that Rick's plan involved killing a bunch of people (who may or may not have been innocent) and that plan could've just as easily ended with Beth and/or Carol's death as well.

Noah also needed to learn lesson. That lesson was not to be optimistic...about anything. With the aid of Rick and company, Noah makes it back to his home only for it to be found desolate and overrun with zombies. The rest of the group already knew this was to be expected. All their hopes have long since shriveled up and died.

Glenn reminisced about how, while fighting Terminus, they stopped to let someone who was trapped in a train car out. The man turned out to be crazy and was killed shortly after being set free. Glenn says that today he would have left the man in the train car without a second thought. Not because the trapped man ended up to be crazy, of course, but because it was a selfless act. You can't be kind to people you don't know. They could be dangerous. Glenn realizes this now and seemingly doesn't want any part of being a good person anymore.

The only bright spot in the episode was everyone's favorite badass with a sword. Michonne seemed to recognize that everyone was turning to the dark side. Unfortunately she doesn't really rebut Glenn and Rick's assertions verbally but at least she recognizes something has to change. She convinces the group that heading towards any goal is better than wandering aimlessly. Rick agrees to go to Washington D.C. because, well, why the hell not?

That leaves us with good ole Tyreese. Tyreese can be a badass at times but is usually a cuddly teddy bear. He abhors unnecessary violence and really just wants everyone to get along. So naturally he must die. However, his big heart isn't what does him in. It's his stupidity that gets him killed. He gawked at a picture for no apparent reason except to let a zombified Noah's brother sneak up on him and bite him. I was...not impressed.

The second half of the episode deals with Tyreese's fever dream and his slow march to the great unknown. Tyreese hallucinates dead characters of the past and debates them. The villains try to convince Tyreese that it was his kind heart that got him killed. The protagonists (especially Bob) say that, in the end, things were going to happen the way they were going to happen. In other words, kindness and generosity at worst gets you killed and at best has no discernible effect on anything.

Rick and company try to save Tyreese. Tyreese tries to hold on to his life. Tyreese loses an arm. And in the end, Tyreese learns the most valuable lesson of all: Being dead is better than living in a zombie apocalypse.

Other Thoughts:
Even after the episode finished I missed the fact that the funeral at the beginning was Tyreese's. I figured it was Beth's and then when they came back they had another funeral (similar looking to Beth's) for Tyreese. My thought was they were showing how crappy their lives are now. They go somewhere, comeback and have funeral. They go somewhere else, comeback and have a funeral. Wash. Rinse. Repeat.

When we saw Mika and Lizzie say "It's better now" at the beginning of the episode I thought we were headed towards a more literal reference to heaven. There's nothing wrong with characters believing in heaven, but literally showing heaven can ruin narrative urgency.

Originally, when Noah talked of going home, I figured it'd take the series 3 or 4 episodes for him to get there.

Michonne slicing off zombie heads at the neck always bothers me. Decapitated heads can still bite!

When Ghost Martin started telling Tyreese that letting him live caused Bob's death I was about to call BS. Luckily, Ghost Bob called BS for me.

That being said, while I fall more on Tyreese's side of pacifism, I still think it was dumb to let Martin live.

There's nothing wrong with having an episode whose main plot is a glorified dream sequence where a character is struggling with their own ideas, morals and philosophies. An episode focused on character study can be interesting. However, when that dream sequence is happening to a character we all know is moments away from death then my interest wanes. Any revelation, realization or epiphany this character may have will, in the end, be pointless.
Newer Post Older Post Home
Posted by Dr. Bitz at 6:27 PM