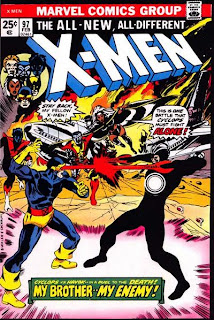 In a Nutshell
Erik the Red debuts, and the X-Men fight an enthralled Havok and Polaris.

Plot
Xavier dreams of an alien space battle, and in the morning, confides in Moira about the vividness of these recurring nightmares. Elsewhere, Lorna Dane is ambushed and hypnotized. When Havok returns home, she attacks him. Back in New York, the X-Men, along with Jean Grey, are at the airport seeing Professor X off on his vacation. As he boards a Starcore jet, he is attacked by Polaris and a similarly-entranced Havok. The X-Men spring into action, but Jean is knocked out by Polaris, at which point Erik the Red reveals himself, having attacked and brainwashed Havok and Polaris. 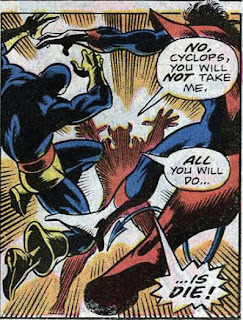 As Storm battles Polaris and Colossus and Nightcrawler tangle with Erik the Red, Cyclops clashes with Havok, trying to reason with his brother. When Banshee and Wolverine arrive to reinforce the X-Men, Erik the Red flees with Havok and Polaris in tow. Afraid to harm his brother, Cyclops refuses to blast them, angering Wolverine. Meanwhile, unknownst to them, the X-Men are being monitored by Stephen Lang, who is in turn himself being monitored by someone.

Firsts and Other Notables
Erik the Red, the villain, not the costumed identity of Cyclops, appears for the first time. We will shortly learn that he is an agent of the alien Shi'ar. Though Cyclops points out his having used the identity before, no explanation is given for the connection. 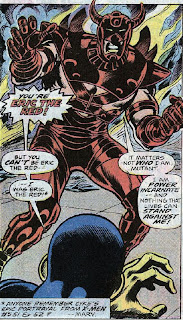 Havok (erroneously spelled "Havoc" throughout this issue) and Lorna Dane return, and Lorna is finally given a codename: Polaris. Though she receives this name from a villain, like Havok did, she will continue to use it throughout her super hero career. 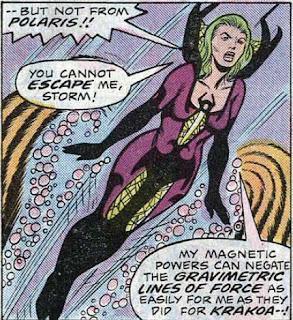 Jean Grey also pops up, seeing Professor X off at the airport along with the other X-Men.

Nightcrawler's image inducer, created by Tony Stark, appears for the first time. It casts a holographic image around the bearer, enabling Nightcrawler to appear in public without drawing attention. Here, he casts himself in the image of Errol Flynn. 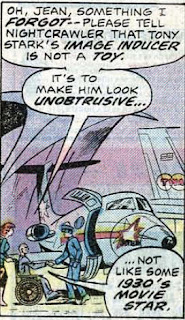 A Work in Progress
It is revealed that Professor X is being plagued by recurring dreams of an alien fleet doing battle, and that an alien figure is trying to contact him. This is the beginning of the upcoming Phoenix/Shi'ar story.

Professor X is shown to have bars above his bed to enable him to get into and out of his wheelchair. 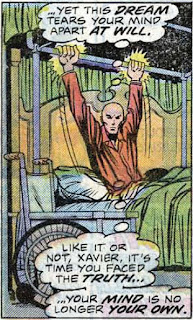 Banshee and Wolverine arrive to the airport via some kind of hovercraft.

The Wolverine/Cyclops rivalry starts here, as they violently disagree over Cyclops' failing to blast Erik the Red for fear of harming his brother. 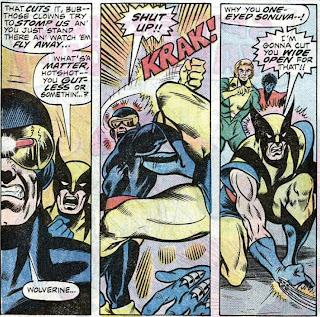 The mysterious figure observing Steven Lang remains unknown; some sources have listed him as a member of the Council of the Chosen of the Hellfire Club, though his sleeve looks like a Shi'ar uniform. 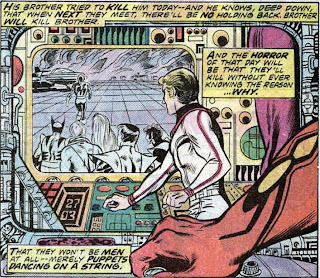 That 70s Comic
Dave Cockrum turns out another trippy and fun splash page, this time rendering the space battle about which Xavier is dreaming. 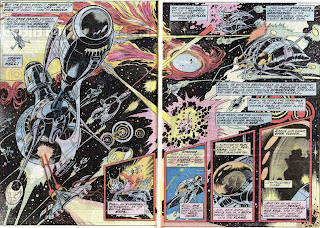 Storm changes from her street clothes into her uniform via lightening. Not exactly sure how that works. 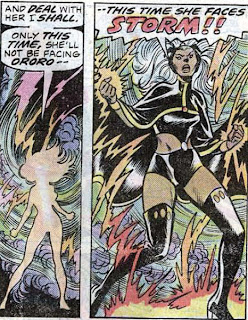 Young Love
Before Erik the Red shows up, Havok and Polaris are happily co-habitating in New Mexico and working on their doctorates. 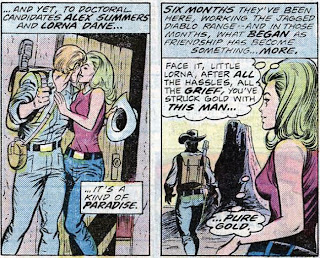 For Sale
Before GI Joe, there was Big Jim's P.A.C.K, apparently. 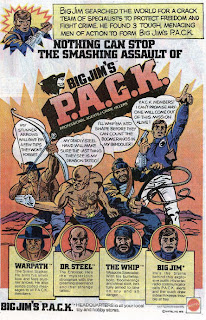 Well, at least the crooks didn't get any money. Way to go Spidey... 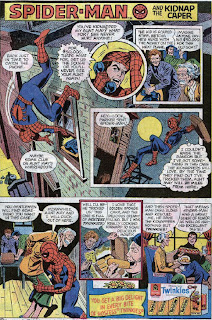 It's in the Mail
Reactions to Thunderbird's death have started to arrive. 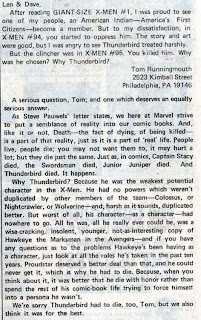 Teebore's Take
After dealing with the fallout from Len Wein's story last issue, Claremont is free to kick off his first original story free of any other constraints. Though what we're given here, in true Claremont fashion, are merely threads of a greater tapestry, it will become clear that Claremont is riffing on the Thomas/Adams run. In fact, according to John Byrne, that run was Claremont's only exposure to the X-Men prior to taking the assignment, and soon it will be obvious that he's a big fan, using a lot of his earliest stories to riff on their work and recapture the feel of it. To setup his story, Claremont plunders an even older bit of X-continuity from before the Thomas/Adams run (proving John Byrne at least partially wrong): Erik the Red, the costumed identity Cyclops used when infiltrating Magneto's organization back in issue #52. In that story, we had a hero pretending to be a villain. Here, that villainous identity is claimed by another and used to make villains of two heroes, Havok and Polaris. In doing so, Claremont shows that even from early on, he isn't afraid to comb the depths of the X-Men's past and use our expectations or familiarity with that past to enhance his story.

As with last issue, Claremont also spends as many pages developing subplots and characterizations as he does on super hero fight scenes. And when those fight scenes do occur, even they are rooted in characterization. By making his new villain use existing characters as his foils, the conflict is given more emotional weight than it would against a purely new villain. Here, Storm isn't just fighting a lackey, she's enraged that former teammate Polaris has endangered her friend Jean. Cyclops isn't just blasting the villain du jour, he's fighting his brother. By rooting the conflict in the characters, Claremont manages to tell a story with more resonance than the old Silver Age villain-of-the-month yarns.
Newer Post Older Post Home
Posted by Austin Gorton at 8:00 AM