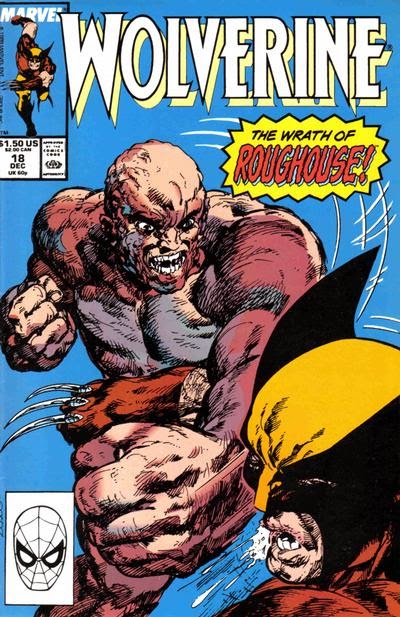 In a Nutshell
Wolverine battles Roughhouse aboard Geist's ship.

Plot
Wolverine battles Geist's soldiers, until Geist invites him into his cabin, offering to ease his fears. Inside, Wolverine finds a shaved, unconscious Roughhouse as Geist tells him that he currently serves a man named Caridad, the President of Tierra Verde. After watching the super-soldier Nuke, on loan from the US government, destroy a rival drug processing factory, Caridad tasked Geist with creating a national superhero for Tierra Verde, which Giest is attempting to do via the unique properties of Tierra Verde's cocaine. Outraged that he's using Roughhouse as a guinea pig, Wolverine attempts to free him, but Roughhouse wakes up and, confused, attacks Wolverine. During the fight, Geist hits Wolverine with several tranqulizer darts, slowing him down and giving Roughhouse the upper hand, before Geist knocks him out as well. 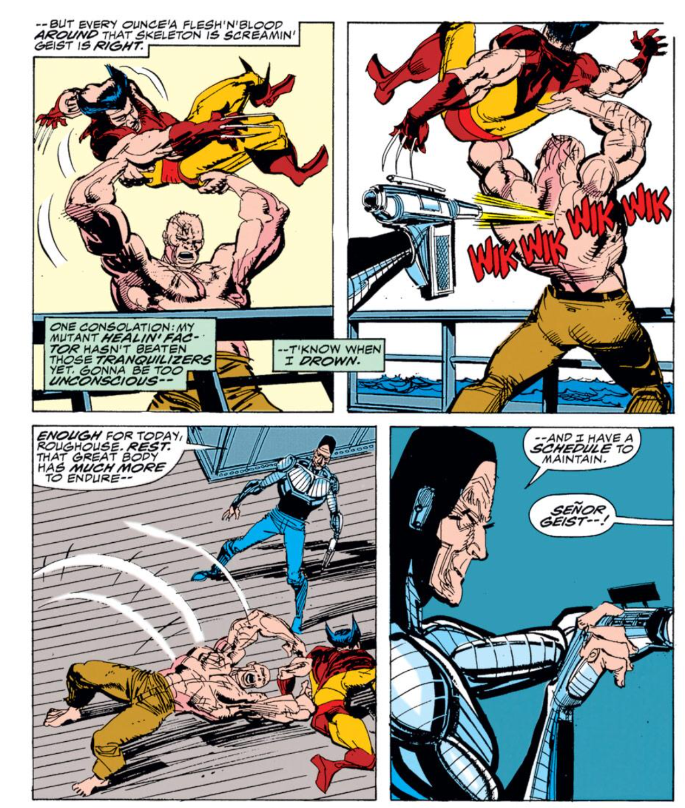 Just then, General Coy arrives on the boat via helicopter, buying a sample of the Tierra Verde cocaine with the money Giest gave him for Roughhouse. Shortly thereafter, Prince Baran arrives, and buys Wolverine for the price Geist paid to reclaim his impounded cocaine. As the Prince flies off, Giest watches as Wolverine is dropped from the prince's plane into the ocean, then prepares to head back to Tierra Verde, having acquired a test subject who can survive the testing process. In Tierra Verde, Caridad urges his ex-wife, now a nun, to stay with him aboard his yacht. When she refuses, he destroys the native village where she had been been working as a healer. Back near Madripoor, Tyger, Archie and O'Donnell work together to fish a badly injured Wolverine out of the ocean, who declares he's going to invade Tierra Verde.

Firsts and Other Notables
This issue introduces Geist's boss, Caridad, a puppet ruler/drug lord of a fictional Latin American country called Tierra Verde. I believe he's only ever appeared in this story. 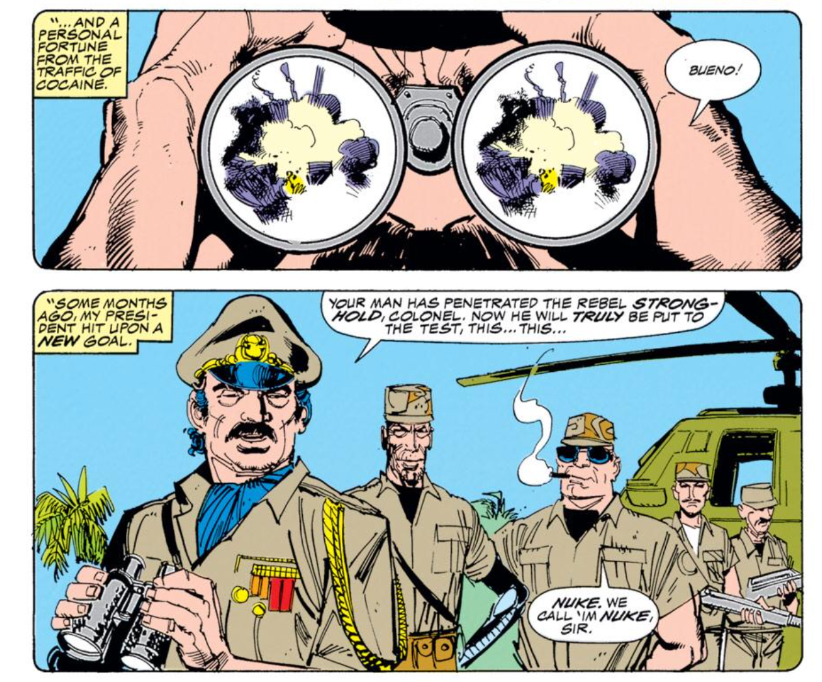 Caridad's former wife, now a nun called Sister Salvation, also appears for the first time. She seems to have some kind of healing ability. Continuing this story's random Daredevil connections, Geist reflects on the time the US government (who is helping prop up the anti-communist Caridad) sent Nuke, the deranged super-solider who debuted at the end of Frank Miller's seminal "Born Again" Daredevil story, to help Caridad destroy a rival cartel, inspiring his desire for his own national superhero. I haven't read much of it myself, but I believe Nuke becomes intertwined with Wolverine's backstory in the later Wolverine: Origins series. I believe this issue also marks the first appearance of Nuke since "Born Again", when he was believed to have died. 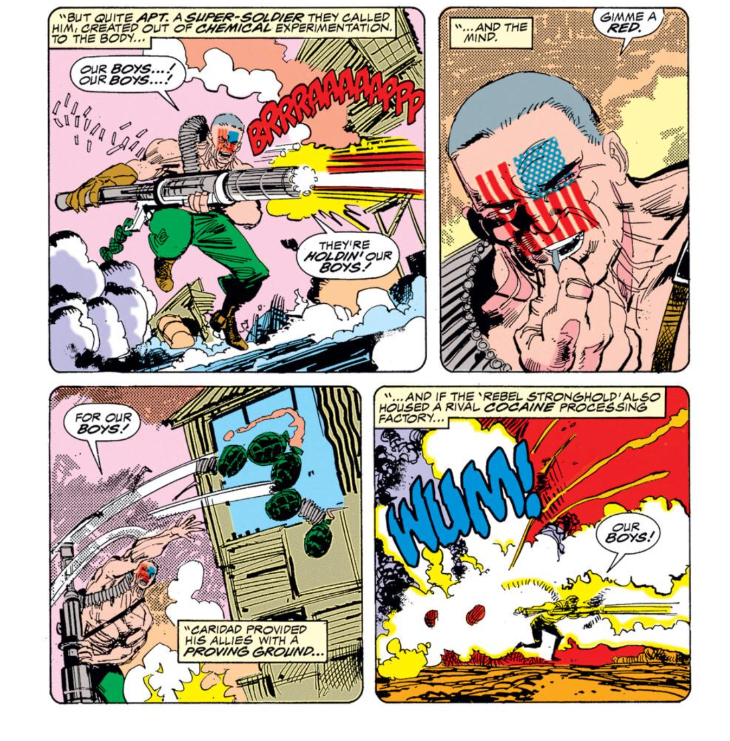 A Work in Progress
The Patch/Wolverine secret identity business gets a new spin this issue, as Wolverine attacks Geist's boat in his traditional Wolverine costume, leading Geist to believe not that Patch is Wolverine, but that Patch is pretending to be the dead X-Man Wolverine, for some reason, despite the fact he looks just like him and isn't even bothering to wear an eyepatch and also has claws. 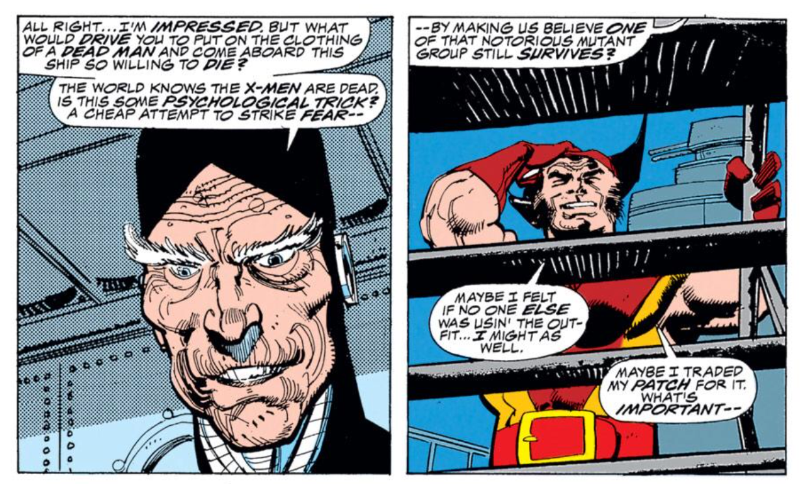 Geist mentions that his cybernetic enhancements only keep him alive, and don't provide any additional strength or other enhanced abilities. 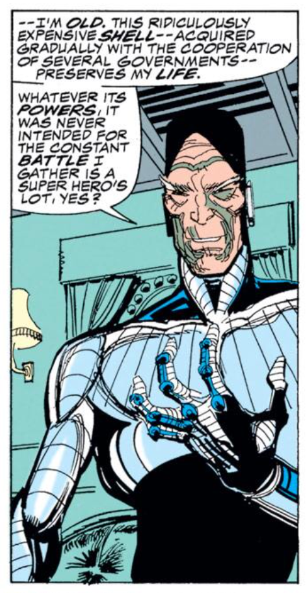 Teebore's Take
Goodwin and Byrne widen their story in this issue, introducing Geist's boss, Latin American dictator Caridad, and Geist's mission of creating a national superhero a la Captain America for Caridad's country of Tierra Verde via magic cocaine. In doing so, they keep the series' existing adventure serial vibe, but remove it from the previous 30s pulp tradition and plant it, with its drug lord dictator propped up for fighting communism in Central America, squarely in the realm of (then still contemporary) 80s action movies (I can almost hear James Horner's score from Commando in places). The creators also continue to play around with the idea of Wolverine's identity (in a somewhat ludicrous fashion) and make good use of the title's support cast, continuing the strong effort begun last issue.