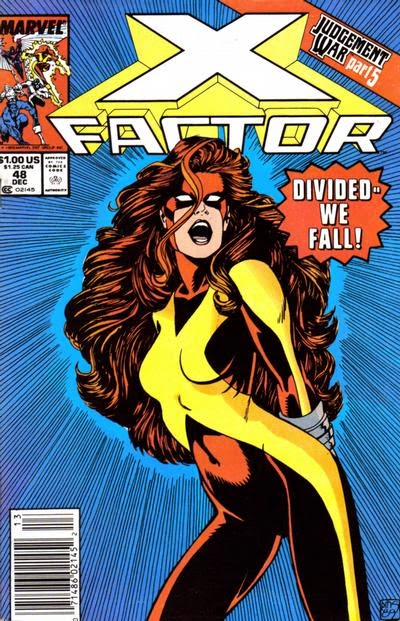 In a Nutshell
More Celestials arrive as prisoners are exchanged.

Plot
In the common ground between their cities, representatives of the Chosen and the Rejects exchange prisoners, with the Rejects successfully bargaining Marvel Girl for Agrom and ten other gladiators. Meanwhile, inside the Chosen City, Seera is told to prepare for her alliance with Rask, but she resists, telepathically attacking the guards and rushing off. Outside the city, Cyclops and the Beginagains plot their route inside as another Celestial lands on the planet. Inside, Seera frees a drugged Archangel just as Rask arrives. Archangel tries to flee with the woman, but is shot down and recaptured. Rask then strong arms Palik into tying Seera's fate to Archangel: should he fall in his battle with Iceman, so to will Seera die. 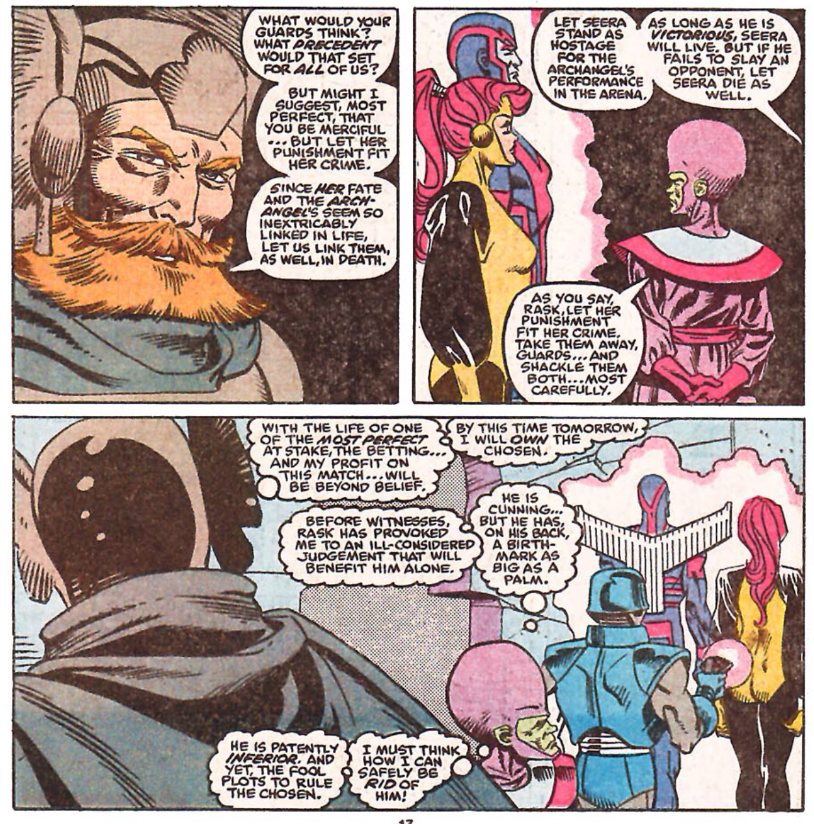 Meanwhile, the Rejects celebrate the return of Agrom, and Beast uses the distraction to escape from his cell. Agrom spots him and the two fight, but when Agrom learns Beast is Archangel's friend, he embraces him. In the Chosen city, a group of scientists attempt to learn Christopher's origins as a third Celestial lands, observed by Iceman and Lev. In the Reject city, Agrom corroborates Beast's story of how he ended up on the planet. Beast wonders if Zarkah's people will still follow him into the Chosen city; she suggests they'll do as Agrom says. In orbit around the planet, Ship, having learned the truth of his origin, debates his next action as more and more Celestials arrive on the planet, knowing their impending judgment means the end of the world and his friends with it.

Firsts and Other Notables
Ship is declared to be a "data sampling unit" created by the Celestials, a declaration quietly made in this issue after various hint in that direction in previous issues. Presumably, then, Apocalypse somehow took control of the technology and claimed it for himself.

Baby Christopher is able to tell when Madelyne takes control of Jean's body, activating his telekinetic force field as a result. 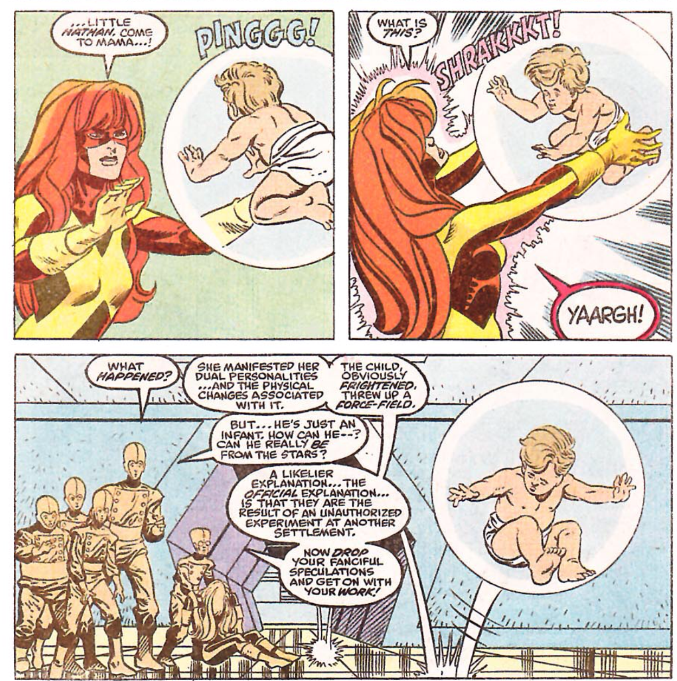 A Work in Progress
Two more Celestials land on the planet, just outside the Chosen city this issue, while a whole mess more are seen heading towards the planet from space. 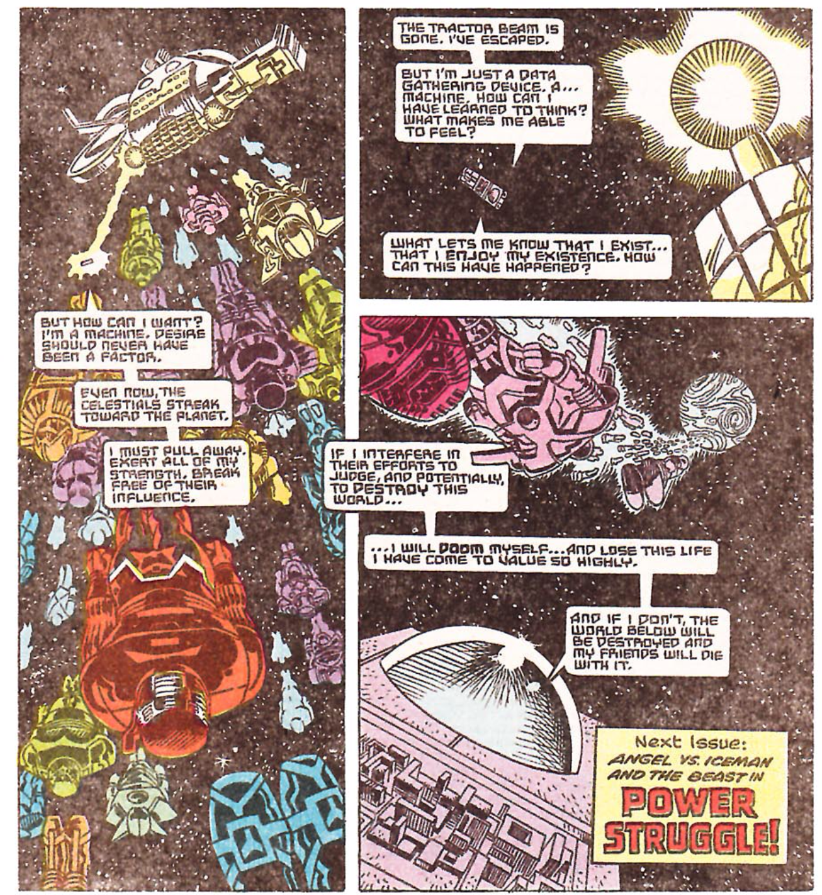 Beast once again worries if the fate of this world, in which widespread mutations have made breeding nearly impossible, will be the fate of Earth if mutants continue to increase. 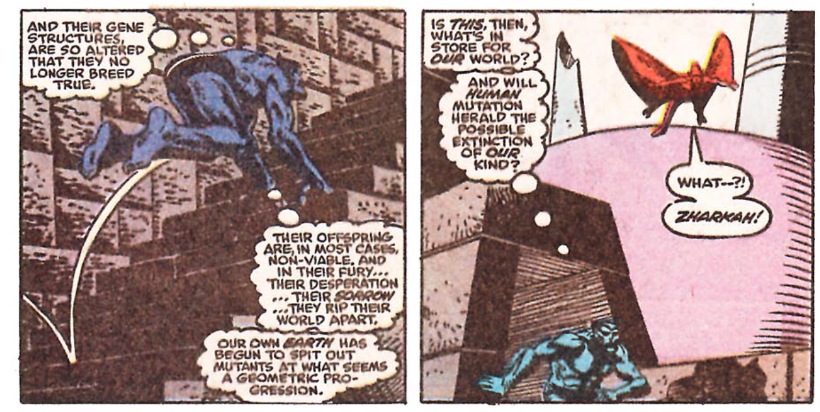 Other Chosen settlements are mentioned, suggesting there are more cities/communities on this world beyond the two main cities where most of the action takes place.

Teebore's Take
Though not entirely its own fault, coming as it does on the heels of the completely disconnected fill-in story in the previous issue, this reads like the most wheel-spinningest chapter yet. Issue #46 began the business of moving the characters into place for the finale, having the scattered members of X-Factor all converge on the Chosen City as Seera's crimes were discovered. Then issue #47 did nothing, and now this issue...moves everyone closer to being reunited a slight bit more. There's some nice moments here and there - Beast having his story verified by Agrom, the mounting threat of the Celestials - but for the most part, this is just a lot of recap and incremental plot movement, at a time when the already long-in-the-tooth story should be ramping things up for the conclusion.

Next Issue
Next week, "Acts of Vengeance" part one, Excalibur #16, and Wolverine #18.