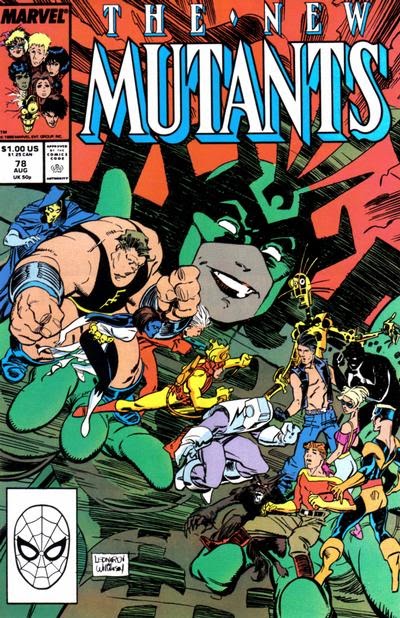 In a Nutshell
The New Mutants battle Freedom Force en route to being sent to Asgard.

Plot
The New Mutants, still watched over by Dr. Strange, work together to gather up Dani and the massive ice machine keeping her fiery rampage in check, determined to get her back to Ship before the machinery fails. Watching from Hel, Hela plots to use the Valkyrie against Odin and get revenge on Thor, and moves to keep the pressure on the New Mutants. Back on Earth, Freedom Force arrives in Manhattan, called in by reports of Dani's attack and believing Rusty is responsible. They attack the New Mutants en route to Ship, with Destiny insisting Rusty must be apprehended to ensure Freedom Force's survival, and both teams land on Liberty Island. 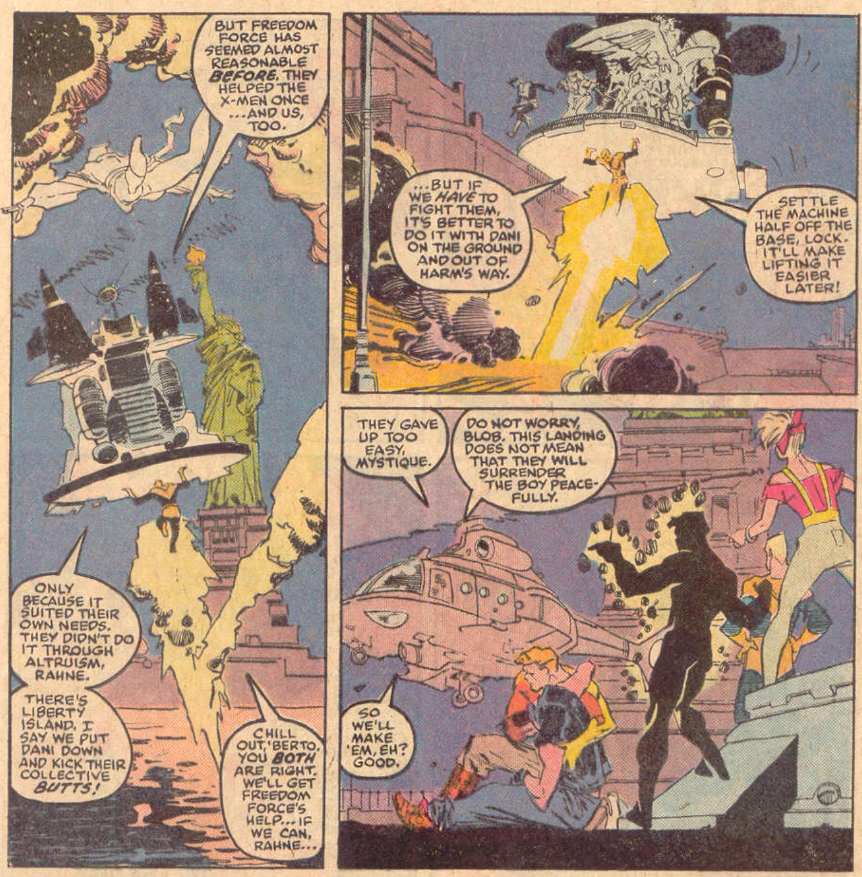 When Blob taunts Rusty and Skids with the fact that the government has plans for the babies X-Factor turned over to them, Skids tells the rest of the New Mutants to get Dani back to Ship and to tell X-Factor what they heard, while she and Rusty stay behind, protected by Skids' force field. The rest of the New Mutants break off, pursued by Crimson Commando and Avalanche. Now over the ocean, Avalanche triggers a tidal wave that frees Dani just as Ship inexplicably flies into space. Still watching, Dr. Strange realizes Dani is too dangerous to remain on Earth, and that the Fates have called on the New Mutants to spoil Hela's plan, just as they've called on him to deliver them to Asgard. In a flash of light, the New Mutants disappear and suddenly find themselves in Asgard. As the still-possessed Dani flies off, her friends wonder what they're supposed to do now.

Firsts and Other Notables
The New Mutants are sent to Asgard at the very end of this issue, thus kicking off New Mutants' 1989 long-running, multi part storyline. Settle in guys; they're gonna be there for awhile.

Two New Mutants who don't make the trip to Asgard are Rusty and Skids, who remain behind to deal with Freedom Force. They'll formally remain a part of the team and be featured in the book for awhile yet, but this issue marks the final time they'll appear alongside the rest of the New Mutants.

Freedom Force appears in this issue, called in by Hela and believing the fires triggered by Dani last issue to have been caused by Rusty, in violation of the furlough he received in X-Factor #40. However, Spiral and Stonewall don't appear in this issue. And Super Sabre is referred to as Silver Sabre. 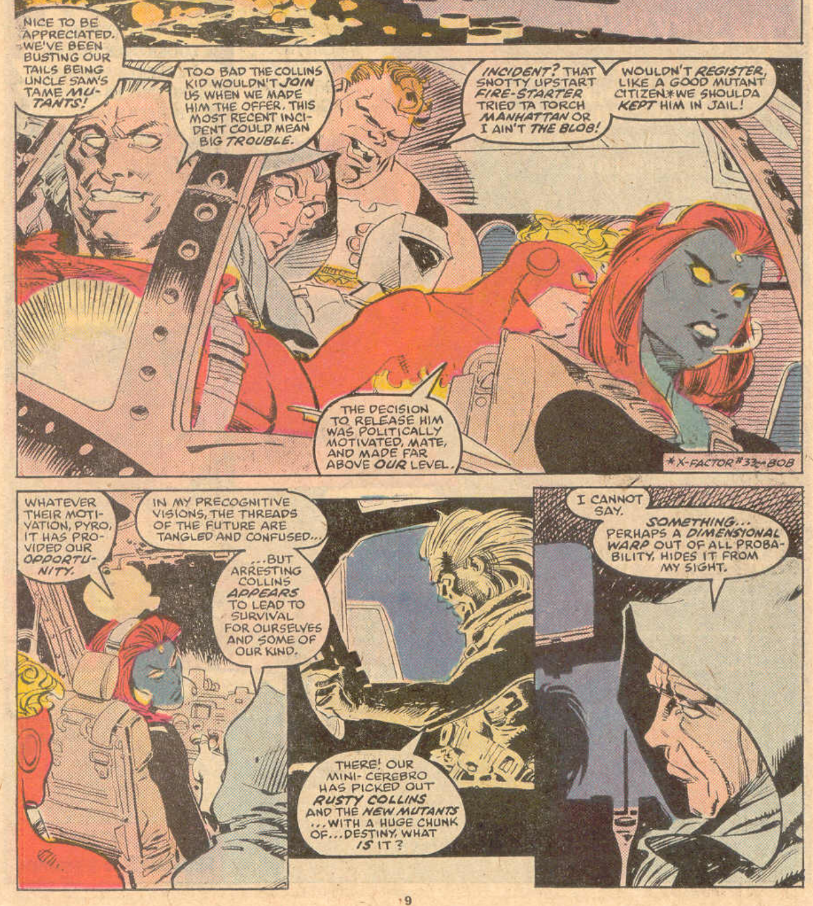 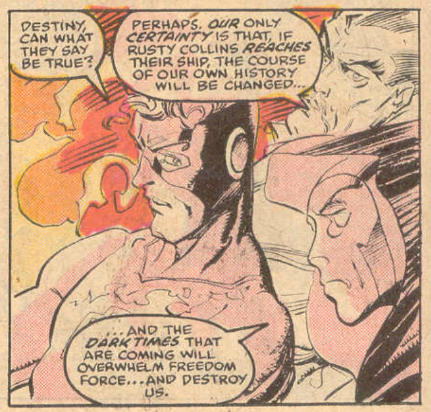 It's revealed that the government has plans for the Inferno babies, whom Freedom Force took custody of in X-Factor #40, that presumably don't involve returning them to their parents as promised, something which Blob blurts out to the New Mutants (which will cause problems for Rusty and Skids in forthcoming issues). This is another plot thread that never really gets resolved, though we eventually learn, much later, that the Inferno babies end up being used by the army and stranded in Limbo (here, Blob seems to hint at the idea of the government raising and training the babies as well as other super-powered children). 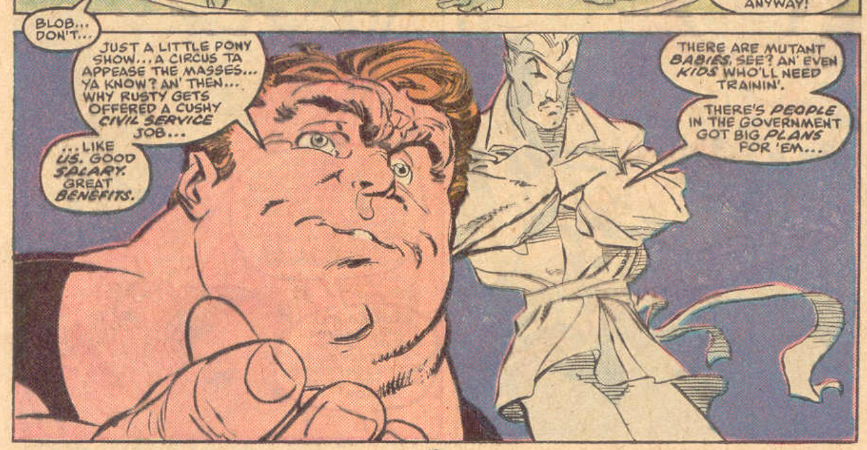 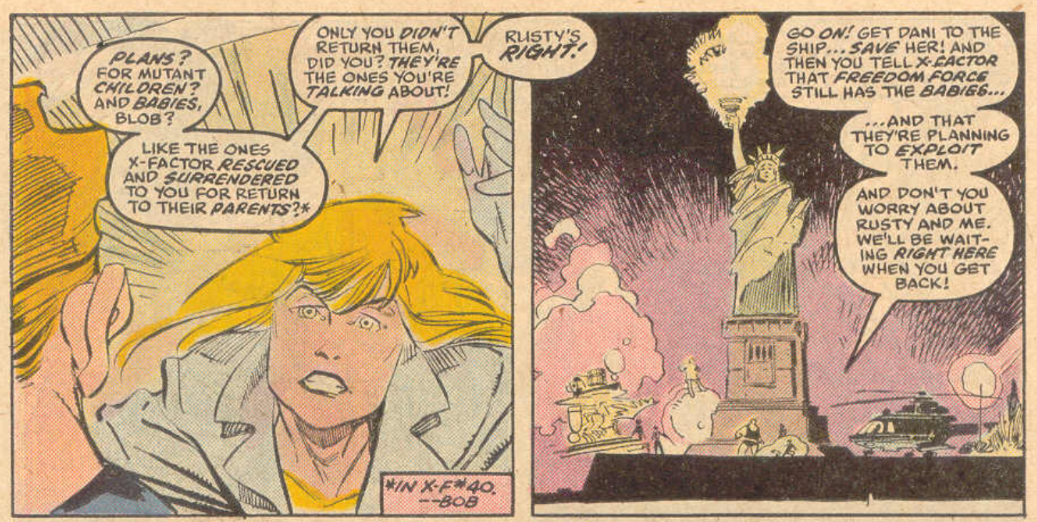 The New Mutants reach Ship only to find it ignoring them as it flies higher and higher into the air; X-Factor #43 shows this scene from X-Factor's perspective, and explains what's happening to Ship.

Dr. Strange carries over his guest appearance from last issue, watching the New Mutants battle Freedom Force via his Astral Form, saying he'd like to intervene but he dare not assist them, as too much of their fate remains in question. Eventually, he realizes he must send the New Mutants to Asgard. Rick Leonardi, still getting work in the X-Office at this point, fills in on pencils.

A Work in Progress
Rusty mentions that he's impervious to his own heat, something that's been visually implied before but which I don't think has ever been formally established previously. 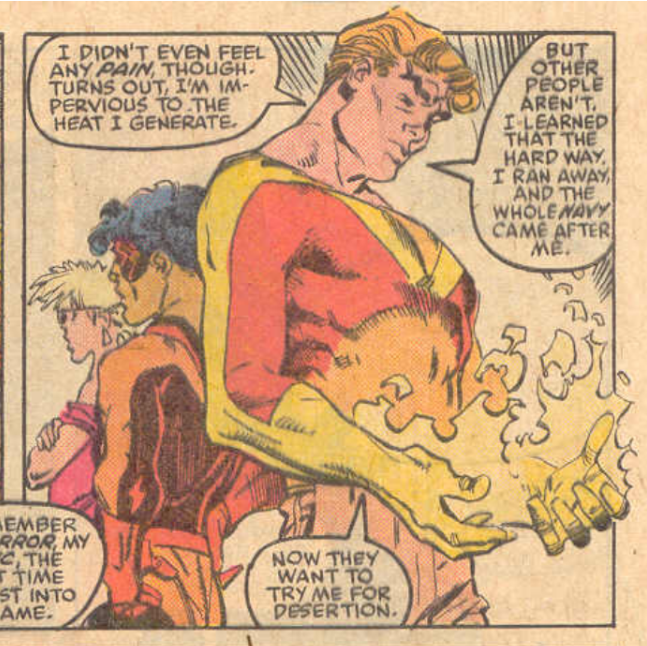 Hela reveals that the rest of the Valkyries have all succumbed to the illness Dani is fighting, preventing them from swelling Odin's armies. It's also noted that Asgard is now in the Negative Zone, the alternate dimension home of Annihilus and Blastaar, as of Thor #404. 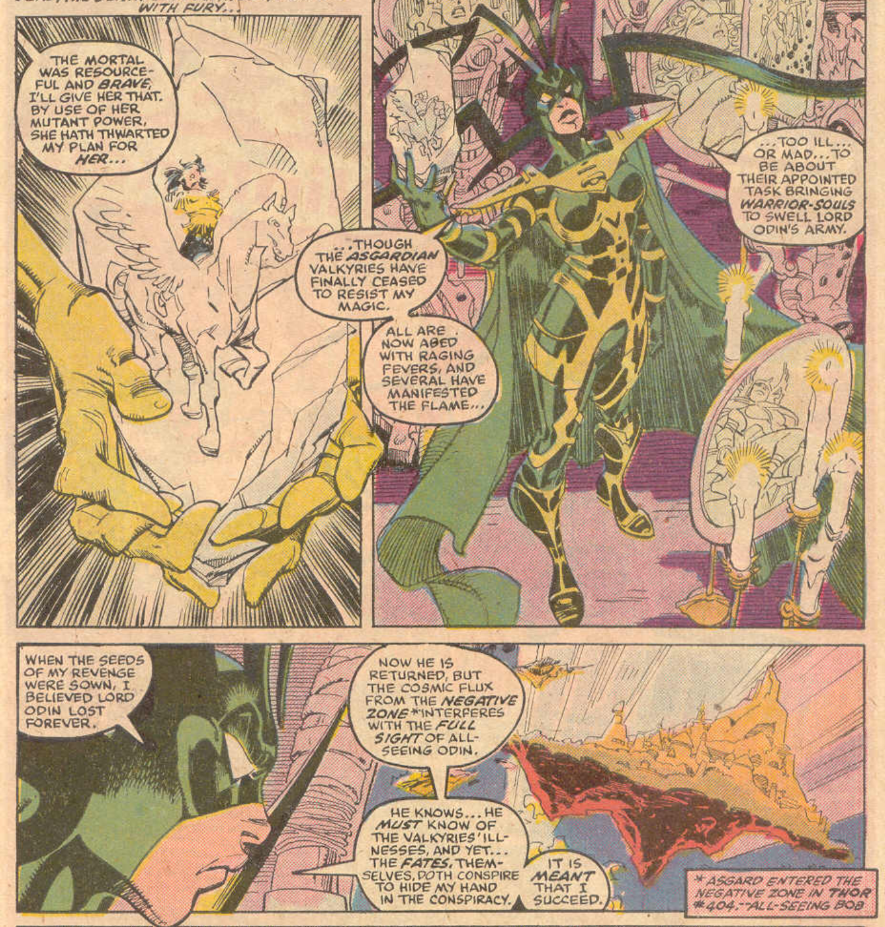 I Love the 80s
Crimson Commando attempts to stun Rictor with a gentle blow...by firing a bullet at his temple.

It's in the Mail
One of the letters in this issue more or less hits right on the loophole that would allow a teenaged-Illyana to return. 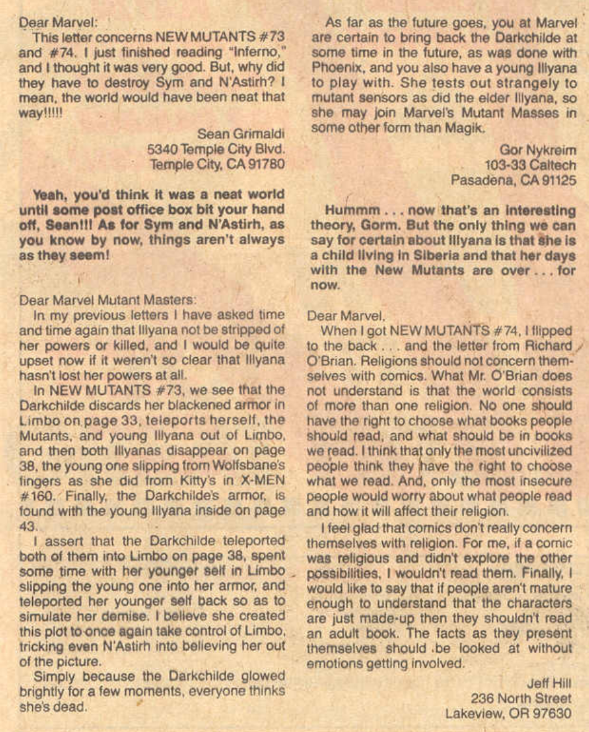 Teebore's Take
We're on the cusp now of the interminably-long second Asgard story, with the bulk of the team arriving there in the closing panels of this issue. But before that, we get a relatively straightforward fight with Freedom Force that takes up the bulk of this issue, and for the most part, it's rather entertaining. Freedom Force has consistently made for good done-in-one/secondary antagonists, as time doesn't need to be spent establishing their motivations, they have a wide range of powers at their disposal, and the contrast between them being selfish jerks and government agents easily introduces tension into every confrontation with them. Plus, at this point they have a history with the team, which always helps as well.

So Simonson and Leonardi make the most of the confrontation, seamlessly giving each character a chance to contribute to the confrontation and show off their powers while consistently ratcheting up the tension throughout the issue. A lot of what gets setup here (Destiny's premonition regarding Rusty, the split of Rusty and Skids from the rest of the team, the government's plans for the Inferno babies) ultimately fizzles out (or gets resolved much later), and Dr. Strange hanging around like a goober doing nothing until the very end makes it clear his only purpose in this story is to be the means of getting the New Mutants to Asgard, but for the most part, this reads like a brief glimpse of what this series might have looked like, post-"Inferno", had the characters not stayed in Asgard as long as they do or had Rob Liefeld not risen to prominence on the book so far, so fast.

Next Issue
Tomorrow, find out where Ship is going in X-Factor #43. Next week, Blob and Pyro drop in on Daredevil in Daredevil #269, followed by Excalibur #11.
Newer Post Older Post Home
Posted by Austin Gorton at 12:00 PM