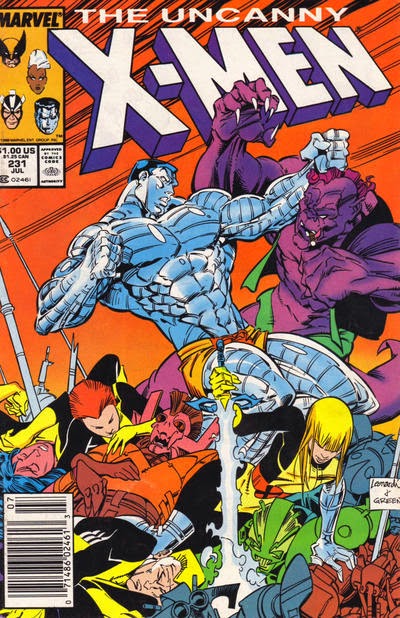 In a Nutshell
Colossus reunites with Illyana and battles Baba Yaga.

Plot
In Australia, Colossus, troubled by recent dreams of his sister and his difficulty transforming to flesh, has a heart-to-heart with Storm. That evening, as the X-Men do the dishes, Dazzler suggests letting Colossus contact Illyana. Just then, Gateway appears and beckons Colossus. Following, Gateway opens a portal and Colossus emerges in Limbo, just as Illyana is about to cast a necromancy spell to return him to life. Colossus smashes the demon S'ym, then Illyana, believing him to be the shade of her brother, tells him of how the New Mutants have been captured by a demon posing as Baba Yaga. Unable to teleport them through the demon's protective wards, she turned to Colossus, hoping his iron body would make him less vulnerable than Illyana. She then teleports him to Baba Yaga's location in Limbo, a demonic version of the X-Mansion. 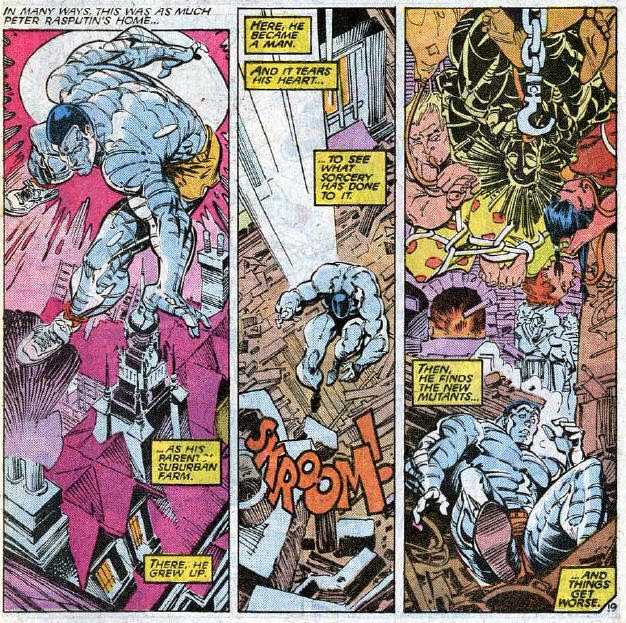 Colossus finds the captive New Mutants in the kitchen, but is unable to squeeze through the door, his metal form too large. As Baba Yaga prepares to eat her captives, Colossus manages to revert to flesh and enters the room. Transforming back into steel, he easily overpowers the demon due to her weakness to iron. In the aftermath, Illyana bemoans her growing dark side but Colossus points out that her desire to be good is what matters, and that even if she fails, she still keeps trying. Illyana says goodbye as Gateway opens a portal to teleport Colossus home. As Illyana returns home with the New Mutants, the techno-organic S'ym reforms, confidant that though Illyana and Colossus won this battle, his power is growing, and he will ultimately win the war.

Firsts and Other Notables
This issue finds Colossus helping Illyana battle Baba Yaga, a witch from Russian mythology who has captured the New Mutants. In a clever bit, Colossus is teleported to Illyana in Limbo by Gateway just as Illyana is about to cast a necromancy spell to return his spirit from the dead, leading her to spend the issue believing Colossus is just a magical representation of her brother and not the real thing. It's built on a giant coincidence, but the coincidence is helped along by the wonky time of Limbo and the involvement of Gateway. As a result, Illyana continues to believe the X-Men are dead, and believing she got away with the casting the necromancy spell and not turning entirely evil as a result, resolves not to try it again. 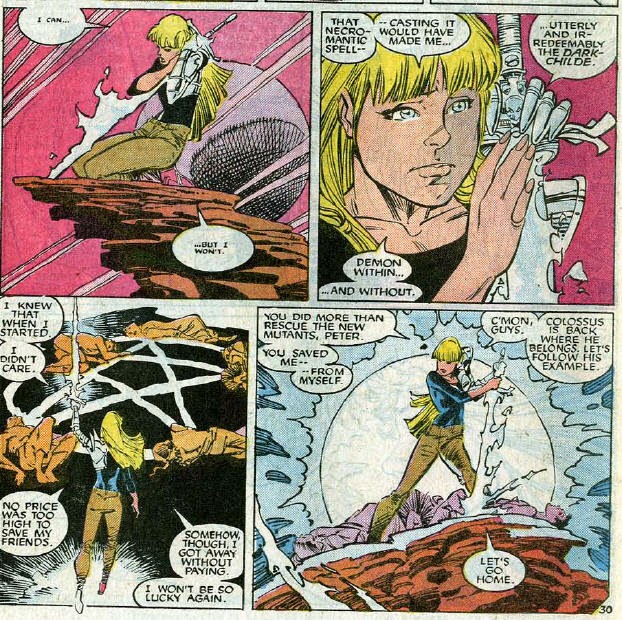 The Baba Yaga whom Colossus and Illyana battle isn't the "real" Baba Yaga, but rather a demon from Limbo who escaped to Earth and pulled that form from Illyana's mind. The demon was able to escape because the walls between Limbo and Earth are strained, a further setup for "Inferno".

Illyana's struggle with S'ym for control of Limbo is also referred to as a full scale civil war at this point, and though Illyana believes she's destroyed S'ym this issue, he returns by issue's end. 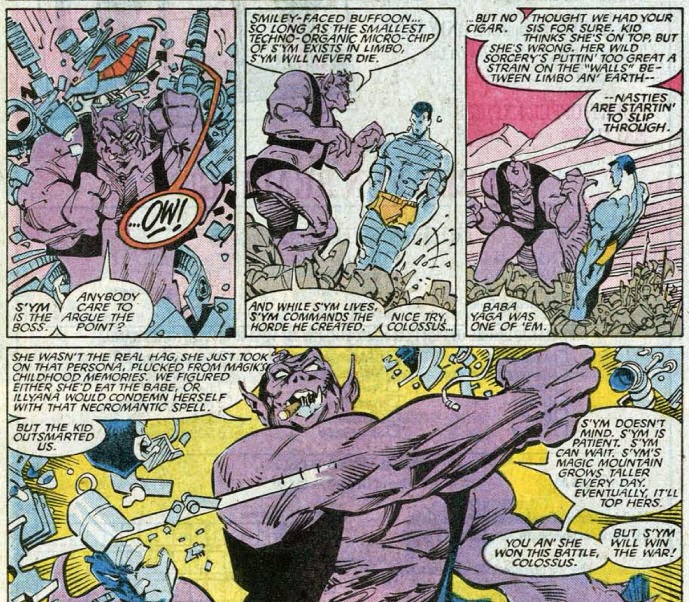 Rick Leonardi fills in on pencils, and after his fill-in on #228, we can now essentially consider him the book's co-penciler, as he will more often than not be the go-to artist whenever Silvestri needs a break.

The Chronology Corner
The events of this issue take place after New Mutants #66, per an editorial footnote.

A Work in Progress
Gateway appears in this issue wearing more clothes than his usual loin cloth.
One of the Smiley Face Right soldiers sent to Limbo by Illyana tries to take control in the wake of S'ym's apparent destruction.

Colossus is forced to transform into flesh in the course of this story, only the second time he's done so since his return to the book (and, not coincidentally, both times he did it in order to help his friends and family, literally shedding his tough exterior to help his loved ones). 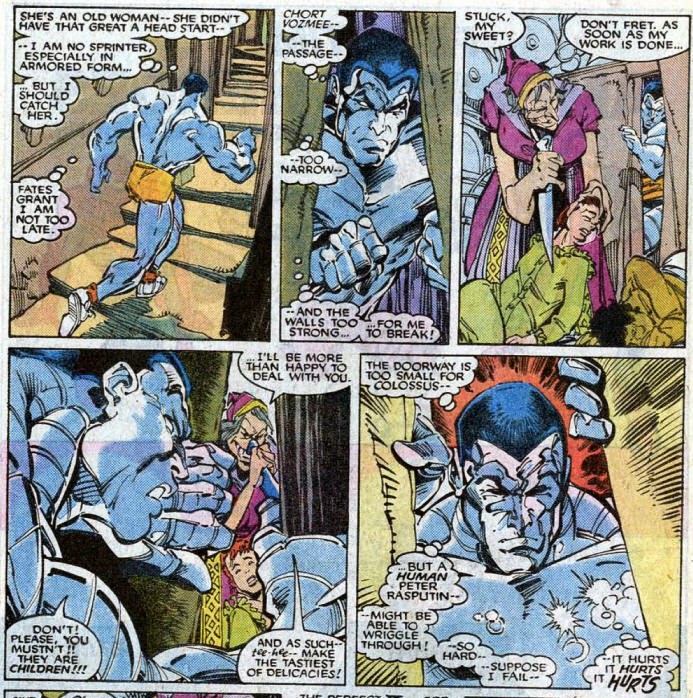 As with the Adversary, Colossus is able to defeat Baba Yaga due to magic's vulnerability to iron. 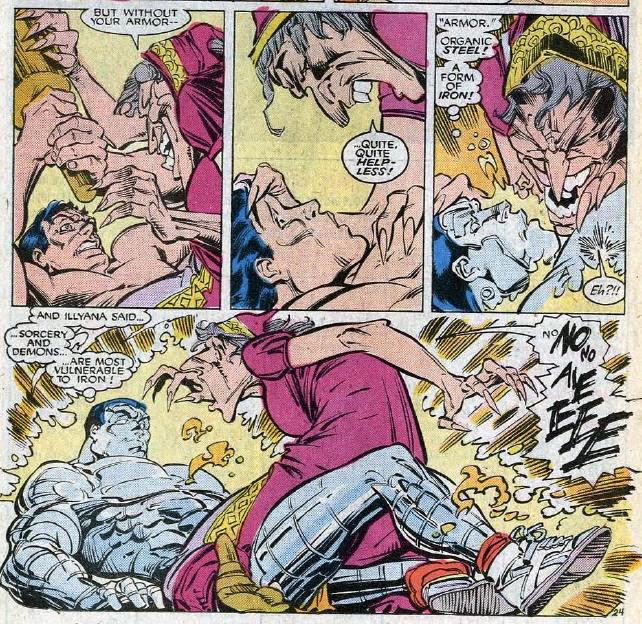 Claremontisms
In a neat little detail, Colossus, stuck in his metal form, has become so hot standing out in the Australian sun that his sketch book bursts into flames when he touches it.

For Sale
There's a house ad in this issue for "The Evolutionary War", the upcoming storyline which unfold in all of Marvel's 1988 annuals. 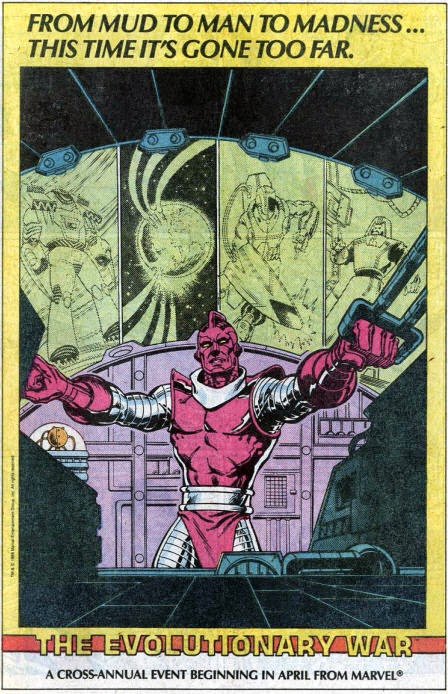 Teebore's Take
Amongst the "All New X-Men", Colossus is unique. Whereas for most of his teammates, the X-Men became a defacto family where they had none prior, Colossus comes from a loving home, with parents and siblings. This doesn't make the X-Men any less his family as well, but he has occassionally struggled with homesickness, of the contrast between his new family and old. As a result, he's taking the X-Men's recent exile into legend a bit harder than the others, concerned as he is with his sister's well-being in the wake of his perceived death. This issue, then, is meant to address his concerns while helping Illyana come to terms with the death of her brother.

In theory and execution, this isn't a bad story. It's arguably a necessary one (especially in terms of allowing New Mutants to move forward), and Claremont finds an effective of way having Colossus help Illyana and still preserve the X-Men's ruse, while Leonardi continues his strong work as the book's effective co-penciler. Where it suffers is in the timing. The X-Men came out of "Fall of the Mutants" determined to use their new status quo to strike out with impunity against their enemies. After relative detours in issue #228 and #230, we have another issue where the X-Men don't do that. So while this issue isn't an out-and-out fill-in on the level of #228, and in fact covers a necessary story beat, it's still hard to not wonder when exactly the X-Men are going to get to the fireworks factory already, so to speak.

Next Issue
Tomorrow, the New Mutants battle Freedom Force in New Mutants #65, followed by X-Factor #30, in which Infectia sets her sights on Iceman. Next week, the "Evolutionary War" begins in X-Factor Annual #3.
Newer Post Older Post Home
Posted by Austin Gorton at 12:00 PM