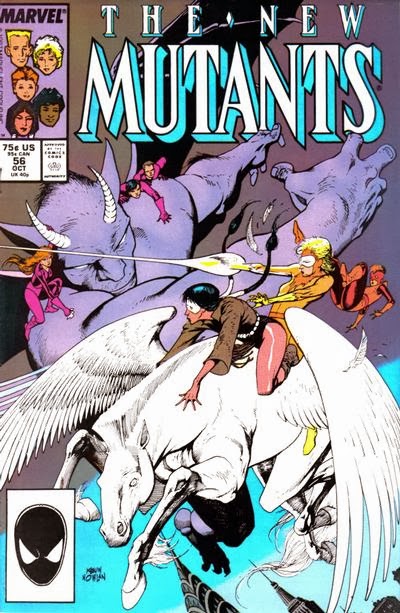 In a Nutshell
The New Mutants compete with the Hellions for Bird-Boy.

Plot
At breakfast, the New Mutants discuss Lila's party from the night before, and Dani teasingly manifests an image of a guy Amara thinks is cute, which turns out to be the Hellion Empath. Running to her room, Amara reads a letter from her father, urging her to come home. She is reluctant to do so, though muses that she felt more at home at the aristocratic Massachusetts Academy than Xavier's school. At the Hellfire Club, the Hellions are watching the news, and see footage of Cannonball accidentally breaking the bird boy free the previous night. Suspecting the New Mutants have some interest in the creature, the Hellions vow to get to him first. As they leave, the White Queen pulls Empath aside, telling him it's time to spring her trap. At Xavier's School, the New Mutants see the same footage and decide to save Bird Boy. They teleport into the city and spot Bird Boy over the river. Attempting to communicate with the creature, they are interrupted by the Hellions, who scare him off. 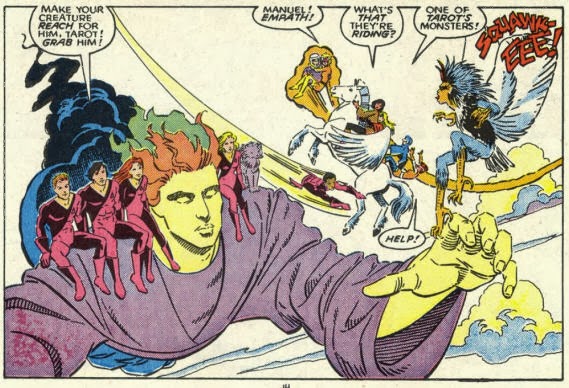 The New Mutants and Hellions chase Bird Boy through the city as Illyana, Doug and Rahne gather a load of fish to use as a lure. As the Hellions and New Mutants come to blows, Empath, remembering the White Queen's orders, uses his power to turn the fight to the New Mutants favor, leading Amara to think she may have misjudged him. Thunderbird believes the match to be a draw, as Bird Boy has disappeared, but just then Illyana and the rest of the New Mutants arrive with the fish, followed shortly thereafter by Sam, racing after Bird Boy. Sam tackles the creature and they land on the fish, at which point Illyana teleports everyone away, claiming victory. Back at the mansion, the New Mutants set the Danger Room to a desert island environment, which seems to calm Bird Boy, just as Amara announces she's going to transfer to the Massachusetts Academy.

Firsts and Other Notables
Bird-Brain (here just Bird Boy; he'll get the nickname/codename next issue) makes his first full appearance, after his brief cameo last issue. It remains unclear what exactly he is, though Dani notes he's at least part animal, as she can sense him psychically. 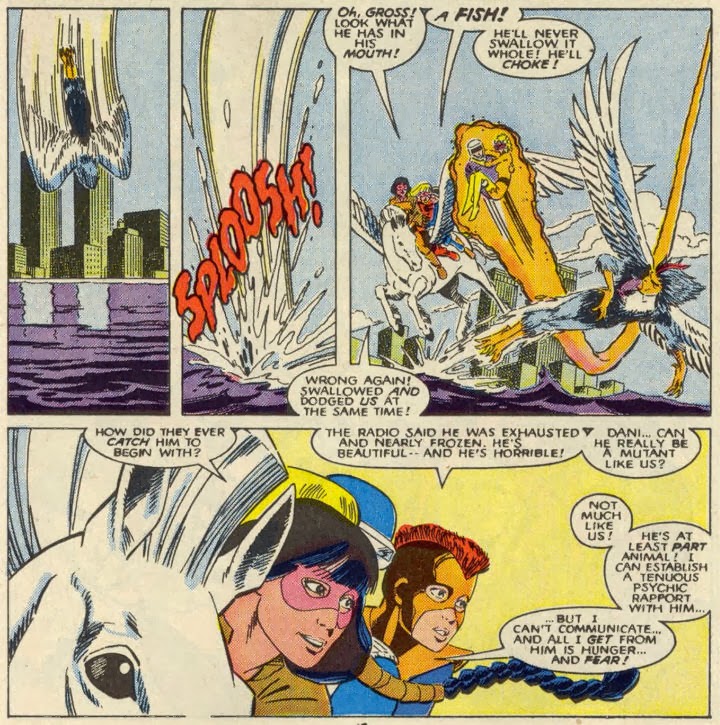 The Hellions return, in a reprise of their "duel" with the New Mutants in issue #54, as both teams compete to be the first to take in Bird-Boy. Unfortunately, this is the last time the Hellions appear as a rival to the New Mutants - they'll pop up again for an Amara-centric fill-in story, then once more in New Warriors before being mostly (and unceremoniously) killed off in Uncanny X-Men #281.

Amara's departure from the series begins with this issue (she formally leaves next issue). It's revealed that she's received a letter from her father urging her to come home and settle down, and while she finds herself lonely at Xavier's School, she doesn't want to return home either, and instead decides to transfer to the Massachusetts Academy. I've never read anything suggesting why Simonson decided to write her out of the book, but I assume it's either of a desire to de-power the team somewhat or simply a lack of interest in that particular character.

Amara also expresses an attraction to Empath, marking the beginning of a small storyarc in which the pair become romantically linked and Simonson attempts to somewhat redeem Empath (or at least give him some added dimension), a somewhat dubious endeavor given his past actions. 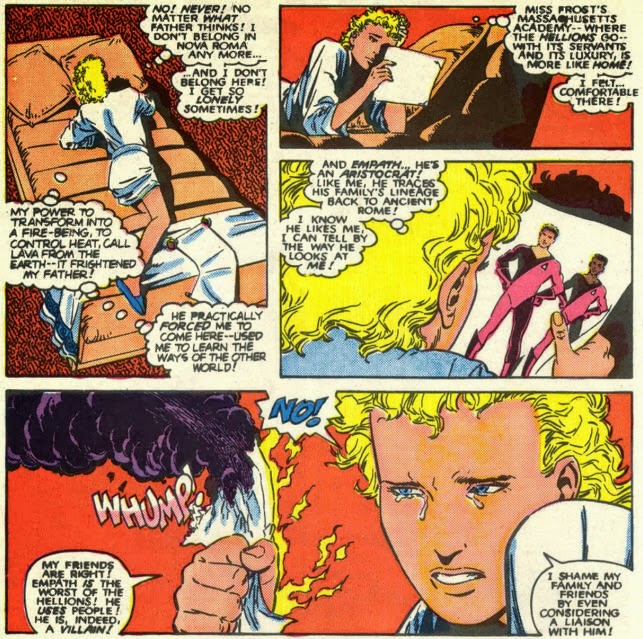 It's established that Empath can sense others emotions in people as well as make them feel whatever he wants, and that the White Queen, during the New Mutants' time at the Massachusetts Academy (circa issue #40) and the recent party at the Hellfire Club, as been subtly manipulating Amara into joining her school. This will eventually tie in with a subplot Simonson develops involving the Hellfire Club having mysterious interests in Nova Roma, but it ultimately goes nowhere and gets lost in the shuffle when Simonson leaves the book. 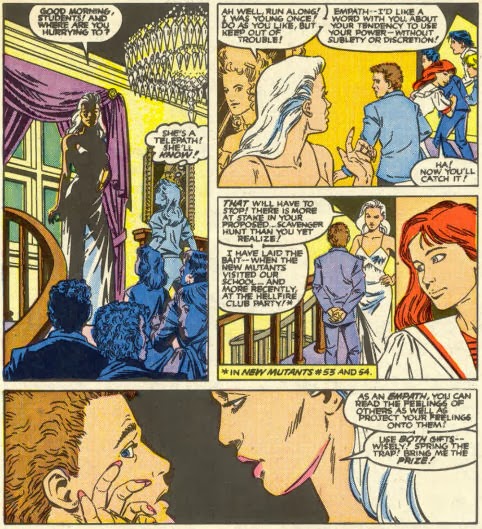 June Brigman, who worked with Louise Simonson on Power Pack, pencils this issue.

A Work in Progress
It's revealed that Sam accidentally freed Bird-Boy last issues, smashing into the building in which he was being held while trying to escape the aliens who drugged him. 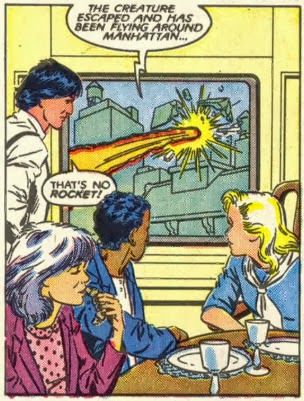 The New Mutants once more don their graduation costumes, the last time, I believe, they do so before making new individualized costumes later in Simonson's run.

Rahne's dialogue throughout this issue is strange - not bad, just generic, absent her usual "Scottish-isms" and rhythm.

I Love the 80s
The New Mutants use the World Trade Center as a vantage point to search for Bird-Boy.

Young Love
Once again, Dani and Illyana are boy crazy, with Illyana bemoaning the lack of boys currently at the school. Again, this isn't entirely out-of-character for teenage girls, it just seems more out of place compared to how Claremont previously wrote these two characters especially. 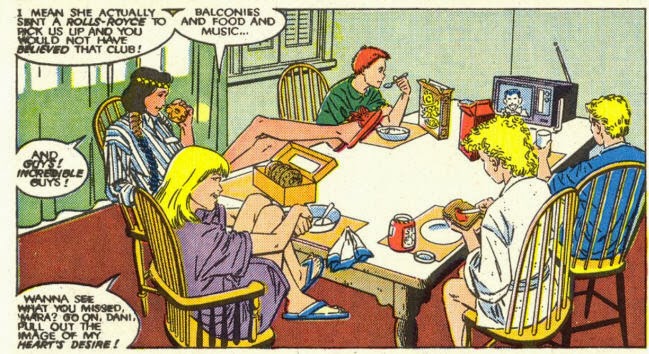 Teebore's Take
This is a marked improvement over Simonson's first issue. Dani and Illyana are still a bit too boy crazy, but the characterization in general is much more in line with what Claremont was doing prior to his departure. Bird Boy makes a larger appearance, but essentially functions as a living MacGuffin and does little more than fly around, making his presence tolerable. Most effective of all is the return of the Hellions, reprising the New Mutants/Hellions "duel" from issue #54, giving the New Mutants established antagonists to play off of instead of generic, drug-peddling aliens.

The return of the Hellions is also used to setup the departure of Magma. While suggesting she has feelings for Empath is a pretty outrageous development (he did try to make two of the school's faculty members sex each other to death), Magma, at least at this point, is understandably upset about feeling attracted to Empath, and is more curious than anything. It reads more like a teenager'ss confused feelings than the awkward development it really is. The idea of Magma feeling more at home at the more aristocratic Massachusetts Academy is certainly consistent with her character, while the reveal that White Queen has been subtly manipulating Magma to this end is, gratefully, more a clever use of the book's history than a clunky retcon.

That her departure (and the idea of certain New Mutants and Hellions transferring schools, a logical progression of their relationship) ultimately goes nowhere in the course of the series is a problem for the future; in terms of this issue, it's handled well enough, and it's nice to see that Weezie, when not hammering away at obvious PSAs, is capable of telling an entertaining story with these characters.

Next Issue
Oh, how the mutants will be known by their deeds tomorrow in X-Factor #20 tomorrow. Next week, the X-Men/Marauders rematch continues in Uncanny X-Men #222, followed by more Bird-Boy antics in New Mutants #57.
Newer Post Older Post Home
Posted by Austin Gorton at 11:00 AM