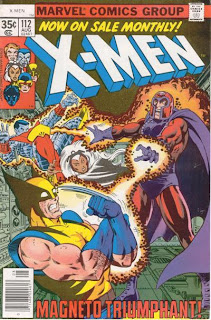 In a Nutshell
Magneto brings the X-Men to his volcano base and defeats them.

Plot
Magneto stands before the X-Men and the fallen Mesmero, declaring his intent to take his revenge on them. He explains how he followed Beast to the carnival after discovering the X-Mansion deserted, then took out Mesmero as the villain attempted to hypnotize Beast. Cyclops orders everyone out of the trailer, and Nightcrawler teleports outside, only to discover the trailer is now high in the atmosphere, held aloft, and the X-Men kept alive, by Magneto's power. After being trailed by a Peruvian fighter jet and jettisoning Mesmero, Magneto and the X-Men arrive at his Antarctic base, hidden inside a volcano. They trailer explodes as Magneto gloats that the X-Men won't be leaving his home.

The X-Men attack, but fail to work as a team, striking instead one by one and getting easily dispatched. Though Phoenix manages to briefly overwhelm Magneto, she appears to reach the upper limit of her power, and Magneto strikes back, taking the final X-Man out of the fight. The team awakens to find themselves strapped into special chairs, unable to move or use their powers. Magneto introduces them to Nanny, a robot who will cater to the X-Men's needs in order to keep them alive. He explains that, in order to pay back Xavier for the humiliation Magneto suffered when reduced to infancy, the X-Men will suffer as he did: to be as helpless as infants, unable to access their powers, but fully aware of who and what they are, trapped for the rest of their lives in a living hell.

Firsts and Other Notables
X-Men resumes monthly publication with this issue.

Magneto's Antarctic base, located inside a live volcano, appears for the first time, as does his robotic assistant, Nanny (so called as she is designed to be the captive X-Men's nanny). Both will appear again from time to time, most notably during the "trial of Gambit" story of the mid 90s.

A Work in Progress
Magneto mentions that, after the X-Men escaped him in issue #104, his revenge on them was delayed by encounters with Captain America and Dr. Doom. An editorial caption refers us to Captain America Annual 4 and Champions 16. In the first story, Magneto recruits a new, temporary, Brotherhood of Evil Mutants (featuring the "classic" lineup of Burner, Lifter, Peepers, Shocker and Slither) while in the second Magneto teams up with the Champions and the Beast to take on Dr. Doom.

John Byrne is a big fan of the original X-Men (unlike Claremont, he'd been reading X-Men since issue #1) and reportedly endeavored to re-assemble as much of the original team as possible. This story temporarily adds Beast back into the mix alongside Cyclops and Jean Grey; the end of the Dark Phoenix Saga will bring Byrne even closer to his goal, with four of the five original X-Men featuring in that story.

The X-Men learn via Magneto that the Magneto who fought them alongside Mesmero in issues #49-52 was a robot, something we (the readers) had known since issue #58.

Magneto tries once again to encase Banshee in iron fibers, as in X-Men 104, but Banshee is "too old an' cagey a bird t'be caught the same way twice," and is prepared for the attack. 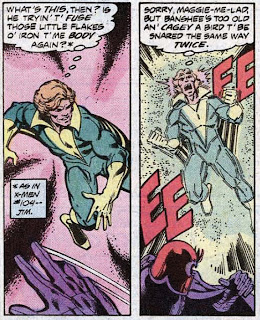 Similarly, Storm remembers not to use lightening against Magneto, assaulting him instead with a localized blizzard. She begins to worry about killing him, and recalling her vow to never take a life, hesitates for a moment, allowing Magneto the opportunity to strike back at her. 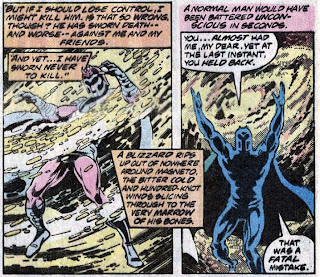 Unfortunately, both Colossus and Wolverine are equally inept against Magneto. 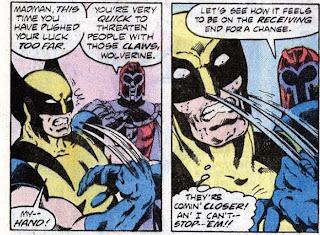 Magneto is ill-prepared for Phoenix's power (he too refers to her as Marvel Girl), and she has him on the ropes until she suddenly finds that her power has been exhausted, similar to how she was surprised by Warhawk in issue #110. 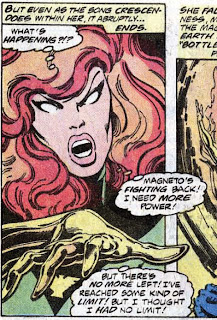 It is established that the lava surrounding the base is being kept out by a "magnetic force bubble"; this will become important next issue...

That 70s Comic
Magneto's involvement in this story hinges on a rather massive coincidence, as he happens to come to the X-Mansion seeking his revenge after the X-Men have been captured by Mesmero, just as Beast arrives, investigating their absence, enabling him to tail Beast to the carnival. Had he arrived at the mansion an hour or two later, upcoming events could have turned out very differently. 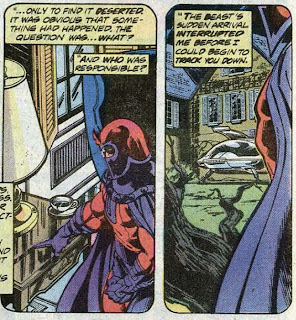 That coincidence does allow for some hilarious flashback panels of Magneto, in full costume, trailing Beast through Mesmero's carnival. 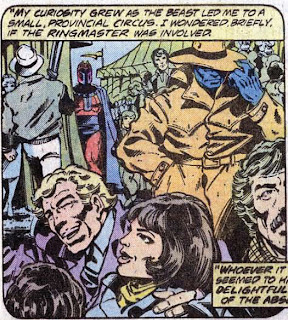 Magneto is the epitome of the Silver Age villain in this one, not killing the X-Men outright (despite several opportunities), preferring instead humiliating revenge, placing them inside an elaborate, themed mechanism designed to torment them while still keeping them alive, gloating all the while. He even has a secret lair hidden inside a volcano. 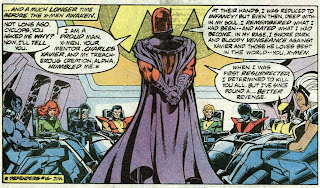 Claremontisms
The first line of the issue is, "the gentleman's name is Magneto", which was the title of issue #104.

Just as in Magneto's last appearance in X-Men, Claremont continues to expand Magneto's power in new and different ways. He zaps Beast with a "multi-kilovolt static charge", uses the extreme cold generated by Storm to become a living super conductor, and shapes "the magnetic forces of the Earth to create a 'bottle-effect' around Phoenix."

Granted, it's not a whole lot different from Magneto "magnetically" repelling ice, but it at least sounds more plausible, and that's really half the battle when it comes to this stuff.

In one panel, Nightcrawler, waiting for an opening to attack Magneto, thinks to himself that Magneto is beating them again. It's a brief, relatively minor moment, but Jason Powell points out that it is indicative of Claremont's approach to X-Men as a whole (as is Storm and Banshee's similar recollections): each issue is another chapter in a larger narrative. Events that happened  in earlier stories will be recalled, referenced and contextualized not just by the readers but by the characters. It's been done before, but Claremont will take the approach to new heights (helped by the fact that he remains on the book for 15 years). While it's easy to take for granted nowadays, when lots of superhero comics are written this way (or noticeably NOT written that way), it is a relatively groundbreaking approach to writing comics for the time.

Teebore's Take
This story, starting in earnest here and concluding next issue, marks the final appearance in X-Men of the Silver Age Magneto. When next he appears following this story, Claremont will begin the work of slowly adding depth to his character, over time re-fashioning Magneto into, if not an anti-hero, then at least a character with enough depth and dimension to blur black and white distinctions between good and evil.

Before that happens, however, Claremont and Byrne deliver a swan song for "classic" Magneto, and it's quite a song. This is arguably one of the great Magneto stories, and my personal favorite of the stories featuring Magneto as an out-and-out villain. The character may still be petty and one dimensional, but Claremont and Byrne manage to make him compelling, and more importantly, frightening, as he first taunts the X-Men then quickly takes the team apart. Cyclops makes it very clear from early on that the X-Men remain outmatched by Magneto, and the ensuing battle in which the X-Men take him on one-by-one (much to Cyclops' consternation) only to have Magneto methodically defeat each member of the team in turn is a great example of Claremont's ability to write really good superhero action (more on that next time). Even more impressively, Claremont and Byrne almost retroactively makes the previous appearances of Magneto in the book's original run more fearsome: so villainous is Magneto in this story that it is (pleasantly) difficult to go back and re-read, say, his posturing at the UN or his creation of the Savage Land Mutates and not have a bit of this Magneto's menace sub-consciously inform that Magneto.

As a true measure of Magneto's villainy in this issue, I remember while reading it as a kid being genuinely frightened by the reveal of Magneto's final revenge on the captured X-Men, and wondering in earnest for the first time how the hell the X-Men were going to get out of this one...
Newer Post Older Post Home
Posted by Austin Gorton at 8:00 AM