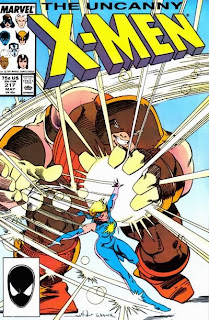 In a Nutshell
Dazzler fights the Juggernaut.

Plot
On Muir Isle, the X-Men train, pitting Rogue, Dazzler and Longshot against Psylocke, unknowingly observed by one of Dr. Doom's scanbots disguised as a trawler fisherman. Over breakfast, Banshee evaluates their performance, while Moira and Callisto attend to the recovering Morlocks. Later, as the X-Men work out, Callisto taunts Dazzler for being weak, causing her to storm off in a huff. Needing a break and frustrated with the life of an X-Man, Dazzler takes a boat to the nearby town of Ullapool. Drawn by music to a local pub, she spends the evening dancing and enjoying herself, making friends with Conal, one of the locals. As they leave the pub, however, they're nearly rundown in the street by a car, and Dazzler recognizes the driver from the X-Men's files: Juggernaut.

Determined to stop him from killing anyone, she grabs a motorcycle to chase after him while Conal phones for help. Dazzler catches up to Juggernaut outside of town, but Juggernaut becomes reluctant to fight her when he realizes who she is, as he's a fan. Juggernaut gives her the chance to step aside and let him go about his business, but Dazzler refuses to back down, determined to prove herself as one of the X-Men. She pulls out every trick she can think of, but nothing slows him down. After putting all her remaining energy into one final blast, she collapses, exhausted, leaving an anguished Juggernaut to cradle her fallen form, believing he's killed her.

Firsts and Other Notables
Dazzler runs afoul of Juggernaut in this issue (what he's doing in Scotland will be revealed next issue), marking the villain's first appearance in the title since he was rescued from Nimrod by the X-Men in issue #194, and it's revealed that Juggernaut is a huge fan of Dazzler's music.

Banshee is on hand this issue, overseeing the training of this contingent of X-Men in the absence of Storm and Wolverine, a role that (unintentionally) foreshadows his time as the headmaster of Xavier's school in Generation X. 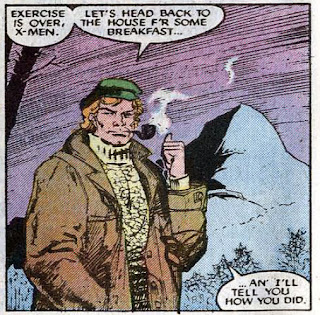 As Rogue and Dazzler fly over a fishing trawler, one of the fishermen refers to Dr. Doom as being his true master - this will be followed up in the Fantastic Four vs. X-Men limited series, which we'll look at in a few weeks. 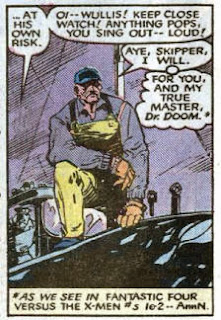 Jackson Guice once again fills in on art, giving the book the same artist in consecutive issues for the first time since issues #210 and #211, though the series is still waiting for its new regular penciller to arrive.

A Work in Progress
Psylock's bionic eyes grant her some protection from Dazzler's light-based attacks. 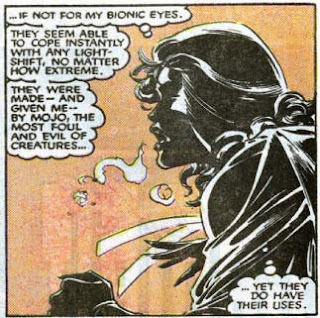 Dazzler insists that she did fine as a superhero on her own before joining the X-Men, and admits she holds a grudge against Rogue for the times Rogue attacked her while still a villain. 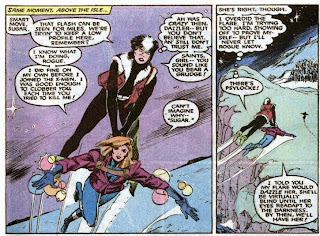 In a bit that's always made me chuckle, Longshot refers to ham and eggs as "burnt animal flesh and unborn baby birds". 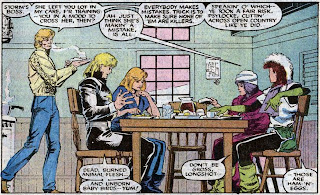 Though she goes unidentified in this issue, the Official Marvel Index notes that Sharon Friedlander is on Muir Isle, attending to the wounded Morlocks, establishing that she came with them to Muir Isle from the X-Mansion. 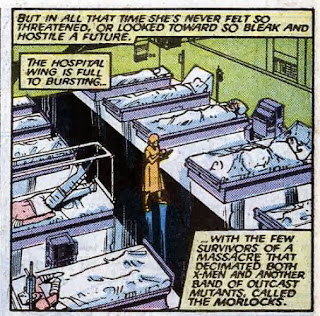 In a neat use of her power (and, it should be noted, I'm not certain this can be attributed to Claremont, as another writer may have used it during her solo series) Dazzler charges herself up by absorbing all the ambient sound around, the end result being a globe of silence surrounding her. 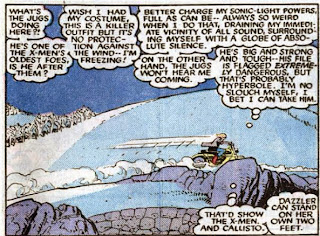 Again, not guaranteed to be a Claremontism, but Dazzler also uses her power to attempt to hypnotize Juggernaut.

Jason Powell opens his post on this issue with a fantastic defense of Claremont's captions and his propensity for purple prose - definitely worth a read if you haven't already (having it pointed out that "I'm the best there is at what I do" is written in iambic pentameter remains one of the greatest things I've learned on the internet).

It's in the Mail
Still no letters page.

Teebore's Take
Catching up with the X-Men stationed on Muir Isle, this issue effectively serves as Dazzler's formal introduction as a member of the X-Men. Though she's hung around on the fringes of the series, having debuted in its pages and served as one of the rare mutants to carry a title independent of the X-Men, this issue examines her in the context of being a member of the team. As such, it establishes the two characteristics that will define her tenure on the book: she is fiercely determined to prove herself capable of being a superhero in general and a member of the X-Men in particular, even while she laments the turns her life took that led her to become a full-fledged, outcast and outlaw, superhero because she'd much rather be a musical performer constantly in the spotlight.

But while Dazzler takes center stage (pun intended), the real standout is Juggernaut. Claremont once again writes him as a more nuanced and sympathetic blue-collar criminal, someone who delights in his power but just wants to do his (criminal) job with a minimum of fuss, a far cry (albeit the transition is grounded enough) from the maniac who just wanted to kick in Xavier's face. The fact that Juggernaut reveals he's a Dazzler fanboy in this issue is a detail I've always gotten a kick out of (while his anguish over apparently killing her adds to the depth of his character), and it's a great use of Dazzler's past relative to the rest of the X-Men, even while it plays off Dazzler's unique role as a public figure amongst the X-Men.

Next Issue
Tomorrow, the New Mutants face off against the Marauders (or do they?) in New Mutants #52, followed by X-Factor #16 on Friday, in which Rusty faces the demons of his past. And next week, the rest of the X-Men join the fight in Uncanny X-Men #218.
Newer Post Older Post Home
Posted by Austin Gorton at 11:00 AM