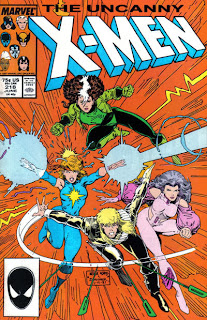 In a Nutshell
The X-Men fight Juggernaut.

Plot
In New Mexico, Alex Summers and Lorna Dane are run off the road by a speeding VW bus. Meanwhile, in Scotland, Dazzler regains consciousness only to realize that Juggernaut, believing her dead, has buried her alive in a makeshift cairn. After Psylocke makes telepathic contact with her, she manages to absorb enough energy from the ambient sound around her to send up a flare, directing the X-Men to her location. Just then, the X-Men hear reports on the radio of the Juggernaut tearing up Edinburgh. Rogue flies the team to the city, and they confront the villain. Attacking him one-on-one, they're unable to stop him, but they regroup and attack as a team. Rogue kisses him, absorbing a portion of his power and enabling her to rip off his skullcap. Dazzler is then able to laser off his skullcap, leaving him vulnerable to Psylocke's mental attack as Rogue and Longshot manage to stop a passenger train in danger of derailing as a result of the damage done by the fight. 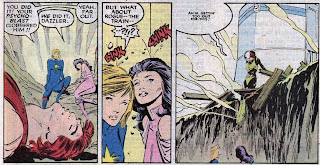 Later, as the X-Men assist in the cleanup and the local authorities arrive to take away Juggernaut, the X-Men learn that his attack was just a diversion, meant to keep the authorities distracted while Juggernaut's partner, Black Tom Cassidy, robbed the Bank of Scotland. Though Rogue rankles at falling for the diversion like amateurs, Psylocke points out that at least they gained experience working as a team. Meanwhile, back in New Mexico, Alex and Lorna track the errant VW bus back to a deserted campsite and, nearby, a crashed Starshark. With horror, they realize it means the alien Brood have arrived on Earth

Firsts and Other Notables
Marc Silvestri (credited here as "Mark Sylvestri") makes his Uncanny X-Men debut with this issue. He is the series new regular penciller, though it's debatable whether or not this issue marks the formal beginning of his run: on the one hand, a different penciller draws the next issue, before Silvestri returns for a string of uninterrupted issues. On the other hand, his run will be notable for its very-modern tendency to consistently feature fill-in artists, so having a fill-in immediately after his run starts won't, in hindsight, seem that odd.

Silvestri marks the first of the seven Image founders to pencil an X-Book regularly (he previously filled in on X-Factor, while fellow Image founder Whilce Portacio has previously guest inked on X-Men and New Mutants). By the time of the Image Exodus in 1992, an event which had significant ramifications on comic books in general but especially for the X-Men, four of the seven founders will be leaving X-Books (Silvestri having handed off Uncanny to first Jim Lee then Whilce Portacio and moving over to Wolverine's solo series).

Alex and Lorna's discovery of a Brood Starshark (named here for the first time after appearing in the previous Brood story arc) sets up a story that won't be returned to until issue #232 (at which point the circumstances of the driver who ran Alex and Lorna off the road will be revealed), though Alex and Lorna's involvement in this issue sets up their appearances in the next.

The Chronology Corner
The flashback fill-in story that comprises most of issue #228 is considered to occur between this issue and the next.

A Work in Progress
It's been mentioned before, but it's noted that Alex is studying geology, while Lorna is a student of archaeology. As the issue opens, it finds them in New Mexico, which has been their home since they left the X-Men after Giant-Size X-Men #1 (not including time spent as Erik the Red's brainwashed flunkies).

In a neat detail, though Psylocke is unable to read Juggernaut's mind due to his helmet, she is able to locate him by zeroing in on the panicked thoughts of those people who are encountering him. Rogue once again kisses Juggernaut to steal a portion of his power, something it's noted she did in Marvel Team-Up #150. In a neat artistic detail, as Rogue absorbs Juggernaut's strength, his muscles get smaller, causing his arms bands to slide down to his wrists. 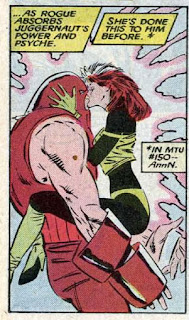 As the X-Men hand over Juggernaut to the authorities, both Psylocke and Dazzler use their powers to help protect the X-Men's identities, a precursor to their post-"Fall of the Mutants" condition.

I Love the 80s
Remember kids, seat belts save lives! 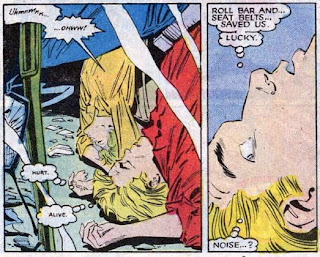 I assume the Dark Carnival in the background of this panel is a reference to a real store, though I don't know the story behind it nor who placed it in the panel. 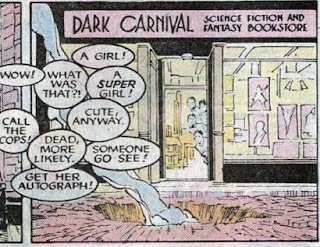 Brigadier Lethbridge-Stuart and Sgt-Major Benton, the local authorities to whom the X-Men give Juggernaut, meanwhile, are Dr. Who references.

Artistic Achievements
Continuing the clever exploration of Dazzler's powers, here she is able to recharge herself after her fight with the Juggernaut (while buried alive) by absorbing the relatively minor and mundane sounds around her, which results in some more great sound effects/lettering from Orzechowski. 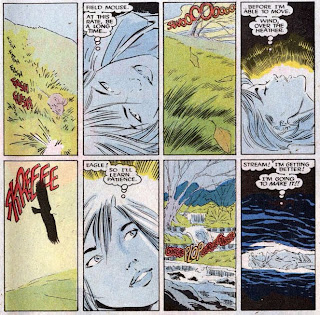 The Awesome and Terrible Power of Cyclops Rogue
Rogue reminds us all that she must keep her distance for fear of accidentally touching someone and absorbing their memories and abilities. 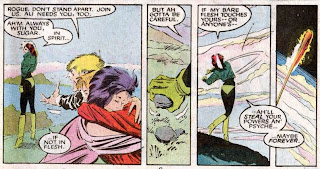 For Sale
Okay, it can't possibly get more 80s than this: an ad for the VHS release of a skateboarding movie starring Josh Brolin called Thrashin'. 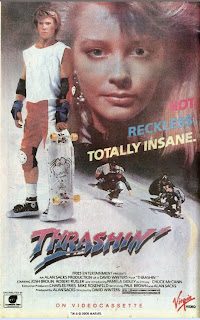 Bullpen Bulletins
Jim Shooter discusses Marvel's then-recent acquisition by New World Pictured Ltd in this issue, suggesting this will lead to a series of Marvel TV and movie projects. Obviously, this won't turn out to be the case (at least not directly), and according to Sean Howe's excellent book on the history of Marvel, at least one New World executive believed that by purchasing Marvel, New World was acquiring the company that made Superman comics and all the rights to that character.

Teebore's Take
This issue is notable for featuring Marc Silvestri's first work on the title (and, arguably, serving as the beginning of his tenure as the book's new regular penciller). He immediately brings a chic sexiness to the characters, something that will continue throughout his run, but with Dan Green on hand as inker, the art stays consistent with the grittiness Green brought to Romita Jr.'s pencils, continuing to augment the tone Claremont has set for the book (this issue is also notable for being a one of the more egregious examples of Claremont's tendency to setup a plot only to leave it dangling for months on end, with its introduction of what will become the long-simmering Brood arc).

Beyond that, this is a fairly straightforward X-Men vs. Juggernaut fight. Picking up where last issue's training session left off, the purpose of the fight is to put the "junior" members of the X-Men, led by the not-quite-a-senior, not-quite-a-junior Rogue, on display, showing them coming together and gelling as teammates, rather than as a collection of individuals. In that regard, the story succeeds, and if it all seems a bit old-fashioned in terms of structure (the X-Men try to stop Juggernaut, get beaten back, then regroup and succeed), the ending, in which it's revealed the entire fight was just a distraction while Black Tom robbed a bank, helps keep the story firmly in Claremont's recent tradition of post-modern heroics: the X-Men are victorious in physically defeating Juggernaut, and have gained a much-needed lesson in teamwork, but at the end of the day, they still lose, as killing time getting beaten up by the X-Men is exactly what the Juggernaut wanted.

Next Issue
The New Mutants go to a party in New Mutants #53 and X-Factor meets Rictor in X-Factor #17. Next week: the return of the Impossible Man in New Mutants Annual #3.
Newer Post Older Post Home
Posted by Austin Gorton at 12:00 PM