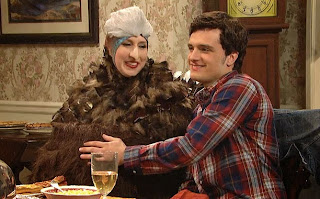 For whatever reason, Josh Hutcherson wasn't given much to do in this episode, and ended up largely relegated to the straight man roles that hosts whom the writers don't think can handle much usually get (and most of the non-straight man work he got, like Lil' Peanut, was built around the fact that he's kinda short), which is a shame, because he seemed like he may have been capable of handling more (maybe the writers just didn't want to roll the dice on a first time host who's pretty much just done one notable thing in his career?).

The end result was another solid, if unexciting, episode, a bit of a letdown after the previous two strong ones but another episode with few completely bad sketches - even the sketches I didn't enjoy as much weren't fundamentally flawed or poorly executed, and at this point in a transitional season, "not many awful" sketches is almost as promising as "lots of really good sketches".

Other Thoughts
Confining all the Hunger Games material to the monologue was probably a wise decision (though I've never seen the movies nor read the books, so I dunno, maybe fans wanted more), and I thoroughly laughed at both Kennan putting his keys in the SNL Hunger Games bowl and Josh Hutcherson's shocked realization that there are Hunger Games books.

The Girlfriends Talk Show sketch continued to make the most of its limited setup (and Aidy Bryant) by changing up the format and bringing in Hutcherson as a cute boy instead of another new best friend for Cecily Strong's Kira, which prompted a new level of horrified (and hilarious) outrage from Aidy Bryant.

I'm not entirely sure what that sketch in which Hutcherson lip-synched to The Outfield's "Your Love" was trying to do (I was particularly confused by the opening minutes, which made it unclear whether the sketch was supposed to be set in the 80s or not), but I think I enjoyed it just for the way script contorted itself so that Vanessa Bayer's character appropriately set up the next line of the song.

The whole "two employees mock their fellow employees" recurring bit has never done much for me, but the use of props and elaborate staging in this one did make me chuckle, simply for the increased absurdity of the whole thing (and Taran Killam's Mandrew is hilariously creepy -  I could stand seeing him in a sketch all his own).

After a string of episodes featuring strong pre-taped bits, this episode trotted out three (three!) such sketches, but none of them did a whole lot for me, with all falling firmly into this episode's zeitgeist: more amusing than outright hilarious while still not awful or terribly misconceived.

Least Favorite Sketch: That whole CEO with the body of a baby thing. I'll give New White Guy version Cell Phone Commercial credit: he sold the hell out of the bit, physically (I couldn't help but laugh when he went straight from standing upright to sitting on his butt). But the sketch couldn't decide if he was an adult with the body of a baby (and the mind of an adult) or just a really large baby, which was distracting, and it felt very much like the kind of thing a different show, spoofing SNL's propensity for one-gag recurring characters, would have come up with. Also, I'm very afraid this IS going to become a recurring sketch...(and quick survey of the internet tells me this was a very polarizing sketch, with people either loving or hating it outright).

Favorite Sketch: Nothing really stood out to me this week, so I'll go with the Girlfriends Talk Show, which continued to find life in a recurring sketch and probably made me laugh the hardest.

Morgan: Becky Weathers? She's a witch with a "B" in front. She’s always taking unflattering photos of me and then texting them to my phone when she knows I have very limited texting!

Morgan: Um, you know, there's a study somewhere that, uh, weird people are the best at romantic bedtime for private under-the-sheet fantasy moments.
Kira: What are you doing?
Morgan: I don't know!

Cecily Strong: A lawmaker in Pennsylvania has introduced legislation that would help slow the exploding coyote population by paying hunters $25 for every one they kill. Said the lawmaker who introduced the bill, "Meep meep!"