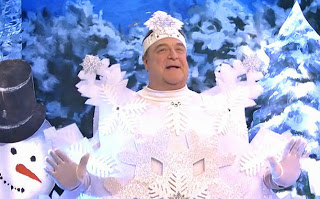 Another cromulent if unexciting episode. Few of the sketches were awful, with most having at least one or two funny bits, but there were very few top-to-bottom successes. John Goodman, a seasoned pro at this,  certainly gave it his all and acquitted himself well, playing everything from straight men to more whacky characters, but overall the sketches seemed to have a hard time coming together.

Other Thoughts
Thirteen hosting gigs for John Goodman is pretty impressive, but his consecutive streak from 1989 to 2001 impresses me even more. I mean, Roseanne likely earned him most of those spots well into the nineties, and Monsters, Inc. likely landed him his last hosting gig, but there's at least a few years there where he wasn't doing much of note and was getting asked back just on the strength of his talent (he's third on the all-time hosting list between Alec Baldwin (16) and Steve Martin(15)).

Two weeks in a row with a monologue song. 'Tis the season?

Making fun of Guy Fieri is like shooting fish in a barrel, but I will never tire of it. His impression just lands so firmly in the realm of "funny cuz its true." I also particularly enjoyed that Bobby Moynihan played all the Pawn Star guys.

The winter concert sketch that led off the night wasn't anything special, but it did build nicely, first from character to character and then in the level of craziness as we swung through the group several times. I laughed at Keenan's character having to deal with an unwanted boner despite myself.

So that "The Three Wiseguys" sketch was a sketch. Yikes. Some of the lines were actually pretty funny (like the whole "do we even know his last name?/Christ, I don't know" bit) but the delivery just killed it. I'm not sure if it's just because Stallone and DeNiro are old and/or were thrown this bit at the last minute, or half asleep, or if the slow pacing was part of the act, but whatever the reason, the whole thing was painfully stilted and low energy.

This was the first Weekend Update where it really felt like Cecily Strong was the lead anchor, with Seth backing her up (she handled most of the news bits aside from the first ones, and interacted with Keenan's Santa, leaving the Drunk Uncles for Seth), and for the most part it worked. She's definitely grown more comfortable in the role over the course of this season.

John Goodman's Drunker Uncle, unfortunately, didn't get much to do (having the two uncles sing the Billy Ocean song would have been funnier if Drunk Uncle hadn't done it already himself, I think), but mostly skates by just for the fact that making John Goodman Drunker Uncle is so obvious in retrospective you can't NOT do it.

The whole "John Goodman's an attractive lady" sketch didn't do much for me (though Taran Killam's disbelief that everyone found Goodman attractive was played really well, and I liked his string of objections), but as with the giant baby sketch a few weeks ago, Goodman sold the hell out of the bit (no surprise, given his recurring role as Linda Tripp in the 90s), and I can appreciate that.

Least Favorite Sketch: Putting aside "The Three Wise Guys", which was a special kind of awful, I'll say "The Christmas Whistle". I get what they were going for, and obviously the point was that the whistle was annoying, but, well, the whistle was really annoying.

Favorite Sketch: "Shallon". Nice to see this one back, and to see Pedrad in a recurring sketch, but as before, it's the little details on the edges that elevated this one: both Aidy Bryant and Bobby Moynihan had some great lines, and Kate McKinnon's weary teacher was fantastic in a low-key way.

Santa: You’ve heard of Secret Santa. Well here’s a secret for you, I’m black as hell.

Drunker Uncle: All I want for Christmas is my two neighbors not to be Chinese anymore.

Captain Lemke: If you want to do something nice for Santa, surprise him with some nice milk and cookies.
Shallon: If you really want to surprise him, you can hide in the oven where the cookies are.
Noel: Or I'll hide in the refrigerator, where the milk is!
Aidy: I'm gonna hide in a dry cleaning bag!

Shallon: Then come to my house and put me out!
Lemke: I don't want to come to your house!
Bobby: Do your damn job you coward! You're letting a child burn!