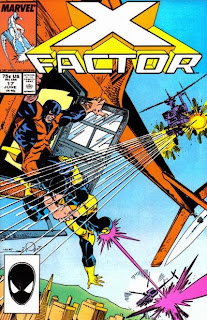 In a Nutshell
The first appearance of Rictor and the Right.

Plot
Thor returns Iceman, his powers now amplified by Loki, to X-Factor headquarters on the day of Angel's funeral. Learning of Warren's suicide, Bobby is enraged at the thought of Warren killing himself because humans cut off his wings. When X-Factor arrives at the funeral, they find pro- and anti-mutant demonstrations being waged, and only the timely arrival of Leech and Caliban prevent Bobby from blowing X-Factor's cover when he's confronted by reporter Trish Tilby and has difficulty controlling his power. When X-Factor enters the church, they discover an anti-mutant screed spray painted across the altar. Meanwhile, Apocalypse prepares his fourth horseman. As X-Factor arrives back at their headquarters, Cameron Hodge receives a call from the governor of California, saying that the X-Terminators are threatening to destroy San Fransisco via a mutant named Rictor. Though Hodge turns the governor away, X-Factor insists on helping, and Bobby suggest they go as the X-Terminators, rather than X-Factor, to show that not all mutants are evil. 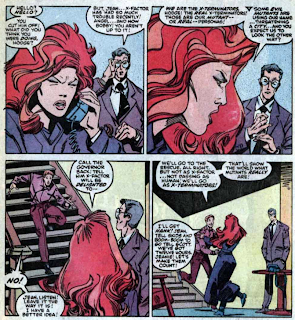 Flying to San Fransisco, X-Factor is joined by Caliban, helps them locate Rictor at a skyscraper in the center of the city. As they approach the building, they're attacked by a group calling themselves the Right. Fighting off the Right's helicopters, they enter the building just as it starts to shake. Inside, they discover that Rictor is just a teenager, captured by the Right and tortured into activating his power. Iceman freezes the building to stop the shaking as Marvel Girl briefly cuts off the blood flow to Rictor's brain, shutting down his power and stopping the earthquake, a display of power that leave Cyclops believing Marvel Girl really is Phoenix. As X-Factor flees the scene, they are pursued by the police, but Iceman gives an impassioned plea over the radio, explaining that people, not the X-Terminators, tried to destroy the city, that mutants saved it, and that people should know mutants by their deeds and be glad they exist. At X-Factor headquarters, Hodge watches, upset that Iceman's speech was picked up by the media. Admitting it's a setback, he nevertheless continues to plot against X-Factor, believing that if he can topple Scott, the rest will follow.

Firsts and Other Notables
This issue is the first appearance of Rictor, a young mutant with the ability to create vibrations and trigger earthquakes. Setup as the villain of the issue but revealed to be an unwilling pawn of the Right, Rictor will become another X-Factor trainee before joining the New Mutants and, later, X-Force and the Jamie Madrox-led X-Factor. He is also notable for eventually coming out as gay, and for being one of the mutants with a higher profile to lose their powers on M-Day and not regain those powers in some manner for a long while (almost to the point that M-Day was more or less fully reversed).  Also, we will eventually learn that his real name is Julio Richter. By that logic, Cyclops' real name should be "Scott Cychleps", 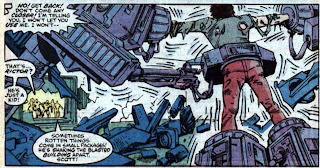 The Right make their first appearance, the latest anti-mutant human organization to openly target mutants, following in the tradition of Reverend Stryker's Purifiers from "God Loves, Man Kills." The Right will eventually be revealed as responsible for triggering the explosion that seemingly killed Angel, remain a significant thorn in X-Factor's side up through "Inferno", and they continue to be one of the got-to anti-mutant organizations the X-Books will occasionally dust off. 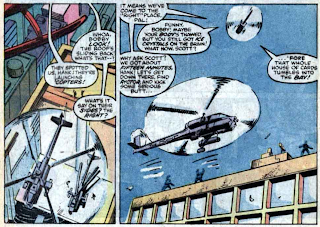 Though the full extent of his eventual villainy isn't yet made clear, this issue establishes that Cameron Hodge is up to no good, as he's seen spying on Scott and talking about destroying X-Factor, and the final pages suggest an involvement with the the Right.

Iceman returns to the series following his three issues jaunt in Thor, dropped off at X-Factor HQ by Thor (sporting his new armor). As a result of Loki's machinations, Iceman's power has been supercharged and become more difficult to control (he needs Rusty's help to unfreeze himself, and later manages to completely ice up a skyscaper), a condition with which he will wrestle for a while. 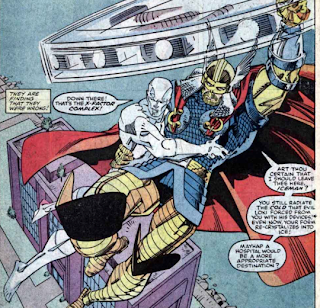 Caliban effectively joins X-Factor in this issue, helping them track down Rictor and donning an X-Terminators uniform and mask.

Angel's funeral is held in this issue, though of course there's no body, and the scene is turned into a media frenzy and comes to an early end when X-Factor enters the church to find an anti-mutant epitaph scrawled across the wall.

It's noted that neither Candy nor the X-Men are at Angel's funeral; the former, I believe, will eventually be given a good excuse (she's been kidnapped by the Right), while the later is never really explained, beyond a general notion (from reading the other title) that they're busy and out-of-the-country at the time (though you'd think eventually the X-Men'd catch up on the news and be shocked to learn their former teammate has died and was the financial backer of X-Factor, but we can't possibly have the two teams interact with one another this soon, now can we?).

Boom-Boom disappears in this issue, teleported away by the mutant Ariel to get involved in the events of the Fallen Angels limited series. 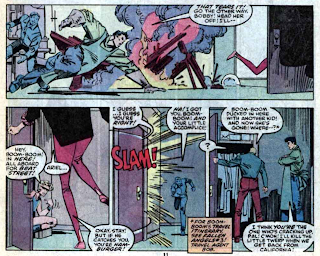 A Work in Progress
Even the narrative captions are suggesting that posing as mutant hunters perhaps wasn't the best idea. 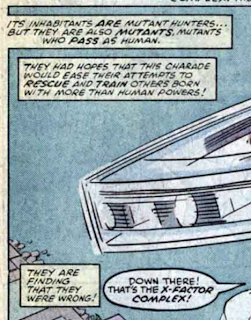 Between last issue and this one, Skids has gotten better at lowering her force field. 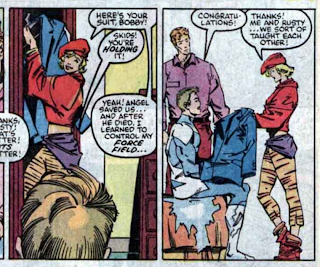 This issue finds several characters, but especially Iceman, referring to humans as "the humans", which is an odd bit of phrasing that sticks out and seems out-of-character (it comes off as a little too "us vs. them", even moreso than I think Simonson intends it to). 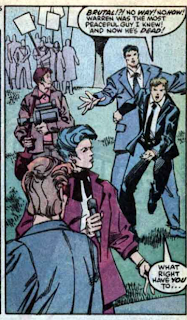 Trish Tilby is covering Angel's funeral, and her cameraman gets in a funny line, noting that his camera always seem to have problems when he's around X-Factor.

I Love the 80s
Jean spews some exceptionally-expository dialogue in this issue. 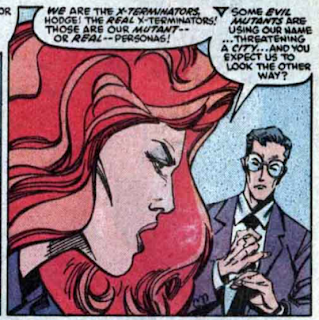 Two panels after Caliban says he's never flown in a plane before, he wonders why X-Factor keeps spare costumes under the seats where the lifejackets usually go... 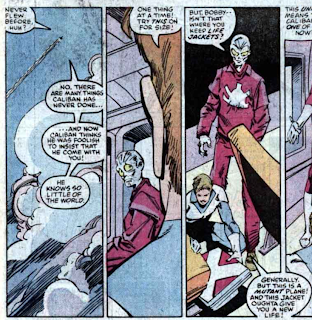 The Awesome and Terrible Power of CyclopsOnce again, try not to make everything about you, Scott. You're at Angel's funeral.

This issue finds Scott on the verge of a mental breakdown, as he hallucinates Angel and Maddie, then becomes convinced that if Jean was Phoenix, none of this would have happened. Then, after a significant display of power from Jean (stopping the blood flow to Rictor's brain), he starts to act as if she is Phoenix after all. 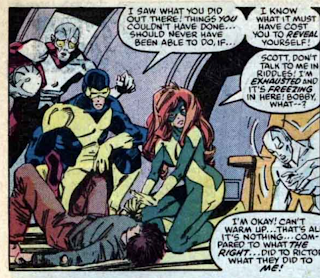 Human/Mutant Relations
Thor suggests dropping Iceman at a hospital, but Iceman says that, as a mutant, there's no way he could go to a hospital.

The issue ends with Iceman giving an impassioned speech as X-Factor flees the local police, saying that not all mutants are bad and should be judged individually by their actions, and that people should be glad mutants are around, especially since a group of them just saved San Fransisco from being destroyed. 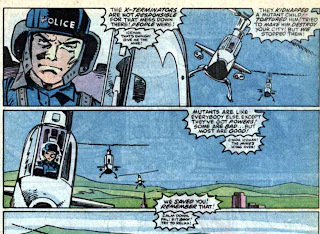 Teebore's Take
After the relatively quiet and low key previous issue, the volume is cranked back up to "11" in this one, with enough exclamation points to put Stan Lee to shame. Featuring the funeral of Angel and ostensibly the immediate fallout from his death, this issue is notable for setting up the next step in Simonson's rehabilitation of the title: giving X-Factor a human, anti-mutant adversary that can eventually be tied to the book's initial, ill-advised premise. As Iceman notes in this issue, for all they've said their goal is to help mutants, all X-Factor seems to do is fight evil mutants (and most of the histrionics this issue come from Iceman, as he rails against anti-mutant prejudice and the futility of X-Factor's mission in the wake of Angel's death).

To his point, X-Factor as yet to fight any Sentinels (traditionally used as a physical representation of humanity's prejudice toward mutants, making the metaphor physical so the superheroes have something to punch) or any agents of the government, no Stephen Langs or Reverend Strykers: they're trying to combat anti-mutant prejudice, but the conventions of the genre have forced them mostly into conflicts with fellow mutants. With the introduction of the Right, X-Factor finally has a specifically anti-mutant villain its characters can physically fight, and this is an important step in Simonson's gradual attempt to extricate the characters from their mutant hunter schtick and find them a new role.

Next Issue
The battle we've all been waiting for: Warlock vs. the Impossible Man in New Mutants Annual #3.
Newer Post Older Post Home
Posted by Austin Gorton at 12:00 PM