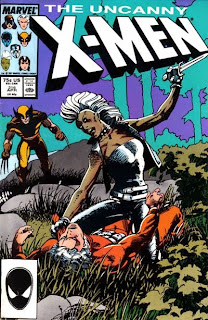 Plot
In the Adirondack Forest, a near-savage Wolverine is struck by a car, damaging the vehicle and stranding its occupants. Elsewhere, Storm and Priscilla set a trap for Super Sabre, one that will likely kill him, but when the super speedster approaches, Storm fails to spring the trap, refusing to kill, much to Priscilla's frustration. On Muir Isle, Moira MacTaggert is awakened by the arrival of the rest of the X-Men, returning to the island with the last of the massacre survivors. Back in New York, Crimson Commando and Stonewall discover the trap Storm refused to spring. Realizing she passed up an opportunity to kill Super Sabre, Stonewall begins to doubt whether Storm is really the criminal they think she is, though Crimson Commando remains certain. On a nearby ridge, Super Sabre is ambushed by Storm. Though she manages to overpower him, Priscilla triggers an avalanche, seemingly burying them both. 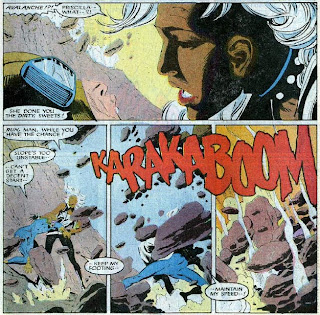 Later, as the stranded motorists finish repairing their vehicle, they're confronted by Priscilla, who kills them both and steals their car as an animalistic Wolverine watches from the woods. However, the car soon breaks down again, and Storm catches up to Priscilla, knocking her out and using her as bait to lure Stonewall into a bog. But when the bog begins to drag the man underwater, Storm is forced to help save his life. With Storm distracted, Priscilla attempts to kill her, but is slain in turn by Crimson Commando. As he moves to finish Storm, Wolverine arrives, his failure to save the motorists returning him to his senses. Storm challenges Crimson Commando to a duel, and though she wins in the end, she refuses to kill him, instead telling him and Stonewall to turn themselves in to the authorities. Later, Storm and Wolverine watch as the old soldiers are arrested. Wolverine says the X-Men are walking a similar path, and wonders how the X-Men can keep from making the same mistakes.

Firsts and Other Notables
The issue ends with Crimson Commando and Stonewall turning themselves in to the New York State Police. From there, they'll be offered a place with Freedom Force and the opportunity to earn a pardon for their crimes. Super Sabre is believed to have died in the course of this issue, but he will eventually turn up alive and well and join his compatriots in Freedom Force. 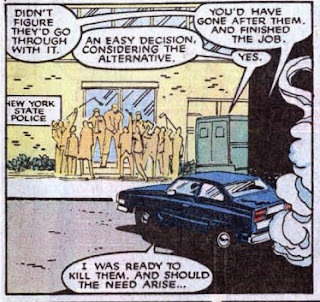 Jackson Guice fills in on pencils, making this the sixth issue in a row to feature a different artist than the previous issue. Barry Windsor-Smith, meanwhile, provides the cover art.

A Work in Progress
It's established this issue that the group of injured Morlocks (and X-Men) that left the mansion last issue were merely the last such group to be ferried to Muir Isle.

Storm notes that thanks to Malice, she has a much harder time trusting her instincts. 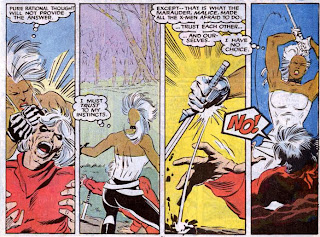 Crimson Commando insists that Storm is the same as he is, but she argues that, tonight at least, she was better. 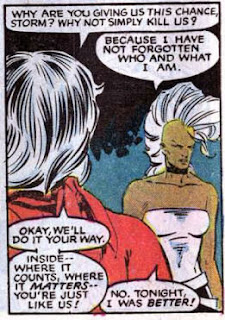 The issue ends with Storm asserting her unwillingness to kill her enemies even while she reiterates the desire for the X-Men to take the fight to their enemies instead of waiting to be hit and react accordingly.

I Love the 80s
Priscilla, the spoiled rich kid turned drug dealer, apparently shops at the same stores as Skids and Boom-Boom.

Claremontisms
Priscilla refers to a fight as a "scrap", which doesn't seem to fit her character.

When Priscilla gets mad at Storm for sparing Super Sabre, Storm tells her it was "my decision, my responsibility". 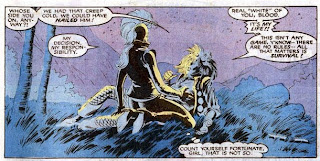 The Best There is at What He Does
It's revealed in the opening pages of this issue that smelling Jean's scent last issue, and the confusion and lack of trust in his senses that triggered forced Wolverine to slip into an animalistic state. 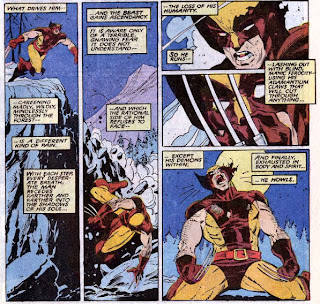 For Sale
The back cover features an ad for the Marvel role playing game. 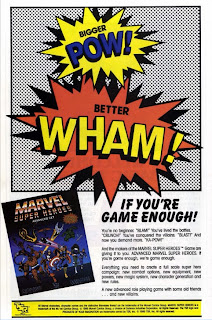 It's in the Mail
One issue after apologizing for the infrequency of letter columns and catching up on letters, the letters page is missing once again.

Teebore's Take
For all its flaws, I've always rather liked this issue. While the art is a definite step down from the Alan Davis art in the previous issue, this is always the issue that comes to mind when I think of how badass powerless Storm can be, as she manages to essentially defeat three super-powered villains with her bare hands (and a little MacGuyvering). In a lot of ways, it's also the culmination of the journey Powerless Storm has been on (in part because Storm's next big character arc finds her working to regain her powers), as she finds the balance between the harder edge she'd adopted and her more traditional principles, doing what it takes to survive but refusing to become a cold blooded killer. In the process, she regains her trust in her instincts (shaken by Malice specifically and the Marauder attack in general) and affirms her intent to lead the X-Men in a more proactive direction, taking the fight to their enemies. Thus, a balance is struck between the serene goddess and hardened warrior sides of the character.

All that said, there's no denying this is far from required reading. Though it advances a few character and plot arcs, and though we'll see these villains in the pages of X-Men again, this two-parter nevertheless has a hard time rising above its fill-in feel, and the art in this issue is a big culprit in that fact. The Storm/Crimson Commando confrontation in particular suffers: what could be seen as a reprise of the Storm/Callisto fight in issue #170, this time featuring Storm refusing to strike a killing blow as an indication of the journey her character has gone on in the ensuing issues, instead comes across as simple and pedestrian, lacking the verve and energy that Paul Smith brought to that earlier fight. As a result, the confrontation feels less like a culmination of a long running character arc and more like the routine conclusion to a gap-bridging fill-in story. Which is, for as much as I enjoy this little two-parter, particularly for the way it highlights a powerless Storm, ultimately what this story largely is.

Next Issue
Tomorrow, Professor X makes a decision in New Mutants #51, followed by a turning point in Angel's life in X-Factor #15. Next week, the Juggernaut returns in Uncanny X-Men #217.
Newer Post Older Post Home
Posted by Austin Gorton at 11:00 AM