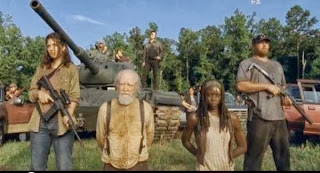 Whether it’s a season finale or (in this case) a mid-season finale The Walking Dead always tries to go out with a bang. (This mid-season finale literally had a bang thanks to the tank the Governor brought along.) It was the ultimate showdown between the Governor and Rick. It was quite the spectacle but it left me feeling conflicted. I wasn't sure if this was all happening too late or too soon.

The first half of this episode was about building tension. Rick and the Governor have a face-to-face at the fence of the prison. Rick thinks everyone can peacefully coexist. Heck, for a few brief moments I thought the show might go in the tentative coexistence of the two camps direction. But then Rick had to make a big speech rallying for a bloodless resolution and forgiveness. The longer and more impassioned Rick spoke the more nails were being pounded into poor old Hershel's coffin. The Governor, always averse to peaceful compromises and not killing, will have none of this "peace" talk. A gruesome decapitation later and the episode's second half of mayhem begins.

The second half of the episode was mainly just the war between the two camps. The action was pretty fun (if not a bit ridiculous) to watch at times. At other times it was intentionally difficult to watch. Watching (mostly) good people shoot at each other should be a bit difficult to watch and appropriate gravitas was given at certain points. In the end the prison was destroyed, the Governor got his ultimate comeuppance and the group was scattered.

Most of the aftermath is left for the second half of the season. If things go the way I expect we’ll have to deal with a split group for a while (which I’m not looking forward to) but they’ll ultimately find each other again. If they find each other accidentally and not by some previously agreed upon emergency plan then I’ll probably find it unrealistic and wonder how small this world they live in is. But we got a long wait until we see how that all shakes out.

Anyway, in a vacuum this episode was pretty good. I would have enjoyed it more if not for the nagging feeling that the timing of this battle was off. At first I simply decided that if this is the direction they wanted to go they should have just ended Season 3 where this episode ended. However, I also believe that strict adherence to narrative rules leads to boring stories. You certainly need surprises and you want your story to have some authenticity. Real life doesn't have convenient three act structures and very similar conflicts can happen repeatedly. Real life is unpredictable.

It’s not like having two Rick/Governor showdowns throughout this series is necessarily a bad thing. I think my main issue with it is timing. They wanted the Governor to survive after Season 3 and eventually antagonize Rick once again. That’s fine but don’t do it so soon. Let the show breathe and have viewers experience new things. To be fair, we did get the sickness plot line to start the season but after that one story arc we were back to Season 3 Governor shenanigans. In fact, the two Governor plots are so close together it makes the plot sandwiched between the two feel ancillary and forgettable.

So, my final analysis is that if you wanted to have the Governor and his camp battle Rick and his camp again they should have at least waited until the end of Season 4 or, preferably, waited until Season 5. But, again, this was still a good episode on its own and we are now officially moving on from the Governor. The future of The Walking Dead is completely unknown. Let's hope that’s a good thing.

Other Thoughts:
When the Governor is giving his speech about how dangerous the world is and how they need the prison to be protected perhaps he shouldn't do so in a wide open field.

So Lilly, seemingly the person that would be most susceptible to the Governor’s BS, wasn't having any of it. First she questioned whether invading the prison was the only solution. Later, the Governor says to stay near the river with Meghan since the water will keep them safe against zombies. “So let’s find a place with a lot of water.” I like the cut of her jib.

I was pleased by Daryl’s reaction to the news about Carol. (Remember the Carol stuff? One thing I didn't even think about until this episode was how the Governor episodes really hurt the momentum of any of the subplots going on in Rick’s camp.) Anyway, Daryl wasn't pleased with the news but he wasn't enraged or completely dismissive of Rick either.

I know next to nothing about military artillery but I have to think that tank ammunition is pretty hard to come by. I also am not sure how many shells a tank holds or how it reloads. So I guess I should just assume The Walking Dead’s portrayal was completely accurate. I should…but I’m not.

I was pleased to see zombies show up during the battle. Too often zombies don’t appear when convenient for the plot. However, where did all the fence zombies go?

If I was Rick as soon as I got to the prison fence I would've spouted off about everything the Governor has done. Just in case the people don’t get what kind of person he is (which they didn't).

So the Governor heads off to find a place that will protect Lilly and Meghan and thus leaves Meghan vulnerable to an attack that takes her life. Irony? (Not to be confused Martinez’s death which also had a fair amount of IRONy. Wakka wakka!)

Anyway, why the hell was Lilly so far away from Meghan?

And where were the other kids in the camp?

The Governor saying that he and Rick’s camp wouldn't be able to coexist because of Andrea was odd. Does he assume that no one would forgive him because Andrea was so special? Or does he blame them for her death? Frankly, if I was the Governor I’d be more concerned with being in the same living space as the woman I sexually assaulted. But I’m not sure why I keep bringing that up, though, since it’s apparent everyone on the show has forgotten about it.

I also like the cut of Lilly’s sister’s jib. She is the only one in that group that questioned the logic of following a homicidal maniac into war. A man, might I add, who had just decapitated a guy for no real good reason except to spark a bloody, avoidable battle.

I suppose it’s no surprise that Lilly and her sister were the most averse to what was going on. They had been mostly protected from the horrors of the zombie apocalypse.

So, the Governor is certainly insane enough to just say “Screw it! Let’s bust down the fence! If we can’t have this prison no one can!” But why is his camp listening to him? They’re defeating the entire purpose of this battle!

Is it just me or does everyone have much better aim when shooting at zombies as opposed to other people?

Daryl using a zombie as a human shield was pretty bad ass but fairly ridiculous considering there was another scene specifically discussing how bullets can travel through a human body.

When the kids killed that woman was that supposed to be a “Hell Yeah!” moment? Because I found it disturbing and I hope that’s what the show was going for.

However, Michonne stabbing the Governor through the chest was indeed a “Hell Yeah!” moment.

So Judith might be dead. This was supposed to be a gut wrenching scene but as Rick and Carl emoted I felt nothing. The problem with Judith is that I’m not even sure that was her name. I’m serious; I’m pretty much guessing. The fact is Rick’s daughter has always seemed to be nothing more than a prop. The only prominent role she played was when she needed baby formula. Aside from that we only saw her a few times when someone was holding her or in the background. We never really saw Carl or Rick bond with her. Half the time I forgot she existed. So while Rick and Carl’s reaction was appropriate it rang a bit hollow.

And I think we all have to admit that when Michonne left the Governor for dead without explicitly finishing him off (and, seriously, it would've taken like two seconds) we all were convinced we hadn't seen the last of the Governor. Thank God for Lilly. (Although, at first I thought it was Maggie which would have made me even happier. But, I know, no one on the show even remembers...)
Newer Post Older Post Home
Posted by Dr. Bitz at 1:16 PM