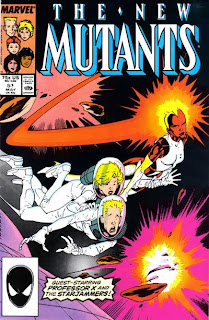 In a Nutshell
The New Mutants return home while Professor X opts to remain in space.

Plot
As the Starjammers repair their ship, Professor Xavier telepathically learns more about recent events from the New Mutants. Horrified by what he sees, he realizes he must return to Earth with his students. Back on Earth, Magneto and Storm help create a breakwater to protect a town from a hurricane, discussing the Hellfire Club's offer of an alliance, with Storm arguing the benefits of such an arrangement. Aboard the Starjammer, Illyana locks herself in her room, refusing to come out. Over Dani's objections, Xavier helps Karma possess Illyana, forcing her to explain her actions: she wishes to stay on the Starjammer, and not return to Limbo, where she'll be forced to reclaim her dark side once again. Just then, Xavier telepathically detects a cloaked fleet of Shi'ar starships, poised to attack the Starjammer.

He is able to help the damaged ship evade the Shi'ar attacks, but faces a quandary: he is unwilling to risk the New Mutants' lives by keeping them on the Starjammer during the fight, he would be unable to return with them to Earth without leaving the Starjammers to die. Ultimately deciding he can do more good with the Starjammers, even beyond their current fight, he decides he must send the New Mutants home without him. However, Illyana refuses to return to Limbo, and Karma is forced to once more use her power to make Illyana return the New Mutants to Earth. When they arrive, Illyana is furious, and disappears into Limbo, telling them she'll make them pay. Meanwhile, in Manhattan, Magneto and Storm formally accept the Hellfire Club's offer, joining the Lords Cardinal as the White King, though Magneto still wonders if the alliance will ultimately save or destroy them.

Firsts and Other Notables
Magneto and Storm, representing the X-Men, join the Hellfire Club in this issue, accepting their offer of an alliance and jointly taking the title of White King (though in the future, Magneto's involvement with the club will be far more significant than Storm's).

Storm also mentions "Plan Omega" for the first time; we'll eventually learn that this is a plan to fake the X-Men's deaths in order to allow them to operate more freely, without fear of their loved ones or associates being targeted by their enemies. The plan will ultimately be put into effect, though not quite in the manner the X-Men originally intended. 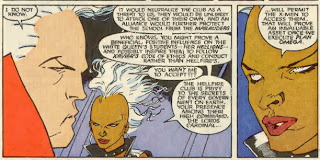 After four issues away, the New Mutants return to the school at the end of this issue. 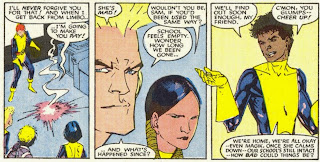 Reunited with the New Mutants and able to return to Earth with them, Professor X nonetheless decides to remain with the Starjammers in this issue, determining they need him more than the New Mutants. He'll next appear, briefly, in X-Factor #50, which is a ways down the road.

Kevin Nowlan, an acclaimed artist who has never had a lengthy or groundbreaking run on any one title, fills in on art.

A Work in Progress
Reading the New Mutants' minds to learn more about the Morlock massacre, Professor X also learns this issue that his original students have formed X-Factor (suggesting that now the New Mutants are also aware of the connection), though of course he doesn't learn that they're only posing as mutant hunters, and believes they've betrayed his dream for some reason. 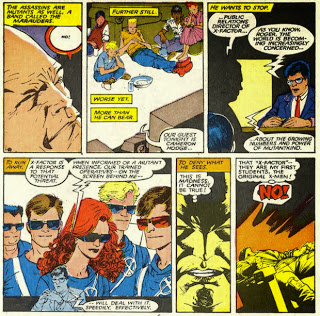 Helping repair the Starjammer, science fiction fan Sam marvels at finding himself living in a sci-fi novel (not that he doesn't already have a girlfriend who lives on a Dyson sphere). 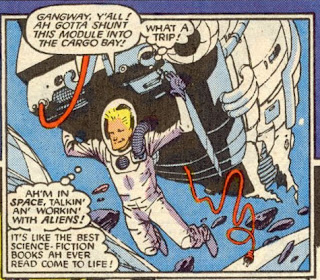 At one point Xavier telepathically grants Karma access to Illyana's mind so that Karma can possess her, though it's not clear why Xavier doesn't just take control of Illyana's mind himself. 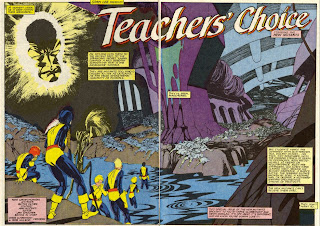 "Professor Xavier is a Jerk!"
Needless to say, Dani is (understandably) none too impressed with Xavier twice using Karma to take direct Illyana's actions against her will. 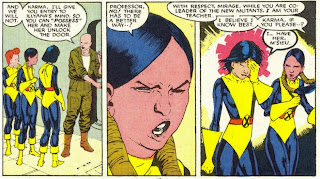 Teebore's Take
Reunited with the New Mutants, able to return to Earth thanks to Illyana's teleportation ability, this issue is as much, if not moreso, about Xavier deciding whether or not to stay with the Starjammers as it is a Classic Claremont Quiet issue following the resolution of a story arc. We get some nice character moments from the New Mutants (chiefly Illyana's fear of returning to Limbo and Sam's glee at finding himself living a sci-fi novel), but having brought him back for the book's celebration of fifty issues, Claremont is chiefly concerned with justifying Xavier's continued absence from the book, especially after he looks into the New Mutants' minds and shares their experience of the Morlock massacre and learns about the seeming betrayal of his original students forming X-Factor.

The end result probably reads better in hindsight, when we know that Xavier isn't going to return to Earth for quite some time, so the why of it is something of a formality, but Claremont does make an effort to sell it nonetheless by putting the Starjammers, in the short term, in life-threatening danger without Xavier's help and, in the long term, establishing the importance of the success of their mission to overthrow Deathbird and how much Xavier can personally help that cause. It's not a perfect justification for Xavier's continued absence (while Xavier is necessary to help the Starjammers evade their immediate attackers, no one ever bothers to suggest that Illyana could teleport everyone, including the Starjammers, off the ship to safety), but that Claremont even bothered to justify it at all is a welcome effort. This is the kind of issue, one that gives the characters a chance to rest up and reflect on recent events and the narrative a moment to catch its breath, that comics don't seem to have the time for often enough anymore.

Next Issue
Tomorrow, Angel deals with the loss of his wings in X-Factor #15. Next week, Dazzler takes the spotlight in Uncanny X-Men #217 and the New Mutants reunite with Magneto in New Mutants #52.
Newer Post Older Post Home
Posted by Austin Gorton at 12:00 PM