How I Met Your Mother 9x12: Rehearsal Dinner 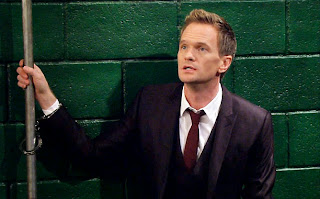 So I get that we're supposed to view Barney's surprise rehearsal dinner as a grand romantic gesture (or at least that the writers think it is one), and heaven knows I'm well aware that Marshall and Lily's "we keep no secrets from each other" business is a bunch of claptrap - at the very least, Christmas kind of sucks if you don't keep secrets from your spouse, and I threw my wife a surprise party for her 30th birthday, the details of which I kept secret from her for a long time. But you know what I didn't do in the time leading up to the reveal of her party? Lead her to believe I was actually ruining an event that was very important to her, just to make the eventual surprise that much more surprising.

Granted, doing so is very much consistent with Barney's character, and is the kind of thing you'd expect from a guy who proposed to Robin in the most overly-elaborate, manipulative way possible. The problem is that the show keeps trying to sell, both in this episode and via "The Robin", this trait of Barney's as something that is admirable and deeply romantic, and frankly, it's not (it is, in fact, borderline creepy and highly troubling). Keeping secrets from a loved one to surprise them is fine; putting them through hell first just to sell the inevitable surprise is just a dick move. And like most of the Robin/Barney-centric episodes this season, it once again makes you wonder why these two are even getting married.

Other Thoughts
I'm also not entirely sure why Barney even had to bring Canada to Robin. I enjoy a good round of Canadian jokes more than most, but other than her friends giving her a hard time about it, no real good reason was given for why they couldn't just have the wedding in Canada. Yes, Barney mentioned that most of their friends and family were in New York, but Canada isn't that much farther away (relative to if the show was set in, I dunno, Kentucky), and everyone is already traveling at least a little ways to get to Farhampton.

Near the end of the episode, as Barney was still being a petulant jerk in his belief that Robin was trying to fool him, his dickery reached such a level that I began to suspect the only way the episode could end in a way that didn't completely destroy Barney's character was to reveal that Robin was in fact trying to pull one over on Barney after all, or that Barney's antics were part of another elaborate hoax. The former might have been the better option, if only for Barney to have gotten a taste of his own medicine.

I did enjoy the idea of the story playing out in the background of the Canadian joke montage, as a couple meets, falls in love, has a kid, and dies, all while the gang mocks Canada.

Also appreciated the callback to the Ted/Marshall gift giving/thank-you-card-sending misunderstanding in the flashback, as Ted reminds everyone he's great at giving gifts only for Marshall and Lily to give him the stink eye in return.

Similarly, Barney giving Robin the signed Wayne Gretzky photo at the surprise Canadian rehearsal dinner was a nice touch - we had no reason to suspect he'd give it to her as anything more than a simple gift, but in hindsight, of course it fits right in with the whole setup.

Lily coming clean about her problems with Marshall, and her subsequent conversation with Ted, made for a nice subplot to an otherwise disappointing episode. As I've said before, one of the better parts of this season has been the opportunity to see Ted and Lily interacting as the old friends they are, and it was nice to not have Lily get all shrill and broad about the issue for once.

Marshall: Canada? What are you going to do, hire a regular dog sled or a stretch?

Ted: Canada? Are you registered at Tim Horton’s?
Newer Post Older Post Home
Posted by Austin Gorton at 11:00 AM