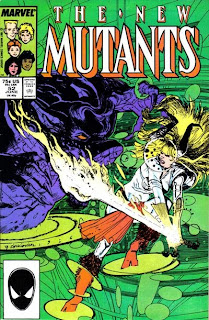 In a Nutshell
Magneto responds to the New Mutants recent actions.

Plot
In the Danger Room, the New Mutants face off against simulacrums of the Marauders, and are easily defeated, with the entire team killed or wounded in barely five minutes. When Roberto complains that they lost because the session was a high-level scenario designed for the X-Men, Magneto counters that his intention was to show them just how much danger they were in when they left the school against orders during the Morlock Massacre, and proceeds to restrict the New Mutants to the school grounds until they can prove themselves capable of acting maturely. Meanwhile, in Limbo, Illyana, who disappeared in the midst of the Danger Room exercise, continues her fight against S'ym for control of Limbo, eventually returning to Earth, frustrated by her constant struggle to contain her dark side and feeling alone with Kitty and Peter on Muir Isle. 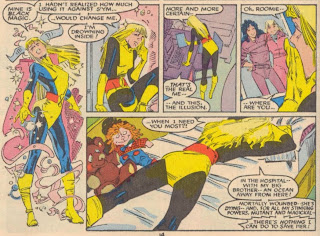 Elsewhere on the grounds, Dani and Rahne share their recent experiences in their relative futures, while Roberto attempts to teach Sam how to play soccer. In the headmasters office, Karma asks Magneto for permission to search for her siblings, but he insists such action isn't safe, assuring her he's doing everything he can to find them. Later, Magneto confronts an-increasingly isolated Illyana, and she takes him to Limbo to experience firsthand her struggle. In Limbo, he helps her battle the revitalized S'ym, impressing her with his power. Returning to Earth, Magneto reminds her of his own dark past and tells her that even though they may both fail in their struggles to control their dark sides, that doesn't mean they shouldn't try. Thankful for his support, Illyana teleports away, joining her teammates for a soccer game.

Firsts and Other Notables
In an effort to show them how dangerous the Marauders are, Magneto pits the New Mutants against the villains in an X-Men-level Danger Room scenario. The team lasts five minutes, with all its members "killed" or "wounded" in the process.

Karma, who was said to be working as Professor Xavier's secretary in the book's early days in order to help provide for her siblings, and who presumably kept on in that job for Magneto, is seen helping Magneto in that capacity in this issue, one of the few (if not only) times we actually see Karma acting as the school's secretary. 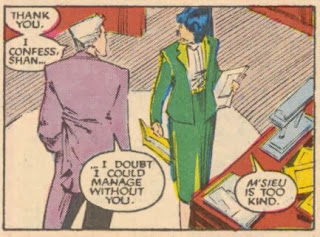 She then asks Magneto for permission to leave the school and search for her missing siblings. Magneto denies it, and says he is doing everything he can to find them, a claim that doesn't fill Karma with much confidence, which will shortly motivate her to leave the team for good. 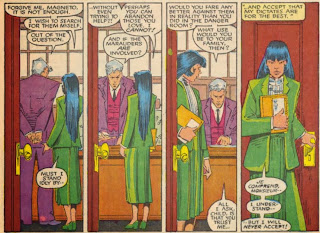 Chris Claremont's upcoming departure from the book is announced on the letters page in this issue, with X-Factor writer Louise Simonson named as his replacement. It is said here that he is only taking a leave of absence to focus on his first novel (the sci-fi book First Flight), but he will ultimately leave the book for good after issue #54, never retaking the reins from Simonson (barring a pair of inventory fill in stories).

Rick Leonardi fills in on pencils, with X-Men's Dan Green guest inking and lending Leonardi's pencils a grittiness that fits the issue well.

The Chronology Corner
Between this issue and the next, the New Mutants appear in Fallen Angels #1, in which Roberto and Warlock take a leave of absence from the team. We'll be looking at that series in a couple weeks.

A Work in Progress
Roberto notes that Magneto uses his magnetic power to nullify gravity around himself, enabling him to fly. 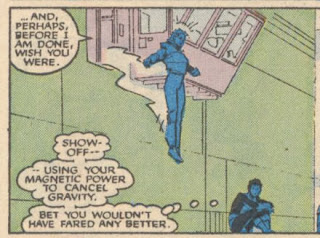 Illyana continues to battle the techno-organic S'ym for control of Limbo. 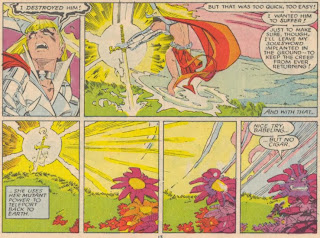 Roberto is teaching Sam soccer (which Roberto is said to love almost as much as Magnum, P.I.), telling him it's only fair as Roberto learned baseball.

As with the X-Men, Magneto has been similarly unable to repair Cerebro since its destruction by Sabretooth in Uncanny X-Men #213. 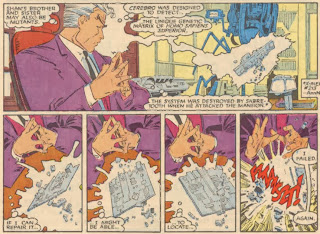 They're Students, Not Superheroes
In the wake of their disobedience in leaving the mansion in issue #46, leading in turn to their disappearance without explanation, Magneto effectively grounds the New Mutants in this issue.

Teebore's Take
Even moreso than the previous issue, this the Classic Claremont Quiet issue that allows the characters to decompress from the New Mutants' most recent adventure. It opens with a somewhat shocking sequence showing the New Mutants being thoroughly defeated by the Marauders in a Danger Room scenario, a pleasant reminder that for all their recent success, the characters are still students. After that, we get a handful of character moments: Illyana continues her power struggle in Limbo, Dani and Rahne try to move past their experiences from the future timelines, Roberto teaches Sam to play soccer. But more importantly, this issue gives Magneto a chance to react to the New Mutants actions over the last half dozen issues.

It ends with Magneto offering support to Illyana, helping her get past her immediate feelings of being helpless in the face of her growing dark side, comparing her struggle to retain her humanity to his own need to restraint his more villainous tendencies. It's a strong counterpoint to Xavier's relationship with the character, both the more fatherly approach seen in issue #50 and the more pragmatic approach in #51 (where Xavier asked Karma to take control of Illyana's mind), and will color their relationship moving forward. And in Magneto's (understandable) grounding of the New Mutants, we see the future seeds of his relationship with the team planted. Apparently, his characterization in this issue stuck with incoming writer Louise Simonson, as she will write Magneto as an increasingly-shrill tyrant, constantly grounding the students and trying to control their actions. Here, it's an understandable and measured response to the New Mutants' rash actions in issue #46; in the future, it will become increasingly more tedious and out-of-character.

Next Issue
Tomorrow, the X-Factor trainees take the stage in X-Factor #16. Next week, the X-Men take on Juggernaut in Uncanny X-Men #218, followed by the return of the Hellions in New Mutants #53.
Newer Post Older Post Home
Posted by Austin Gorton at 11:30 AM