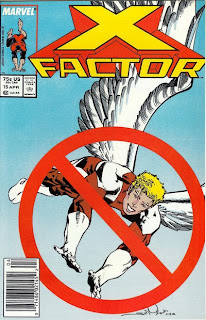 In a Nutshell
Angel dies.

Plot
Following his surgery, Warren wakes up to discover in horror that his wings are gone. Meanwhile, in Alaska, Scott identifies the body of a red-haired woman as Maddie, and vows to find whomever killed his wife and son. At X-Factor headquarters, Masque picks a fight with Boom-Boom, but an overworked Hank lashes out at Boom-Boom, giving her laundry duty as punishment. At the hospital, a surly Warren orders Jean out of his room, telling her she should have let him die. Jean calls Scott and asks him to come back to New York to help Warren, but he says he needs to stay longer to bury Maddie. At the X-Factor complex, the remaining Morlocks discuss returning to the tunnels, but Hank insists they'll be safer with X-Factor. Masque angrily attacks Hank, prompting a fight between Masque and Caliban, from which Caliban emerges victorious. Though the Morlocks are grateful for X-Factor's help, they point out they couldn't save Angel from being mutilated by humans. 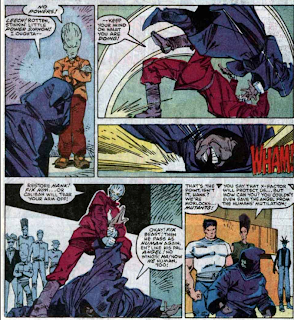 In Alaska, Scott buries Maddie, then realizes he's needed in New York. Meanwhile, Warren sneaks out of the hospital and gets into cab headed for Kennedy Airport, saying he needs to fly one last time. High above the city, Apocalypse tells his Horsemen that the time is right to gather their fourth member, and then they'll be ready to thunder over the earth and cull the weak from the strong. Below, at the X-Factor complex, Hank and Bobby bid farewell to the Morlocks as they return to the tunnels. After they've gone, unknownst to Hank, Bobby suddenly disappears in a flash of light. The next morning, Jean discovers Warren has left the hospital. She and Hank track him to the airport, arriving just as Scott gets in from Alaska. They contact the tower and realize Warren is about to take off in his plane. They watch as he banks the plane out over the ocean, moments before it explodes.

Firsts and Other Notables
Angel seemingly dies in this issue, blowing himself up aboard his plane, unwilling to live without his wings and believing his death will make it easier for X-Factor to continue their work. Future issues will reveal that Angel did, in fact, survive the explosion, but for the next several issues, the characters and (readers of the time) are led to believe Angel is dead. 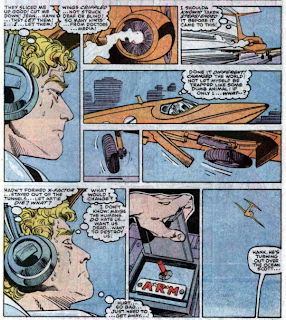 Apocalypse's headquarters, a massive spaceship floating, cloaked, above New York, appears for the first time. The ship will eventually be revealed to be sentient and cleverly dubbed "Ship", and will also serve as X-Factor's headquarters for a time. Even later, Ship will be revealed as the source of Professor, the computer program which guides Cable and runs his space station. 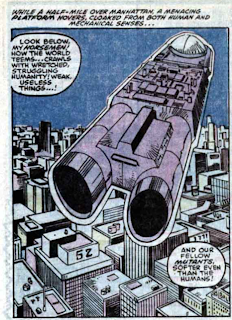 Similarly, the three individuals whom Apocalypse recruited to serve as his Horsemen appear in their Horsemen guises for the first time.

Scott identifies the body of the red haired woman the Anchorage police found in issue #13 as Maddie, kicking off a period of time in which he believes his wife and son to be dead. 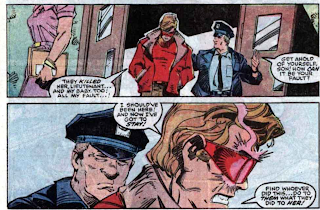 The surviving Morlocks that have been staying with X-Factor, including Caliban, Masque and Leech, return to the Morlock Tunnels in this issue, Erg and Caliban having scouted the tunnels and found other surviving Morlocks living there. Skids, however, remains behind. 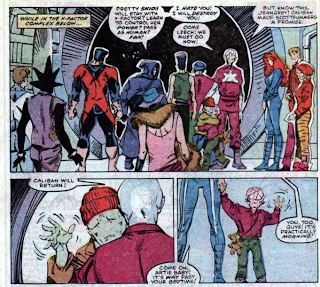 The Chronology Corner
Iceman disappears mid-sentence at the end of this issue, and a footnote points to Thor #377, where it's revealed that Iceman has been captured by Loki as part of a nefarious scheme. Iceman will proceed to appear in Thor 377-379 before returning to X-Factor in issue #17. I won't be giving those issues their own post, mainly because all Iceman does in them is be a prisoner and get a power boost, the latter of which will be dealt with significantly in the pages of X-Factor, rendering little in the Thor issues required reading from our perspective. 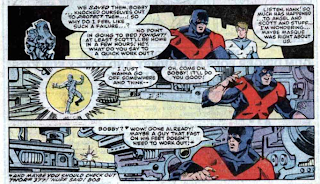 A Work in Progress
Warren wakes up from surgery and understandably freaks out when he realizes his wings have been amputated. 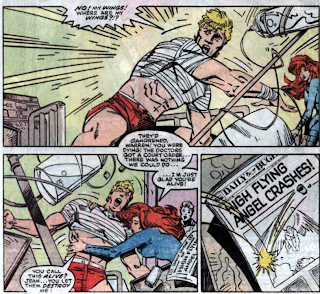 In a training session, Hank tries to help Skids lower her force field by tempting her with chocolate, which once again begs the question of how she's eaten thus far.

Just before leaving for the airport and his apparent death, Warren once again thinks that X-Factor would be better off if he was dead. 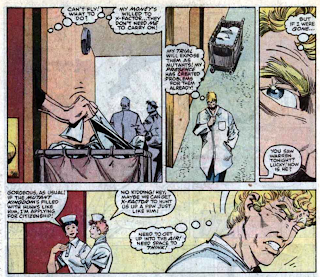 Apocalype lays out his "the strong must survive" philosophy in its most direct and succinct form yet. 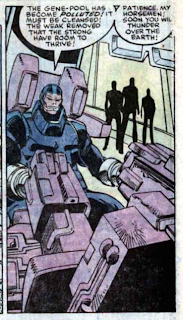 The Awesome and Terrible Power of Cyclops
Warren just killed himself, Scott. Try not to make it all about you. 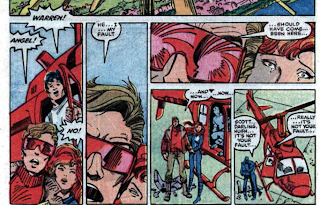 Scott Summers, Husband of the Year
At Maddie's lackluster funeral, Scott admits that there were times where he'd actually wished Maddie was dead, so he'd be free to be with Jean. 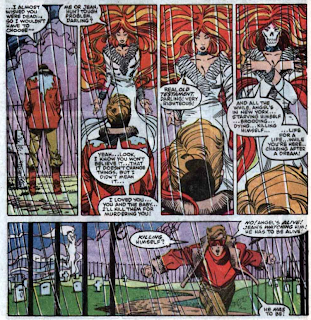 Teebore's Take
The climax to the first arc in Simonson's efforts to reinvent Angel, this issue is one of the most significant issues of the series for the way it sets up developments that will reverberate throughout not only this title, but the entire X-Men narrative in the years to come. But while the issue-ending climax of Angel's apparent death is certainly historically significant (and still somewhat shocking, even if you know what's coming), man, does Simonson ramp up the intensity of the soap operatics in this one. Warren spends the issue angsting about the loss of his wings. Scott spends the issue angsting about Maddie's apparent death. Jean spends the issue angsting about Warren's condition and Scott's absence. Only Hank and Bobby escape largely angst-free, and that's because Bobby gets spirited away to Asgard and an increasingly-harried Hank is busy running the entire X-Factor household himself.

This level of angst is understandable (particularly in Warren's case) but when the volume is jacked up to eleven for everyone, it becomes like so much white noise and loses some of its impact. Simonson has certainly been steadily raising the intensity level of all this stuff in the title since she came aboard, but this issue might represent the fever pitch of those efforts. Knowing where all this is heading, it's hard not to enjoy it as a significant event in the lives of these characters, but man, reading everyone yelling about their feelings through clenched teeth for twenty-two pages gets downright exhausting.

Next Issue
Dazzler takes on Juggernaut in Uncanny X-Men #217, the New Mutants reunite with Magneto in New Mutants #52, and Rusty takes the stage in X-Factor #16.
Newer Post Older Post Home
Posted by Austin Gorton at 12:00 PM