In a Nutshell
Spider-Man and the X-Men team up to fight Juggernaut and Black Tom.

Plot
In New York, Spider-Man returns home and unsuccessfully attempts to dodge his landlady. In Asia, Juggernaut returns to the temple where he received his powers and takes the Ruby of Cyttorak, intending to give it, and thus the power of the Juggernaut, to Black Tom for his birthday. Back in New York, the X-Men complete a training session in the Danger Room, after which they see a news report on Juggernaut's Asian rampage. Seeing the same report, Spider-Man leaves his apartment to check the city for Juggernaut. Meanwhile, Juggernaut arrives at Black Tom's birthday party in Manhattan, and gives him the Ruby of Cyttorak. When he touches it, Tom suddenly grows in size and mass to match Juggernaut. At the X-Mansion, Nightcrawler uses Cerebro to locate Black Tom, and the X-Men head into the city. In Manhattan, an angry Tom demands that Juggernaut turn him back to the way he was, and a fight breaks out between them that spills out into the streets. 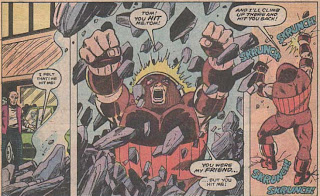 In the process, they realize that Juggernaut's power has been split between them. Responding to their fight, Spider-Man arrives, and the two friends focus instead on fighting Spider-Man. He holds he own against them, but is eventually worn down, at which point the X-Men arrive. Rogue touches Black Tom, absorbing his power, and takes on Juggernaut herself. In the process, she touches him as well. Overwhelmed by Juggernaut's memories, Rogue goes on a confused rampage until Juggernaut retrieves the Ruby of Cyttorak and with it, his full power. He launches the ruby into orbit so that no one can find it again, then grabs Black Tom and escapes via the sewers. Unwilling to pursue the pair and risk destroying New York's sewer system, and with the cops closing in, the X-Men and Spider-Man depart, having gained a greater respect for one another.

Firsts and Other Notables
This is the final issue of Marvel Team-Up, cancelled despite reportedly strong sales to be replaced by a third exclusively Spider-Man title, Web of Spider-Man. It is a double sized issue and cost $1.00

This issue unveils a new skullcap for Juggernaut, one comprised of his armor that fits snugly around his head and his worn beneath his regular helmet, meant to provide additional protection against psionic assault should his helmet be removed. 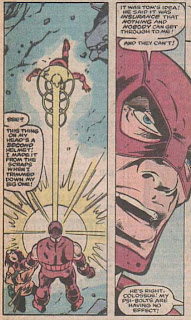 On sale at the same time as Secret Wars #11, Spider-Man references having learned that his black costume from Battleworld was an alien symbiote, and mentions its currently being contained by Reed Richards. 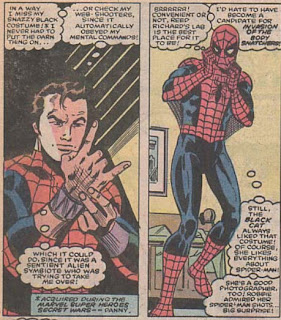 Though not yet an official member of the team, this issue marks Rachel's first adventure with the X-Men.

Near the end of the issue, Juggernaut launches the Ruby of Cyttorak into orbit, so as to prevent anyone else from touching it and stealing all or some of his power. I'm fairly certain it returns to Earth eventually, but I'm not sure if it's ever shown doing so or if a later story just features it again without explanation.
This issue is written by former X-Men editor and future New Mutants and X-Factor writer Louise Simonson, and contains some of her earliest work writing for the characters she used to edit. The cover was done by Barry Windsor-Smith, of "Lifedeath" fame.

The Chronology Corner
Cannonball guest-starred in the previous issue of Marvel Team-Up, in a story that is considered to occur just prior to New Mutants #22. Little of consequence happens (he helps Spider-Man defeat a one-off villain while trying to buy a hat for his mom's birthday), which is why I didn't devote a post to it.

A Work in Progress
Juggernaut references his defeat by Spider-Man in Amazing Spider-Man #230. 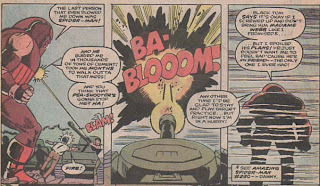 It's revealed that Juggernaut has taken to bolting his helmet onto his armor to make it harder to remove his helmet.

Rachel notes that in her future, Juggernaut and Black Tom helped the X-Men fight against the government.

Nightcrawler is able to use Cerebro to find Black Tom thanks to a recording of Black Tom's thought patterns made by Professor X.

In light of their confrontation in Secret Wars #3, Spider-Man worries the X-Men may side with Black Tom and Juggernaut when they first arrive.

After wearing a modified version of her green costume for a few issues, Rogue is back in her orange and brown costume from immediately following Secret Wars.

Nightcrawler does the old "teleport around his foe as he punches him" trick. 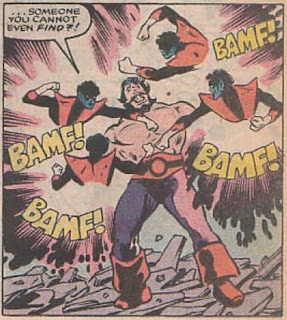 I Love the 80s
Black Tom has invited some fantastically attired women to his party. 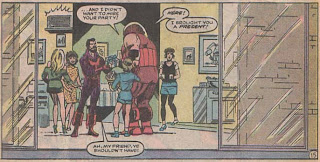 A newspaper Spider-Man is reading contains an ad for Web of Spider-Man.

Teebore's Take
This is a largely inconsequential issue, especially in terms of the X-Men narrative, but it is notable for being one of the first times former X-Men editor Louise Simonson writes any of the characters she used to edit, making it a look ahead to her time helming both the X-Men spin offs (and, in perhaps a nod to both her time as the X-Men editor and a willingness to take some cues from Claremont, she's careful to feature the team as it was around the time of publication, a consideration other writers may not have made). It's also features a rare Black Tom/Juggernaut team-up for this era (though Juggernaut will pop up again during Claremont's X-Men run, I'm pretty sure Black Tom disappears after this issue until appearing early in Rob Liefeld's X-Force run).

But aside from some mild historical notes, there isn't much to the issue. The art is workmanlike and the story routine, though Simonson gets some mileage out of the Juggernaut/Black Tom friendship, something which is always fun to read for being so unique, as well as the idea that Black Tom may not want the power of the Juggernaut (and that Juggernaut never thought to ask), resulting in them humorously snipping at one another throughout their initial confrontation with Spider-Man. Honestly, that's about all there is worth mentioning, but I thought it was worth a post acknowledging the end of a series that gave us Captain Britain (us Americans, at least) and Karma, as well as provided an additional creative outlet once upon a time for Chris Claremont. And though the series ends here, the two stars of this issue, Spider-Man and the X-Men, will go on to dominate superhero comics in the course of the next decade (moreso than they already were), making this both a little bit the end of an era and a hint at things to come.

Next Issue
Tomorrow, we chill out with the Iceman limited series (sorry, couldn't resist), then return to Uncanny X-Men with issue #189 next week.
Newer Post Older Post Home
Posted by Austin Gorton at 11:00 AM