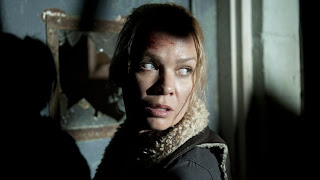 Whether intentional or not, this episode felt like an attempt to redeem Andrea's character, after she spent most of the season making mooney eyes at the Governor, refusing to see Woodbury for what it is, and then passively trying to broker a peace. Unfortunately, in finally driving Andrea to positive action, this episode also unintentionally highlighted the show's often problematic relationship with its female characters, in the process leaving Andrea worse off than ever.

After finally waking up to the reality of her situation (thanks to some help from a similarly awakened Milton), Andrea rushes out of Woodbury on foot, determined to warn Rick and the others that the Governor is setting them up, her insipid waffling finally coming to an end when its made clear the Governor really does have it out for Michonne personally. So Andrea runs, and the Governor goes after her (for reasons that remain unclear, because a lot his post-eyepatch motivations are muddied, at best). What follows is, perhaps, the show's most overt horror pastiche yet (which is saying something on a show about zombies), in which Andrea plays Laurie Strode to the Governor's Michael Myers, a thoroughly unhinged and seemingly unrelentless and unstoppable foe.

And though Andrea gets a moment of badassery when she unleashes a stairwell full of walkers on the Governor, in the end, the dictates of the plot (which can't have Andrea succeed in her mission for fear of robbing the final two episodes of their dramatic weight) require that, unlike Laurie Strode and her other slasher film foremothers, Andrea is unable to overcome her monster, and the woman who was once forced to argue (to other women) that her place wasn't in the kitchen cookin' and cleanin', concludes her most proactive action of the season back where she began, worse off than ever, completely at the mercy of the Governor. It is clearly a by-product of the show's plotting, but nevertheless another unsettling use of a female character. Sadly, it almost would have been better for the character if the Governor had just killed her outright, but hopefully, now that she's finally stopped being such a dunce, the last two episodes will give Andrea a chance to repudiate her damsel in distress role from this episode and, really, most of her actions this season.

Other Thoughts
In other seemingly course correcting plotlines, we see another glimpse of Andrea and Michonne's pre-Woodbury time together, learned little more about the past of Tyrese's group, as well as the fact that Milton knew the Governor before Woodbury. The show would have been better suited covering these things, in greater detail, sooner, but its still nice to see the effort being made.

We learned that Michonne's pet zombies were people she knew, and whom she believed deserved what they got, which was interesting but also largely pointless.

This was another episode that benefited greatly from its focus. Ignoring the prison (one glimpse of Rick aside) entirely and keeping the focus on Andrea and Woodbury made things all the better.

In a plotline that is all about a showdown between two leaders who are varying levels of crazy, I find Tyreese's "what the hell did I stumble into?/I just want to survive" pragmatism refreshing, so much so that he seems like a real character and not just T-Dog 3.0 any longer.

That said, his conflict with the guy who was apparently part of his group seemed to come out of nowhere, and was hard to care about beyond the reaction it prompted in Tyrese.

Why in the world did Martinez take Tyreese and his group out to the zombie pits? That seems like a pretty "look at us, we're evil!" move to make with a group new enough they're still in the process of being hoodwinked.

For that matter, while I appreciated the target practice scene for the way it established that not everyone in the zombie poc is a crack shot, it seemed like a waste of ammo and something that runs the risk of attracting more walkers, but I suppose the Governor has bigger things on his mind.

Once Milton mentioned he knew the Governor pre-Woodbury, I started getting an older brother/younger brother vibe off them.

Speaking of, that was Milton burning the zombies, right? I mean, that's not even supposed to be that suspenseful of a question at this point, is it?

I'm glad that Milton is the one who prevented Andrea from shooting the Governor while she had the chance, rather than some nonsense about Andrea not being able to shoot him in cold blood or something.

As infuriating as I've found Andrea this season, it's a testament to how well this episode made me care about her struggle to get to the prison that I was so bummed when the Governor nabbed her right before Rick saw her, even independent of the dodgy gender politics involved. It's amazing how quickly you start to care about a character when she's doing something competent to complete a specific goal instead of lecturing people while ignoring the reality in front of her eyes.

That said, man, I bet Andrea wishes she could go back to standing naked over the Governor with a knife now, huh?
Newer Post Older Post Home
Posted by Austin Gorton at 11:00 AM