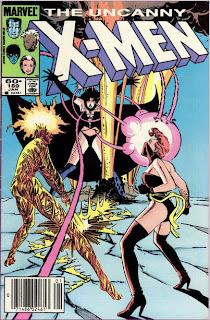 Plot
Rachel and Amara are visiting the Statute of Liberty. As Rachel gazes out over the city, she remembers her time as a Hound in the future, tasked with hunting down fellow mutants. Nearby, the X-Men have gathered on a cruise ship bound for Africa to say goodbye to Storm. At the South Street Seaport, Jamie Rodriguez chases off two dock workers trying to steal the necklace he found. The necklace tells Jamie that in exchange for his soul, it will grant him the world, but he resists the temptation and decides to destroy the necklace. Meanwhile, after some shopping, Rachel and Amara visit a recreation of the Roman baths at the Metropolitan Museum of Art. Suddenly, Rachel senses the presence of Selene, and rushes out into the street to see a limo pulling away. Rachel realizes Amara knows Selene as well, and Amara tells her that Selene killed her mother. The two women follow the limo to the Hellfire Club and sneak inside, dressing themselves as staff to blend in better.

Below, in the building's secret catacombs, Friedrich von Roehm introduces Selene to Sebastian Shaw as a candidate for the title of Black Queen. Sensing the presence of Rachel and Amara, Selene disappears, then proceeds to mentally enslave both girls, presenting them to Shaw as a gift. Unable to break free of Selene's control, Rachel enters Amara's mind and picks a fight with her. The ensuing confrontation causes Amara's power to manifest in the real world, breaking Selene's control. Amara attacks Selene, but Rachel realizes they're in over their heads and telepathically calls for help. The X-Men arrive shortly and defuse the situation, with Xavier and Shaw agreeing to part amicably. That evening, as Jamie Rodriguez waits for the subway, he's stabbed by a mugger, who takes the necklace. Once he does so, he bursts into flames, and the voice of Kulan Gath declares he is free to make the world his forever.

Firsts and Other Notables
Rachel is revealed to have been a Hound in her future, a mutant used by the government to hunt other mutants. In a flashback, she is seen wearing the studded full body suit that will become the inspiration for her costume in Excalibur, and sporting her facial tattoos (future stories will established that she normally uses her telepathy to hide them) for the first time.

Storm attempts to leave the X-Men as of this issue, in light of her power loss, though next issue will reveal she will be less than successful in that attempt. 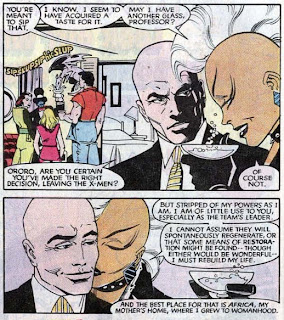 Selene appears dressed as the Black Queen of the Hellfire Club, the same attire once worn by Jean Grey, for the first time, a look that will become her default one, even when not directly working with the club. 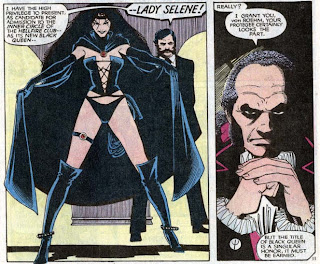 The events of the next two issues will cause Dr. Strange to cast a spell rolling back and altering time; as a result, the very end of this issue, in which Jamie Rodriguez is killed by a mugger, which releases the ancient sorcerer Kulan Gath, is technically occurring in an alternate timeline, though we don't know that yet.

The corner cover box has been changed so that it only contains heads of Storm, Nightcrawler, Colossus and Rogue.

When Amara and Rachel are at the Statue of Liberty, it's shown being repaired. I'm not sure if that's as a result of a story in another comic, or a representation of actual work that was performed on the statute circa 1984. 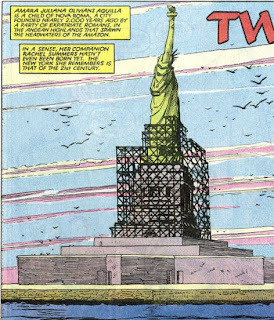 Steve Leialoha, who previously penciled, amongst other things, Spider-Woman #37 and #38, fills in on inks. He gives Romita's pencils a somewhat more angular and cartoonish look, though it doesn't seem entirely out of place alongside the Dan Green-inked issues.

The Chronology Corner
This one gets a little dicey - Illyana and Amara appear here following the story in New Mutants #22-25 and Rom Annual #3, yet Selene is shown being introduced by Friedrich Von Roehm to Sebastian Shaw and Tessa, despite having been inducted into the Inner Circle in New Mutants #23. It's possible that the Selene/Shaw scene occurs prior to Selene's induction while the rest of the story takes place after it, but as Selene's presence at the club forms the crux of Amara and Rachel's actions, that seems unlikely. More likely, Selene's audience with Shaw in this issue is a more private one (the rest of the club, present in New Mutants #23, is absent), intended to serve as her official bid for the title of Black Queen, having already been accepted into the Inner Circle (as Selene did not appear wearing the Black Queen garb in New Mutants).

Or, you know, Claremont and Nocenti were less than careful about all this, and ended up depicting a variation on the same scene in two different places...

A Work in Progress
We learn that not only was Nova Roma cut off from the modern world, but that, after its founding, it also cut itself off from Rome itself, as they had no knowledge of the rise of the Roman Empire. 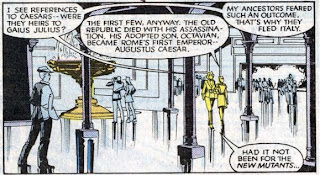 Storm mentions having developed a taste for champagne, having first drank it with Forge in issue #186.

As with Professor X, Amara is angry when Rachel accidentally reads her mind. 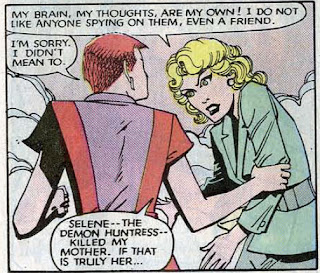 Rachel mentions that she learned burglary skills from Storm, presumably in her future.

Rachel appears, in a mental image of herself, wearing a costume, though aside from this issue it never appears again. 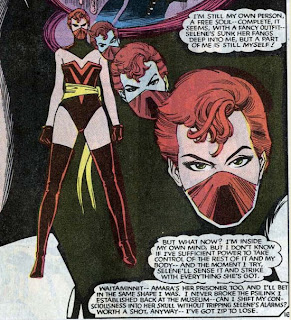 Amara is referred to as "Amy" by Rachel.

Once again, Colossus and Rogue burst through a wall to rescue Rachel, a pattern mentioned by Rogue.

Professor X reminds Amara that his students do not kill. 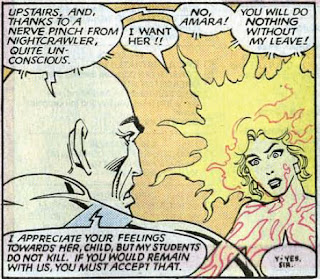 Shaw and the X-Men part ways in the wake of Rachel and Amara's attack on the Hellfire Club, with Shaw stating he has no quarrel with the X-Men at this time. 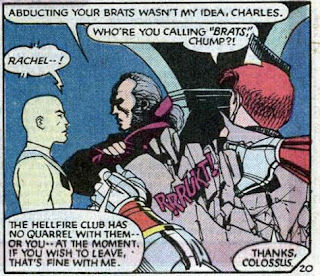 Rachel is able to telekinetically alter the clothing of the X-Men, just as Jean Grey did as Phoenix, though the effort takes considerably more out of Rachel. 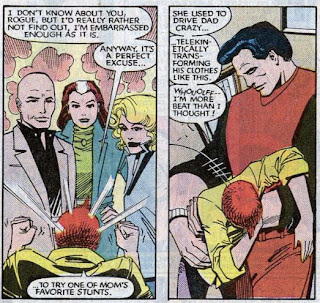 I Love the 80s
In an eerily prescient moment, Rachel mentions the destruction of the World Trade Center as occurring in her future. 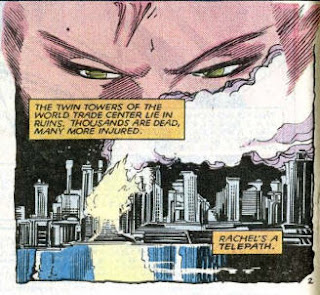 Kitty and Wolverine's absence is once again noted (along with a helpful footnote pointing readers to the Kitty Pryde and Wolverine limited series). The absent Kitty is somewhat awkwardly referred to as "Kitty Pryde" by Professor X. It's almost as though he's aware of the possibility that someone ignorant to the lives of the X-Men, someone who perhaps is checking in on their adventures for the first time, might be overhearing the conversation and would be confused should he refer to his absent student by the far more logical and simple "Kitty"....

Jamie Rodriguez is watching a portable "Watchman" TV while waiting for the subway when he's attacked. 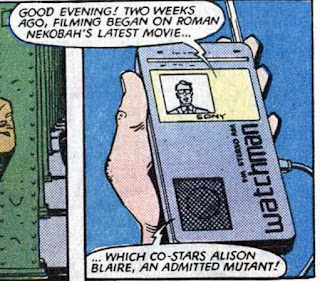 Like a Phoenix From the Ashes
Tessa notes the resemblance between Rachel and Jean Grey. 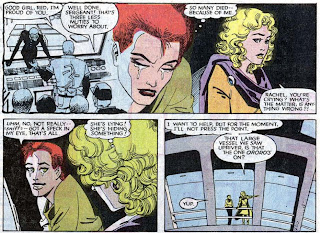 Human/Mutant Relations
Jamie watches am anti-mutant news report motivated by the events of "Dazzler: The Movie". 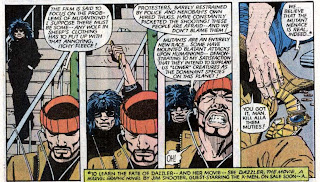 For Sale
There's an ad for the Marvel Try-Out book in this issue, essentially a contest run by Marvel to help identify new up-and-coming talent. The book promised that the winners' work would appear in a future special issue of Amazing Spider-Man, and though that issue never actually saw print, the winner of the penciling portion of the contest, Mark Bagley, would go on to become a superstar artist at Marvel, with a lengthy and definitive run on first Amazing Spider-Man and then Ultimate Spider-Man, amongst others. 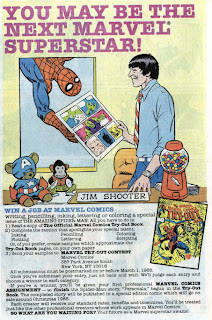 Presumably, beating this game involved more than just not drinking the water. 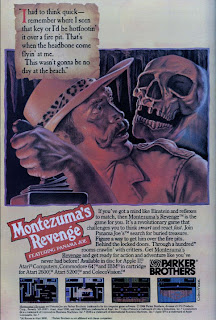 Bullpen Bulletins
John Romita Jr. is named Marvel's "Hunk of the Month" in this issue. I don't believe this ever becomes a monthly thing. 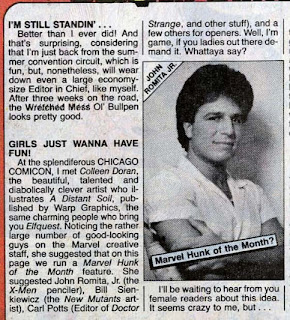 Teebore's Take
This is a rather odd issue. Structurally, it fits with the "day in the life" vignette approach of this era, featuring a variety of subplots and character moments, including Storm's apparent departure from the team and more information about Rachel's background alongside a done-in-one plot that stands alone while still connecting to previous and forthcoming issues. Yet that plot mainly involves Magma, from New Mutants, and Rachel. The latter, at least, is one of this book's supporting characters, albeit a relatively new one. Magma, however, would be totally unknown to any readers at the time who weren't also reading New Mutants. And with Uncanny still the senior and better-selling title, there certainly were plenty of readers in that boat (though it should be mentioned that if you were/are reading both titles, Claremont's growing comfort in sharing characters and plots between his two X-Men titles is a lot of fun, and adds to the feeling of it all being one large narrative tapestry).

While the New Mutants as a group and many of their members have at least been mentioned or appeared in previous issues, Magma had not. Claremont gives readers all the necessary info to understand the character (she's from a hidden city based on ancient Rome, has volcanic powers, Selene killed her mom, etc.) and pairing the two young women together makes thematic sense (both are fish-out-of-water struggling to understand a world that it is strange and new, and both have a personal beef with Selene) but I imagine it must have been terribly difficult for readers unfamiliar with Magma to really care about her past with Selene. While Rachel's vendetta is far less significant (Selene killed some random dude who was nice to Rachel), at least readers of X-Men saw that happen; here, they are merely told about Magma's vendetta with Selene, and as a result, it lacks emotional weight. Couple that with the fact that Rachel, who is still a rather underdeveloped character whose defining characteristic at this point is getting upset that the world around her is different than her past, is forced to carry the narrative, leaving the rest of the X-Men to literally burst through a wall to save her at the last minute once again, and the vast majority of the issue becomes rather unsatisfying.

Next Issue
Tomorrow, its more "fun" with Cloak and Dagger in New Mutants #24, and next week, one of my favorite stories kicks off in Uncanny X-Men #190, as Kulan Gath remakes the world in his image.
Newer Post Older Post Home
Posted by Austin Gorton at 11:00 AM