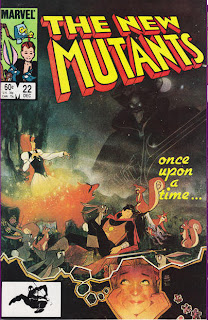 In a Nutshell
Rahne writes a fairy tale story.

Plot
In the Danger Room, Nightcrawler works on agility with Sam, hoping to help him become more maneuverable while flying. As Sam practices, Nightcrawler reaches out to a watching Rahne, hoping to help her see that he shouldn't be judged by his appearance, but frightened, she runs off. Rahne rushes past a sparring session between Colossus and Roberto. Roberto is suddenly filled with rage, his hands becoming claws, and he lashes out at Colossus, making the older mutant feel like he's come down with the flu. In one of the school's laboratories, Rahne watches as Professor X and a newly-arrived Moira MacTaggert study the alien Warlock. She then visits Dani, who is on the phone with her parents, but Rahne takes off before Dani finishes, leaving Dani to worry about both Rahne and Roberto's recent edginess. 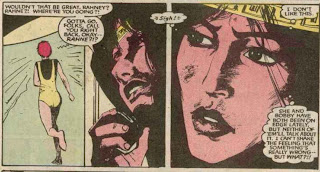 Meanwhile, in New York, Selene visits the jewelry store of Friedrich von Roehm, one of her priests, and asks him to locate her a residence where she can use her powers in safety while having access to wealth and influence. Von Roehm knows just the place: the Hellfire Club, where Emmanuel DaCosta, Roberto's father, is preparing for his initiation into the club's secret Inner Circle. That evening, back at the mansion, Rahne writes a story about an enchanted princess named Alystraea, who is forced to journey into the city to free her beloved prince from a shadow spell cast by the wicked Silver Sorceress. In the city, Alystraea confronts the Silver Sorceress and her companion the Black Baron and forcibly takes from her a necklace containing all the souls she's stolen. That evening, Rahne falls asleep in her bed, holding the same necklace as the one in her story.

Firsts and Other Notables
Following her appearance in Uncanny X-Men #184, Selene makes her return to New Mutants, now in New York and seeking out a base of operations, which brings her in contact with Friedrich von Roehm, one of her high priests, who makes his first appearance in this issue. Roehm will eventually introduce Selene to the Hellfire Club, and become the Black Rook of the Inner Circle. Apparently a regular human, Selene will eventually trigger a lycanthropic transformation in him. 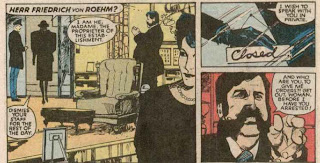 As with issue #21, this issue contains three pinups featuring Xavier's notes on Rahne (he hopes she realizes her potential), Dani (he notes that she's as good a leader as Cyclops was at her age) and Amara (he's impressed at how quickly she's adapted to the modern world, and believes her intelligence may rivals Kitty's). 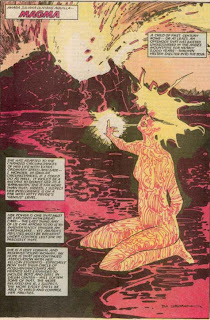 The Chronology Corner
The X-Men appear in this issue following Uncanny X-Men #188 and Marvel Team-Up #150, and the entirety of this story (which runs through issue #25), occurs between X-Men #188 and #189.

A Work in Progress
Sam says he's a little afraid of heights, the irony of which isn't lost on Nightcrawler, but moreover, he's really scared of failing. 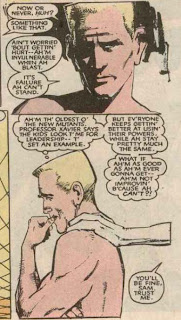 Rahne has not warmed to Nightcrawler, calling him a demon and worried that if he's actually a decent person, than it could mean everything she was taught was wrong.

Colossus attempts to teach Roberto how to properly utilize his strength, given that he's not invulnerable like Colossus. 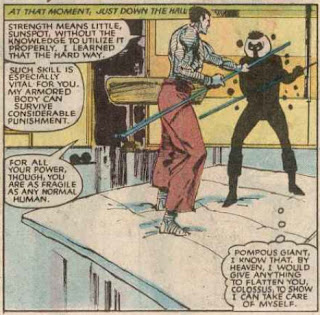 We learn that Dani's parents are back in Colorado.

Roberto's father Emmanuel is in New York, being inducted into the Hellfire Club. He comments on the period clothing, prompting an explanation from Shaw. 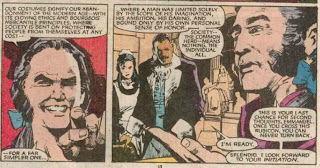 Artistic Achievements
The depiction of the fairy tale Rahne is writing, both on the cover and in the issue, bears a resemblance to the Disney house animation style. 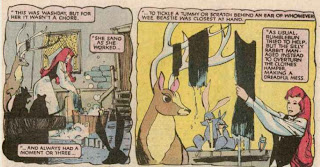 It's in the Mail
Another two page letter column, covering issues up to #15. It's noted that the feud between the New Mutants and Kitty has ended in the wake of the New Mutants rescuing Kitty from the Massachusetts Academy. There's also a response to a letter which discusses the characters' various religious beliefs. 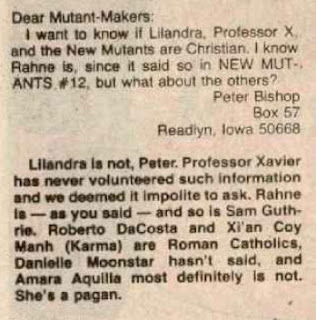 Teebore's Take
This issue ostensibly is setting up a multipart story (one I don't recall terribly well; I believe I've only ever read it once) that addresses the dangling plot thread surrounding Rahne and Roberto following their encounter with Cloak and Dagger in Marvel Team-Up Annual #6 . Really though, that setup is just barely hinted at in this issue (and only becomes more clear in retrospective), the bulk of it instead functioning as a patented Claremont "quiet issue" focusing on character development. It also offers up some of the strongest "students first" material yet, with the adult X-Men shown to be working one-on-one with the New Mutants in specific aspects of their training. Rahne's fairy tale, in addition to being the most obvious bit of setup for the continuation of the story next issue (we will see that the Black Baron and the Silver Sorceress represent Cloak and Dagger), provides Sienkiewicz with an opportunity to both ape Disney-style animation and cut loose from the restrictions of the more grounded school-based material. All in all, it's another strong example of the "day in the life" style narrative approach that Claremont is now applying equally to both books, and another great showcase for Sienkiewicz's artistic creativity.