American Dad: For Black Eyes Only 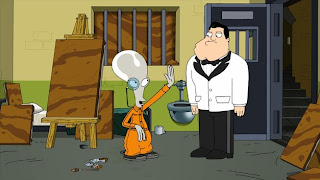 Like the August: Osage County theatrical parody earlier in the season, this was another episode that was more amusing for the way it parodied the James Bond/spy genre conventions than it was riotously funny. Which is fine; there were definitely some funny bits along the way (I particularly enjoyed the various Roger clones turning on each other and alternately killing or making out with one another), but in the end, the episode was mostly concerned with staying true to its parody.

Other Thoughts
The journey into (and then out of) Tearjerker's underwater prison was also pretty great, as was Tearjerker's exasperation about Stan trying to awaken memories in his wife's clone.

B: As long as you fall the right way, a volcano can never hurt you. Everyone knows that.

Black Villain: There won’t be open containers on my beach. Can’t change ALL the laws. 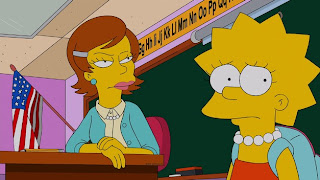 This episode is another in recent trend this season, in which the focus seems to be more on plot than humor. Which isn't too say there aren't jokes or gags along the way, just that they seem largely incidental to the unfolding of the plot. This episode featured two mostly original plots that were introduced and wrapped up within the time allotted, and while there were still a fair number of laughs to be had, the emphasis definitely seemed to be on telling Lisa and Homer/Ned's stories. This isn't necessarily a bad thing (though plot-heavy episodes tend to suffer from the show's fluid continuity), and The Simpsons has played with its storytelling and humor styles before (not surprising for a show this old), but it's still a trend worth noting.

Other Thoughts
I greatly enjoyed the notion of Bart as the nuclear option that could run just about any teacher (except for Krabappel) out of town.

When Ned was discussing his problem with Krabappel in bed, Mrs. Teebore said out loud what we were all thinking: oh yeah, I forgot they got married.

Principal Skinner: Meet your new teacher, Ms. Cantwell. Do not call her by her obvious nickname. Now I must meet with the new art teacher, Mr. Testiclees.

Homer: I hate unions. There’s a guy at the plant, caused three meltdowns, and he still keeps his job. 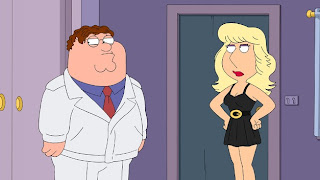 You know, the main plot of this episode (Lois works as a phone sex operator) wasn't bad, per se (though the conclusion was a little off), but when it follows a setup involving Peter and his trained falcon, it was pretty much doomed to come up short. As a result, the funniest bits of this episode came in the first ten minutes or so (including the sublime opening credits to an 80s TV show starring Peter and the falcon), and the rest of the episode fell flat. 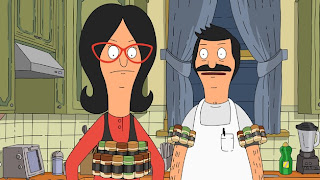 Oddly, enough both Bob's Burgers and The Simpsons this week featured one of its characters struggling against the bullying of a teacher. This doesn't do The Simpsons many favors (despite my relative enjoyment of that plotline), as any plot that goes up against one where Louise is allowed to cut close, especially when involves the denigration of Thomas Edison, Tina dressed as an elephant an an original romantic song by Gene, is going to come up short.

Other Thoughts
I hate to say it, but I think Linda's spice rack would probably be more effective, but I appreciated Bob's enthusiasm.

Loved the disapproving Tesla in the end credits.

I'm not sure why Fox is airing this as the last show in the block now, whether it's to try and boost its rating or that of The Cleveland Show, but I like it; it ends the night on the highest note possible.

Mr. Fischoeder: I'm just here for the monthly rent! I say 'monthly' because I think there might be some confusion about that.


Once Upon a Time: The Queen is Dead 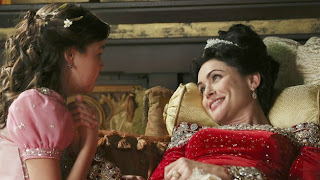 It's been no secret that I'm not a fan of the "Regina goes evil" plotline for a variety of reasons, so this episode already had an uphill road to climb, and it was made all the more infuriating by Snow's actions in the climax. I get that she's the eternally good character, who does the right thing no matter what, and I get that they're setting her up for some kind of Dark Snow turn as a result of what happened in this episode, but c'mon. Giving Cora that dagger was beyond stupid. How could Snow possible expect her not to kill Johanna once she had it? For that matter, I don't even think Cora ever made such a promise (not that Snow should have believed her when she had). The "Regina goes evil" plot is already bad enough for the way it forces a character to act a certain way because the plot says so; adding this in on top of that just makes it worse.

Other Thoughts
There were some less maddening things on the edges - that Neal has a fiancee was pretty obvious, but I would like to know more about Baelfire's post-Fairy Tale Land life, and the idea of Hook sailing his ship to New York (and everyone else sailing it back to Storybrooke) is the one of those absurd "fairy tale meets reality" bits that make this show so much fun.

Snow's scenes with Johanna at the beginning were also good - their sadness was palpable, and the fact that Snow can't celebrate her birthday without thinking about the death of her mother seems like the kind of sadly tragic thing that would happen to a person like her.

The flashback, while not entirely essential, was still more engaging than many of the recent ones, and the idea that Cora manipulated Regina into position as the queen was, while, again, not terribly surprising, still an interesting development.

I'm not sure why it took so long, but this was the first episode where I realized that not only is Cora the Queen of Hearts, she's also the woman in the original Rumplestiltskin story (the miller's daughter who had to turn straw into gold).

Gold hiding the dagger in one of the hands of the clock on the tower was a nice touch.

Regina: I was always the Queen. It you who added ‘evil’ to my name.


Community: Conventions in Space and Time 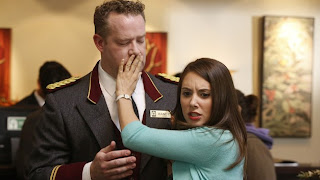 I know this was the episode, handed out on screeners before the season began, that started the critical gnashing of teeth over how the show isn't the same post-Dan Harmon. But I didn't think this episode was that bad. I'm not a huge Dr. Who guy (I know the basics of the premise, and that's about it. Never seen an episode), so Inspector Spacetime usually works best for me in small doses, but this episode just used the Spacetime stuff as the vehicle for the real plot as Troy and Abed grapple with their relationship. This wasn't the funniest episode ever, but it wasn't the worst, either, and there was still plenty to enjoy.

I once again spent most of this episode wondering if there was some revelation that Jeff and Annie were dating that I missed, but thankfully their status was made clear by the end.

I really hope the gag about Britta having to scare off the gaggle of guys following her around because they'd never seen a woman before was a subtle knock at Big Bang Theory and not a straight joke, because you're better than that Community.

Would it surprise anyone if I said I got a kick out of Luke Perry and Jennie Garth as Pierce-influenced American inspector and constable in the end tag? 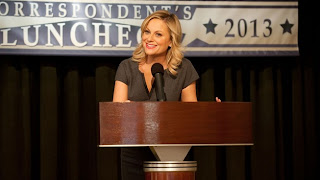 Watching this a week removed from "Ben and Leslie" and not immediately following it probably helped my consideration of it. It's a pretty standard episode of the show, establishing Ben's, and, to a lesser extent, Andy's, new direction and furthering the ongoing "Ann wants a baby" story, and all that is as pleasant and funny and enjoyable as we've come to expect from the show. But I can imagine it likely would have paled in comparison had I watched it immediately after the sublime and superb "Ben and Leslie".

Other Thoughts
This episode was directed by Nick Offerman, which is neat.

Loved Donna and Leslie using midi-chlorians to skunk out the email hacking, though I disagree with Ben's assessment of Episode I (not that it stunk, but that it almost ruined the franchise - it made, like, a billion dollars and its sequels were guaranteed to happen no matter what. It never put the franchise in jeopardy).

The cold open, in which Ben and Leslie hand out gifts to everyone after their honeymoon, was pretty much "Parks and Rec in two minutes", a great presentation of each character in brief.

Perd Hapley: The story of this situation is: it's extremely personal. 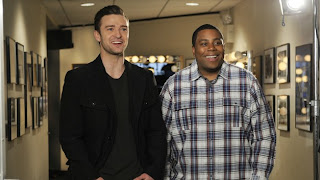 It probably doesn't speak well to the state of the show that it takes a returning (and well regarded) host to pull the show out of its winter doldrums, but hey, at least they didn't screw that up! Justin Timberlake's return wasn't quite the mindblowing spectacular many were expecting, but it was still without a doubt the show's best episode of 2013. Since Timberlake can't host every week, we can only hope that some of the energy from this episode is still lingering after the Easter break.

Other Thoughts
Missing five timers (either in person or via a reference) include Buck Henry, Eliot Gould, Bill Murray, Christopher Walken, and Danny DeVito.

Whenever a returning host returns, especially one who has hosted as often as Timberlake, the fear is that the episode will just devolve into a rehash of that host's greatest hits. The game show sketch that opened the episode was a nice way to avoid that while still giving people what they want, by featuring one of the host's recurring characters but in a different sketch than usual. Bobby Moynihan (who was also over the front half of this episode) also killed it as the clueless straight man.

That said, you knew we were going to get another of Timberlake's "something-ville" sketches, and we did. Thankfully, there's another variation to the songs and lyrics to keep it from being too tiring.

This episode actually featured a lot of recurring sketches, not just Timberlake ones. I enjoyed the original "Maine Justice" (and enjoyed this one as well), but I didn't exactly think it called out for an encore, and I was disappointed that Timberlake appropriated Jamie Fox's alligator motion, which was the highlight of the original bit.

The "Bling Ring" commercial was a hoot, especially the closing lines ("it's sine for your gine!").

A shorter than usual Weekend Update (likely due to the longer-than-usual cold open), with only one guest, but that guest was Stefon, and he gave us Donald Duck having a Vietname nightmare, so I'm not complaining.

Least Favorite Sketch: I think it's purely coincidental that one of the few original sketches was one of the worst, but "Tales of Sober Caligula" bit just didn't work.

Favorite Sketch: Got to go with the dating game show sketch.

Chevy Chase: Steve, I never see you anymore!
Steve Martin: I know, it’s a shame!
Chase: No, it’s on purpose.

Tom Hanks: Well done, well done. Go get yourself a beer, my friend.
Bobby Moynihan: I KILLED MY FRIEND!
Hanks: And I love Drunk Uncle!
Moynihan: Thank you!

Seth Meyers: I’m taking my serious girlfriend to Mexico.
Stefon: To kill her?