Another quiet week as we continue to catch-up on some older stuff, and talk about the finale of Top Chef season 10.

Once Upon a Time: Manhattan 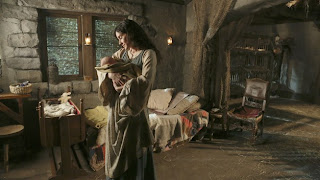 This show is always at its best when its forced to engage with its own mythology, and this episode was no exception. While Neal being Baelfire was the most obvious reveal possible (I mean, who else who could he be at this point?), that reveal was wisely gotten out of the way early, leaving the bulk of the episode to focus on the history between Neal and Emma, Rumpelstiltskin and Baelfire, and Henry and his birth parents. This led to some great scenes between all involved that were as good for what they didn't say as what they did say (showing a remarkable level of restraint on the part of the writers, I really appreciated that Neal didn't call back Emma's assertion that nothing good came of their relationship when he learned about Henry). The complicated, often bizarre history between these characters (wonderfully remarked upon in that brief scene between Charming and Snow in which they list off all of Henry's relatives) is far more engaging than random business about giants or fiery demon dogs.

Other Thoughts
Maybe I'm just a sucker for stories involving prophecy and the vagaries therein, but I really enjoyed this flashback as well. Learning what led Rumpelstiltskin to flee the battlefield and be branded a coward probably wasn't necessary, but it made a nice counterpoint to his search for Baelfire in the real world, and I love all that "it came true but from a different perspective than you thought" stuff.

I remain bored to tears and irritated, however, by everything involving Regina teaming-up with her mother (who apparently got a crash course in how to dress for Storybrooke from her daughter).

The whole "normal guy sees magic" business is a lot less compelling now that Regina is back to using magic for evil, because it seems like it would be a simple matter of wiping his memory at this point.

Seriously, I loved that scene between Snow and Charming. The crazy relationships between fairy tale characters (Snow White and Rumpelstiltskin share a grandson!) and their cursed selves and fairy tale selves (we don't do Thanksgiving in our land!) is one of the things that make this show so much fun, and it's nice to see the characters acknowledging and being aware of those relationships as well.

Holy hell, were those backgrounds during the scenes on the fire escape a terrible bit of green screening. They can't even get mundane city backdrops looking right.

Charming: It’s a good thing we don’t have Thanksgiving in our land because that dinner would suck.


How I Met Your Mother: Weekend at Barney's 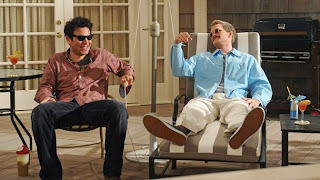 This episode was undermined by two critical missteps on the part of the creators: the repeated assertion that Ted is NOW serious about settling down (for realsies this time), when this entire show has been about Ted's search for a wife because he was ready to be done dating, and the notion that it's okay for Barney to lie to Robin because deep down inside, he loves her. The former, as has been mentioned before, is a pretty bald-faced rewriting of the show's history for very little gain and seemingly no good reason, while the later is yet another attempt to smooth over some of the ickiness inherent to the Barney and Robin relationship that, in the process, just makes things worse. I like the idea of Barney and Robin ending up together enough that I'm willing to look past the fact that their relationship is built on an elaborate series of lies and tricks propagated by a shameless womanizer, but it's really hard to do that when the show keeps bringing it up without offering an alternate take on the situation.

Other Thoughts
So Barney burns the Playbook (the real one this time) to prove to Robin he's done with that kind of stuff; what possible reason does she have to believe him, that there isn't just another copy floating around somewhere? It's literally exactly what he did before, and that turned out to be lie.

Watching Ted run Barney's plays was admittedly pretty funny, especially when it become clear that they all ended with "my penis" (presumably these were entry level plays) and that Ted was consistently saying it wrong.

The Lily/Marshall subplot was pleasant enough, with some decent bits and enjoyably bad puns, though I don't think what happened with the Skittles was enough to swear Marshall off them entirely, as SagetTed suggested. 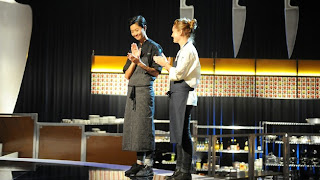 I really like this new format for the finale, which cut through a lot of the time filling BS (like watching the finalists pick their sous chefs) and got right to the heart of the matter. I also appreciated that the judging was very straightforward - each judge announced which of the two dishes in each round they preferred, the one with the most votes winning the round. It brought an air of mathematical process to the proceedings while still allowing for what is ultimately a subjective decision. That said, the one let down with the "win three out of five rounds" requirement is that a lot of the suspense was sucked out of the fourth round when it became clear there wasn't enough time left in the episode for a fifth round, meaning Kristen had to have won the fourth round (just because the event was filmed live doesn't mean we're watching it live; we still know they only have an hour to show the entire three hours of the challenge). I'd love to see the show do this style of finale again, but it would probably better to somehow show each round and the outcome in a different, less spoiler-y way.

Other Thoughts
This was a finale where no matter who won, I'd be a little happy and a little sad. I'm glad Kristen won, because she was the prohibitive favorite early on, and her victory speaks to the flaws in the judging process (because she obviously never should have been cut). At the same time, I really liked Brooke, and I feel bad she lost, particularly after winning so many of those elimination challenges.

In fact, it feels like Brooke was the team that won over a hundred regular season games, but then lost the World Series to an 80 win wild card team that went on an unbelievable run in the playoffs.

The other element to the finale I didn't like was the way all five judges didn't vote on each round, and it seemed totally random who Padma asked to vote each time out (at least as edited). I get that if the first three all vote for the same contestant, that contestant wins the round, but I'd still like to see all five judges, in the same order, cast their vote each round.

It was also nice to see all the former winners back, even if Ilan is still a douche that fills me with rage. I love that Michael Voltaggio was jealous of Brooke and Kristen competing in that environment, and I totally forgot about Kevin, the season 7 winner.

When the camera cut to Josie counting down, I yelled out "shut up Josie!"

I refuse to watch Watch What Happens Live, but the internet tells me that Sheldon won fan favorite. He probably wouldn't have been my choice, but maybe there's just a lot of stoners who watch the show. 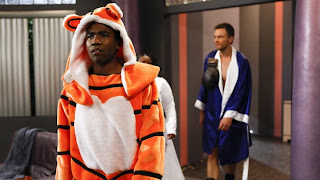 Even in the best of times, with an episode actually airing around Halloween, it would be tough to beat last year's Halloween episode, one of the show's best. So it's not a surprise nor much of a letdown that this episode was a step down from that classic. Still, it handled itself well, and was a good sign that the new showrunners have a pretty good handle on the characters already.

I loved that, in true Scooby Doo fashion, all of the various paranormal elements were easily explained away with outlandish scenarios.

Pierce having the panic room installed the day Do the Right Thing opened was a fantastic gag.

Abed: I remember when this show was about a community college. 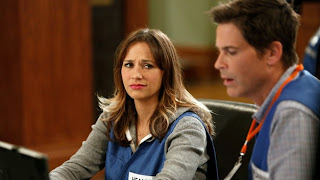 In a lot of ways, this was a text book Parks and Rec episode: Leslie needs to accomplish some gargantuan task, gets waylaid, and everyone else needs to step in and finish the job (appropriate enough, considering this episode, along with its conclusion, was written as a possible series finale, back before NBC picked up a back nine for the season and then continued to tank so thoroughly that it would be a surprise if they didn't bring back the modestly-performing Parks and Rec for another season). Only, in a nod to how far the characters and the show have come, when Leslie finally escapes from the emergency preparedness drill, she finds that her friends have stepped up and pulled off the gala just fine without her. It's a great moment, and were this the penultimate episode of the series, it'd be a great moment to go out on.

Other Thoughts
This episode was also a fitting conclusion to the Councilman Jamm/Lot 48 plot, a plot that stretches all the way back to the show's first episode (and while this would have been a fitting end to the show's overall narrative, I'm now thinking the series finale should involve, in some part, Leslie finally enjoying a completed park on lot 48).

So the comedic highlight of this episode was clearly "You're On with Ron". I would absolutely watch a show in which Ron Swanson dishes out no-nonesense advice like the fact that thinking your house is haunted just means you're lonely.

Andy's "become a cop" subplot also came to a (sad) end, but I'm curious to see where the newfound realization that he's something of a savant when it comes to memorizing things (something that's been established before) leads.