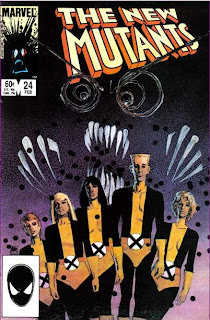 In a Nutshell
Professor X attempts to cure Roberto and Rahne.

Plot
The horribly transformed Roberto begs Moira MacTaggert to run before he consumes her, but Moira refuses to abandon the unconscious Xavier. Just then, Rahne enters the room and transforms into a beautiful woman, who is able to generate a light that sates Roberto's hunger and returns him to normal. But when Sam and Dani burst into the room, Roberto panics and teleports away with Rahne. Sam and Dani tell the awakened Xavier about their discovery of Cloak and Dagger's involvement in Rahne and Roberto's condition. They worry that their friends can't be cured, but Xavier says their first concern is finding them. Meanwhile, in Manhattan, Cloak and Dagger leave the hospital, worried the New Mutants will return and force them to take back their powers. In the Bermuda Triangle, Magneto apologizes to Lee for his ingratitude. Back in Manhattan, Roberto and Rahne arrive at St. Anne's, the church of Father Bowen. Roberto begs him for help, then collapses, unconscious. 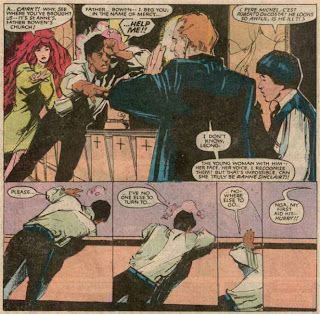 At the Port Authority bus terminal, Cloak worries that he and Dagger won't stay friends now that they're no longer connected by their powers, then gets angry when he's unable to stop a drug dealer from targeting nearby kids. Back at St. Anne's, Rahne uses her power to go inside Roberto's shadow mass and retrieve Colossus. When she returns to the real world she finds her teammates waiting for her, Xavier having located them using Cerebro. Back at the Port Authority, Cloak and Dagger leave the bus station, arguing about whether or not they have a responsibility to help Rahne and Roberto. Back at the church, Xavier and Dani combine their powers in an attempt to learn more about Rahne and Roberto's condition. Illyana begins to suspect the problem is demonic in nature, and teleports them to Limbo in an effort to use magic to help them. She's unable to do so, in part because Rahne resists the dark magic. Illyana returns them to the church, and is admonished by Xavier for her rash action. Just then Cloak and Dagger arrive, willing at last to help.

Firsts and Other Notables
Cloak and Dagger's guest appearance from last issue continues, and Rogue makes an appearance as well.

It's revealed that Karma's younger siblings, twins Leong and Nga, have been in the care of Father Michael Bowen, a priest who, in one of those Claremontian coincidences, also happens to be Dagger's uncle. 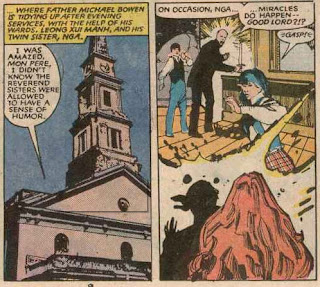 The Chronology Corner
Rogue appears in this issue and the next between Marvel Team-Up #150 and Uncanny X-Men #189.

New Mutants Annual #1, the events of which are considered to occur prior to issue #22, was on sale at the same time as this issue.

A Work in Progress
Magneto apologies to Lee, and Lee wonders if its the first time he's ever apologized to a human. 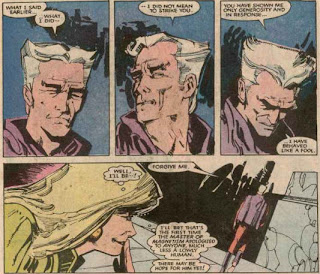 Professor X admonishes Sam for wearing a tattered Lila Cheney tank top, telling him he expects his students to dress more respectably in public. Rogue, however, is a fan, of both the clothes and Lila's music. 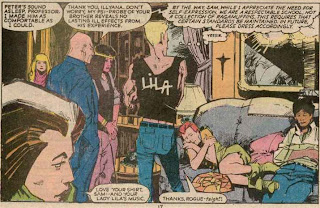 The demon part of Illyana is uncomfortable inside the church. 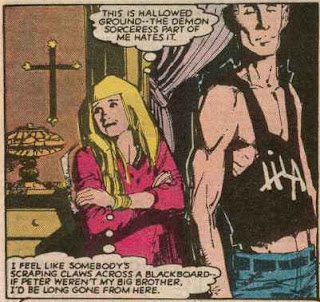 The darkness emanating from Roberto is compared to the Shadowbeings from Uncanny X-Men #188.

Illyana's armor continues to grow, much to her continued bewilderment. 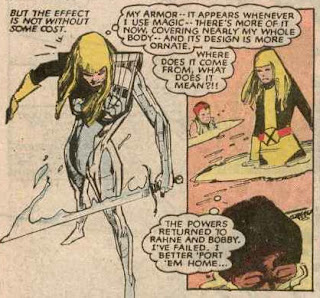 Claremontisms
In the opening narration, Roberto is described as having "strength that belies his build".

Illyana uses her Soulsword in this issue, though Claremont thankfully changes up his description of it.

Young Love
While trapped in Roberto's shadow form, Colossus hallucinates the evolution of his love life, as he passes up Kitty for Zsaji only to have Zsaji die, making him wonder if he's destined to be alone. 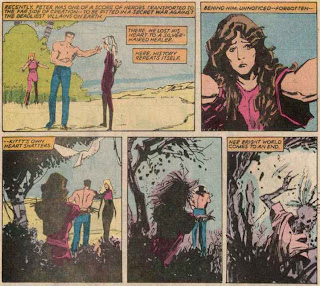 Rogue describes Lila as "Sam's lady" (the term itself is also something of a Claremontism).

They're Students, Not Superheroes
Though involved in the efforts to help Rahne and Roberto, the present New Mutants very much work under the guidance of Professor X, with Dani allowed to use her power only with Xavier monitoring her, and Illyana admonished for rashly taking Roberto and Rahne to Limbo despite her good intentions.

It's in the Mail
The response to a letter in this issue reveals that the being who turned Dani's parents into the Demon Bear is the same being as appeared in Uncanny X-Men #188 and stole Naze's form, which later stories will reveal to be the Adversary.

Teebore's Take
Last issue, I mentioned that this story was starting to feel stretched out and padded. This issue officially puts it over that edge. Maybe I'm just not a big enough Cloak and Dagger fan, but I could have done without all the scenes (roughly a third of the issue) featuring them angsting over whether or not to help the New Mutants, before ultimately deciding, to the shock of no one, that yeah, they guess they will. And where the padding last issue at least provided Sienkiewicz a chance to have some fun artistically, there's not a whole lot he can do to make a de-powered Cloak and Dagger wandering the streets of New York terribly exciting or innovative. Even the scenes clearly designed to take advantage of Sienkiewicz's skills, Rahne's rescue of Colossus and Illyana's rash attempt to cure her teammates in Limbo, are relatively tame by the artist's standards, suggesting even he may be growing bored with the story.

Next Issue
Kulan Gath remakes the world in his image in Uncanny X-Men #190, and then we finally wrap up this Cloak and Dagger story in New Mutants #25.
Newer Post Older Post Home
Posted by Austin Gorton at 10:00 AM