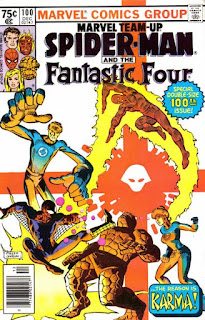 In a Nutshell
The first appearance of future New Mutant Karma

Plot
Spider-Man is possessed by an unseen figure and made to attack a party hosted by General Coy. The Fantastic Four are in attendance, and defend Coy against Spider-Man. When Spider-Man gets the better of them, Coy's nephew Tran secretly intercedes, breaking Spider-Man's possession. The FF take him to the Baxter Building, where a scan reveals evidence of the possession. Mr. Fantastic contacts Professor X, who confirms the presence of a new mutant in the city. The FF & Spider-Man track the mutant to a church, where they encounter a young woman named Xi'an. She tells the heroes of her childhood in and flight from Vietnam, and how her criminal uncle General Coy and her twin brother Tran have taken her younger siblings hostage in order to force her to work for them. It was they whom she was attempting to rescue using Spider-Man (who she believed to be a criminal, thanks to news reports). The FF & Spider-Man agree to help Xi'an, but when they attack Coy, Tran, who shares Xi'an's mutant ability, takes control of the Fantastic Four and pits them against Spider-Man. This forces Xi'an to use her power to counter her brother's, ultimately killing him. Accepting she shares some her brother's darkness, Xi'an christens herself Karma and is reunited with her siblings, as the FF & Spider-Man marvel at her power.

2nd Story
Storm is shot by an assassin but only slightly injured. She forces the shooter to tell her who sent him. In turns out to be Andreas De Ruyter, a man she fought alongside the future Black Panther as a young adult. She proceeds to the Wakandan embassy, reunited with Black Panther for the first time since they both were children. The pair discover De Ruyter is living in a mansion in Long Island. Breaking in, they're confronted by a massive robot with De Ruyter's voice. After destroying it, they discover De Ruyter dead; he had been psychically linked to the robot, and its destruction killed him. Marveling at how De Ruyter wasted his life on vengeance, the two heroes part, still sharing affection for one another following their time together as children, but accepting they can never be more than friends.

Firsts and Other Notables
The main story in this issue features the first appearance of Karma (aka Xi'an "Shan" Coy Mahn), who will go on to join the New Mutants as part of their inaugural class, though her involvement with the group will be spotty, at best, as she'll be written out of the series early on, and then again after a short stint with the group. As a result, she is one of the few living New Mutants to not "graduate" into X-Force (or another X-team) in the 90s, and will continue to make sporadic appearances (such as in the '94 "Child's Play" X-Force/New Warriors crossover and the '97 Beast limited series) throughout the decade, until the 00s, when she'll start to be appear more regularly in various series. 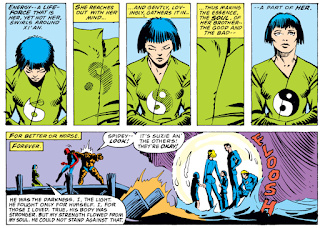 This issue also lays out Karma’s origin, from her childhood in Vietnam, getting left behind by her uncle and brother, getting attached by Thai pirates on her way to America, up to her uncle’s first attempt to use her younger siblings as leverage to get Karma to work for him. 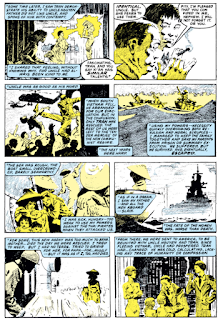 Karma’s evil twin brother Tran makes his first and last appearance, as Karma kills him in order to save Spider-Man and the Fantastic Four from killing each other. His death inspires her codename, as his darkness becomes part of her.

In addition to Tran, this issue also introduces Karma's evil uncle General Coy (who will maintain a presence as a third-tier X-villain for a number of years, battling the New Mutants & Wolverine, amongst others), and her younger siblings, the twins Leong & Nga, who will rarely exist as characters in their own right but whose well being will be Karma's primary motivation for most of her existence (this story introduces Karma working to save the twins from General Coy; barring the period between this issue and their disappearance during "Mutant Massacre" - with Karma herself missing in action during most of that time - finding/saving her younger siblings will pretty much be Karma's chief motivation in all her appearances). 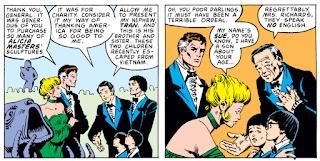 The second story reveals that Storm and Black Panther encountered one another as twelve-year-olds, forming a bond & affection for one another that lasts into adulthood. This story will later provide the justification for the Storm/Black Panther marriage in the 00s. 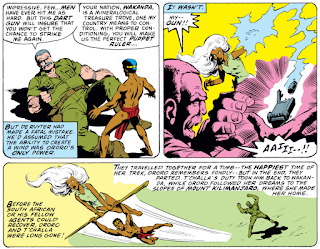 Creator Central
A pre-crazy Frank Miller, a month before his first outing as both the writer & artist on Daredevil, draws the main story in this issue, and is also credited as a co-creator, whatever that means (I don’t think he’s considered a CO-creator of Karma). He and Claremont will, of course, later team-up for the seminal Wolverine limited series.

There’s also a note in the credits thanking Ithacon ‘79 for the inspiration - presumably a comic convention at which the creators involved hatched the idea for the story.

The second story comes from Claremont & Byrne, who, in addition to their long run together on X-Men, also had a run together on this series about 40 issues earlier. This issue was on sale around the same time as X-Men #140, so it made it out just before their partnership came to an end.

A Work in Progress
Continuing the trend of the X-Men doing more training and new mutant-detecting in their guest appearances than their own book, when Reed calls Xavier he’s supervising a training session, and Xavier says he was just about to check out the new mutant presence Cerebro detected (that is Karma). 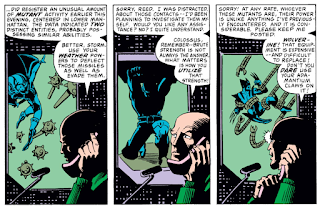 At the end of the first story,  Mr. Fantastic teaches everyone what “karma” means. 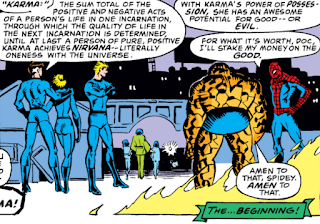 Storm picks a door lock; always nice to see her using those skills. 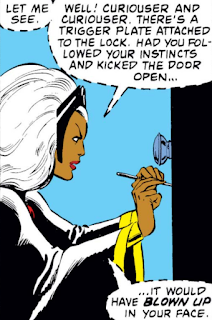 Storm notes that Professor X mind-wiped the assassin who attacked her in order to protect the existence of the X-Men, something he should probably be doing more often to that end (and maybe we should assume he has been...).

Later, Black Panther assures Storm that he used his Avengers Priority status to keep her involvement out of the official report. 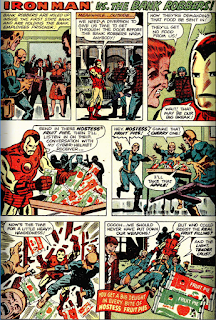 Austin's Analysis
Chris Claremont is known for rarely letting a character he creates or writes for an extended period of time waste away in comic limbo, but even given that, it seems pretty clear that when creating Karma for this issue (in what is, essentially, a fill-in story, at least for him), he did so with the intent of using her somewhere down the line. It's possible the seeds of the future New Mutants book were already growing in his head (it would be a few years before the series would launch, but Jim Shooter was already pushing for a second X-book, and Byrne was sketching out ideas for potential characters), but regardless, he presents Karma here as a fully formed character, with an extensive background (her deeply tragic & disturbing childhood in Vietnam & flight to America), an arch-enemy (her uncle General Coy), a specific goal (protect her younger siblings) and a character arc (learning to  balance her evil twin brother's darkness with her goodness to become a more effective protector/hero). As much as the Fantastic Four & Spider-Man are involved in this issue, it is very much the brand new Karma's tale, from top to bottom.

The second story is much more slight (especially before it became used as the justification for the dubious Black Panther/Storm marriage) but still kind of fun, mostly for being a somewhat overlooked Claremont/Byrne story. There's some (most likely unintentional) casual racism at work in the idea that two of Marvel's black characters (out of not that many) of course ran into each other in Africa as young adults (because Africa, the continent, certainly isn't huge...) and, in contrast to the main story (which is clearly positioning Karma for something in the future) it's not entirely clear what the point of the story is, but it's tough not to enjoy a little more Claremont/Byrne goodness. All in all, it's a fun, jam-packed celebration of the series' 100th issue, even if its ultimately more relevant to the X-Men than Spider-Man, the ostensible star of the series.