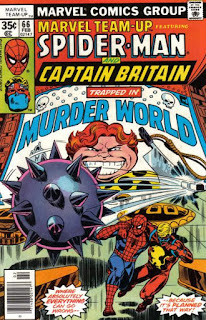 In a Nutshell
The first (American) appearance of Captain Britain, Arcade, and Murderworld.

Plot
Issue #65: After Peter Parker learns he's been assigned a new college roommate in the form of the British Brian Braddock, he shows him around town, while the assassin Arcade is hired by representatives of the Maggia to kill Braddock, whom they believe may be Captain Britain. Later that night, Brian spots Spider-Man leaving Peter's room and, believing Spider-Man to be a criminal, chases after him as Captain Britain. The two fight until Spider-Man is able to convince Captain Britain he and Peter Parker are friends, after which the pair is kidnapped by Arcade. Issue #66: Captain Britain & Spider-Man fight their way through Arcade's Murderworld, with Captain Britain trying to save his captured girlfriend Courtney Ross and Spider-Man figuring out a way into the access tunnels of the place. He is able to trigger an overload of the system, which the heroes use as cover to escape into the sewers. Emerging in the city, they learn from police captain Jean DeWolffe that the European Maggia who wanted Captain Britain dead have been taken out. Elsewhere, Arcade stands in the ruins of Murderworld, vowing to rebuilt it better than ever, then to invite Spider-Man for a rematch.

Firsts and Other Notables
Though active in his own series as part of Marvel's UK line for several years prior to this story, issue #65 represents Captain Britain's first appearance in an American comic. 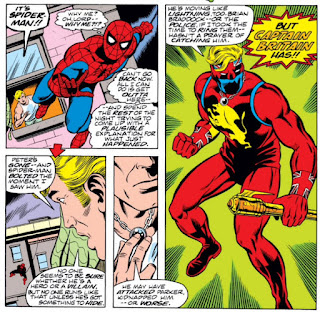 Arcade, who will go on to become a recurring villain mostly for the X-Men, also makes his first appearance in issue #65, along with his frequent associate, Miss Locke. Arcade is hired by an English branch of the Maggia (Marvel's mafia) to kill Brian Braddock, whom they consider is one of several people who could possibly be Captain Britain. They claim other assassins are handling the other candidates, but its never really clear why they need/want the more colorful, over-the-top Arcade for Braddock beyond "he's an American, and Braddock is in America). Obviously, the story needs Captain Britain & Spider-Man to fight someone more memorable than a run-of-the-mill assassin, but the Maggia don't know that. 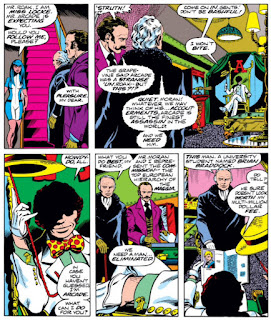 The other targets are protected/rescued by a mysterious woman who is never named or clearly seen. Most online sources cite her as being Sabrina Morrell (who will later appear in Claremont's Spider-Woman & X-Men as a San Francisco detective), but some believe she was meant to be Kate Fraser, whom Claremont had used in some earlier Dracula stories. Either way, her identity has never been officially confirmed. 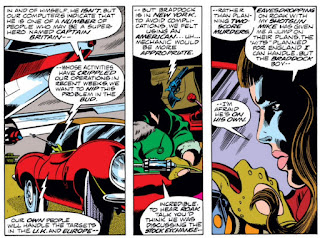 Arcade's Murderworld, his sophisticated amusement park-inspired means of killing people, aka the place "Where Nobody Ever Survives (Except For Everybody)" appears for the first time in issue #66. It is mostly pinball-inspired in this issue; later appearances will widen its inspirations. 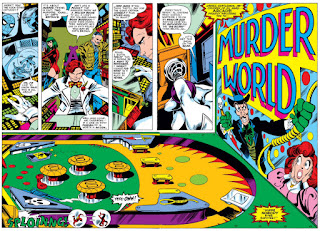 Courtney Ross, Captain Britain's love interest at this time, makes her first American appearance in issue #66 as well (she'd also appeared previously in the UK series, notably given her later appearances, with brown hair, as here). Her next appearances will be in the early issues of Excalibur, where she'll be killed and replaced by an evil alternate version of herself from another Earth. 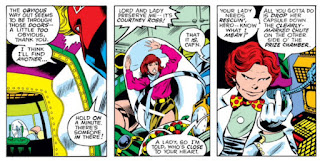 Arcade's other frequent associate, Mr. Chambers, appears for the first time in #66.

This pair of issues is somewhat notable for Marvel Team-Up, as the "team-up" character stays consistent across both issues - while there are occasions where characters stick around for multi-part stories, usually each subsequent issue highlights a different guest-star, whereas Captain Britain gets cover billing on both of these issues.

Creator Central
This issue is part of Chris Claremont and John Byrne's collaboration on Marvel Team-Up, which occurred more or less contemporaneously with the end of their collaboration on Iron Fist and the start of their partnership on X-Men.

A Work in Progress
Brian Braddock is setup as Peter Parker's new roommate in issue #65, but outside of a later story set shortly after this one, in Excalibur #53, that setup is never really referenced again. 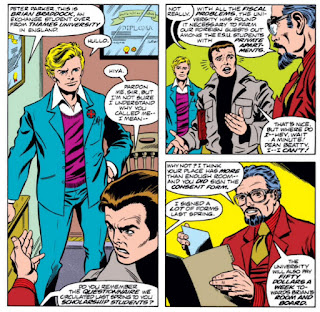 At this point in time, Brian "turns on" his Captain Britain identity via an amulet he wears around his neck, which can be seen when he's in his civilian garb.

Captain Britain is able to sneak up on Spider-Man because Spidey "ignored" the warning from his spider-sense. 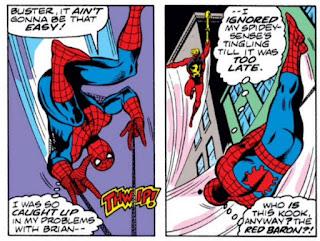 It's worth noting that Spider-Man is able to piece together that his new British roommate and the new British superhero in town are one in the same. Captain Britain, meanwhile, accepts Spider-Man's story that he and Peter Parker work together on photos, which is why he was spotted leaving Peter's apartment. 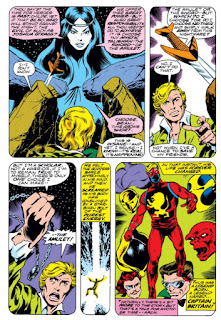 When Spider-Man & Captain Britain are captured by Arcade's garbage truck at the end of issue #65, the sound effect used is "sflanng". That same sound effect will be repeated when Arcade captures the X-Men in his next appearance, and the sound, overheard by Spidey, will tip him off to Arcade's involvement (not that said realization amounts to much in that story). 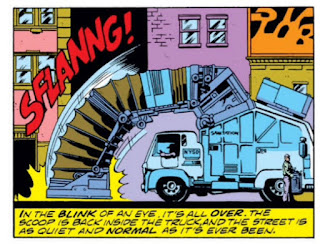 Similarly, Spider-Man manages to break into a tunnel in Murderworld, from which he's able to access some of the Arcade's systems, a maneuver that will be referenced in the next Arcade story. 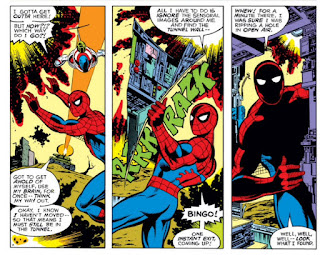 Spider-Man says that his scientific know-how is in biology, not electronics, which seems odd, given that he built his web-shooters from scratch (which, yes, probably shows more of a mechanical aptitude, but still).

It's unclear if Spider-Man & Captain Britian represent the first superheroes Arcade has put into Murderworld, but he does say that he finally has foes worthy of the place, suggesting they are, and that Murderworld's tagline was at least correct prior to Arcade sticking superheroes in it. 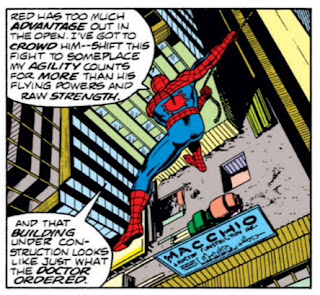 Artistic Achievements
At one point, Captain Britain finds himself neck-deep in water while in Murderworld, and Byrne draws the underwater portions slightly askew from the above-water, reflecting the way water bends light so that objects underwater appear to be in a different spot then they are when looked at from above water, a neat effect you don't see too often.

Austin's Analysis
In his debut appearance before American audiences, Captain Britain struggles to leave much of an impression, Outside of his relatively-unique scepter (which, as presented her, has somewhat vague abilities), his powers are fairly generic: flight, super-strength, durability. Outside of his costume, his defining characteristic (being British) isn't really present (it's hard to write a British accent), and even his costume is less obviously-British here as in later incarnations. As a result, it's Arcade and his Murderworld who, despite their inherent problems (their threat is diminished in each subsequent appearance, since none of the superheroes put in Murderworld can ever really die there), stand out as the most memorable parts of this story, and it's not a surprise that American audiences will see the return of Arcade before they will Captain Britain.

First appearances and impressions aside, this is a fairly routine team-up story that hits the usual beats (part one, hero misunderstanding fight, part two, heroes team up to take down the villain ), with Claremont & Byrne upping the level of craft for a better-than-average result: Byrne's art looks great even without Terry Austin inking him, giving the whole thing a modern-yet-retro vibe that suits its villain (Byrne's Murderworld is particularly garish in all the right ways), while Claremont does his usual thing of reflecting character in his scripting - his Spider-Man manages to strike the right balance between "down on his luck hero" and the seasoned veteran he becomes in his relationship with Captain Britain. It's a well-crafted story featuring a fun villain with a strong hook. It's just unfortunate for Captain Britain that he is, at best, the third most memorable thing about it.