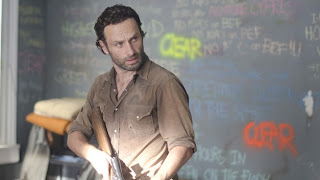 The idea of a side quest on this show, when its narrative momentum already usually exists somewhere between "stalled" and "nonexistent", wasn't the most exciting idea ever. Yet Rick, Carl and Michonne's otherwise innocuous supply run turned out to be one of the series' better episodes, thanks in large part to the fact that the character central to this side quest was someone we already knew, and because the episode used its narrow focus to its advantage.

Had this episode centered around a newly-created character, it would have likely been interminable, but by bringing back Morgan, not only did the show return to a seemingly-forgotten plot point from its very first episode, but it managed to tie Morgan's appearance into Rick's ongoing character arc, and the overall theme of the show. In Morgan, we have a reflection of Rick, the man he will become if he continues down his current path: friendless, his loved ones gone, barely able to differentiate the living from the dead. That this comparison went largely unstated showed a remarkable amount of restraint on the part of the creators, while the direction of the episode, particularly in the main scene between Morgan and Rick, entirely self-contained and filled with mid and close shots on the pair, was particularly well done. Here the focus of the episode paid off as well: the episode never strayed from the events surrounding Morgan's stronghold, no cuts back to the prison, no shots of Andrea being stupidly conflicted in Woodbury.

If the events in town been less engaging, this would have led to a nearly interminable episode, but thanks to the central confrontation between Rick and Morgan, as well as an entertaining adventure with Carl and Michonne, it wasn't. Going into this episode, I was dreading it, expecting a time-killing, water-treading affair. Instead, in turned out to be one the of season's, and possibly the show's, best.

Other Thoughts
I still can't decide how I feel about the "Carl wants a picture of his mom for his sister" subplot. On the one hand, it was kind of touching (and a nice nod to both the way life has changed in the zombie-poc and the fact that Carl isn't yet an entirely emotionless zombie killing machine) and once he stopped foolishly rebuffing Michonne, he was relatively smart in going about it. On the other hand, sentimentality seems like a dumb thing to risk your life for in this world. At the very least, I appreciated that Carl was doing this at a time when he could at least take care of himself; had this been the useless Carl of last season wading into a room full of zombies to get a picture of his mother, it would have been another infuriating example of the "Carl, get in damn the house!" meme.

I also appreciated the opportunity this subplot afforded for fleshing out Michonne's character. The conversation between Rick and Carl about her (while she could obviously overhear them) did a lot to engender sympathy towards her, as did her efforts to prove herself to Carl. Plus, it's not much, but at least now there's a reason for at least one person in the group to stick up for Michonne beyond "she's good with a sword". For the first time, Michonne feels like a character, and not just a badass with a sword.

The scene towards the end between her and Rick as they packed up the car was also really good, and surprisingly funny.

Morgan's zombie traps, complete with bait, were clever. I'd like to see more of that from the characters on this: ways to adapt to the world in which they're living.

I'm not sure if it's been established before and I just missed it, but I never realized the prison was so close (a few hours car ride, at least) to Rick's hometown.

The shot of Carl, casually leaning against the cafe doors as zombies go nuts against it, was pretty awesome.

This was a particularly strong episode for set design, between Morgan's zombie gauntlet, the writing on the walls of his stronghold, and the graffiti throughout the town.

For what it's worth, the writer of this episode, Scott Gimple, has been named the showrunner for next season, following Glen Mazzarra's departure after this season.

Apparently this episode ran longer than usual, as my DVR cut off the ending (despite being programmed to record an extra three minutes on the end). I made it as far as Rick, Carl and Michonne back in the car, having just driven around the crash where they got stuck on the way into town and seeing the red smear on the side of the road that was presumably the guy in the backpack that tried to chase them down at the beginning. If anything important happened after that, or I just missed another few seconds of silent contemplation before the screen went dark, let me know.

Speaking of that guy in the backpack, while it was sad the way he was so desperate for help only to be ignored, I wonder how someone like that, who clearly doesn't know that making a lot of noise is a bad thing, has survived this long. It kinda feels like natural selection, by way of the zombies, would have killed most of the stupid people/people unable to adapt to the situation by now, at least the ones wandering around in the open.

Though Morgan survived (thanks to body armor), Carl didn't know he was wearing it when he shot him, which, as far as Carl was concerned, made it his first non-zombie kill. If Rick is drifting dangerously close to Morgan territory, perhaps Carl is drifting dangerous close to his dad's. Perhaps that's the fate of everyone in this world, though Carl apologizing for shooting Morgan suggests there's a little hope for humanity yet.