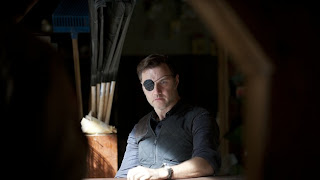 While not as tightly focused as the last episode, this one was still largely concerned, to its benefit, with telling one complete story, and continued to displayed a greater-than-average level of craft, with some fantastically acted and directed scenes (I particularly enjoyed the various shots that cast Rick in shadow, making him look like he had an eye patch as well, underlining the similarities between the two men). It also that managed to be effective and tense despite a relative lack of action. However, the episode was somewhat let down by a couple of distracting points.

First and foremost, little effort was made to establish why Rick didn't just shoot the Governor at any point during their discussion. Before it even started, once it become clear the Governor viewed the meeting as a surrender, as soon as he made the offer to leave them all be in exchange for Michonne. I fully endorse the idea that this group of people needs to be more welcoming to strangers and willing to risk themselves in the name of helping others, but as presented, there was simply no reason for Rick to not go into that meeting with a plan to eliminate the Governor once and for all.

Then, after the respective sides went their separate ways and its made the clear the Governor has no intent to honor his proposed deal, the episode wisely cuts to Rick, announcing to everyone that they're going to war, making it clear he isn't buying what the Governor is selling either. But then that's all undercut by the final scene between Rick and Hershel, in which Rick makes it clear he's contemplating the Governor's offer after all. It's a frustratingly idotic, Andrea-level move, one that suggests Rick is still dancing to the Governor's tune. And for as much as this season has been about setting up the Governor as a dark reflection of Rick in the hopes that Rick will emerge the better leader, the last thing we need to see is Rick consistently getting outfoxed by his opponent.

Other Thoughts
For the record, I can come up with plenty of sensible reasons why Rick wouldn't want to shoot the Governor when he had the chance, but it would have been nice if the episode had established one of them itself.

For that matter, why didn't the Governor just kill Rick, Daryl and Hershel and be done with it? He said himself he could wipe out the entire prison if he wanted. Why doesn't he? It's not Andrea (he's made it pretty clear he's done with her in any serious way). In the first half of the season, he had a desire to present a facade of righteousness to his people, but in the wake of Rick's attack and the death of his zombie daughter, that's seemed to vanish. He's not even hiding his true intentions from Milton anymore. David Morrisey is doing the best he can with the material, but this late in the game, the Governor is still far too much of a cipher.

I did appreciate that this episode began in media res, without any of the inevitable arguments over whether or not Rick should trust the Governor enough to meet him. The cold open was especially effective, once again proving that sometimes silence is this show's best friend.

I was expecting something really bad to happen all throughout that Glen/Maggie scene. First, I figured one of them was going to go out Axel style as a result of a strike carried out by the Governor's men while Rick was away, and then once they absconded into the loading dock, I figured something would happen as a result of no one being on watch. Instead, it seems like the show was giving them one of those rare moments of happiness without tragic consequences.

The various scenes of Rick and the Governor's lieutenants bonding were also handled well.

So are we to assume that Andrea has finally seen the light when it comes to the Governor, and that she was just going back to Woodbury to continue to keep an eye (pun intended) on him, and that perhaps her and Hershel even hatched some kind of plan? Or is that giving her too much credit?

In other "Andrea is dumb" news, she apparently told the Governor that Rick's baby might be Shane's. Did we even know she knew that was a possibility? And why in the world is she sharing idle gossip with the Governor?

As much as I'd prefer this show to be about the characters trying to build a society in the wake of the zombie apocalypse alongside more immediate conflicts, instead of just being about a different season long conflict that wraps up without significantly furthering their situation beyond killing off some characters or changing their venue, I really hope Rick's declaration of war comes to more fruition than Jack's declaration of war did in the second season of Lost.
Newer Post Older Post Home
Posted by Austin Gorton at 12:00 PM